I am preparing for my X-Carve which I plan to purchase and build in mid-March. I’ve done lots of reading of the forum, and have found a number of posts on dust collection. I’ve read all of them but I have a couple of questions that I haven’t seen addressed elsewhere.

First off, I plan to keep the X-Carve indoors. I am building an enclosure based on the design created by @coryalex and it’s coming along nicely. One thing I wondered though is if I use an actual dust collector (as opposed to a vacuum), the hoses are normally four inch diameter. For people who use real DCs, what is the recommended solution for setting up the hose, and reducing / attaching it to the router?

I know that you can get reducers, but I don’t know at what point I should do the reducing. Since I’m using an enclosure, it would be nice if I could use smaller diameter (2 or 2.5 inch) hose inside, and put the reducer right outside the enclosure (or perhaps mounted in the enclosure wall somehow). Would that reduce the effectiveness too much - meaning do I need to plan to run four inch hose all the way to the router?

Also, I’ve seen lots of mentions (both here in the forums and on the internet in general) about the Harbor Freight dust collector. With caveats, it generally seems to get good reviews (and it’s on sale again right now so that makes it even more attractive). Even though it’s on the large side for indoor use, I should have room for it. My concern is power draw. The specs state that it’s 20A, but most houses are only wired for 15A circuits. That seems like a showstopper to me. Comments?

I have the HF Dust collector with a 4 inch line and I reduced it to a 2.5 inch hose that connects to the dust shoe.

The larger the hose diameter the better the air flow and dust removal, so in my opinion 2.5 inch is as small as I would ever want to go.

I found a 2.5 inch universal reducer at Home Depot that had mounting holes so it can be bolted to the top of the dust shoe (just cut off the adapters on the bottom)

Then I made a 4 inch to 2.5 inch adapter out of half inch MDF (I have the file in Vcarve if you want it) 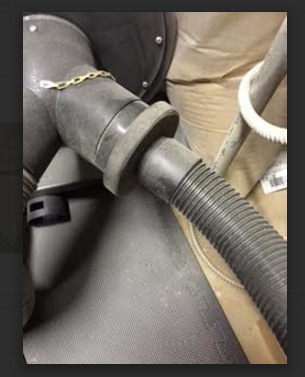 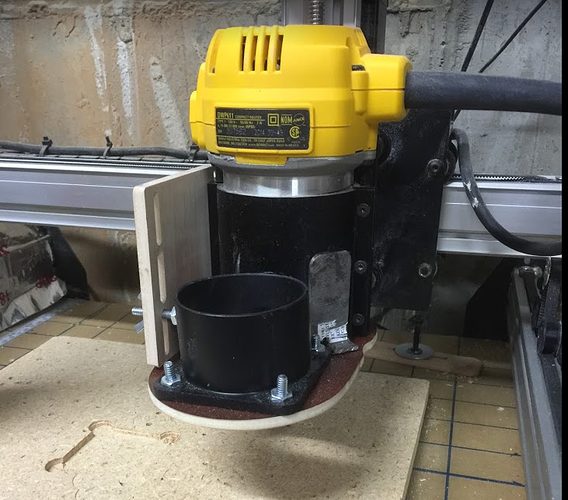 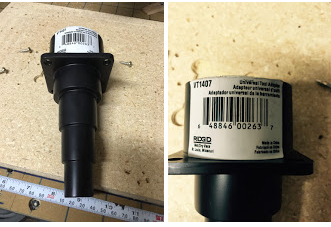 A dust collector doesn’t have to be drawing any air to run safely; for it to work it has to be drawing a reasonable amount of air in total. In total means from all of the sources, If you reduce a 4" hose to 2" you will not get a higher velocity of air. In fact, the total amount of air reaching the impeller will be much lower. Now, if you have another input to the DC open at the same time, the air flow through the 2" hose will most likely increase because the DC is pulling more air in total.

I have a 3hp dust collector and can tell the difference in air drawn from a small hose when I close off all but the small hose.

You are absolutely right Bill, at first I would close my other 4 inch port thinking it would draw more air through the 2.5 inch hose. When I accidentally left it open the 4 inch port open the first time I realized it was drawing much more air through the 2.5 inch hose. So now I always leave the other port open, I actually find that it pulling the ambient air into the other port also really helps reduce the amount of dust particles in the shop.

Yep, Allen, I’ve had similar experiences in the past. I wasn’t trying to say that someone shouldn’t go with a dust collector rather than a shop vac, but they have to be aware of some operational factors. Although I have a “big” DC because I have a full woodworking shop, I won’t use it for my CNC because of the cost of operating it for several hours at a time. The trade-off is how long a shop vac will last running on my CNC. If I were just starting a shop with the CNC being my first major tool, I’d probably opt for the HF DC.

I have the large harbor freight DC, and I plugged it into a 15amp power strip and it tripped when I turned it on. Luckily I have some 20amp outlets I installed in my shop, those work fine. So if you are not able to add a 20amp circuit to your electrical box I would avoid the big HF DC.

Be careful with the cheap blast gates. They will suck closed on their own.

Thanks for the feedback everyone! Given the current draw, it sounds like the HF DC is out - unless I opt to put the X-Carve in the garage (which is a possibility although I wonder about temperature swings and humidity).

If I stick with putting it indoors I may opt for one of the smaller DCs like maybe something from Grizzly. These smaller ones generally seem to draw around 9 amps, but they are also 2x (or more) as much as the HF one.

I suppose I could also start with a cheap shop vac, knowing that duty cycle will likely shorten the life. That would give me more time to research as well (and rebuild my cash supply ;-)). So many things to think about…

I also think I’m going to start with a shop vac setup. I have no space whatsoever for a large dust collector. I’ve been looking for a shop vac that is powerful, quiet, and can run continuously, but at this point I don’t think there is such a thing. One option is to purchase two cheap shop vacs, and cycle them. So, one shop vac would run 20 min at a time, and then would switch over to the other shop vac for 20 min allowing both of them to cool down. However, I am unsure how to wire this.

I run one shop vac inside a vented cabinet under my X-Carve for even long 8+ hour cuts and have not had any issues. I’m sure you could figure out a way to wire in a relay on a timer but it seems like overkill to me.

You’re probably right about it being overkill. So far I like the looks of this vacuum:
http://www.amazon.com/Ridgid-WD1450-14-Gallon-6-Horsepower-Vacuum/dp/B001MBADFI/ref=cm_cr_pr_product_top?ie=UTF8]

That looks like a great option… How long could you run a little collector like that? And would it produce enough suction? 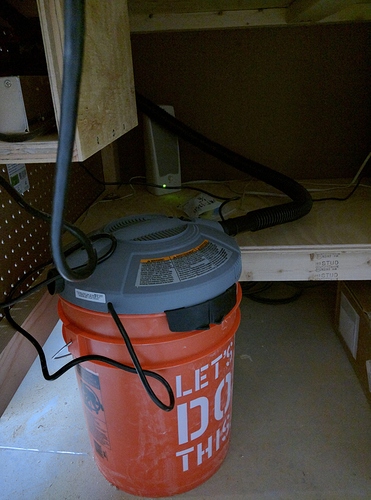 granted, my plan was to convert it into a cyclone setup but its been working so well i’ll probably put that project on the ‘later’ table.

It should also work pretty well paired up with a dust deputy: https://www.amazon.com/dp/B002GZLCHM/ref=cm_sw_r_cp_awd_0wpNwb8PW9XCH

That is another one of the dust collectors I’ve been looking at and it does look good. What is the reason / need to add the Dust Deputy?

The smaller Harbor Freight one also look promising. I’ll have to do more research on that.

The dust deputy collects most of the dust and chips instead of them going to the dust collector. This keeps the collector from filling up faster, increases the life of it’s filters, and it keeps the suction strong

I put a Dust Deputy cyclone on my shop vac, and it made a huge difference. Haven’t had to clean/change filter since I got the DD, and that was 8+ months ago. Definitely worth the investment. I plan on adding a Super Dust Deputy XL to my big HF dust collector in the future.