Anyone know where you edit the thickness of the z-probe puck now? I can’t find any settings other than turning z-probe on and off.

You should be able to go the the “Machine” menu option and go back through the machine setup process.

The thread below should definitely point you in the right direction.

Z-axis is offset by ~3mm Easel

During the Z-Probe setup, you can get to the Advanced Settings here… [Capture] Once there, you can update the Z-Probe Touch Plate thickness as shown below. You will need to use a set of calipers to ensure the thickness is exactly correct. [Capture] {:0) Brandon Parker

Sorry not seeing it. I can only edit machine, which brings up this screen. 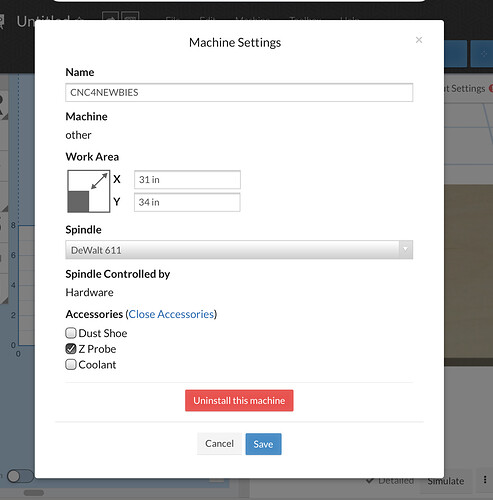 You ran back through the entire setup process? I would just remove the machine from Easel and start fresh. Easel should provide the ability to set up the thickness during the initial setup process.

@Ben-Saks, Maybe this is an opportunity for improvement since it is completely plausible that someone changes their Z-Probe (i.e. damages the original and gets a new one or simply switches to something different for some other reason). I know it would not happen often, but there have been several instances lately where people have inquired about where to change the thickness of the Z-Probe. Making it accessible without having to run through the entire machine setup would definitely be a plus in my book.

I think this needs some review as Ben mentioned.

It looks like when you go though the setup, you go into advanced settings where you can change the height measurement.

Hey @BrandonR_Parker haven’t heard from support or you.

Will deleting the machine mess up my bits and materials settings as I asked above.

Hey @BrandonR_Parker I assumed your were @Brandon_Cullum from Inventables, sorry about that. Should have read closer.

I can’t say whether deleting the machine would affect your saved Bits and/or Feeds & Speeds, but I cannot imagine that it would. As a programmer myself, setting Easel up this way would not make logical sense. I would presume that the Bits and/or Feeds & Speeds would be tied to your Easel account and not directly to a machine since one could conceivable use them on different machines. It is probably best to wait for someone from Inventables to answer if you are super worried about it.

They have a beta for multiple machines.so yes bits are tied to the machine and I assume if I delete the machine it will leave the bits, feeds and speeds orphaned as unknown machine.

Amazing the number of ex software developers, my husband was a developer as well.

Hi. @DebbieLee I am looking into this and will be back Monday with a better response once I confer with the Easel SE team. With the early access to Machine Profiles, you should be able to select any machine profile and apply it to any saved cut setting, so existing settings will not be lost.

@BrandonR_Parker that suggestion is great regarding the probe editing - makes sense for users who might want to set up different probing.

@DebbieLee Go to the full Machine Setup and when the steps guide through the connectivity test there is an “Advanced Settings” a little grey button, kind of hidden just above the blue next button, click that and you get the option to configure the size and other operational parameters

Just beware record and then verify your grbl settings if your using any settings that are not the x-carve stock OG ones… (like Z upgrade, etc) 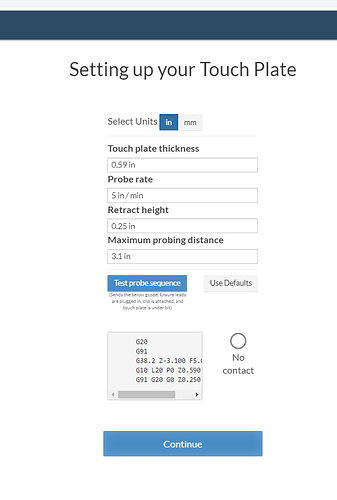 But I’ve got my own problem, my regular account won’t let me login to the forum says “contact site administrator” lol always something I guess

@DebbieLee Regarding “What happens to bits and cut settings” the machine type automatically changes to “Deleted” and you’d need to edit it after re-making the machine and re-assign all of them that got pushed to “Deleted” (Just don’t delete more than 1 machine at a time and this should be relatively easy to manage)
Also I found a little bug… regarding re-assigning from “deleted” to a machine IF there is only one machine created… if you run into this issue the simple work around was to just make a 2nd phantom machine and then it lets you assign it back to that first machine. 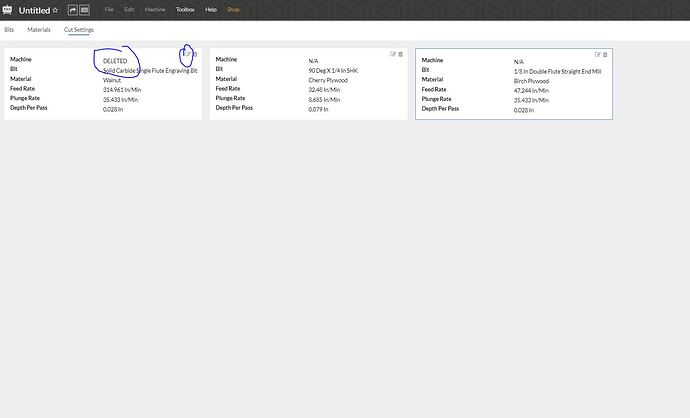 Thanks, be better if they have a much easier way to edit the puck thickness. I have around 50 I’d have to fix.

Please make editing the puck thickness easier. Crazy that you have yo uninstall your machine to edit. Mine cuts far too deep despite recording the exact puck depth; it cuts about 1.5 mm deeper…any suggestions welcome

Excess depth can be caused by a variety of reasons, not simply the puck thickness.
Was the workpiece surfaced and the z zero set directly atop the area being carved? (If it wasn’t surfaced and z zero set properly then the issue could be work surface not being parallel and thus z zero not set correct to the area being carved)
And what bit type was used? (An upcut causes pulling forces and will carve deeper than a downcutl How large (and thick)
Was the workpiece and was it properly secured from lifting up? Was the bit tight into the collet?

Then there’s the fact that Easel stores the puck thickness in a place that is rather easy to have erased and set to the 14.99mm default by mistake, Ive found no less than 5 ways to inadvertently cause easel to “forget” the custom probe thickness and the user will be none the wiser until they ruin a couple projects.

I don’t really know what you want more info about. . . like how I made easel forget my probe thickenss through various methods??

Or did you mean those other things that effect depth of cut other than jacked up probe thicknesses?

THAT, Seth, is very helpful. I had to clear the cache to get into Easel last time as it was locked up. I think that is why/how the z probe was reset. Although 14.99 is a lot different to 19.1 and it is only cutting 1.5/2mm too deep but only when using the probe. Old fashioned fag (cigarette this side of the pond) paper method cuts correctly.
I still would like to see a simpler method of resetting the probe puck height without having to go through the rigmarole of uninstalling and reinstalling the machine. A backward step sadly…