Hey Everyone,
I’ve had my X-CARVE for a few weeks now and this is the first real project I’ve made other than a test carve and some dog crate name tags. The project is a simple address plaque for my soon-to-be in-laws who retired and moved to Virginia two years ago (note that they are in love with Virginia and English Bulldogs)

Below is what it looked like immediately after being removed from the X-CARVE.

I used the beta for dual bits to cut this out, but I ended up having to perform some trickery and go back over it quickly since the roughing pass left some material that it clearly should have removed (i.e. … it had inches out beside it that was clear). That being said, after it was finished the project looked fantastic.

Anyway, without further ramblings here is what is looked like after the milling was complete; stain/ clear coat current in progress … 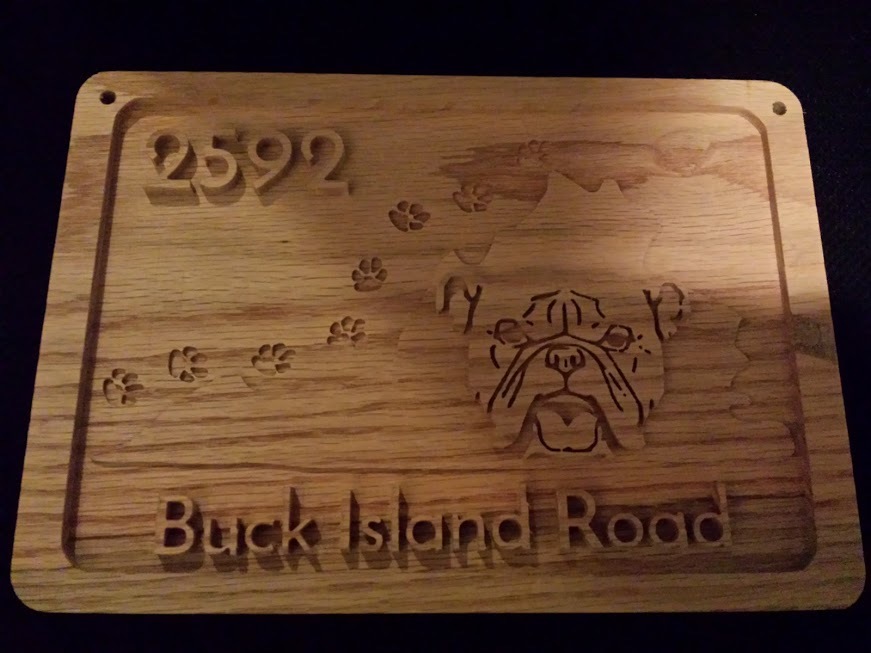 Thanks for showing this. Still on the fence in the decision process. Nice to see that the machine is capable of what appears to be sharp lines.

If it’s outdoors and the letters being as deep as they are, I’d worry about sealing it. Expansion / contraction may make those letters fall off after some time. I usually stick with recessed lettering and curve carve any raised letters. Nice job, though. It’s way better than my first real project :-). Heck, it’s even better than this weeks project

Yeah, I highly doubt it will go outside…maybe on their front porch which would not be in full sunlight. It will be thoroughly sealed as well. It’s just not big enough at 11" X 7.5" to hang near the road or anything so I am almost certain it will go on the mantle or hang somewhere indoors.

Good point. Oak is the easiest to split whether from contraction/expansion or that old splitting mall out in the wood shed.

Do you think the X-Carve could justify its space in more of a production environment if its use was limited to the light duty adornment type operations?

Depending on materials, mostly. I upgraded to the Dewalt and feel more confident it will hold up. If you are running for about an hour a day, it would probably last. 8 hours a day, you better keep it clean and inspected. There’s an X axis mod to stiffen it, and I would recommend that, especially with the Dewalt.

Thanks for that. I have toured a nearby cnc router manufacturer that puts out a turnkey solution starting at 12 grand. You could drop it off a tall building and probably not hurt it much. If I were knocking out widgets 24/7, theirs is a no-brainer. My use would primarily be doing fairly shallow artsy-fartsy stuff in various species of wood that would be cut to size, edged, and any other “hogging out” operations done on equipment more suited to the rough stuff. My equipment range runs from milling 36" by 18 foot logs down to a scroll saw, but I am not a wood carver or sculpter and have no frigging desire to learn. lol

Careful…you’re teetering on the brink of being humorous here…were you needing a shove?

You might take a look at some of the stiffening threads and look at how others have modded their machines for more robust work. Here is one impressive beast:

Welp, its happening. In the pursuit of rigidity, I'm building out my own X and Z axis. Will there be too much weight for the Y-Axis? Probably. I'll be using my heavily modified X-Carve to make all the plates and mounts that will be needed for this project. I will be editing this top portion as the project continues, updating the status and adding pictures/video as they're made. I want to keep the OP as a "current status" page with the CAD, and will post progress as replies. Status/TODO: As…

Yes, have been looking at the mechanical upgrades with interest. Time well spent. Most seem to be very common sense and cost- effective. I don’t really intend to tax an X-carve beyond its design limitations…not as a primary piece of production equipment, more as a niche tool for embellishments, adornments and personalizations that would not otherwise be economically possible. My impression thus far is that an X-carve would be adequate in that capacity. More so with the mods.

And possibly with v-carve pro from Vectric. The v-carving features alone are perfect for embellishments and such.