So my Easel Pro subscription expired and figured since I’ve been learning Fusion360 and use the tool paths exported from there most of the time - that now is the time I would look into maybe using a different grbl software.

I use macOS on an old 2011 MacBook Pro as my CNC computer and don’t particularly want to have to use parallels or windows. I have just started to research my options.

I see a few at first glance:

I’m sure there are more, but curious if anyone’s experience with all the different alternatives.

I don’t mind using easel, but would like to find an offline app that works just as well or better. I also would like to eventually get an xyz probe, and maybe be able to setup positions for different fixtures, etc.

Some random questions I have:

Thanks so much for your input and help! Much appreciated

You’re going to be real happy open builds. been using it for some time now.
talking about a happy camper when the campfire doesn’t go out.

Another Vote for OpenBuilds Control as the CNC Controller. Best CNC Software is OPENBUILDS CONTROL - Cool Features - YouTube
However just so you’re aware, the paid Pro part of Easel is only the design side, you could continue to use Easel Basic (non-pro) to send the Fusion360 gcode files to the cnc after your Pro account expires and converts back to Basic.

does the grbl software all need to home and does it work similarly to how easel does it?

It is recommended to home the machine before each use, especially with the X-Carve Pro seeing that it has a self squaring feature built in that only works when the machine is homed.
(Technically the term is Gcode Sender Software because. GRBL is the firmware that’s on the CNC, and the gcode sender does need to be grbl compatible, but kinda semantics, but wanted to clarify the term usage there)

are repeatable positions possible? I seem to sometimes hit “use last work position” just to have the machine not go where it should

IF “Use Last” isn’t working than the gantry was moved manually (by hand) between the 2 carve jobs.
IF you home before the first, and then again before the 2nd than the “Use Last” will be spot on.
That said, other gcode senders, like openbuilds, have built in “JIG Position” functions where the user can home the machine, move to a known position and save it as a semi-permanently (until saved over) position. This is useful when using a L fence OR when other Jig’s are used from time to time on the CNC but always registered to the exact same position. (2 positions can be easily used, and another 2 can be setup manually, but those extra 2 are a bit more complicated to setup, the default 2 are VERY simple within OpenBuilds as there are already buttons for setting the position and then for using the position(s) later on)

what features am I missing using easel pro vs these other softwares?

Well, Easel Pro only effects the CAD/CAM portion of the process, so IF you’re already using Fusion360 for the CAD/CAM than there’s not really ANY benefit with using Easel as the sender other than familiarity with the layout.

the easel driver will still be needed or no?

is there anyway to setup the controlling software so if it hits a limit switch it pauses or stops the milling?

Yes, Set $21=1 this will allow those limit switches to function as true physical limits.
The steps to see the current settings and to get to the page to make this change are here: X-Carve PRO Default Grbl Settings 2021 – His N Hers Handcrafted
you will need to send this command to change this setting:
$21=1

NOW I should mention there is ONE issue currently that might stop you from being able to use OpenBuilds Control with your specific model CNC.
During an update in early 2022 Inventables pushed a new grbl firmware to Xcarve Pro users through Easel. This update changed the machine’s Baud Rate from 115,200 (the grbl standard) to 5,600, which I suspect was either an error or for some reason having to do with Xcarve Pro having occasional data packet drops… Well OpenBuilds Control only works with 115,200 Baud rate, so you might be able to simply go into the USB port settings and change it to 115,200 OR you may need to call inventables and have them provide you with the last prior firmware which allows it to still run at 115,200 and then it’ll work with OpenBuilds Control like every other Grbl cnc. At least a handful of other Xcarve Pro users have reached out to Inventables support to have this issue corrected so that they can use OpenBuilds Control…

I’d make a plug here for CNCJS which is a web based CNC controller (and is free open/source); it has full 3-axis probing if you want, manual axis control, g-code console, digital indicators, etc. I have mine running on a small single-board computer dedicated to this (which I share the drive from so from Fusion or v-carve pro I push the g-code to the shared drive and then load it into cncjs (note you can even set up a watched directory so it is automatically loaded on upload):

I run a workbee from ooznest in the uk (openbuilds ?). It works really well from within easel but I always use UGS. I like the interface of the openbuilds control and hadn’t heard of cncjs but having had a quick look the interface looks good. The reason I have stuck with ugs and rejected all the others so far is that during the homing process it lifts the z axis then travels over the workpiece avoiding the possible destruction of clamps and the workpiece. Easel and openbuilds drop the z axis then travel , I’ve been woodworking some 30 plus years and it seems counter intuitive seeing some of the controllers doing this, especially if the router/spindle is running, you are not in control of something that can cause serious damage to machinery and or the operator. Does cncjs lift and travel or drop and travel?
Maybe inventables should look at this a bit closer, I know I should add a feature request but it’s not really requesting something new but to change something old, how many posts are on the forum about ruined clamps and workpieces?

Easel and openbuilds drop the z axis then travel

In my experiences this is not what happens. Easel gcode lifts to safety height first regardless of the gcode sender programs, this is a function of the gcode not the sender software.

It’s 100% definitely never lowered mine before moving into positron.

Thanks. So I’m clearly missing something if ugs is lifting over and the others aren’t. I suspect I need to change a setting/$ somewhere. Can you give me a pointer? Cheers

I think that if ugs does it when you click start to run the gcode than the others will do it the same. They are all sending the exact same file. Ugs isnt providing its own initial lift movenent, thats in the first few lines of the gcode thus its the same for any sender

I’m not in the workshop so I can’t check but have found a screen shot. this is definitely part of the machine control process and not the design g code. So the machine homes back right corner, work zero is front left. There are separate buttons on the interface for these two processes, return to home ($H) & return to zero. I can jog and reset zero then run the design. I have tried on and off with easel and briefly with openbuilds and I haven’t been able to re produce the lift and travel which happens with ugs. 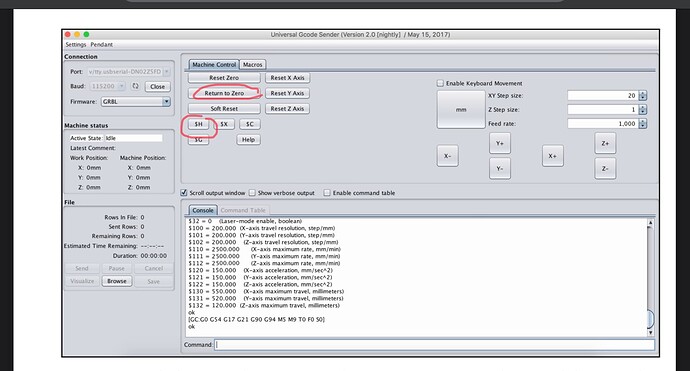 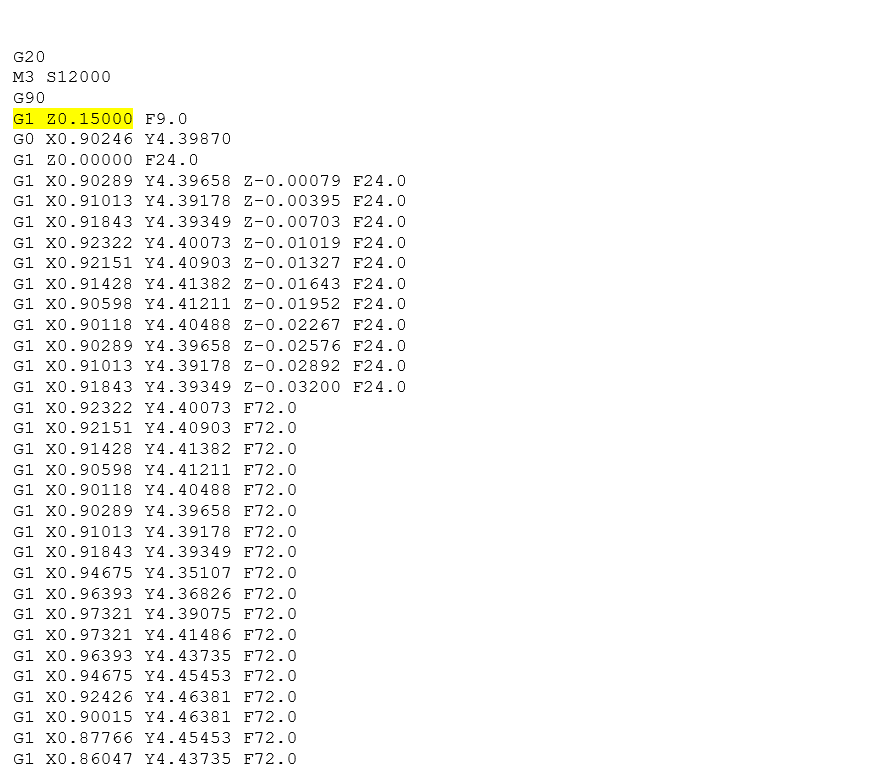 However, It appears that the “Return to Zero” you’ve got circled there in your post sends a series of commands, the first of which lifts the Z based on this setting here: 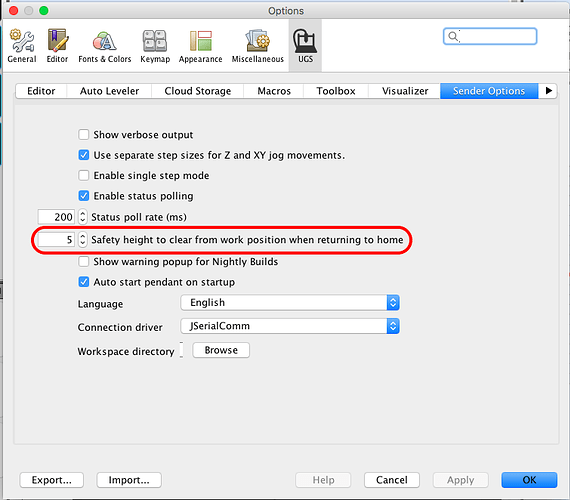 However there is a carrot at the right of that button in Openbuilds and I believe that one could click this carrot to gain access to those movement settings and apply a Z offset just like in UGS. So one could set that safe Z height to 5 in here and then the OpenBuilds button would work just like UGS does. 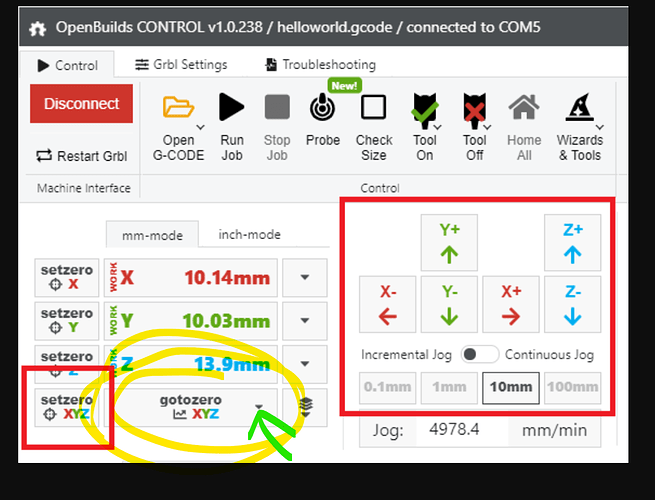 image1061×809 183 KB
(I’m away from my house so I’m unable to confirm that this setting exists by clicking the carrot, BUT I do recall seeing some settings there when I’ve clicked this carrot in the past)

IF that carrot doesn’t actually contain the setting for that Z offset when performing the “move to zeros” function, One Could copy the gcode that UGS uses and make a custom macro to perform the same movement.

(this is a pre-existing image of a macro setup, but performs the X,Y movement without moving the Z at all with this setting) 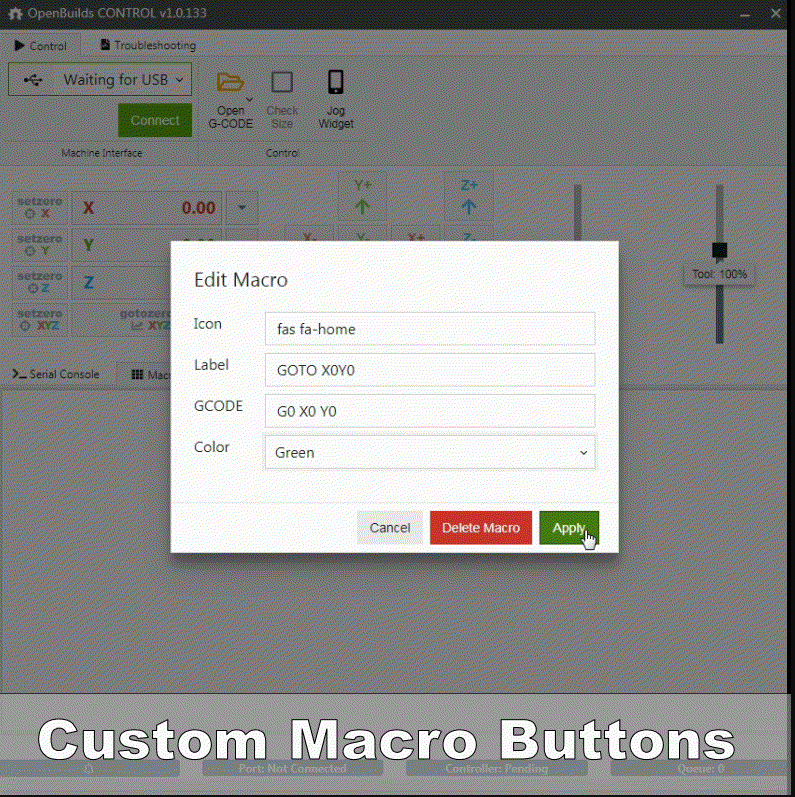 Regardless; I had interpreted the original comment incorrectly and that was my mistake, I apologize for the confusion caused by my not quite relevant prior replies.
And if UGS works better for you then I’m all for using what works for each users individual needs!!!

Hey Seth. Thanks for all that. I’m a believer in being able to understand your machinery so you can work and maintain it but this is getting a bit beyond a simple carpenter! I also found this in the installation/commissioning manual, where it refers to limit switches, so the lift and travel is linked to limit switches?.

image1920×488 101 KB
Don’t worry about missing the initial point, you got there in the end! I totally agree with your final point , if the process ain’t broke don’t fix it. However it’s good to have alternative s and what I’m struggling to understand is why inventables and the other developers would set up a machine control that works in the way that it does ,to me it’s a really bad option.
1 Like
Ken4 November 20, 2022, 5:29pm #12

Don’t get discouraged it’s a small learning curve. give it some time and you’ll be pro before you know it.

I think today is the day im gonna give open builds control software today. Wish me luck on a hopefully uneventful test.

Still researching trying to find a good (low cost) xyz probe that I can get quickly that will work with the xcp.

Well “homing” and the “Return to Zero” are 2 different functions and are indirectly related.