Home Depot and Menards are each facing a possible class-action suit over claims they deceived lumber buyers over board sizes by using nominal sizes. The plaintiffs are seeking more than $5 million.

So is this a case of gross stupidity, or just plain evil…

It makes just as much sense to say it’s a 15 inch round as it was cut from a tree that was 15 inches in diameter.

Brings to mind the story of the Emperor’s New Clothes.

Lawsuits like this have been brought before the court before. And have been thrown out.

A shining example of the legal system running amok.
I believe the origins of the sizing system began when a 2x4 was just that in its rough cut form which was commonly used for building. Just look at some buildings from the turn of the last century, (1899-1900)
If one were to measure the framing lumber it would come close to 2" by 4".

As time marched on, the industry demanded more uniformity and the practice of planing the material became the norm,but the rough sawn piece was still pretty close to full dimension.

In reading the article, the complaint states that the signage is misleading and does not state the ACTUAL dimensions.
If someone is naieve enough to be ignorant of what has been standard accepted practice for decades, they would probably be better off hiring a profesional.

But more than likely it’s jusst an attorney looking to make an easy buck. (or so they think)
It’s nonsense like this that causes the price of materials to keep going up since the retailers pass the costs associated with defending themselves on to the consumer.

Next they can go after hard drive manufacturers because I’m only getting 7.4 TB out of my 8 TB drive :).

I would like to see these places (and others) sell their wood by the board foot instead of the lineal foot. Problem solved

Next they can go after hard drive manufacturers because I’m only getting 7.4 TB out of my 8 TB drive :).

At least with your hard drive you actually get a drive that will store 8 TB. Some of the space is used for housekeeping so you only get to add your 7.4 TB to it.

False. you have exactly the advertised Terabytes. you’re expecting a Tebibyte, and they aren’t the same quantity https://en.m.wikipedia.org/wiki/tebibyte 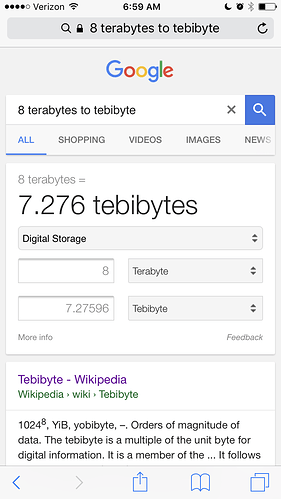 Completely moronic. I never knew that 2x4 was undersized, but the first time I bought it I measured and came to the realization. I should sue because the 98" was really 98.125" and didn’t fit in my car…

Pointless lawsuits are pointless. However, I guarantee that even though the lawsuit will be thrown out, they’ll change their in-store signs to reflect the actual sizes.

And how did Lowe’s dodge this bullet?

All of the placards at Lowes list the actual dimensions on the sign as do their website listings. They actually do a really nice job of that.

I actualy found a picture of a sign from my local Lowes for a 1x6 piece of cedar: 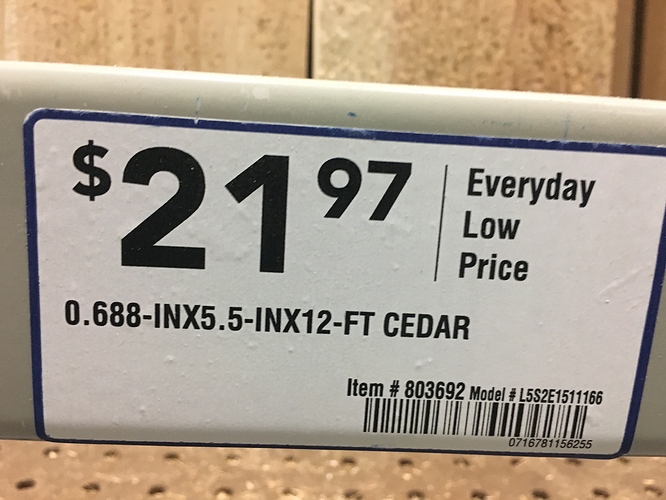 Now every piece of dimensional lumber will come with a warning sticker.

Makes one wonder if Lowes brought the lawsuit?

Menards and Home Depot stand accused of deception because they don't specify that their 4 x 4 lumber measures 3.5 inches by 3.5 inches.

It gets better and shows the state of our society:

“With some of Menards’ lumber products, both the nominal and actual size are shown, a document Turin filed in the case against Menards says. But the lumber in question is labeled only with a nominal size — “4 x 4 — 10’,” for example — that consists of numbers “arranged in a way to represent the dimensions of the products,” the document says. That leaves the “average consumer” to conclude that the pieces measure four inches by four inches, Turin said.”

Apparently they are following a government standard…

Early standards called for green rough lumber to be of full nominal dimension when dry. However, the dimensions have diminished over time. In 1910, a typical finished 1-inch (25 mm) board was 13⁄16 in (21 mm). In 1928, that was reduced by 4%, and yet again by 4% in 1956. In 1961, at a meeting in Scottsdale, Arizona, the Committee on Grade Simplification and Standardization agreed to what is now the current U.S. standard: in part, the dressed size of a 1-inch (nominal) board was fixed at 3⁄4 inch; while the dressed size of 2 inch (nominal) lumber was reduced from 1 5⁄8 inch to the current 1 1⁄2 inch.

But let me add and clarify a bit.

2x4 green and rough sawn but 1.5 x 3.5 after drying and planing,or dressing as some would call it.
I wouldnt want a chicago law firm coming after you for mis representing mother natures ability to dry lumber to final dimension or anything…

Bad Example there. The woman who brought the lawsuit was horribly burned. The coffee pot was checked and the temperature was at 160’ F. That is hot enough to cause 3rd degree burns, which she had, all over her crotch. It required THREE rounds of plastic surgery to repair her “lady bits” not to mention the TWO months she spent in a burn ward. She had to wear a catheter to pee for almost a year since her urethra had been burned. She became the butt of jokes and had an internet meme made of her ‘false’ claims.
McDonalds was found negligent on TWO counts.1) the coffee maker was set well beyond safe levels. Which was found against the Store.
2) McDonalds was found negligent because the lid of the coffee cup was badly designed and failed to seal properly. This claim was substantiated by HUNDREDS of complaints from customers who had coffee cup lids come off while they were driniking or carrying the cups.

Not that I have looked around for it, and i had not heard this before but this is a lot more information on the incident than what is commonly known. If true, and i am not say it is or is not, I would feel that this unfortunate lady is justified then in bringing and winning the lawsuit.
Sadly, the mainstream media, Social media and the internet are all too good at only putting forth fractions of the whole story creating a spin on the facts that taint the public’s opinion of an issue.

How much of the lumber size lawsuit is tainted in this manner? Who knows. The circumstances surrounding it and claims being made however, are much simpler and more difficult to skew to create a similar “taint”.

It requires that an IQ test be taken before you are allowed to sue any business or corporation. The minimum requirement will be an IQ of 100 or above before taken into consideration.

Should have had that rule in place for the last election.