How do I control the VFD spindle speed?

On the x-carve control board are two extra wiring ports: Spindle PWM and Spindle (1-10V).

I understand that these ports allow for controlling the spindle speed, but I’m not sure how to properly connect them to the Huanyang HY01D511B VFD and could use some direction on the proper wiring.

Plenty of information to be found using the search function

Okay, can you direct me to a search result because I’ve been crawling all over this forum and haven’t found the answer.

Here is what I’m trying to figure out. The positive (+) seems obvious to hookup, but I can’t figure out where to plug in the negative (-) wire. The manual is problematic with either poorly translated Chinese or referencing unfamiliar industry jargon/acronyms. I don’t want to make a mistake and fry the VFD. 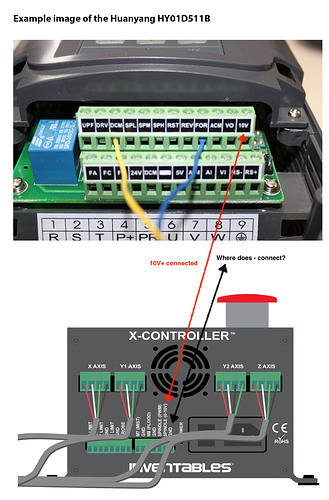 The connector may use the symbol for ground…look for this: 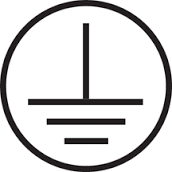 There is a ground available at #9, but - and maybe I’m over thinking this - I was expecting a 1:1 pos:neg for each feature on the VFD.

I am not sure about your device, but it is not uncommon to have a common ground.

What is your model number that you are trying to connect?

Link to the actual purchase: https://www.amazon.com/gp/aw/d/B01N1EJEQ1/ref=yo_ii_img?ie=UTF8&psc=1

Does this thread on CNCZone help?

Here is a table from the manual that is referenced in the thread that Erik posted. 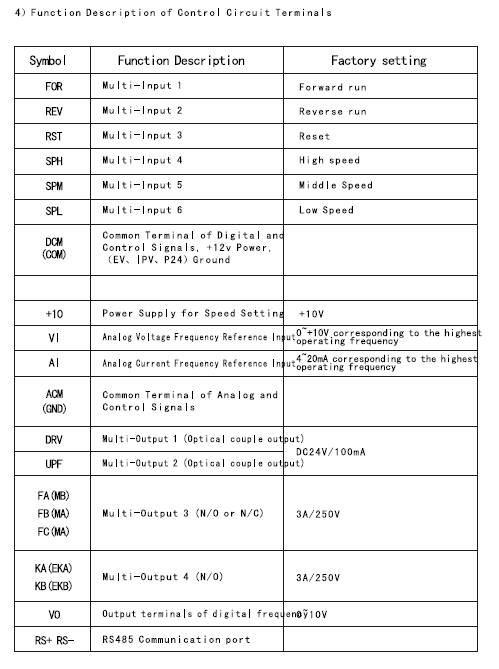 I’ve got the same table in my manual. I was thinking the negative needed to go to either ACM or DCM, and I tried them but nothing happened.

When I read through that thread you linked, if I understand correctly, it looks like the ground should be connected to ACM. Maybe I’m not correctly changing the appropriate parameters on the VFD to respond to the signals from the x-controller.

Just had a chance to try out the VI/ACM hookup and it didn’t work.

After connecting the wires, I went into Easel, set the machine for automatic spindle, and tried to turn the spindle on and off but it didn’t do anything. I pressed “RUN” on the VFD and tried again, but same results. Also gave the manual another reading through and I don’t see any parameter adjustments to activate/deactivate the spindle speed, or change the speed control from the pot to the VI/ACM inputs.

I’m pretty sure that the hookup is correct (VI/ACM)

change the speed control from the pot to the VI/ACM inputs.

Do you have a multimeter?

What’s your $30 and $31 values? What spindle are you telling Easel that you have?

What spindle are you telling Easel that you have?

Do you have a multimeter?

I do. Set it to DCV and 20V, touched to the X-Controller output for Spindle 0-10V and when I was setting up the spindle settings in Easel for automatic control, the output was reading 5.85V.

Ok, so you are getting an output signal from the X-controller that should activate the spindle and you have the control signal hooked to the correct inputs on the VFD (VI/ACM), the only thing left is the internal setup of the VFD.

I’ve taken you as far as I can. Someone else will have to pick it up from here.

I’ve taken you as far as I can. Someone else will have to pick it up from here.

Thanks though; it helps having another brain involved to try and figure it out.

I think once the right settings are found, it’ll be valuable to the x-carve community since these VFDs are becoming more popular.

Once you get it figured out it would help if you would post what you did to fix it so that others can benefit.

Maybe a list of the VFD settings that gets it working for you.

Actually @LarryM, there might be some advice you could give. You seem adept at reading those electrical diagrams, maybe you can take a second look at that VR input.

I see it says 10V/5V, and I read a reference in the CNCZone thread (@ErikJenkins linked earlier) that was advising the OP to make sure VR, VI, and ACM were hooked up.

Just got me wondering if the PWM from the x-controller could connect to the VR … maybe that 10V/5V reference in the diagram means it can be switched between 10V and 5V … and it’s supposed to be some kind of activation that has to triggered before the VI signal can be used?

Take a look at the snippet from the manual in the diagram above. The VR+10V/5V is an output from the VFD which is used in conjunction with the potentiometer to generate the 0 - 10 volt control signal.

You can verify this by taking your voltmeter and testing the voltage between VR and ACM without anything being wired to the VR terminal. You should read approximately 10 volts with the VFD turned on.

Since the X-controller already generates the 0 - 10 volt signal then you don’t need the VR output.