I’ve created a pretty basic set of paths in Illustrator that I want to cut as an outer outline and two fills at different depths.

The innermost shape has no issues: I can choose outline or fill, etc. That shape was created as one rectangle in Illustrator.

The two outer shapes don’t allow me to choose Outline or Fill options. In Illustrator these were created using two ellipses and one rectangle and joining the paths. They are each a closed path with no layers (not compound, not in a group). 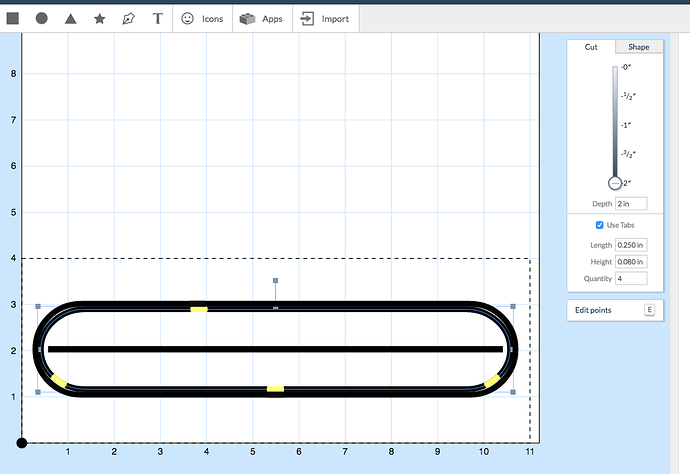 The most common cause to this is that even though you joined the objects, the paths are not closed paths. The whats or whys, I’m not sure but Easel only does this if the path is not closed.

If you would like to make your project public and share it, I’ll happily take a look at the file.

As a side note, for simple objects like this I find it much easier to draw the objects directly in Easel and skip the whole export import process.

I can also see that your path offset is not uniform. Not sure if that is intentional or not.

Thanks a lot for taking a look: http://easel.inventables.com/projects/HGUNh5Z4ufjv61D4HSzZOA

I really want to figure out what’s wrong with this, because I’ve been using Illustrator for years and find it much easier / less clunky than Easel

I know what you mean, it’s not really an issue. In the end, this is just a case for an edge-lit piece of lexan. That’s what the center slot (innermost path) is supposed to fit.

On a shape like that, you can often correct path issues using the scissors to to cut the anchors on a straight section and delete the segment. Come back with the pen tool and draw a line form anchor to anchor. It’s solution that usually works for me.

Just tried what you were describing and applied it to the outer path as a test. I used the Pen tool and actually added a point to one of the straight sections, then deleted it in order to make it open. I then used the Pen again to close the path and now the outer path is recognized properly by Easel! Thanks a lot for your help!

Get in there and give Easel its day in court. I redrew your project in about 30 seconds. I used the off-setter app and got a perfect .118 inside offset. It’s really easy once you understand its approach.

Just a note to anyone who may have this problem in the future:

Although the path may look like one continuous path in illustrator, once you delete a point from the path you may find that there are more anchor points than you could see and that the path is not actually closed – it has overlapping sections instead!