when i use affinity Designer to make my SVG files every thing is perfect until I import the file into Easel. they come in microscopic and require that i resize the image. this is not at all optimal as the sizes are perfect in Affinity before the export. Can any one help me with what is happening here? thank you for your time.

Sounds like you are having the same problem I was having. It’s probably an issue with Affinity Designer not including a header in the svg export. You’ll have to scale your export, the exact number may take some figuring. Here’s the discussion we had earlier:

I've been having issues with all of my svg files scaling down on import. No idea why, my file in iDraw is the proper size, when I export the file the scale is set to 100%. Here is the link to my Easel project, the outer most circle should be 63mm and the internal square should be 41mm x 41mm. This is really baffling me, not too sure what else to do.

I’m sorry for the trouble. Would you mind attaching an SVG saved by Affinity Designer? If it does include any identifiable headers, then we can adjust for whatever scale it uses. Thanks!

Thank you for the fast response. here is a copy of the file that I am trying to bring into easel. any help would be appreciated.

There is some strange grouping in that file.

Glad to see someone using Affinity Designer. I’ve thought about using it instead of Illustrator. How do you like it other than this hiccup?

Sketch42, other than the issue of sizing on the files, I love the program. I was trained on all the adobe stuff and with their change to a monthly subsricption i just can’t continue to support them. this is one of the best options i have found.

I had the same thoughts. I may be leaving my CC subscription behind at some point and between the Affinity products and Pixelmator I feel like the transition away from Adobe won’t be so bad… but… but, smart objects.

Affinity Designer uses 300ppi for the Pixel # in .svg files.

Nice app, modeled on Freehand. Wish they’d do a Windows version, or that Apple would make a tablet w/ an active stylus and daylight viewable display.

Sorry for resurrecting this thread, but @WillAdams – any idea what the ppi is that should be used when exporting for Easel? I’m guessing that I can set up Affinity with a different export profile, that could match whatever easel expects and ease some of the scaling issues.

I just always include a rectangle of a known dimension around everything, then check the size of that on import. Been burned too often by scaling factors to not have a check like that.

That usually works for me.

since this has already been resurrected, I have been having a similar issue importing from an SVG created in illustrator. It shrinks the SVG a tiny bit even if I chose to export full scale. Its annoying because it shrinks just enough to not be easily noticeable until you go to assemble and nothing fits.

By the way, I was having this problem as well with Affinity Designer and Easel and after trying many permutations, this seemed to work: 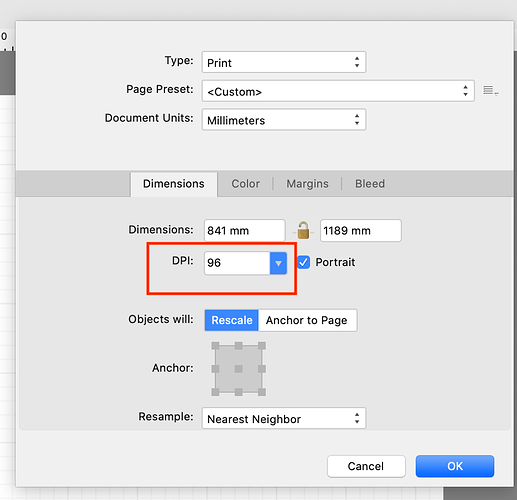 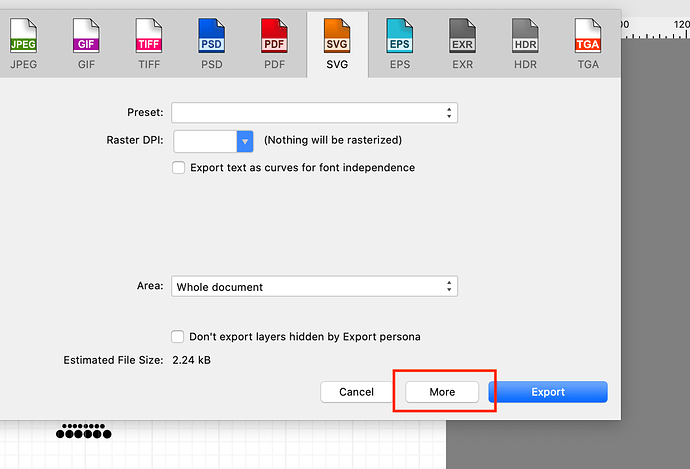 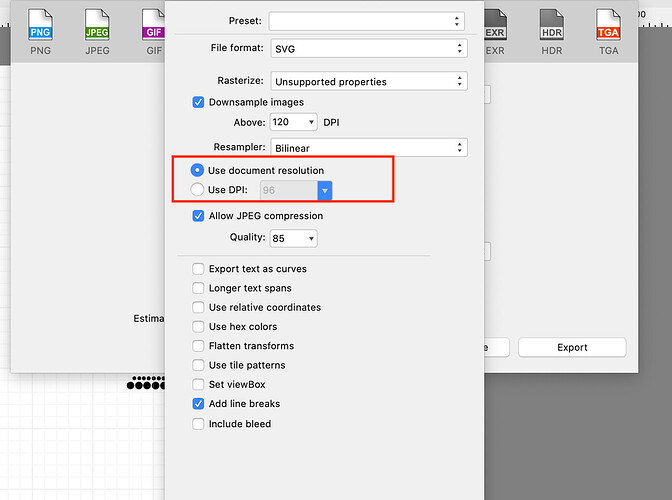 Also, I believe the “Set ViewBox” on the “More…” screen needs to be unchecked.

The best way i know to calibrate this is to add a bounding box (rectangle) that encompasses your entire drawing of a known size. After importing in easel, select all and scale it to the size of that box. That will properly scale all the elements to the size you designed.

You can also use this method to determine the scale factor that easel is using and modify your export settings to the corresponding dpi in affinity.