Planned to do while building/from the start (and more that I’m probably not thinking about):

Here’s some starter pictures that I took:

The intended work area in the basement, which is on anti-microbial foam floor tiles and a 4’x4’ shelving unit (the 2 pieces are connected…still need to level it). I ran 2 20-amp circuits over there to handle all power needs and more.

X Carriage and Y plates put together with motors mounted 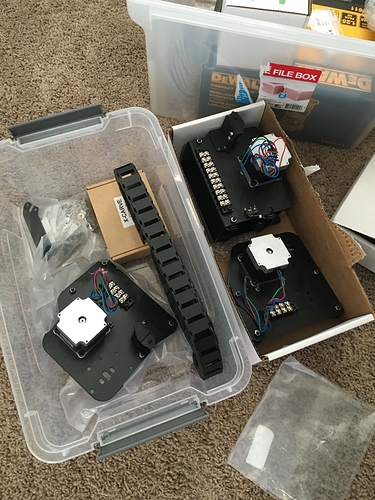 I’ve got a box of various parts and such for assembly waiting to dive into. Hoping to assemble it within the next few weeks. The primary purpose is to expand my wife and I’s Amazon/Etsy shop into wooden products plus, I’ve always wanted a CNC so it’s a perfect fit. But of course, the shop orders take priority so this usually goes on the back burner, which is why this is all I’ve got done in the last month.

I’ll try to take more pictures and update this as I go.

Is it the best table/stand? Probably not. I put them next to each other and connected them together and they are pretty stable.

Actual cutting will dictate if I beef it up more or change to a completely different table.

I went with a similar approach. I got two of these tables when they were on sale at Home Depot and set them up next to eachother. The feet are mounted on threaded rods so I actually managed to get them surprisingly level and coplanar so I’ll be deciding whether or not a torsion box on top will be necessary or not. 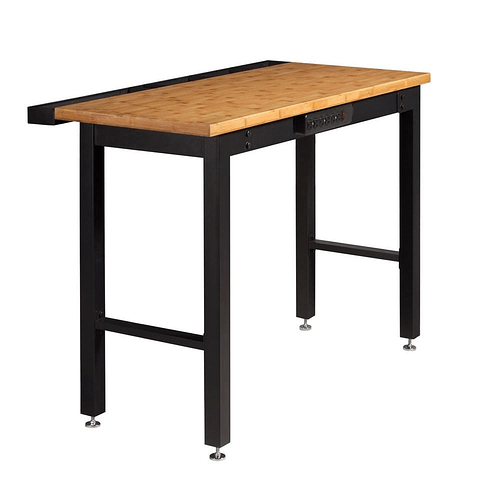 Your planned build description and mods sound great though, I look forward to seeing the progress!

Had a little time to get some progress made and also decided to order the Jtech laser mount as part of the build. I’m not getting a laser yet, but figured I would eventually so I’d assemble the mounting kit as part of my initial build. It’s all a tax write off anyways. 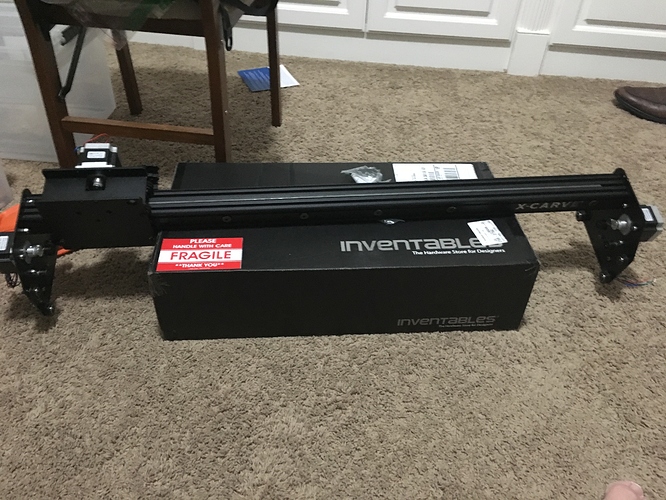 Started putting the work surface together this AM. 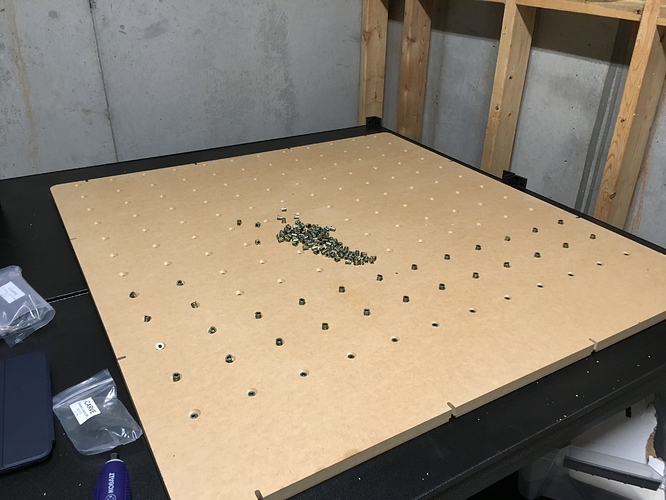 Got the frame built and spoil board attached 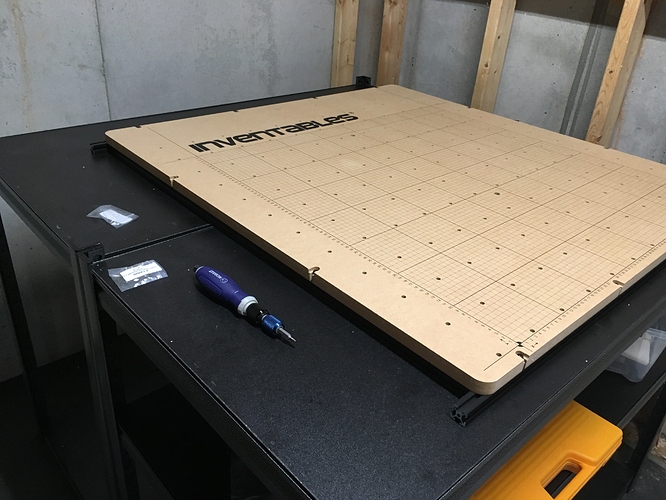 No more assembly work this weekend. Plan is to resume building during the week and maybe actually get it working next weekend. Usually I would just power through and assemble it but I’m liking the more methodical slower process for this. There’s a lot of little nuances when building this thing. 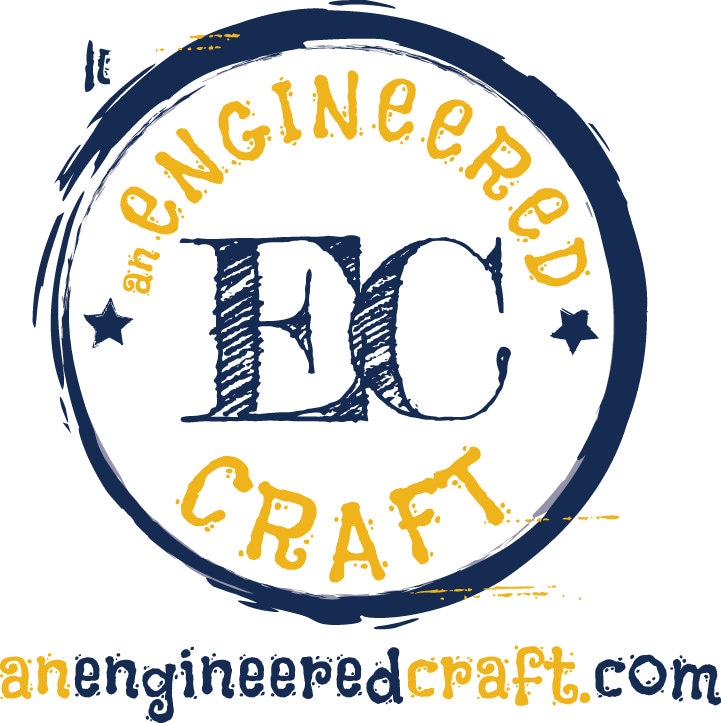 An Engineered Craft by AnEngineeredCraft

You searched for: AnEngineeredCraft! Discover the unique items that AnEngineeredCraft creates. At Etsy, we pride ourselves on our global community of sellers. Each Etsy seller helps contribute to a global marketplace of creative goods. By supporting...

Our Etsy is much much slower than our Amazon (same name on Amazon). We’ve actually discussed closing down Etsy it’s that much different.

Hopefully going to have CNC items up within the next 2-3 weeks.

So my wife decided that we’d be more productive putting the CNC together instead of doing our vinyl orders so more progress was made!

I didn’t take many “during” photos but we were able to build the Y axis, belt everything (need to check tensions at some point), get the basis of the Z axis mounted and skipped ahead and mounted the Y axis and gantry assembly to the waste board/frame.

I’ve got heat shrink on the belts and some electrical tape as well…hopefully it’ll help hold it in place. 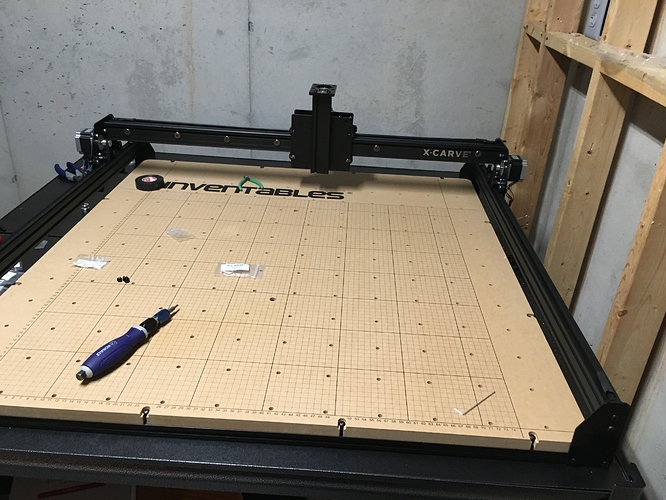 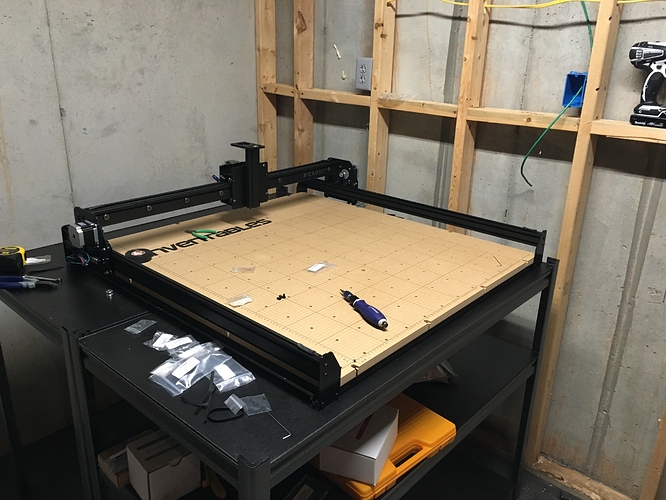 I agree with the Mrs…

No assembly work this week but got the Raspberry Pi loaded and ready. Also purchased quite a few things that are “needed” (fish scale for tension, pulleys for vac support, cable cutters for steel cable, etc.)

Here’s an iPad screenshot connected to the Raspberry Pi thru VNC with UGS loaded. 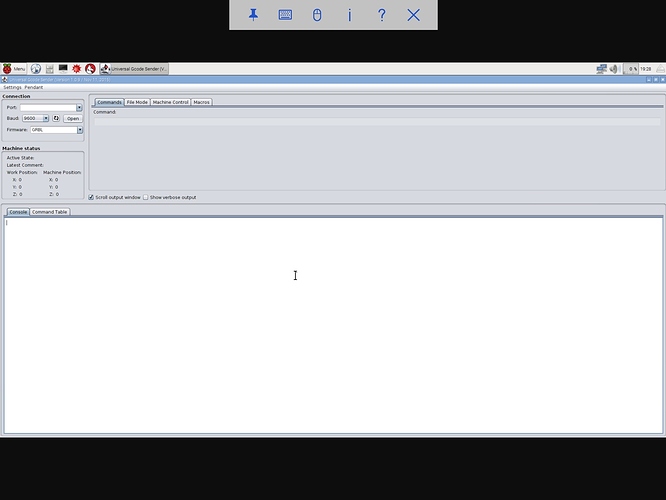 Hopefully work can continue this weekend but we got a full slate of orders for Amazon to get through so maybe not. Maybe the Xcontroller will actually ship before I get my Xcarve assembled.

Edited because I answered my own question.

What, if any, downsides are there to having the router sticking that far out of the mount? I have access to the spindle stop button thing to allow for easy bit/collet changes. 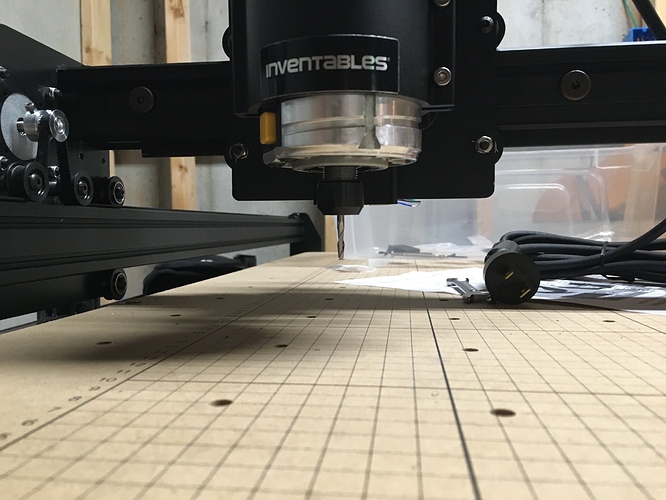 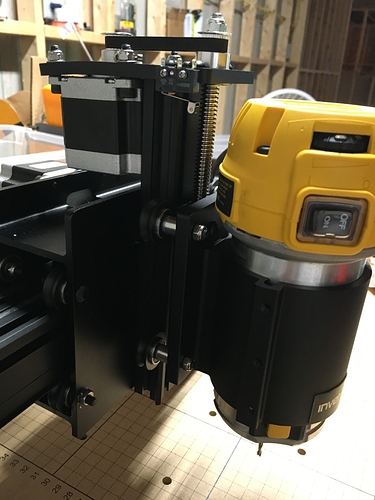 Just make sure that when the bit reaches the waste board that the bottom v wheels are still fully on the router mount. Other than that I don’t think its a problem, but I’m just a hack lol

Down to the spoil board and wheels are still on. Worst case I change it if it doesn’t work.

I believe that I’m basically done with assembly now. It took a good effort last night and today but all that’s left is wiring the Y1 motor, all three homing switches and connecting up to the Gshield until the Xcontroller ships.

Ran into an issue with a screw on the spindle mount…I was being dumb and stripped the hex head. So had to go get an extractor and fiddle with that. It luckily came out without damaging the hole. 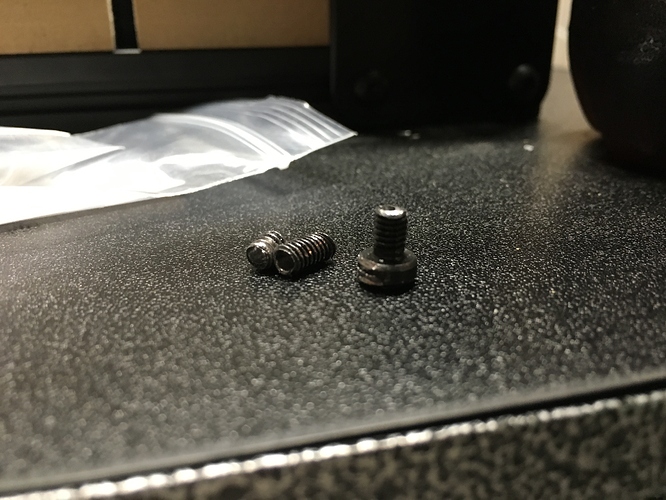 I noticed that the Z top plate had a slight bow to it when I installed the stepper…cause for concern? 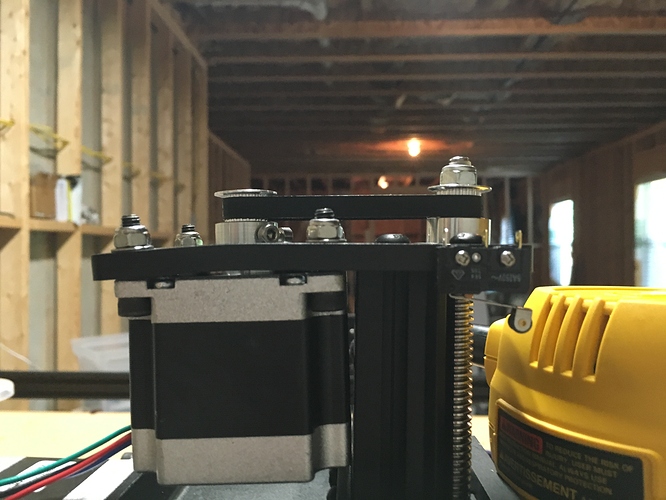 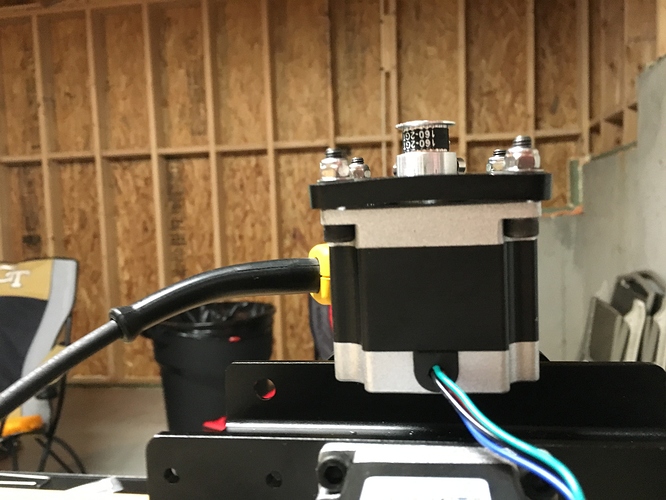 And now just some pictures of the overall progress and wiring and such…I have quite a bit of excess wire to trim up but that’s what I wanted so it’s all good. 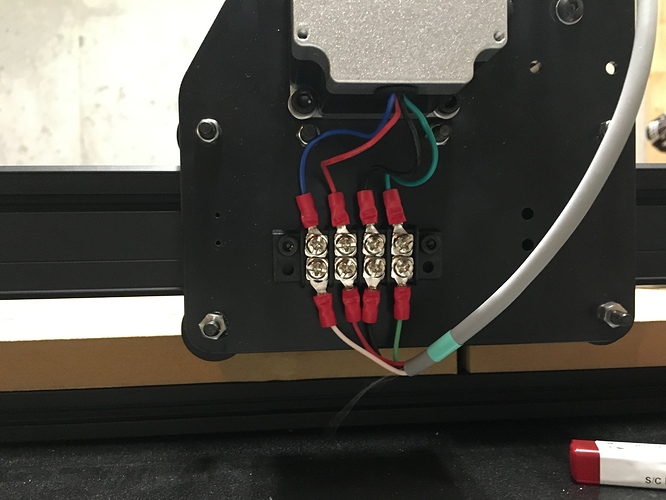 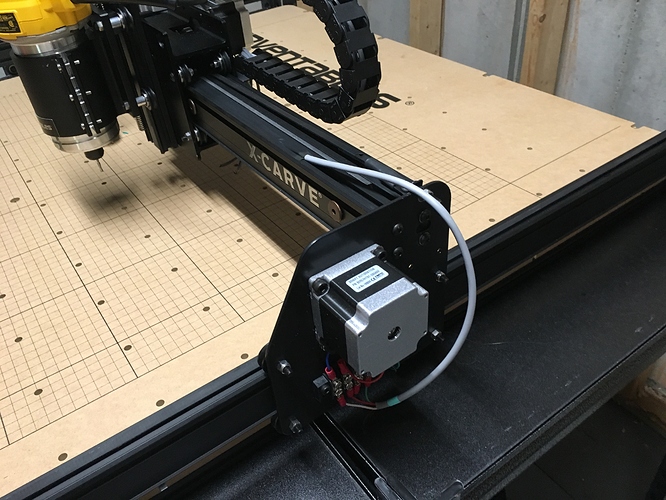 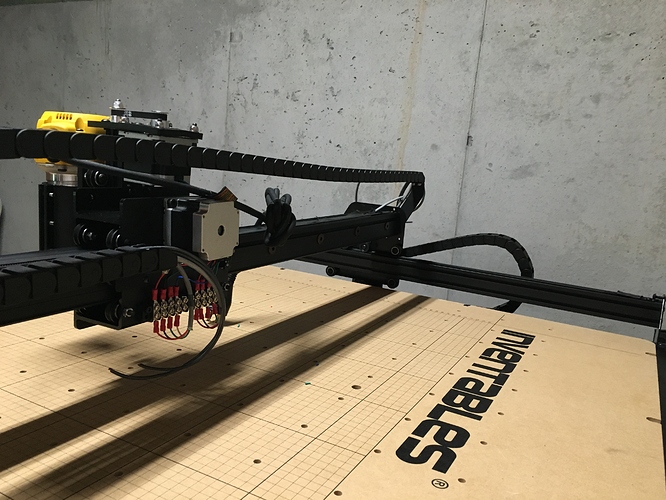 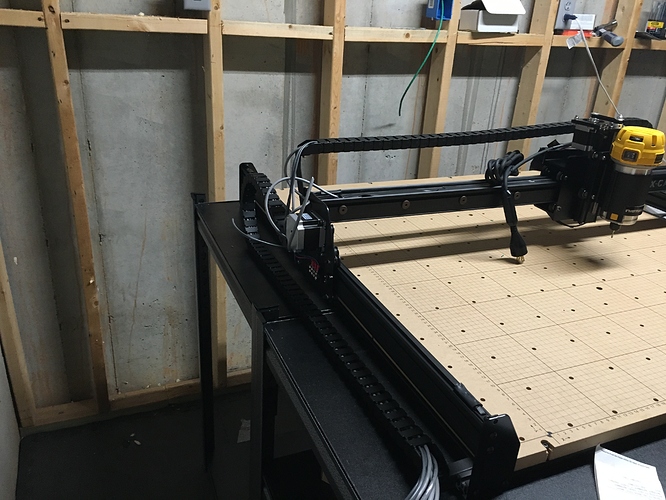 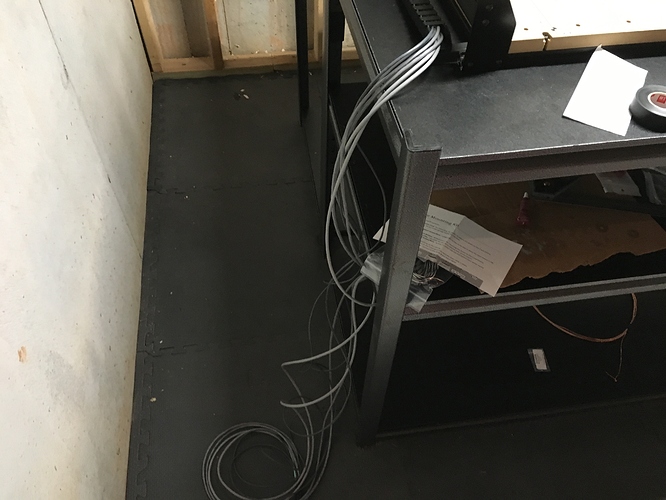 I also received a bowed top plate, I contacted Inventable and they sent out a new one, I got it in two days

The stepper wire on the right goes through the hole in the stepper plate? here is a pic of mine

Just noticed you have a stiffening mod, maybe that’s why? 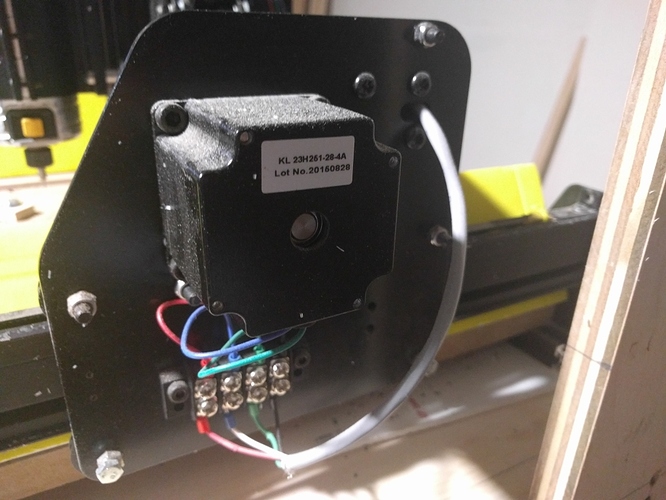 Yea the bolts take up all the available space. I’ve got the new single piece X axis coming in once it is released so I’ll feed it through then. I tried to get the wire to go but it just wasn’t possible.

It’s down in a channel of the makerslide with electrical tape over it holding it in place (not very well). It’s out of the way of the X carriage though.

I don’t know if that is actually going to matter. I was able to traverse the entire Z axis and a bearing is a bearing. The screws will either keep the bearing from falling out or from pushing up, either way it’s holding it in place.

Maybe the bow is actually an intended slope to allow for easier installation of the belt to the motor pulley and tightening the plate would straighten it out? The pictures don’t indicate that but maybe?

Talked to Inventables and a replacement plate is coming with my upgrade kit. Jeffrey at Inventables is awesome if any of his managers are reading this.

Now, the best news, THE BEAST IS ALIVE! Spent tonight adding the Suckit dust boot, finishing the wiring to the Gshield and did a machine setup through Easel and the machine actually worked…not without a few hiccups but it works! No carve yet but all steppers work! I broke a screw so I have to remedy that tomorrow before carving.

So now, the questions based on what I saw:

After I extract the broken screw and do some pot adjustment, I’ll do some test carves and calibrate it. After it all works with a laptop, I’ll switch to the Raspberry Pi.

It was really cool seeing it move for the first time. I’ve got some video but you all have seen these things move before.