It would be great to have a pop up with jog controls for the X-Carve. I’m tired of having to go into machine setup to jog before or after I’m ready to carve a project. Adding external control, like with an Xbox controller would be even better. Or, at least enable jogging when the carve is complete… right after the pop up asking if the carve was successful.

Can you not jog the machine from the carve button? When you have moved it just hit the “X” in the upper right of the carve pop up.

I do like the idea of having a control pop up, but hitting the carve button and then out, might be a better solution than going into machine setup.

Yes. The carve button will get you there… but in my opinion, both methods feel more like a work-around and take away from the workflow. After trying out the function in Estlcam, I found myself “needing” this feature in Easel. Being able to jog your machine at any point independent to workflow routines within the same software is forehead smackingly useful (the why didn’t I think of that before now scenario).

Thanks for this suggestion. We’ve got some improvements to the UI in the works and this is definitely something we could do.

I second this. I haven’t even carved anything yet (XCarve has been moving on its own for about 10 minutes) and I already wish it had this feature. I actually came to the forum to find out where the jog control WAS, not to find that there wasn’t any, lol.

Since Chris (someone from Inventables) is reading, I have a feature request list:

Home button - those with limit switches, it runs till it hits each one.
Short jog - press a button, it moves a bit (like the current jog in machine setup)
Short jog distance adjust - how far does it move with each click?
Run jog - press and hold the mouse button and it keep moving while the button is held
Run Jog speed - adjust how fast it moves while the mouse button is held

The distance and speed adjusts would be independent for each axis (or, x and y could have the same settings…)

I just got UGCS up and running on my xcarve - their setup would be pretty slick too. In particular, I like their keypad controls (4/6 is X, 2/8 is Y, 3/9 is Z). When I’m getting set up, having to hit the shift key is an annoyance as I have my head by the machine and am hitting the keyboard with the other hand… it makes it hard to fine-tune the zero point on the z axis when I can’t watch it live because I need both hands on the keyboard. (side note, there’s the definition of a first world problem).

Another idea - maybe use 1/7 on the keypad to change the scale of motion. Every time you hit 7 it doubles the step size or something?

Here’s a little gcode file I made that’ll do exactly that.

This will make a keyhole going away from you along the Y axis that is 10mm deep and 10mm long. It’s meant for a 3/8" keyhole bit.

To use it, park your bit on the material where you want the wider part of the keyhole. Then run the file.
It will raise the bit, turn the machine on, plunge down 10mm into the material, move back, then forth, then raise out of the material and shut off at a safe height.

I do a fair amount of Arduino projects already and the joystick adafruit module keeps looking at me trying to find a way to be utilized. Even Amazon has advertised the joystick gamepad module which if we could inlay that into the pin sequence of the gshield would be pretty amazing. Accomplish what @PhilJohnson suggested by manual precision running of the machine or even better a non-keyboard jog control.

Example of the joystick pad http://www.amazon.com/Phantom-Arduino-Compatible-Joystick-Extended/dp/B00J8BWS3O/ 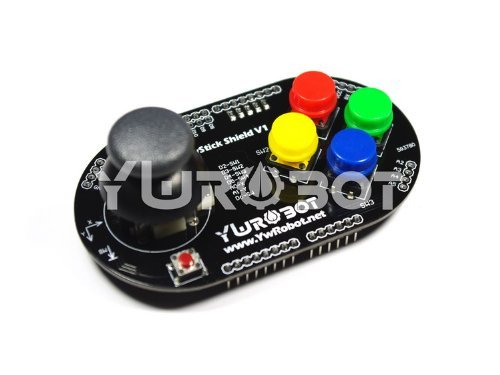 OMG this is exactly what Im looking for!!! There has to be some way to set up some “universal” key pad or something to program each button to do whatever function we choose.

I made this one that uses an Arduino Due and inputs commands to Universal G-Code Sender: 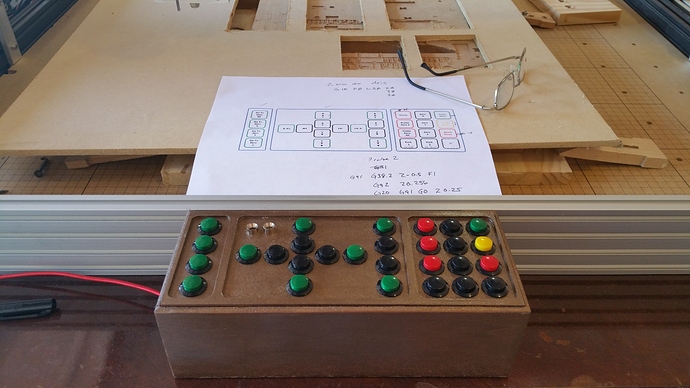 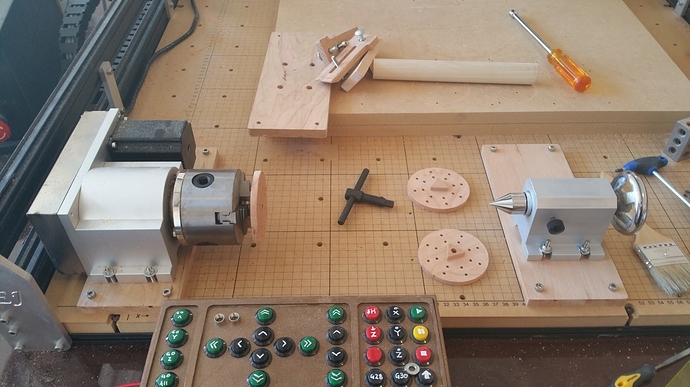 And this one also using an Arduino Due that has bidirectional communication with Mach3: 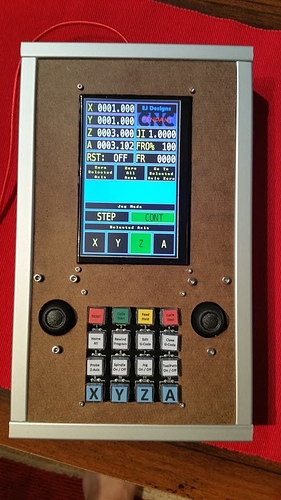 I have no idea what “bidirectional communication with Mach3” is but would LOVE to have something like the first one you posted!! do you have any kind of directions of even just the Ardunio code for it?
I could make a box with a bunch of control buttons but getting it to talk to the XC is where my knowledge falls short.
Also, PhilJohnson, I like the idea of using a game pad of some kind to accomplish the same goal but then I run into the same problem of getting it to control the XC. I don’t think the keyboard always controls it. like if I’m in a different window or something. IDEALLY I wold like something that can control the motors even with the XC’s Ardunio off but I know that is not really probable because of the motor control board.

The pendant sends keypress data, joystick movements and touchscreen inputs to the computer…

I used an Arduino Due for the brains of both pendants as it makes USB communication very simple.

I have the Arduino sketch for the first pendant that I can send to get you started, but it is set to only work with Universal G-Code Sender as that is what I was using at the time I made it.

yeah, sure Ill have a look at it!!
Sounds pretty in depth but also like exactly what Im wanting. I have to get a computer that wont crash every other-day first ugh!
I just googled the Mach3 and it looks like that’s $175. I was going to try to start using Fusion 360 as its free fro personal use. Do you think it would be able to do the same?

Mach3 will not run off of the original X-Carve hardware or the X-Controller. I replaced my electronics and went away from GRBL. So to use Mach3 it is a major undertaking.

Fusion360 is to create files to run in the same line as Aspire, V-Carve ArtCam…etc…

Mach3 is the g-code sender I am using…in the same line as Universal G-Code Sender, Picsender,…etc…

I will send you the Arduino code for the pendant later when I get out in the shop.

oh man, yeah you really dove off the deep end hu?! lol
i don’t think Im going to be going that far. but I hopefully will be able to use your A code to get some external controls. thanks again.

Man! It’s already been 26 days since I last talked here?! Where does time go?
Anyway, what did you mean it sucks power?
If it’s plugged in then that should matter right?!

Gotcha! I had to get a new computer on black Friday! I couldn’t take it anymore with trying to do anything in a cad program of anykind.

I will send you the Arduino code for the pendant later when I get out in the shop.

@ErikJenkins Can I get a copy of that Arduino code? Right up my ally with microelectronics and arcade buttons. Is the code commented? If not, I can figure it out. About the 4 buttons on the left and the 3 black buttons on the right side labeled X, Y, Z; what are those for?

I’ll dig out the code and send it this weekend. And I tend to over comment my code…

The four Green buttons on the left are:

The black ones on the right are: