Land of the Lost

A friend has a “Land of The lost” themed party coming up so I have been working on some props for decoration.

A “Crystal Matrix” control panel, Sleestack Skulls and a Pylon 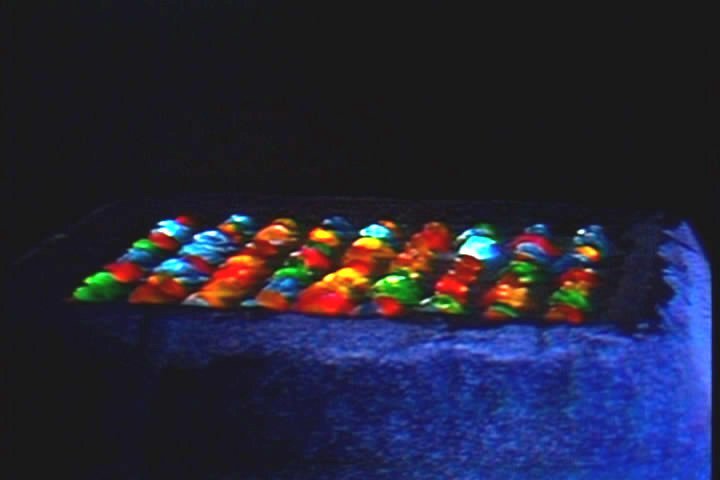 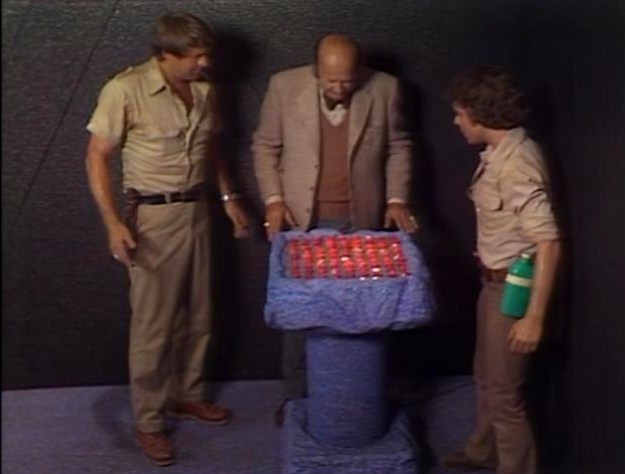 The main frame, the top is held in place with a rabbit joint, the sides with pocket holes using my Kreg jig. 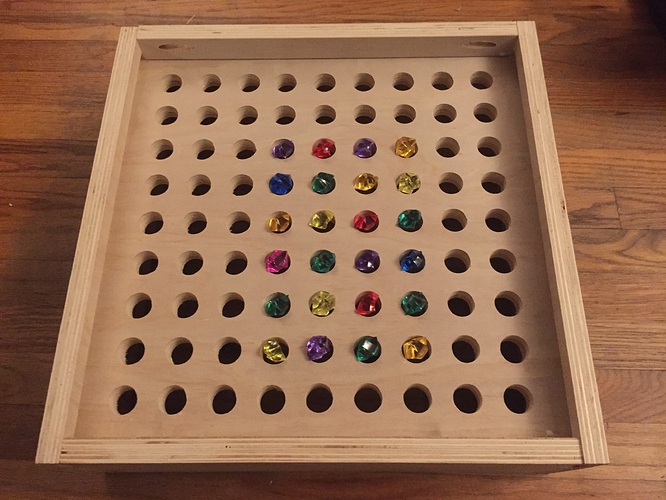 Testing some aquarium stones as the crystals. Cheep but a bit too small. 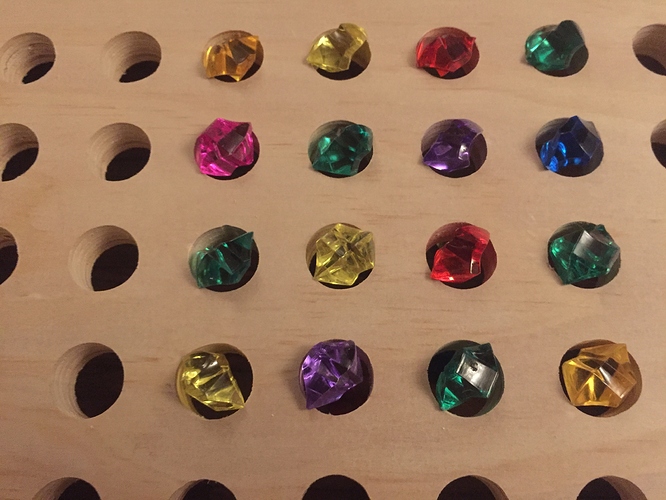 More Crystal tests. Some 3D printed gems and Vase fillers. I think the sea glass vase filler is the closest in size and shape. 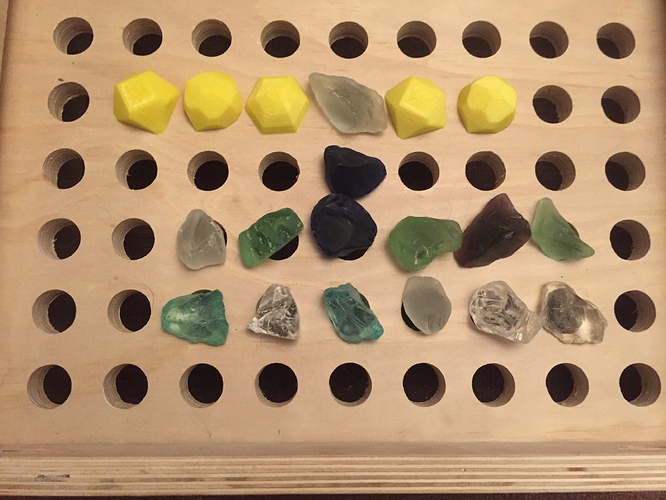 Testing glass paint. It actual works really well. It goes on pretty blotchy but evens out as it dries. 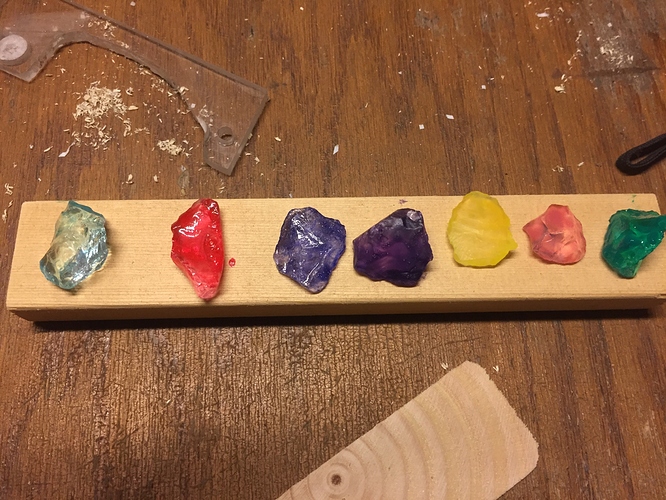 The pedestal using more plywood, a concrete tube form and 2x4 supports. I made sure to get kiln dried 2x4s so hopefully they won’t warp too much. 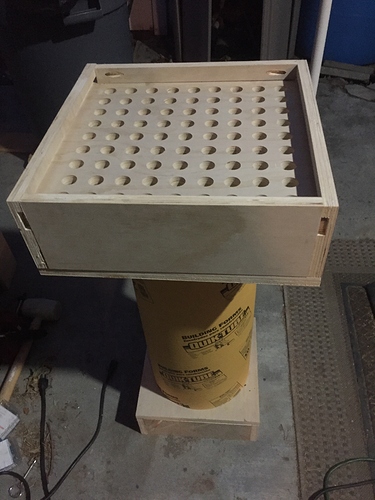 I made a bracket to align the 2x4s and the tube. Despite the tube being labeled 10" and listing its size as 10", it was not 10", more like 10.25", so I had to redo the bracket. Oh well I should have confirmed the inner diameter first. 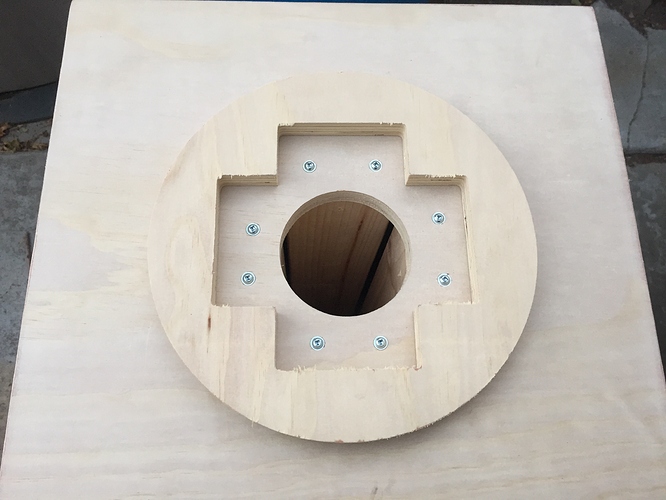 After I made the pedestal I realized that the way I did it, with the box sitting on top, that the foam would existed past the box edge to cover the pedestal top. Not a problem, but if I wanted to put the box on a table without the pedestal the weight would be resting on just the foam. So I made up some trim to go around the edge under the foam to take the weight. This was not a problem as the sides were going to slope anyway. Originally I was going to have 2 layers of foam so it didn’t change the look at all.

Here is the foam after it has been cut with a hot knife and the seams covered and sealed with some wood glue mixed with sawdust. 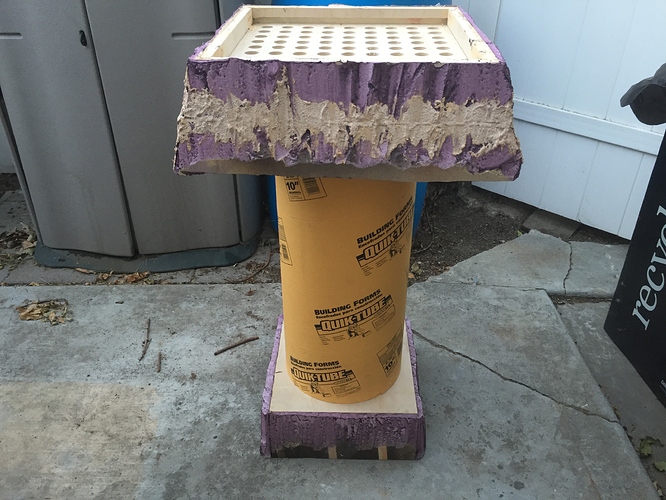 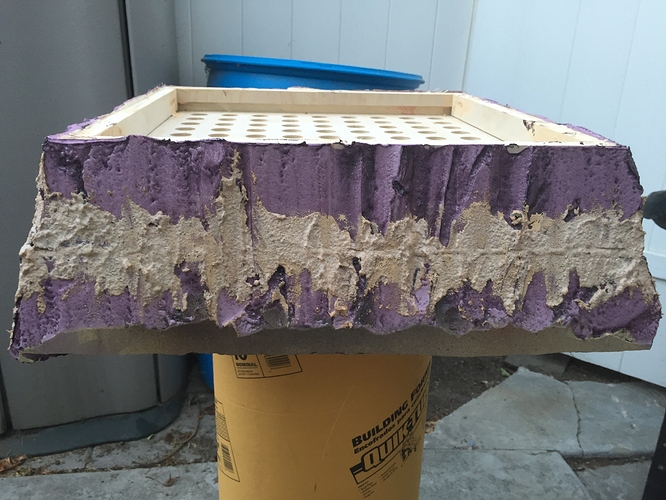 The plan is to cover the whole thing with the mixture to give it a “Stone” texture. This will also seal the foam so I can use spray paint on it.
I initially used sawdust (the finer dust, shaken through a screen) because that is what I had. It works well as a putty, but it is still a little courser that I would like for this project.
I need to seal the foam and cardboard no mater what. But I am thinking maybe of using something else for the texture.
I could use stone spray paint, It mostly depends on how much a can will cover.
I was thinking of maybe fiberglass resin and sand?
I was considering coating it with resin anyway. I want to weather proof this as much as possible because the post event storage plan is to leave it out in the back yard somewhere.

I had originally planed on gluing the stones down. Now I am considering adding some recesses for the stones to sit loose in. Gluing is easier so it is probably what I am going with. If I ever made a interactive version, movable stones would be nice.
Mad scientist labs makes a neat interactive LED array kit that would be really nice to use. But it is too expensive for my budget right now

The Sleestack skulls are supposed to look like this: 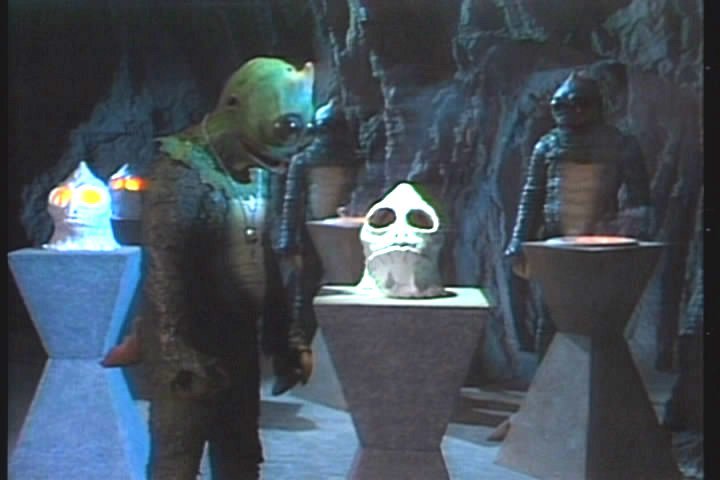 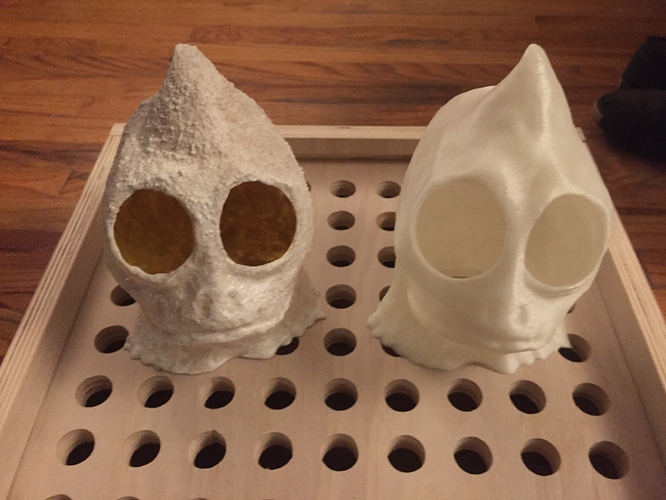 The first skull I printed single wall thickness and it had lots of droops and voids on the overhangs. I fixed it with some paper and glue and tested out my sawdust glue mix on it. 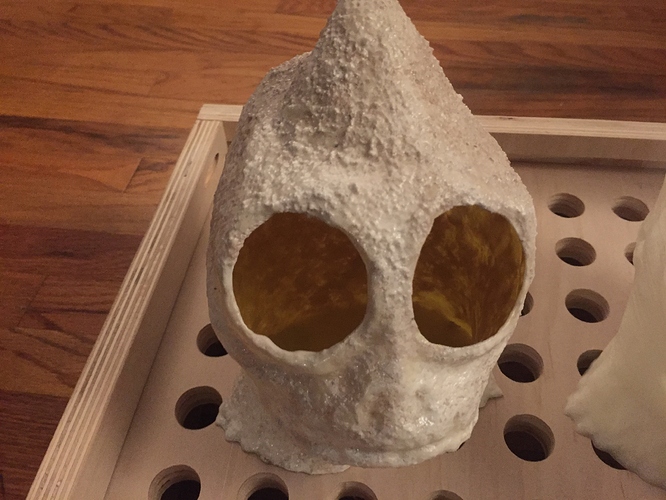 The second skull was printed with thicker walls (and it took 5 times longer) Unfortunately there was some cracking, part of it was the material (ABS) and part was my settings (layer height just a bit too high) I ordered up some PetG to try out for the full size skull. 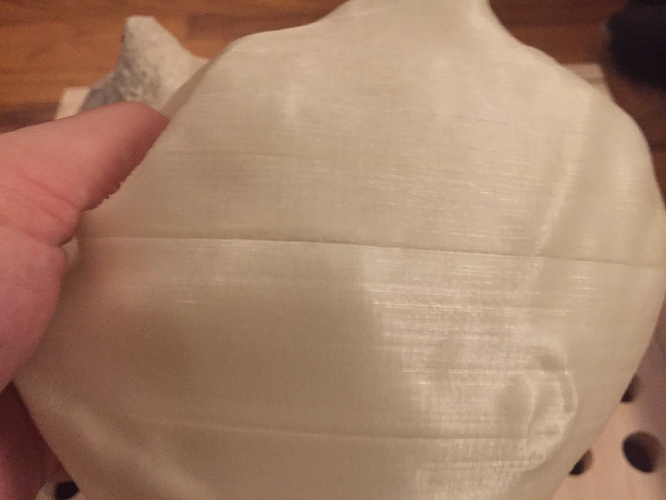 I love it! Very nice.

If u want the gems to be a uniform shape/size, I’m sure you could find some stones for costume jewellery that would do the job

I actual made up a few gem shapes to be 3D printed so I could control the size and shape. But after watching the old show the “Crystals” were just lumps of sea glass of various sizes. (very cheep prop budget) The often don’t show them, and I am not sure if they are the actual “Color” that they say they are using.

Some of the close ups of the crystal matrix show all clear crystals, or in one case all red. (yet they are always talking about the correct color pattern to press)

After playing with them I decided on the sea glass. I like the raw stone, “Cave man Tech” look of it. The only drawback is the difficulty getting usable shapes and sizes in the small assortments at the local craft store. If I was to make up more of these I think I would make molds of several of the better stones and cast them in colored resin. More work than I want for a one off party deco.

I miss being able to get up while the test pattern is still on and binge-watching cartoons straight from 6AM to noon, using the TV Guide to strategically switch channels between ABC, CBS and NBC, so I could catch Mighty Orbots, Thundarr the Barbarian, Laugh Olympics, Thundercats, Superfriends, etc. while eating an entire box of Lucky Charms. Good times…

The final texture coat with some stone spray paint in the base.
The sawdust and wood glue mixture is working well. Better than other plaster based products I have tired on other foam projects in the past.
The sawdust particles “plump” up in the glue. So next time if I want a thinner texture I may try sand. Though I don’t know if sand will “thicken” the glue like the sawdust does. 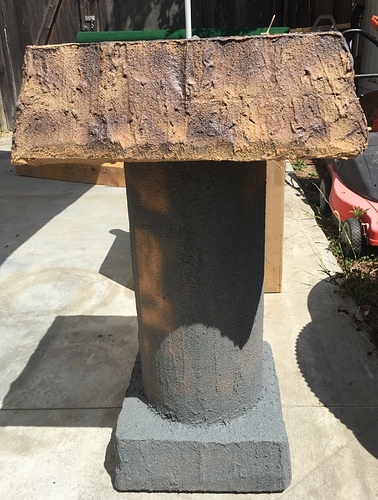 A close up of the stone spray paint test. 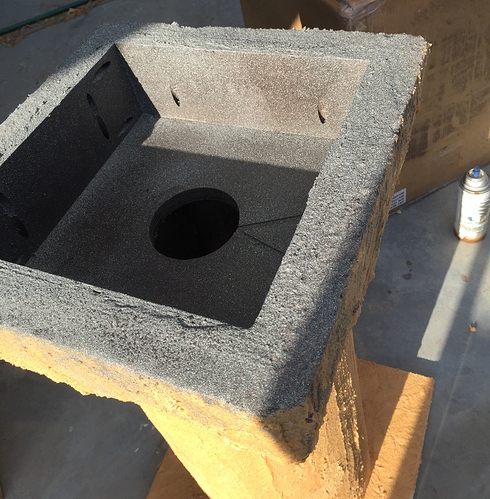 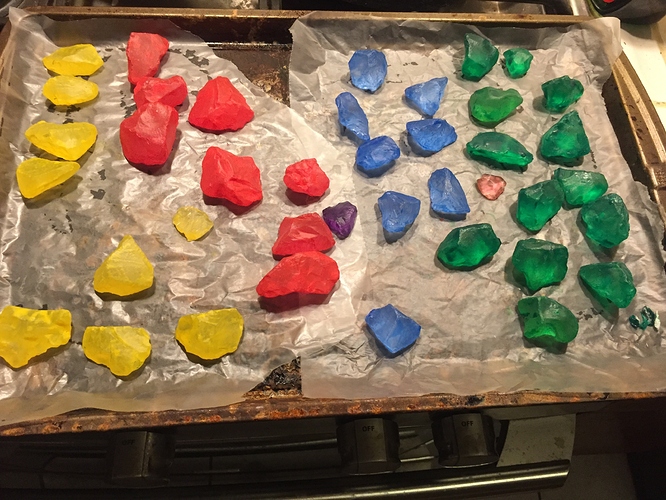 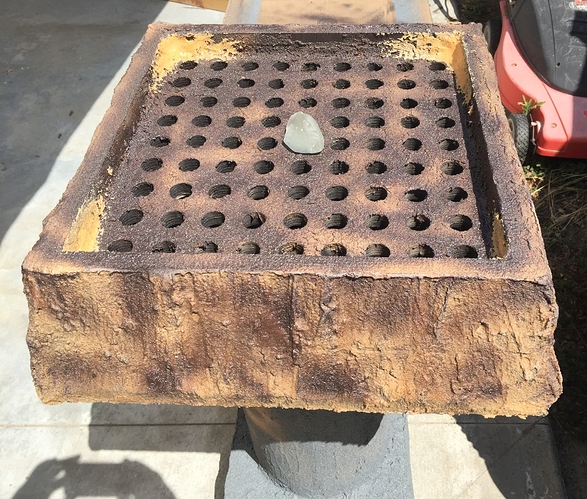 Man that brings back many memories of that show. Those creatures used to scare the hell out of me when I was a very young kid.

Just found this image. It really shows the look of the crystals. 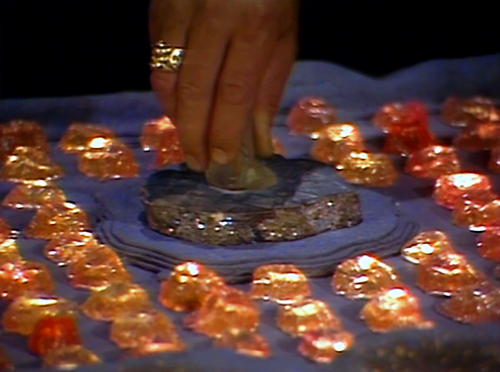 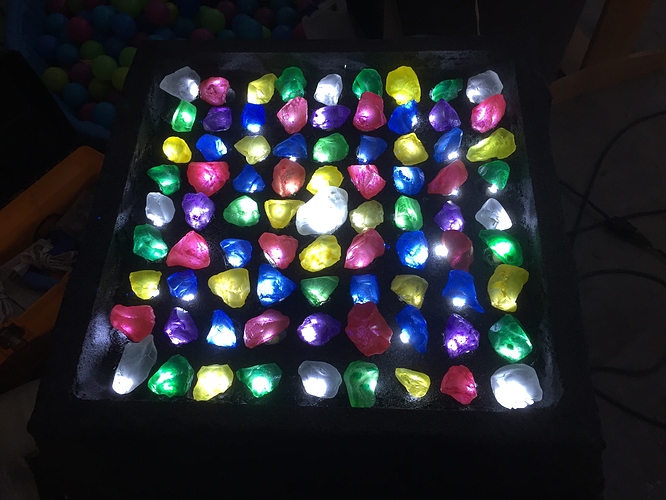 Careful, if you remember the show, those crystals control time itself… you could find yourself starting this project all over again in an infinite loop.

Originally I made the holes big enough so ambient light could shine up through. I was thinking I would just put a single bulb inside, or maybe just a pile of string lights.

This didn’t work well, the light wasn’t coming up evenly. So I used some old LED Christmas lights and stuck one up in each hole. This worked really well.
Unfortunately getting the lights to stay in place was a pain. I tried hot glue, but it would not hold strong enough and would pull free when I moved the string of lights around.
I wound up using staples. Always a pain with string lights if you are not careful you hit the wire. Fortunately I didn’t break anything.

If I make another one I will modify it. Make the holes 1/4" so I can just shove in a LED and easily glue or tape it in place. With a shallow pocket around them so that the light can diffuse a bit into the stone.

In hindsight I should have cut a thin panel with holes for the LEDs attached them and mounted that up inside the box. (I just thought of it)
Actual that may be a better approach anyway, easier to work on and replace if there is a problems with the lights.

The final paint job
(The a June bug is a volunteer) 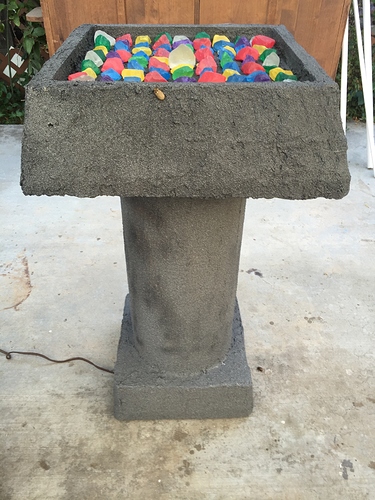 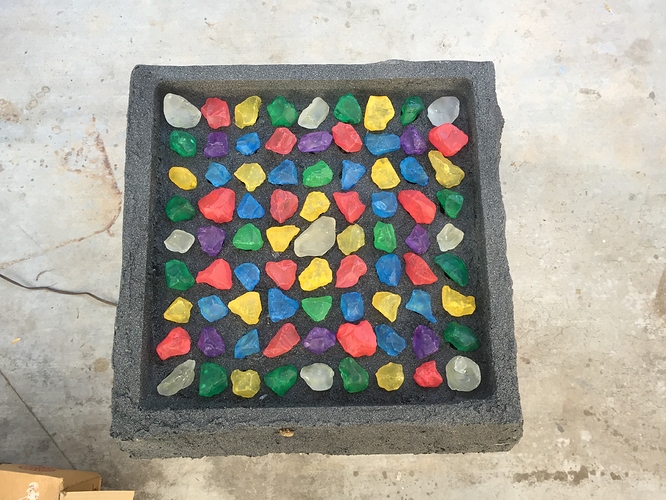 you could use those led strips(the ones with wires between them so they are easier to position and tack down) Then you can get it to do patterns.
Would be awesome to have a set up like that so it recognizes gestures and then the lights flash in the pattern you want.

Here is a picture of the Lights I was talking about. 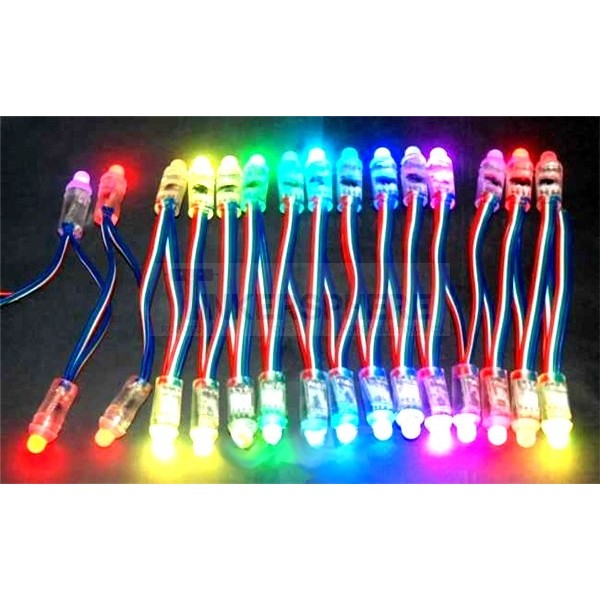 When you 3d printed the skull you can use PLA as it does much better with something that size.
However it looks like you can clean that up and with a bit of acetone glue it back together. Then use some filler and sanding then paint it. No one would ever know the difference.

Way cool project! I was thinking of building similar just for people to mess around with in my basement. If you want to make it interactive, use an Arduino, an array of neopixels, and maybe some simple switches under each stone. This gives you Independent control over each stone’s color and brightness, in response to presses & whatever else you can dream up. Total cost less than $25 if you play your cards right. Be careful, not all RGB LED strips are individually addressable. For another project, a race tree, I just soldered 14 individual neopixels together, but for this many, maybe a strip would work better. Mine came on a wafer of 50 for maybe $8, somewheres on eBay. Have fun! Here is info on neopixels. https://learn.adafruit.com/,

If you want to make it interactive

Yeah multiple people commented at the party that they would love to see an interactive version. Thanks for the info!

Using just an MCU is cool but you can also get a gesture sensor.
use hand gestures to control the lights as well. This is what I was thinking.
I have created code for lights before. Would be simple to do.