I have modified my X-Carve 1000mm with LED strips on both sides of the Y axis sides and under the X axis carriage. I purchased a 5 meter (16 ft) from wish.com for about $6. The LED strip has an adhesive backing. I ran the two wires from the right side back to the left side back, joined them together, then to the 12 volt power supply.
I also placed a strip under the X axis and wired it through the regular wiring and then to the 12 volt power supply.
I made my own 12 volt power supply from an old computer power supply. I soldered all of the yellow wires together (12 volt plus) and all of the black together (minus or ground). I also wired the green and one black together as the on switch. I wired the power supply to a power strip and use the switch to turn the LEDs on and off.I had plenty of LEDs from the strip left to wire the insides of my cabinet. The LEDs provide plenty of light for my workpieces. 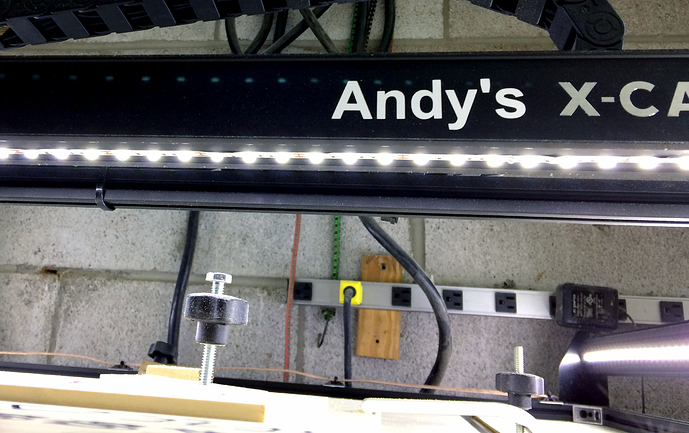 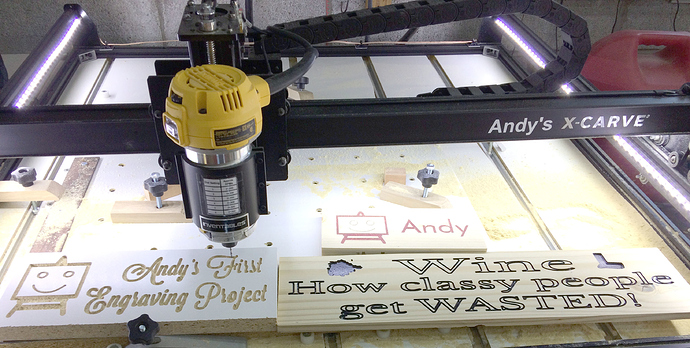 I was just about to say the same thing! Almost any LED’s you buy from china will have terrible adhesive. I usually use hot glue or 3m double sided tape. However I have yet to find any 3m tape the same width as leds

I love that DEWALT SPEEDS STICKER!

That is brilliant!!! (see what I did there…

Stealing your idea and totally adding my name in front of the X-Carve as well !!!

Yes, I also have a vinyl cutter and just cut out my name in silver vinyl. My friends think I ordered that way. I’ll let them think what they want. Thanks for your comment.

I’m now sitting here debating on doing this same thing… My OCD is keeping me from doing it, scared it won’t look neat.

I’ve been amassing parts so I can take the machine apart and do a bunch of mods and upgrades all at the same time. I have had a roll of LEDs sitting and waiting to do just this but was on the fence if it would actually make enough light. I like it.

This is straight up awesome.

I like this. I have some lighting but you can’t have too much. 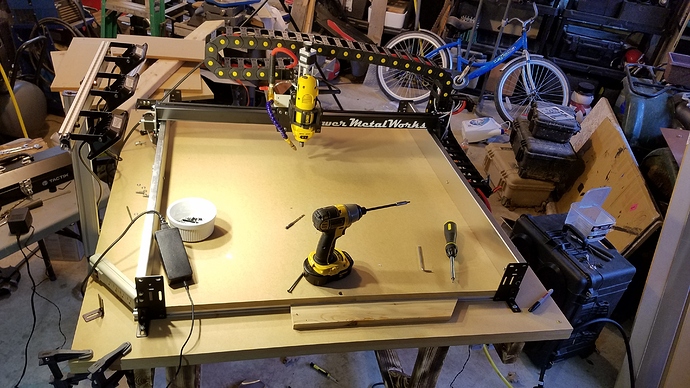 Please no. I actually have some black pcb led strips thst should blend in a bit more with the Xcarve. I think I might do it

I did use the “bright white” LED strip. There are some that are on the warm side. Just as a postscript, I have 12 16 foot strips glued with contact cement on my shop ceiling. I power that with an old computer power supply mounted on a wooden beam and plugged into the single light socket. They actually provide quite a bit of light All of those LED strips together draw 87 watts, less than a normal light bulb.

I’ve been trying to convince my dad to do the same thing for years. He has a massive garage with these 4footX2 foot fixtures about 12 of them with 4 t8 bulbs each. Most of them are all burnt out and not working.

What’s with the yellow stickers on the drag chain? Or did that come like that? Also love that hose setup! I wonder if I’d be able to fit a hose in my drag chain.

Opted to just do the X axis for now. Tested my LEDs on the Y axes and didn’t seem to be bright enough to help the work area, so instead I put 2 strips on the X axis. Sprayed the 3M adhesive backing with spray adhesive then stuck them (we’ll see how it holds up) in place fairly straight. Ran a wire through the Y axis drag chain and hooking up to the XC power supply. Will put a switch on it once I get one. 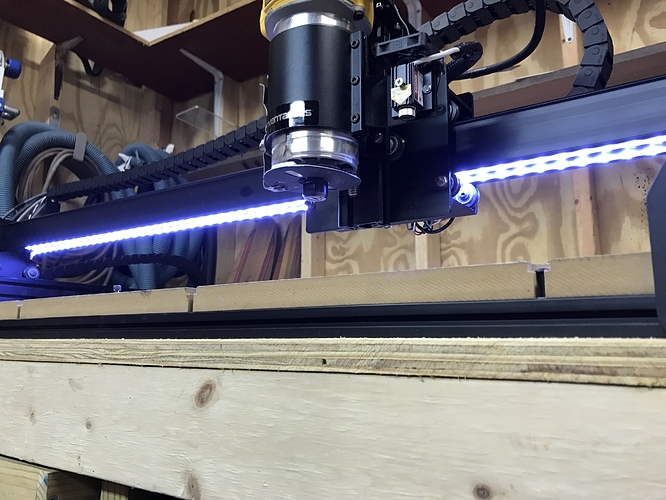 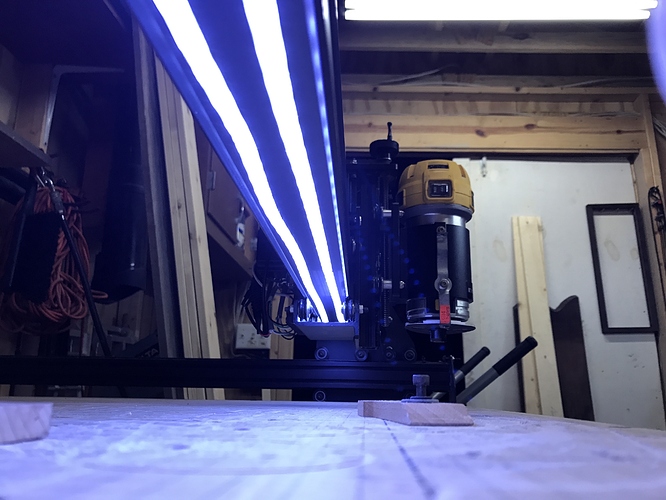 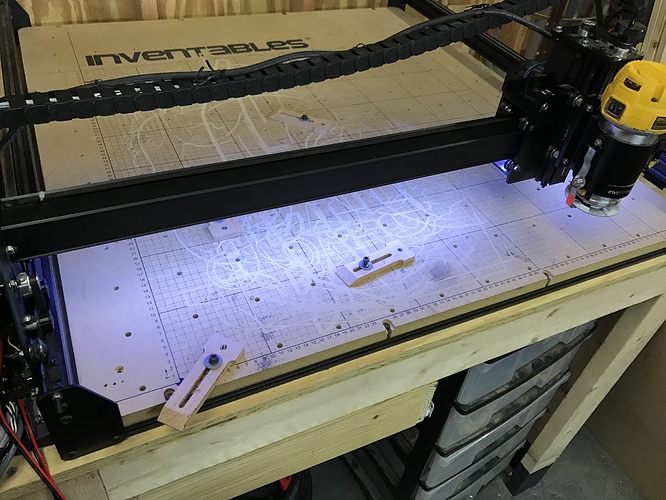 And to see it in action…

I added some Black acrylic as dust shields today and I am running LED’s down the sides as well. I tested the lights and they seem pretty bright. No pics with the LEDs on as I am printing a mount for them now. Excuse the mess 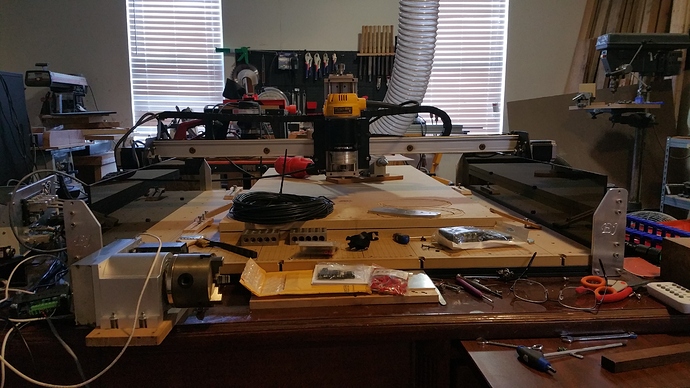 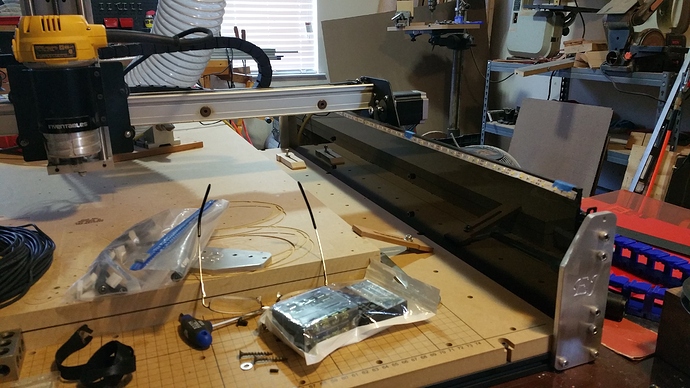 wish i could find some black acrylic

Nice job Micha. I’m glad everyone likes the LED additions. I’m an outside the box thinker and I’m now looking at a 144 LED microscope light ring from wish.com for the bottom of the router. The light ring will accept a diameter of 61mm (2.4 in). I may need to make a thin 2.4" or so plastic adapter for the bottom of the DeWalt. The light and power supply run about $17. This should provide plenty of light at the cutting surface.

wish i could find some black acrylic

Could you paint clear acrylic?

If you wanted to get real technical you could always tap into the stock led in the router for your power instead of running individual lines.