Preface
I picked up a Shapeoko2 build last Jan ’15 to get my feet wet in CNC after having built and modded my MendelMax 2 3D printer. Shortly after it arrived, Inventables released the X-Carve. The project went into a bit of a hiatus as I decided I wanted to use a few X-Carve parts for the build and waited for availability of said parts. I decided to use the Makita RT0701C since it goes down to 10K RPM as opposed to the Dewalt DWP611’s 16K. I know the Dewalt can be driven lower by using the SuperPID, but at $155 it does add cost and the Dewalt is heavier than the Makita. In the future, I think I can better use that money toward a proper VFD spindle.

The dust shoe goal
There are quite a few dust shoe options for the Dewalt, but not nearly as many for the Makita. There are few like the Plexiglas rigged up jobs or the 3D printed option form the Norwegian group (http://www.norwegiancreations.com/2014/08/an-open-source-cnc-dust-shoe/). So I decided to come up with a simple to use, relatively easy to print, solid dust shoe that uses easy to source replaceable parts such as the brush and magnets. Since the Makita doesn’t have the two screws on the bottom like the Dewalt, I did need to come up with a way to attach the shoe to the machine.

I present to you, the MShoe. 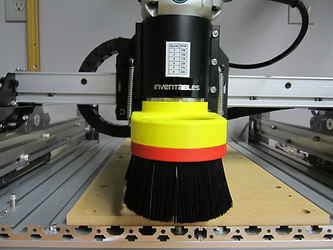 The upper part features channels to deflect the router air off to the sides. It accepts a 2.5 in Rigid shop vac hose. There is a small notch that keys into the router body to prevent the shoe from rotating around. I have mine mounted via a couple of springs along the sides, but a single strip on the left side could also be used. On the bottom there are 8 small recesses for magnets. I used some ¼” magnets, that are actually closer to 8mm, I found at Hobby Lobby (http://www.hobbylobby.com/Crafts-Hobbies/Basic-Crafts/Magnets/8mm-Power-Magnets/p/74984). They are about 3.5 mm thick and they are held in with Go2 Glue (http://www.loctiteproducts.com/p/go2_glue/overview/Go2-Glue.htm). It has some give, like a really thick caulk, which I thought might be better at resisting the impact action of attaching and removing the lower part of the dust shoe. Also it makes it possible to pry the magnets out so they can be reused if the dust shoe needed to be replaced. Other glues such as CA (Super Glue) or Elmer’s School (PVA), or wood glue could be used. 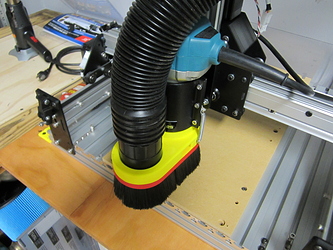 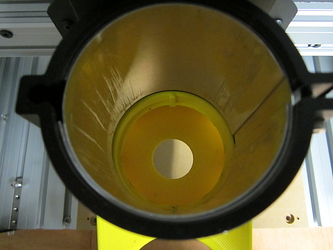 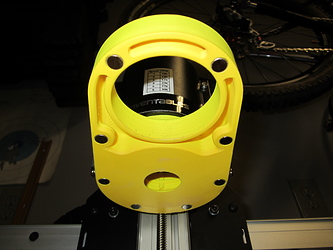 The lower part has matching contours and magnet recesses. Mainly it features a channel for holding the brush material. I used the McMaster Carr Easy-Cut Strip Brush 2” PN 7900T5. No glue or fasteners needed. Simply wedge the brush into the channel and push down firmly on the rubber edging with a flat head screwdriver to push it completely down into the channel. The channel also cants the brush at a 5 degree outward angle so the brush nicely spreads out against the workpiece rather than bunch up or under the dust shoe where it could resist downward travel or get pulled into the bit. 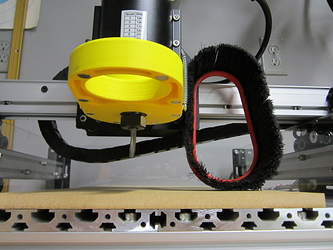 I’m also including two extra versions, one with a more tapered front to reduce the amount of material used to print it and remove the need for supports in the front half of the shoe. The other one has a 2.5” hose boss for attaching dust collection hose directly to it. 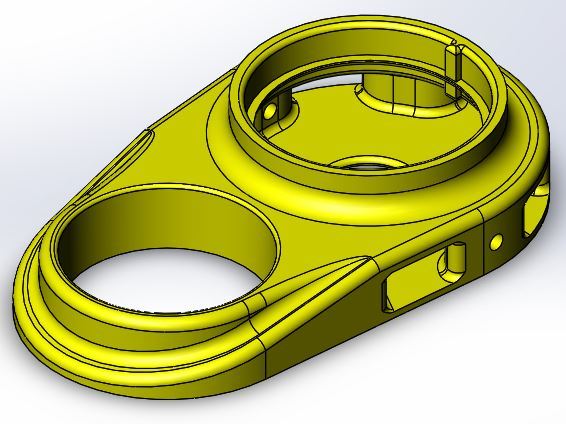 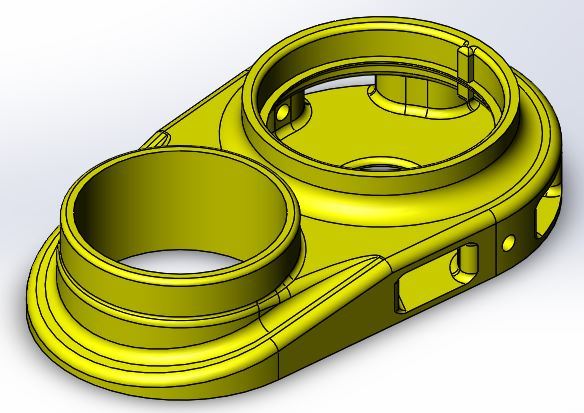 That is nice work man!

Now I need to get my act together and build myself a 3d printer!

It looks very nice indeed. How does access to the spindle lock work?

Lock access is the one part of the design that I’m not too happy with. I looked at doing cut aways or possibly making the openings taller with limited success. If I open up a cut away section it means that some of the “floor” of the diverter part will be missing and thereby possibly allowing chips and dust to get flung out. If I make the openings taller by making the whole shoe taller, it eats away at some of the Z travel space.

The lock button lines up at about the 10 or 11 o’clock position and I find that I can stick my finger in the vent hole to access the button.

I tried to see if the lock button comes apart, so I could possibly make a longer red button, but the parts breakdown shows that the red button appears permanently pressed onto the lock shaft. Removal of which would probably destroy the original and I’m not looking into that since I would still like to use the router outside of the machine.

Love this design, likeit so much better then the norwegian one i have been using… Only issue is I cant have the bottom boot with brush on, no matter what glue I use the bugger magnets keep coming out! Might need to find a way to retweak the design somehow to insert magnets throught the side so they are captive that way…Do you have the source file available at all??

The STL files are attached to the first post.

I mean the source files the part was designed it, its hard to make changes to an stl file

Most CAD programs will import STL which can then be saved in a native format. For example both Sketchup and Fustion360 both do this.
I would have attached a Sketchup version but the forum doesn’t seem to like the file type.

What file format are you looking for or can work with? IGES, STEP, etc.

There are a few concerns with making the magnets come in from the side.

What kind of glue are you using that is giving you so much trouble? I have been using mine for about a month a half now and the magnets are good and snug. One thing might be to make sure the magnets are free of oils and cleaned with alcohol before setting them in the glue to make sure they get a good bond. Using a glue or caulk that will provide some shock resistance might work better. Another option might be to scuff up the magnets with some sand paper to help the glue grip the magnet.

Hi a step file would be great, I can work with that. I have tried all different sorts, I have tried CA, PVA, Silicone caulk, Liquid nail, epoxy putty still after 3-10 detaches the magnets come out. What material are you printing the boot? im doing PLA because I cant do ABS, maybe that could be the difference?

Ive done some testing and the distance wont be too much of an issue, but will definitely have to accommodate for the magnets.

Mine is printed in PLA as well and the glue I used was the Loctite Go2Glue I mentioned in my first post.

Thanks for the files , I printed them and they are perfect.
I had the same problem with the lock button but you can take the red button off.
I did that and replace the shaft with a longer bolt. So i can you the lock again. 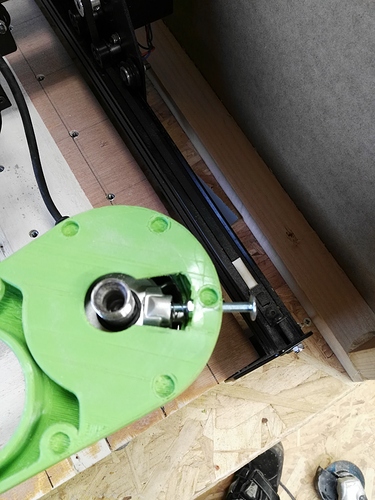 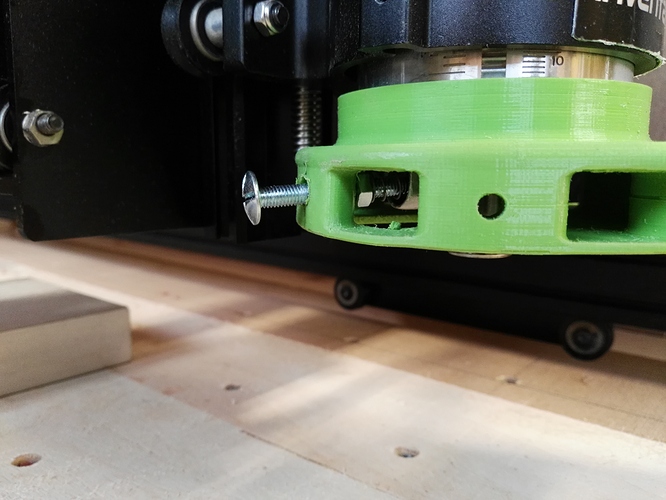 Now just waiting for the magnets arrive. Then its complete for use. I think I print the bottom twice so I can make one with shorter and one with longer brush on it.

Excuses fot bad English but I live in Belgium Europe.

Glad you like it. No problem, your English is great

I have been working on a version that addresses the lock button issue. I was thinking of not modifying the router button as I sometimes use the router on it’s own. My idea was to use a spring loaded extension for the button. I’ve been busy with a few other things though and i wasn’t sure of the angle of the button in reference to the slot in the body of the router.

But here is a preview. Similar to yours, it will have a spring to retract the bolt. 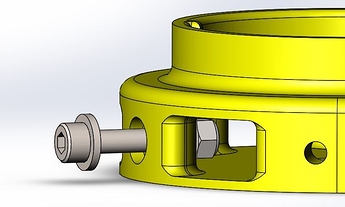 Here is a smaller one I’m working on. Considering that the router doesn’t blow that hard when using the lower RPM’s (10K-12K) and the fact that I’m using 2.5in hose with a large shop vac that sucks like a tornado, I figured why not forgo diverting the air all together. I’ll probably print it out this weekend and try it out. 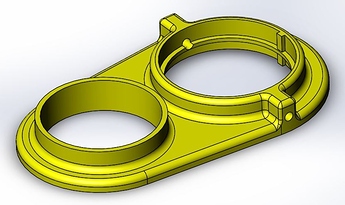 I can confirm not diverting the air works fine, I took your design udea and modified it to cut out of 9.5mm acrylic, this lets me see the cutter in action. The whole is big enough it still allows airflow from the spindle, and this air actually helps to dislodge particles and let the vaccuum suck up. Also I can reach the lock button to change tools as well which is a bonus. 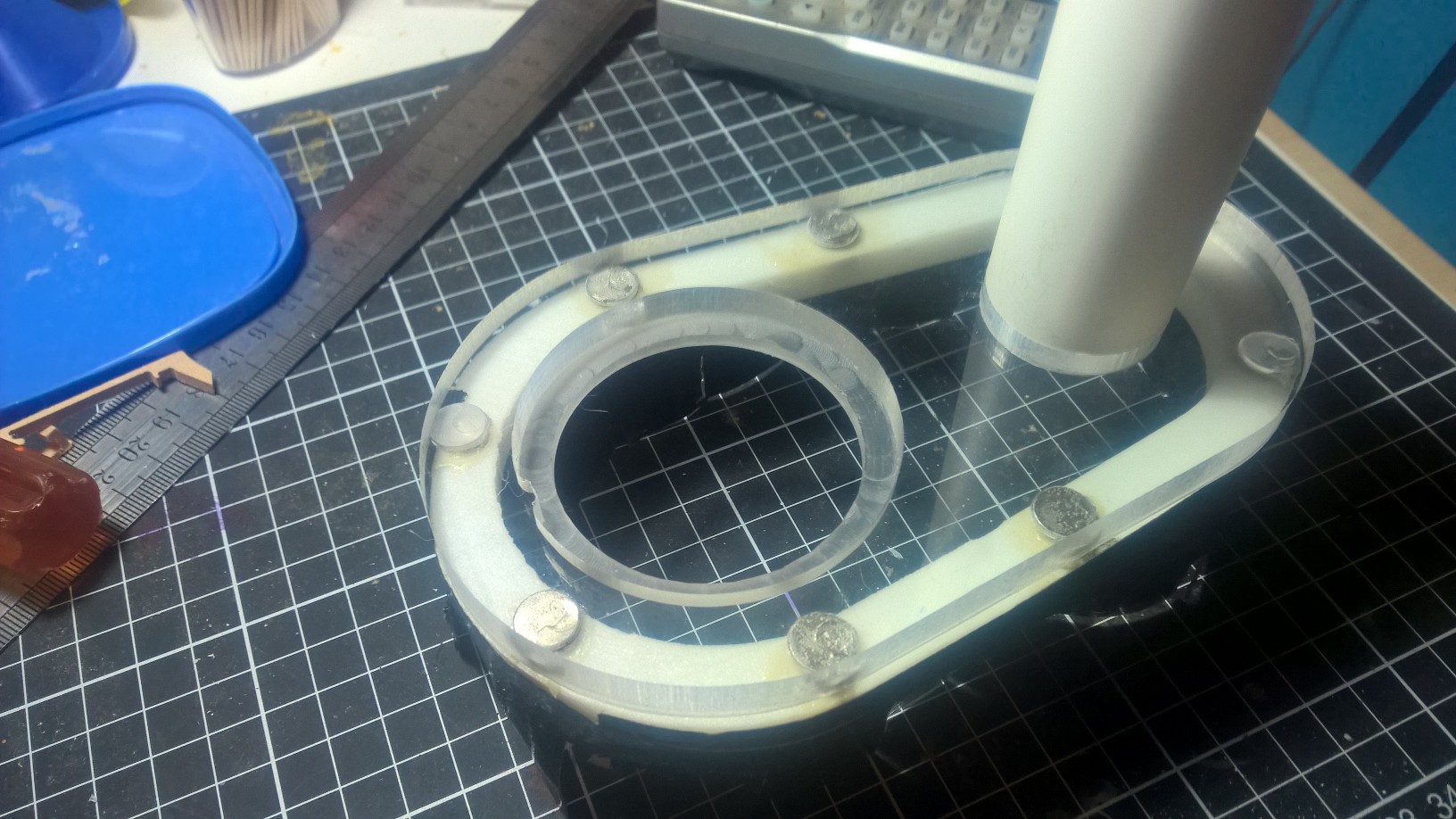 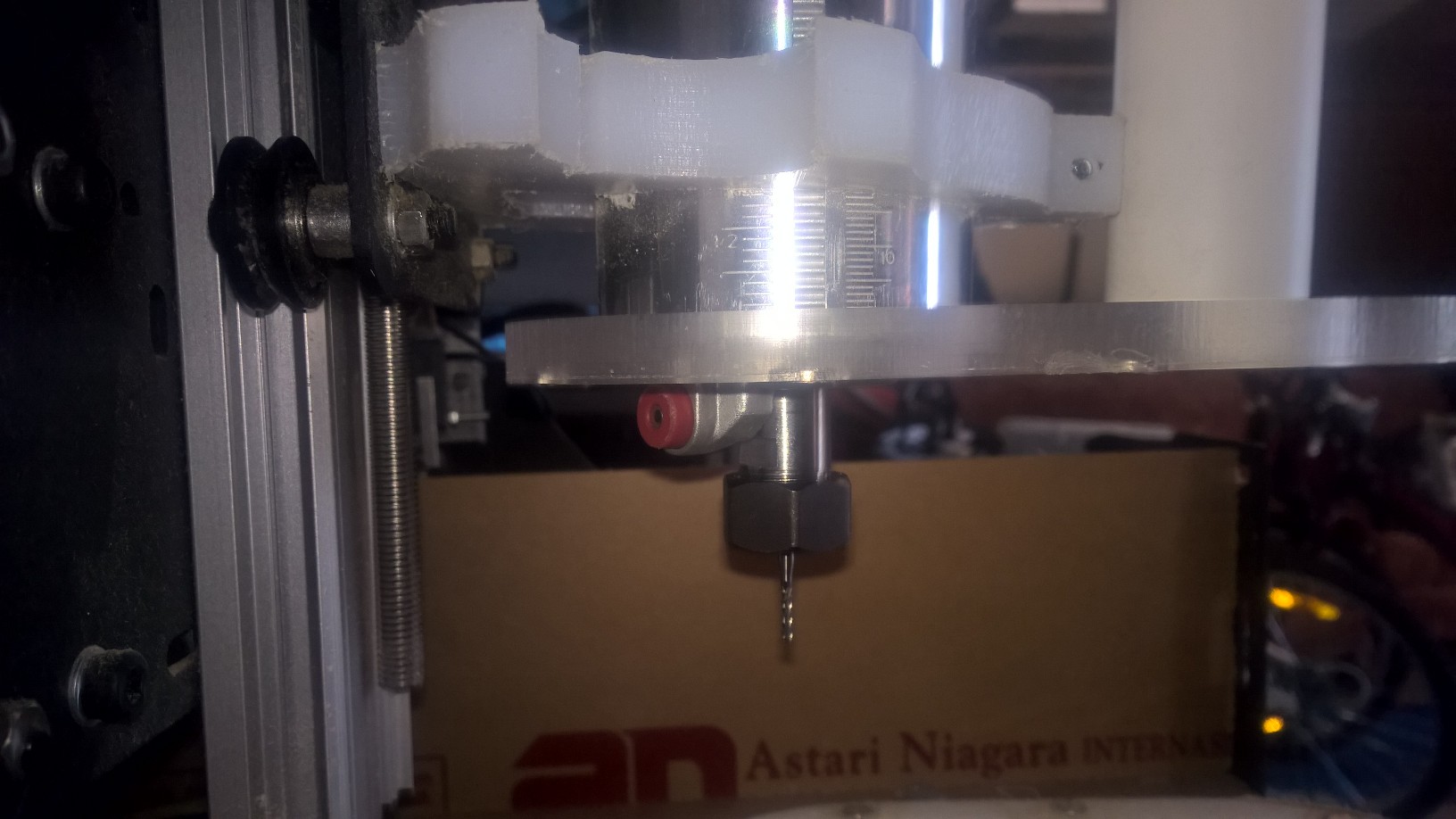 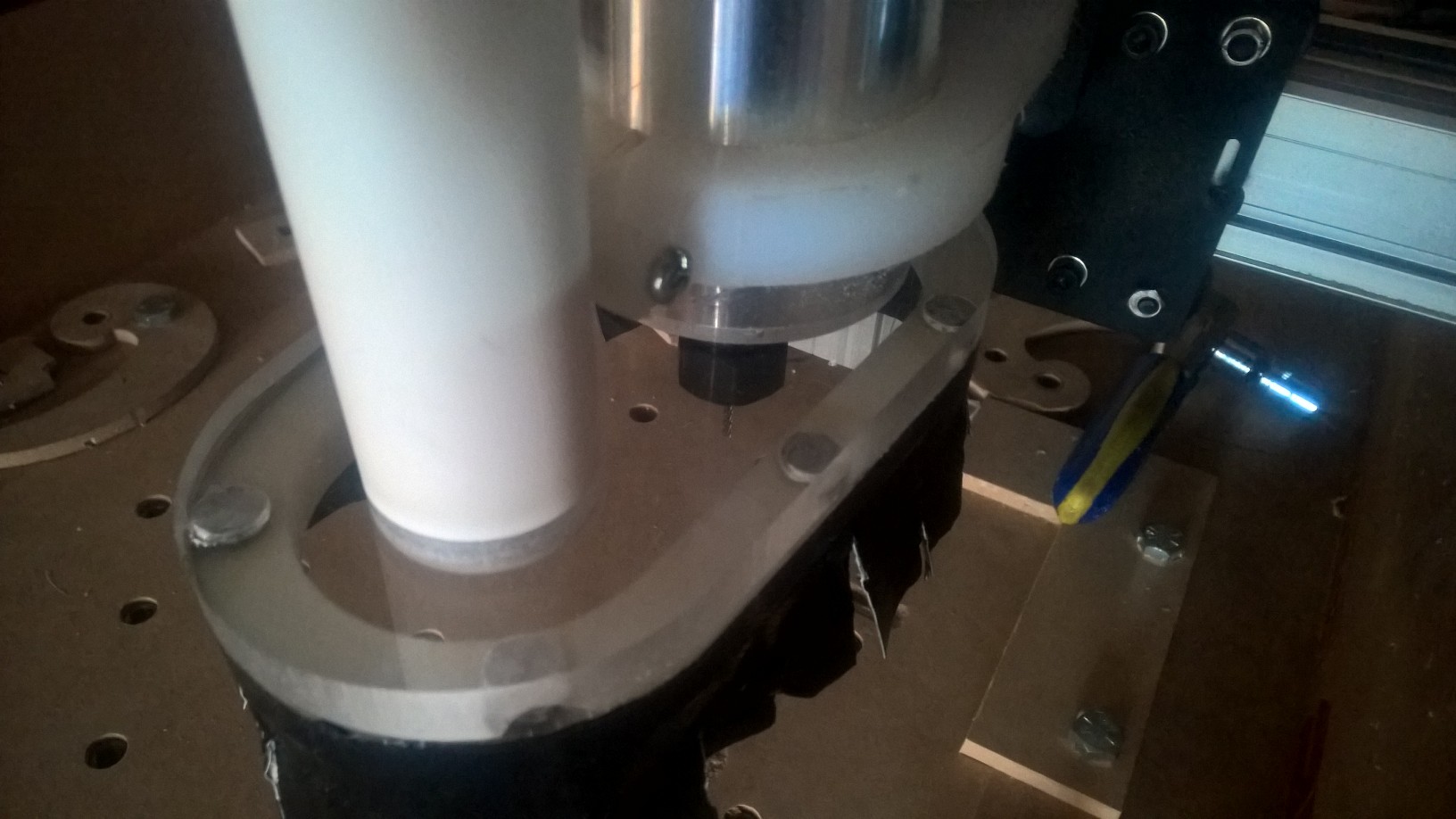 Here is a smaller one I’m working on. Considering that the router doesn’t blow that hard when using the lower RPM’s (10K-12K) and the fact that I’m using 2.5in hose with a large shop vac that sucks like a tornado, I figured why not forgo diverting the air all together. I’ll probably print it out this weekend and try it out

Do you have STL files for this one?

Haven’t had time to test it out yet, other house projects…
But here is what I came up with. 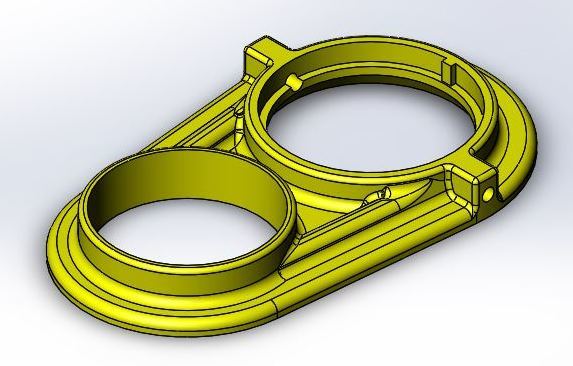 Finished the calibration and testing on the 3d printer after a bit of a refit and I’ve just started to print the dust shoe (V1)
I’ll know in the next 5 hours or so how successful I’ve been. http://i.imgur.com/Z0TReQr.jpg

EDIT Two hours in and fail. Looks like some more tuning on the printer is needed.

Try the last one I posted, V8. No supports needed, and full access to the lock button and collet. Also it’s about half the height and I got mine printed in about 5 hours.

Is that an Ordbot variant using Makerslide for the rails? Cool printer, I’m using a MendelMax 2.
What was the print failure?

Problem was (I think) that I had the PLA too hot. The blue tape I was printing on lifted when the print curled. I’ll drop the temperature and try printing on a heated bed (glass) when I give V8 a try,

It’s a stock standard OrdHadron but with a j-head hot end instead of the crappy QUBD extruder it came with.

Is anything stopping us from making a CNC’ed version instead of printing. Has to be less than 5 hours.