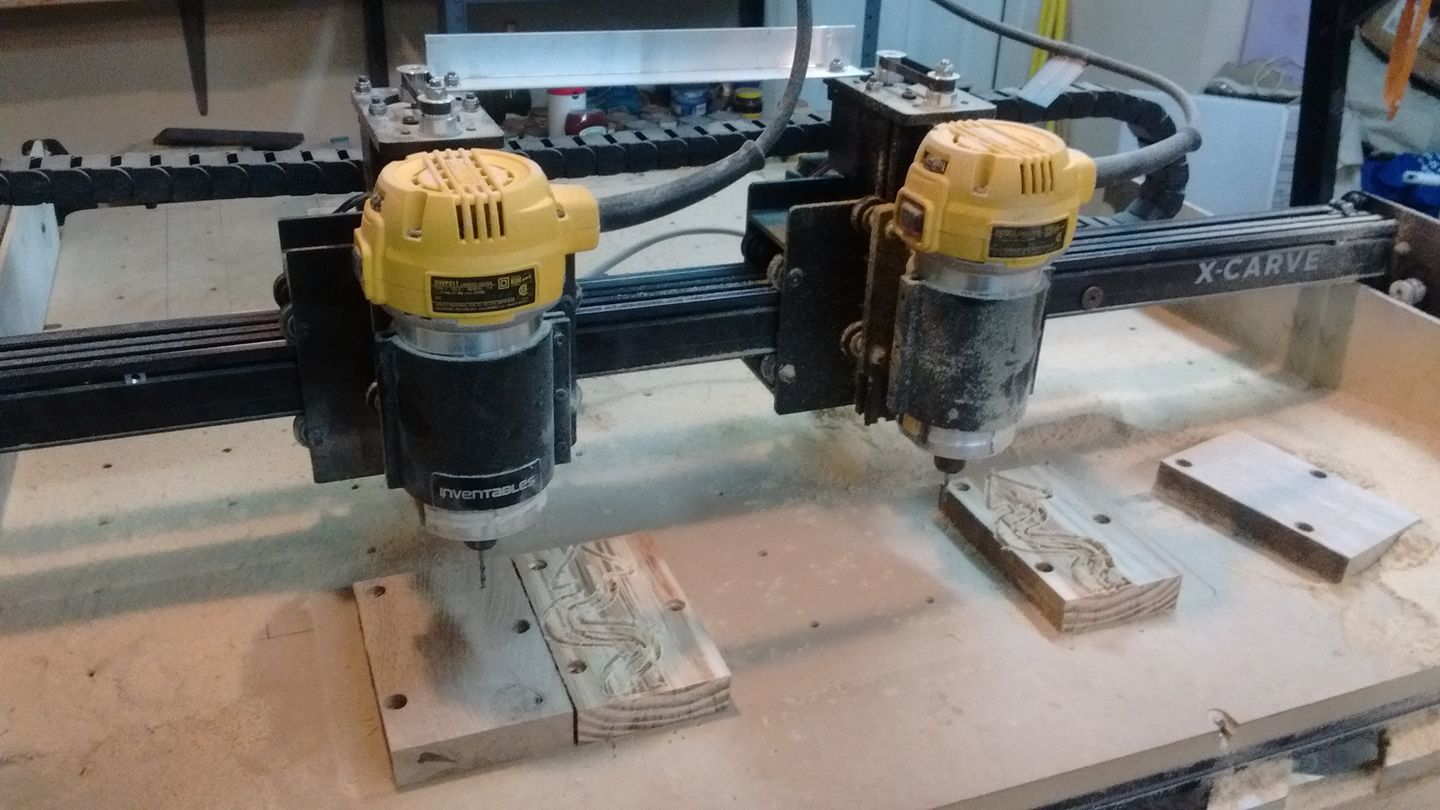 Has anyone tried this before? I was fantasizing about putting nine routers on one table (three on each of three X rails) however, it seems that the controller won’t push these two consistently.
Whadyall think? Any suggestions?

Single controller. I didn’t think I could get them synchronized with each a separate controller. I do have the second controller, but how would I get easel to recognize both at the same time??

I am in the process of building such a machine. I am using Mach 3 with an addon screen set that allows me to run up to six axis’s. On the left hand carriage is a Makita 701 with a linear rail and on the right is a Hitachi 12vc also with a linear rail.My approximate usable size is (depending how you set it up) around 25" x25", enough for use with V Carve desktop. Although it’s possible to run both carriages at once you would have very sever conflict problems between the two carriages. I also have 175 oz/inch motors with self contained motor drivers.Sorr, no pics yet.

one controller.The Hitachi is used for the big work while the Makita is for the finer work although the Hitachi will also run smaller bits.How you set it up is whatever you wish as long as you understand that you can only run one spindlwe at any given moment.

Yes, I was wanting to run multiple copies simultaneously.

Not doable. How would you control both Y axis with different coordinates at the same time.

With three carriages how would you find the space for each axis to move at the same time or even singularly for that matter.There would be virtually no room for them to move.

Good point, Clyde. I assumed I would hook the Y’s in series with one controller for all. Seems to me like it would work if I had the right controller. The carriages don’t need to move much, (as I make small things) and they all be moving the same way at the same time.

Your not going o find “the right controller” simply because it don’t exist. I researched mine for over two years before I even though about turning a bolt.Trying to write the software that would do two at the same time would be a nightmare even if you, at the present, produce small things. There’s just to many conflicts involved to make it work.

Well, thanks for your help Clyde.

Tell me, Kasey, why?

I don’t see it being the safest thing to do. If one carve messes up and you got to fix it your going to toss your hands in there while another carve just next to it is running? And even if you ran the emergency stop to shut off all the carves. That’s x amount of carves that you have to redo. That combined with the limited amount of space we already have to play with. I feel like by time you invest all thst money you’d almost be better off buying a commercial cnc that will let you cut way larger pieces and at a much faster rate. Just my two cents. I’m not bashing the idea.

Okay, thank you for your input.

Don’t give up on your idea.I have just finished the machanicals on mine last night. The idea of TWO carriages is very feasible but trying to get both spindles to work together like you wish just isn’t practical. The way I’ve set mine up gives me incredible choices for setting up for production work. I’m almost only limited by my imagination on how to configure my machine. I’m setting mine up to use fixtures and pallets. My software allows me to do automatic tool changes on the Z axis and semi-auto on the C axis. In fact, I’m creating my own tool holders so I can just loosen the collet and slip in a different tool and hit the start button and return to last work co-ordinates.

Clyde, I don’t need to make anything more than one design about a million times.

How can I make the x-carve do this?

I would think you would have to increase the size, use a controller capable of pushing enough current to run several steppers tied to one driver (z-axis motors) all mounted on a single gantry that moves all together in the X-Axis. Due to the weight, some pretty big steppers would have to be on the X and Ys.