Based on the great work @PhilJohnson published, I started to plan my build for a new controller. I don’t have the wall space available for a 3 foot box such as the demon Phil built and wanted to add some editions such as including my relay to control auto on/off with dual sockets for my spindle and my shop vac and include the power supply. The bottom layer holds the power supply, above are the 4 drivers with in and out heat flow by two fans on the front and rear. The next level will have terminal blocks to keep things neat followed by the top shelf for the arduino, my limit filter and relay. it will have in and out flow fans as well and two rear power sockets for the relay and will place my emergency stop on top of the enclosure. Still playing around with the final layout as you can see below, so if you have any suggestions I’d love to hear them. The box will be about a foot tall by 6 in wide and 10 in deep. You know the old saying “Plan your work, work your plan”. 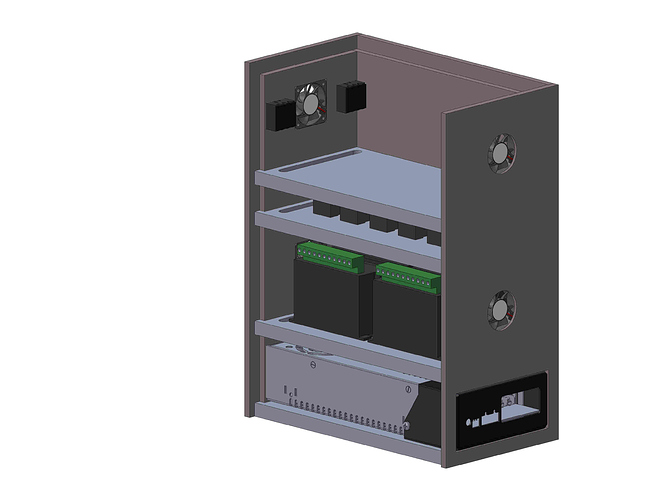 Some how buying a bigger house to live in just for my X-carve might be pushing it, lol

is that going to be enough air flow for the power supply?

My first enclosure for the old Arduino/GShield combo failed because I made it too compact even with a 90mm fan blowing directly on the drivers*. Lesson learned… Don’t underestimate the need for good airflow. There’s probably a reason why computer cases have big holes with massive fans.

*Those drivers got really, really hot if you pushed them too hard. I eventually had to put heat sinks on them to stop it from going into thermal shutdown. It’s less of a problem for drivers that can handle higher current, of course.

an blowing directly on the drivers*. Lesson learned… Don’t underestimate the need for good airflow.

In some cases (pun intended) extracting air is a more effective solution.
On one side of the case have intake vents and an extraction fan on the opposite side.
Make the fresh air pass the hottest components first.
YMMW

Just a couple of cents worth

Well I have direct air blowing in and out on the four drivers heat sinks, which i can’t imagine the heat sinks burning up to bad to begin with, but maybe you guys that have it know how hot they run. As far as With the Arduino, they don’t run hot at all, but what was running hot on yours was probably the original G shield who’s drivers were overheating. The power supply of course has a built-in fan and although you can’t see it in the picture but I do have slits going straight across on both sides and in the back to alleviate the air and have about 2 inches above the power supply.

Yup that’s how it’s set up

Here’s a photo of the first shelf with the drivers. This should give you an idea of how large the heat shrinks are, And you could see I have them all facing each other and the fan will be blowing directly down the middle and then out the other side through the reverse fan 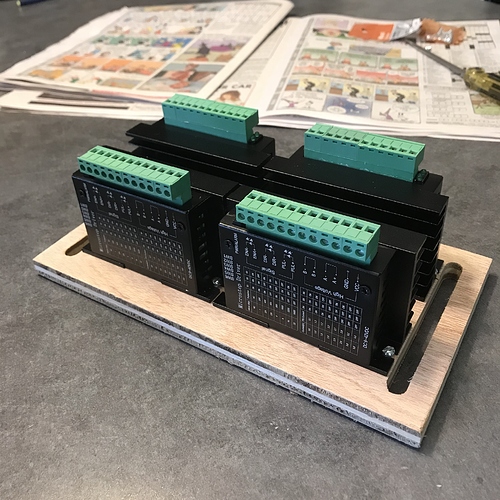 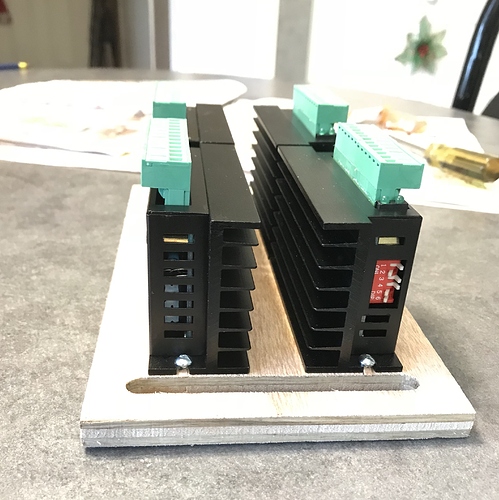 was going to mention it to you

Left is not right

It’s starting to stack up in 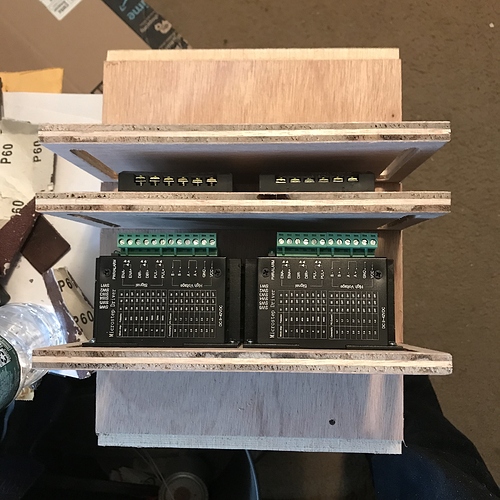 Coming together nicely, waiting on to more fans to arrive. Tomorrow I mill the front of the enclosure on the X-Carve then dismantle her electronics to pull the power supply and relay over to the new controller and start wiring everything up! Here’s a pic of the back with the two fans installed and the two outlets that will be attached to the relay for auto on/off of the router and dust collection. So the question is what color to paint the enclosure? Black or white? 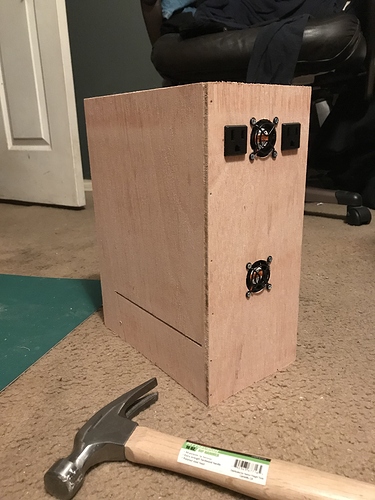 paint it with sawdust

Just noticed the 4 for fans I ordered are 12V, could of sworn I checked. Hate having to waste a good step down on 4 little fans!

Electric is not my strongest suit, have a diagram?

I bought these, I use them for the original box I made for my relay, but there only 12V. The one in the relay box is 24V, but can’t seem to find them. There only 40mm but move air very well