So I am making good progress on upgrading my 500m X carve with an aluminum t slot bed. Hopefully this might help anyone considering using the same extrusions.

I used two of the Misumi 250mm extrusions cut at the supplier to 500mm lengths. They came with a slight warp to them, but that seems to go away when they are bolted down to a 20x20 extrusion.

@JohnScherer recommended drilling through the Misumi extrusion to bolt it to the 20x20, but unfortunately, my mini milling, drilling, lathe setup was not up to the task of drilling something that big. So I drilled the 20x20 extrusions instead. I drilled a 7/32" hole through the 20x20 at positions along the length that matched the position of the small slots in the back of the Misumi extrusion (35mm, 215mm, 285mm and 465mm). Then I used a 10mm endmill to clear out enough space in the slot for the bolt head. I used a center punch and center drill to start the hole to try and ensure good placement, that might have been overkill.

The t-slots in the back and side of the Misumi extrusion are the same as in the 20x20 and makerslide. So I got some t-slot nuts and 20mm M5 bolts and placed the nuts in the Misumi slots, and bolted the extrusions down.

I haven’t tried putting it on the machine yet. My biggest concern is the clearance for the V-Wheels. The Misumi extrusion is 15mm thick, and the stock wasteboard is 12.65mm. Plus the extrusions go all the way to the side. Going by my tests, I have about 1mm of clearance between the bottom of the v-wheels and the top of the bed. If that doesn’t work, I can take advantage of the fact that the Misumi has the same slot on the side that the 20x20 does, and just bolt the end plates to that. That would also give me an extra 20mm of Z room if I want to use a vice or something.

Also, even though the 20x20s have removed the warp from the ends of the extrusions, there is still a little sag in the center where it is unsupported. So I think I might also add a third 20x20 to the middle.

Let me know if anyone has any suggestions, or questions. Also, be sure to check out John’s original thread in for sale. He might still have a pair of these for sale.

I have two Misumi, HFSQN4-15250-500 aluminum extrusions I used for the bed on my Shapeoko, but now that I'm upgrading to 1000mm, I don't have a need for them. If your building an X-Carve at 500x500mm, this is drilled and ready to go. It has a mark on one piece - I got careless when testing an auto tool-hight routine in LinuxCNC and it marked up the bed.. Its just cosmetic. New from Misumi there $55 +shipping for two. [image] [image] I'll trade them for an 1/4" aluminum spindle mount… 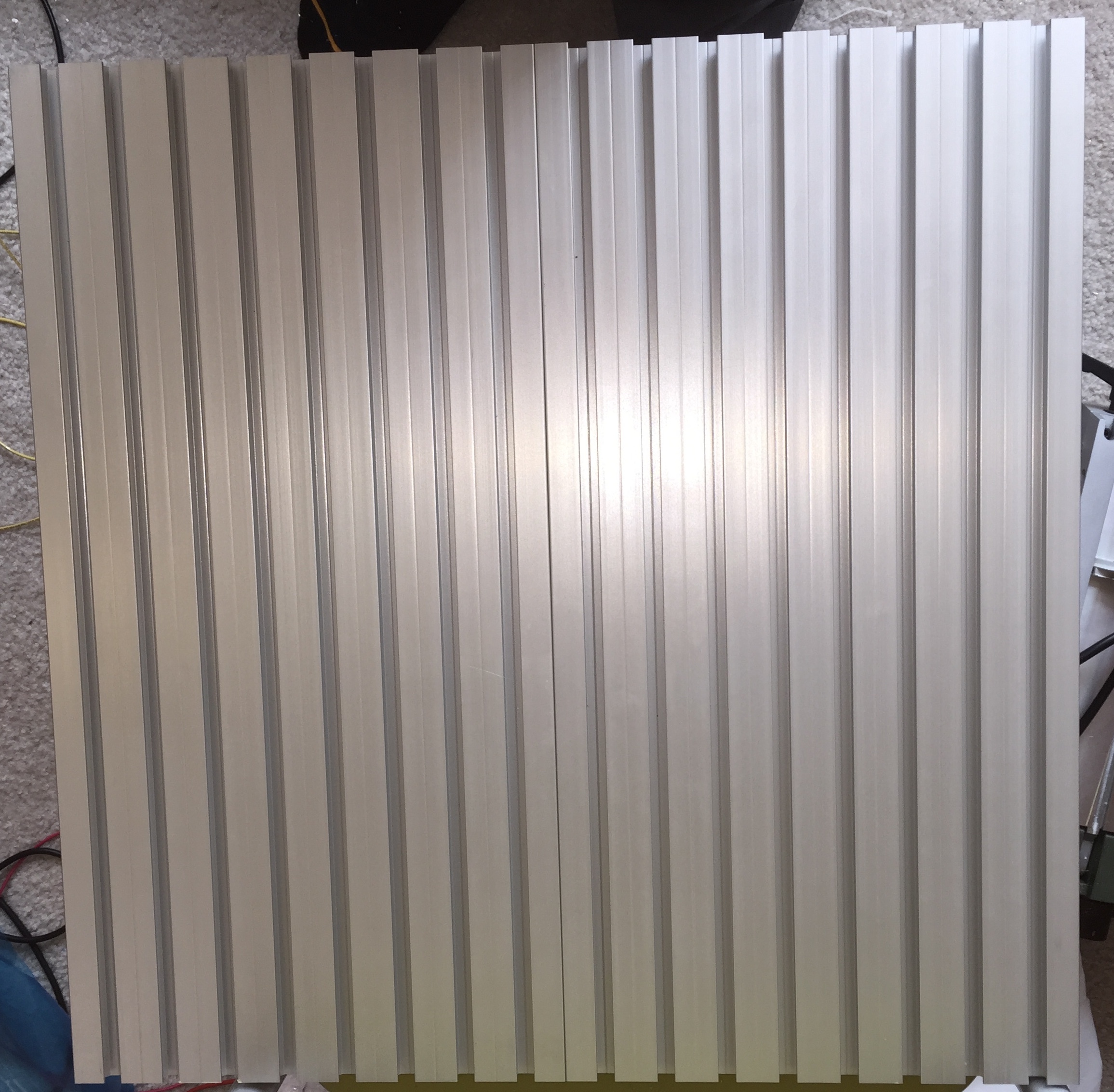 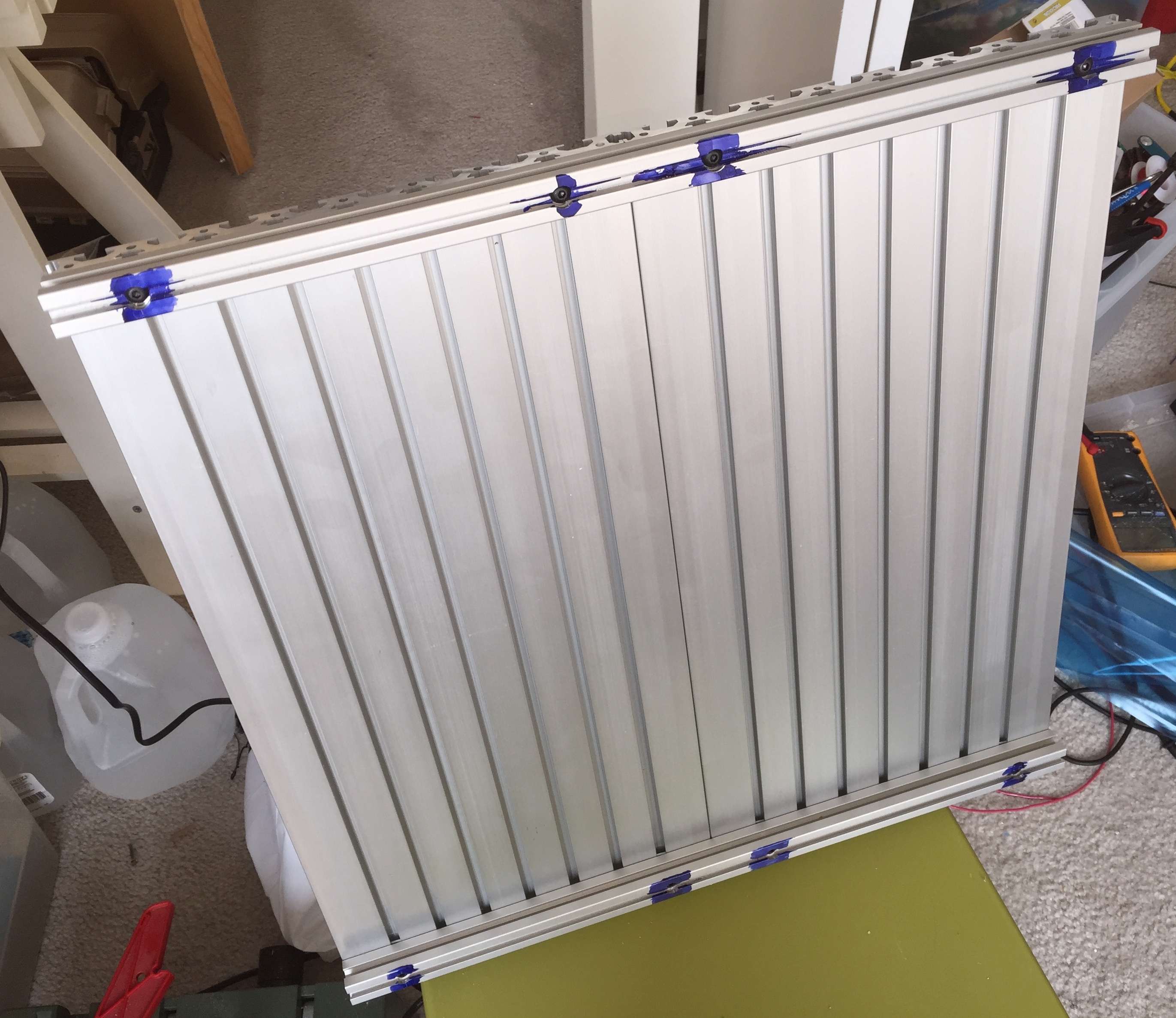 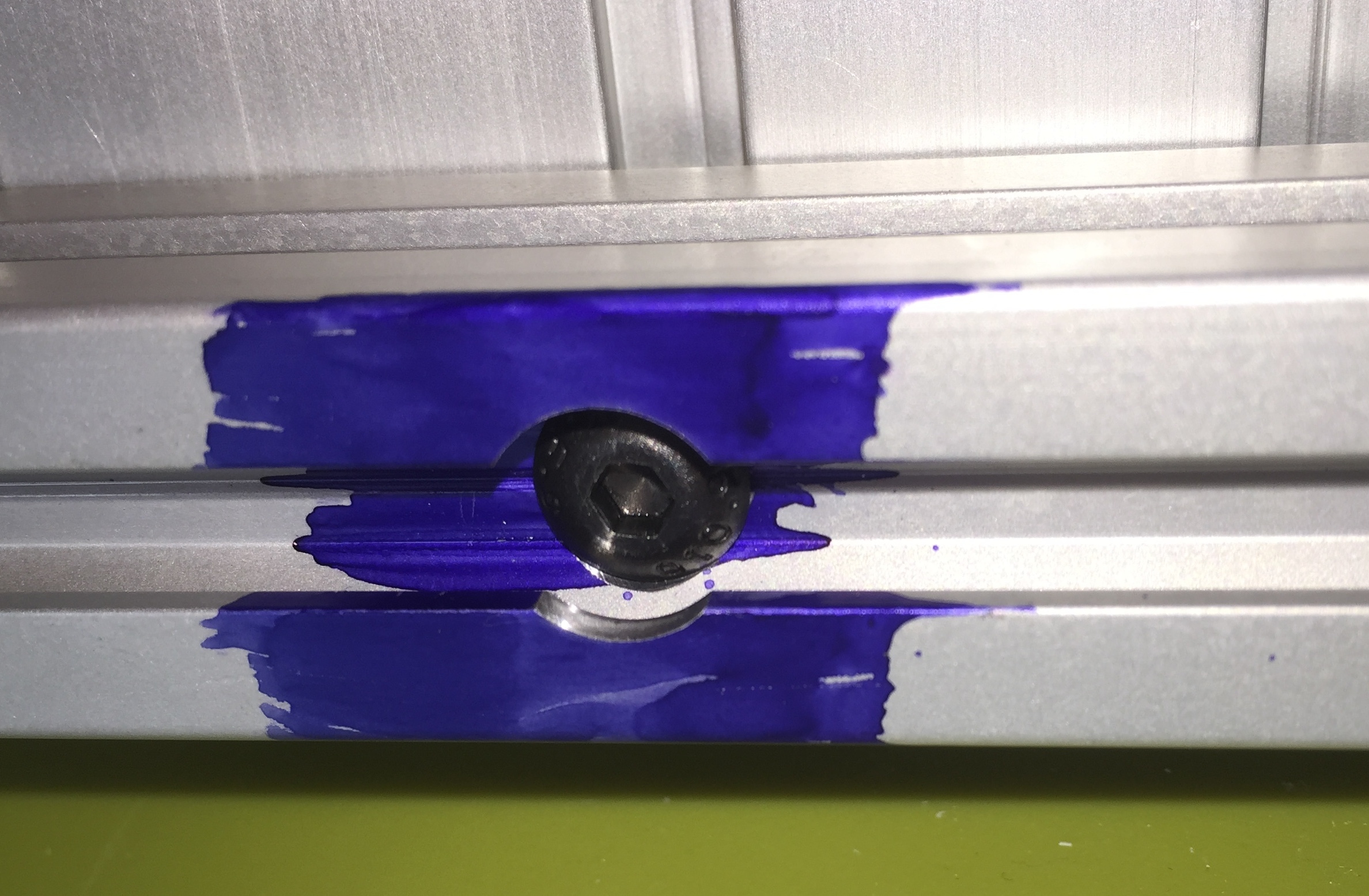 Very cool. I’ll probably be doing the same upgrade soon. Any ideas for clamping mechanisms? Obviously the t-slot nuts are an option.

I ordered some t-slot nuts from Misumi that match the larger slots, and have M6 threads. (Actually I ordered a ‘pack’ not knowing how big it was, so I think ended up with about 100 of them). With that I have a couple of small vises I can use and some step clamps. I’ll probably want to pick up some more small step clamps.

Would this also work for a 1000mm machine? I like the idea of an aluminum bed, besides the fixable warping issue, are there any disadvantages over the stock MDF that you have seen?

That would work. The bandsaw cut extrusions had a really nice finish on the ends, and where nice and square.

The extrusions are thicker than the wasteboard so you might have a clearance issue with the v wheels. I ended up bolting the end plates to the Misumi extrusion instead of the 20x20s to deal with this. This essentially rotates the machine by 90 degrees, but it also gives you about a centimeter or two of extra room on the Z axis.

Also, plan on adding some additional 20x20 extrusions to support this, and keep it nice and flat. And order some of the matching T-Slot nuts when you order the extrusions.

If you’re looking for something for your 1000x1000, I’ve kinda ended up with a hybrid table that’s a combination of T-Slot, threaded insert and MDF that works for me.

Built the machine on a table from Ikea. Sheet of ply on top of that (it’s surprisingly flat).

Screwed the T-Slot at intervals and filled the gaps between with MDF. Added threaded inserts into the MDF.

Machined the whole thing flat with a wide bit & then trimmed the corners where the tool couldn’t fit with a small plane.

Works perfectly. I can clamp with the T-Slots and if needed, I can reverse the T-Slot bolts and use the same clamps, bolts & knobs in the threaded inserts. 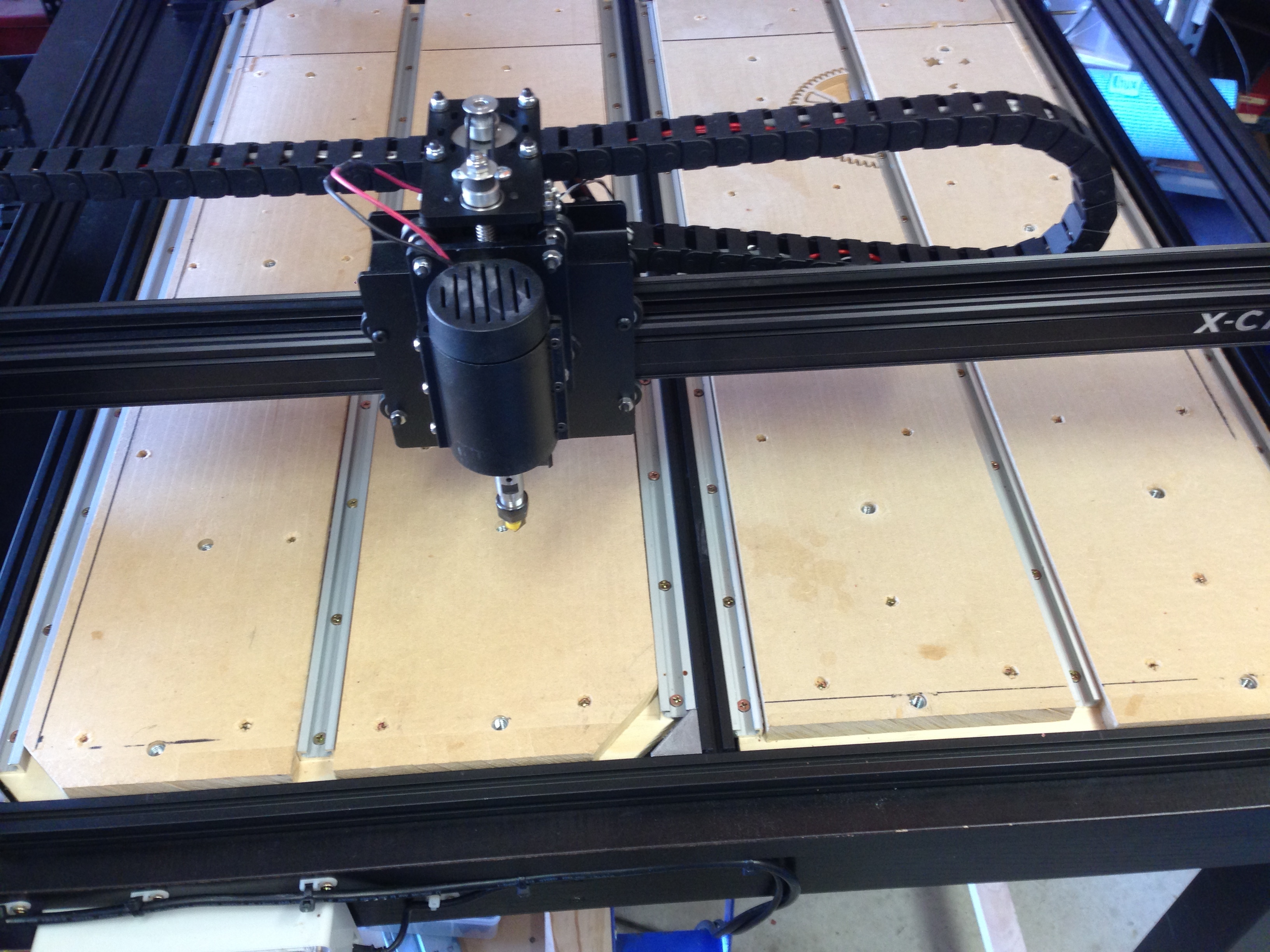 I just received these extrusions and am determining the best way to install.

On the other hand, I can bolt the end plates to the existing holes in the extrusions if I enlarge the plate holes a bit.

I didn’t have any problems mounting them as normal. Yes the V-wheels are very close to them, but they never actually rubbed running up and down the axis. I ended up drilling 8 holes (4 for each extrusion) in the 2020 then widened the slot to accept bolts and used tslot nuts in the misumi extrusion to clamp them together. I think this is the best way, no point in drilling through (and possibly marring) those brand new extrusions.

I found that I didn’t have a bit big enough for making that large hole for the screw head, so I just used M6 x 30mmm screws and will add some rubber feet to the bottom of the 2020s. Also, I printed up a batch of t-slot nut adapters so that I could use regular, M6 nuts to attach the 2020s to the Misumis.I also had to add an M8 washer to keep the screw from bottoming-out in the Misumi. 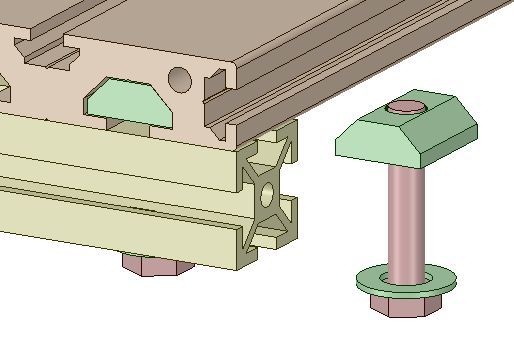 Now to figure out how to get this under the x-carve by myself.

Update
Well, that was fun! It’s a really tight fit between the y-plates and the new extrusions.

Next up, I need to redo my y-axis dust shields and determine how to adjust my work-holding parts.

Well, I just christened it… 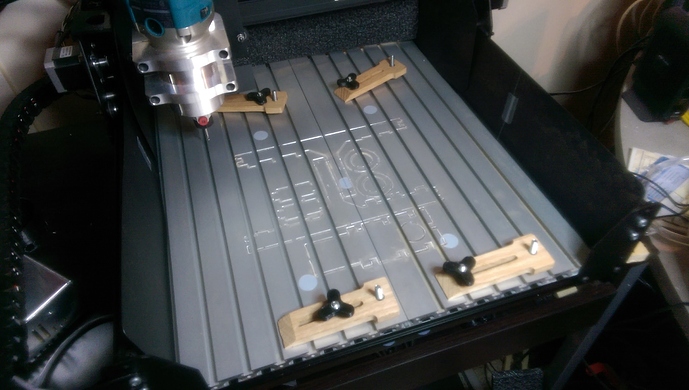 The plan was to be 0.005" deeper than the material. Now I need to measure the depth of those gouges…

woah, get a wasteboard. you don’t wanna destroy that shiny new bed

There aren’t that many topics on a metal med for the X-carve, and I’m wondering if anyone else here has moved on to a metal bed? Me personally, I’m looking for a something more durable than our current wood waste board situation. I’m considering either the Misumi extrusions mentioned here for possibly getting a bunch of the metal extrusions similar to what’s already used on the x-carve. Thoughts?