New Calendar for the New Year!

Just wanted to share a project I just made for a client. It is a 24" Aztec Calendar that is V-Carved from Mahogany with my X-Carve. I used the V-Carve feature in Aspire to set up the SVG and make the G-Code and then used PIC Sender to send the VERY large G-Code file to my X-Carve. 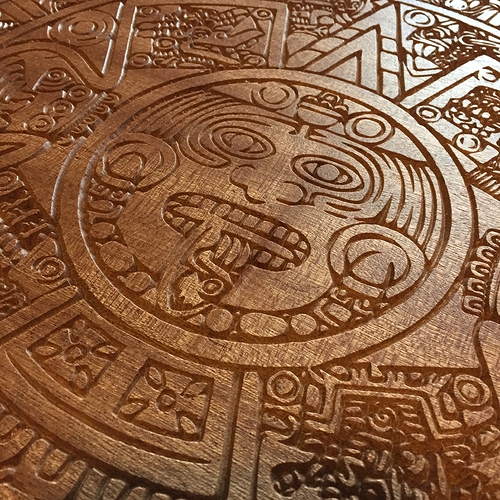 how long did it take? looks great!

It took roughly about 8 hours to carve!

Stunning! Are you going to leave the relief cuts bare or try to paint/darken them somehow?

This one will be left natural with just water based poly as the top coat. I have used paint and stains on previous projects to make contrast and show the detail.

Very nice and thank you for sharing. Posts like this inspire newbies like me to go to the next level.

Can you share a little bit about how you set up the wood? It’s a 24" circle, did you glue up smaller boards, or how did you create the starting piece?

Nice job @MikeMerzke - some time ago I tried carving the same image and was about four hours into it when UGS siezed up and came to a stop. In the process of tring to sort it out I lost zero and so had to abandon the job. I’ve never tried again since.

I used V Carve to create my version of the code which I think had something like a couple of hundred thousand lines in it. What do you use to send it to your machine? UGS? Did you do it in one gcode file, or break it up into smaller chunks?

Really Nice job, the detail looks outstanding. How do you handle an 8 hour carve in terms of watching for any potential crisis? When I first got my machine I would go inside and check on the machine every ten minutes but I ended up with several ruined carves, broken bits and so on. Now I just sit there and watch the whole time. Are you monitoring the spindle for overheating or does it handle this long of a carve just fine?

Thanks everyone for the comments.

@RyanRoberts I agree, the point some people miss is that it is something that the care you take in setting it up and making sure it is square and true will show in the performance of this tool. Some people want to plug it in like a drill and it just works. I know shops that have “commercial” CNCs and have service techs visit regularly to either keep it going or to fix it.

@Mike I use rough cut lumber and then mill it down to roughly 3/4" and then glue up a 25" x 25" panel. My jointer will only handle 6" wide boards so most of my panel glue ups consist of boards between 5" and 6" wide. Some big box stores sells wide panels already glued up for table tops that could also be used for this.

@DavidWestley I have had the same issue before and have created a lot of firewood in the past. This issue with UGS is that it keeps the whole job in memory and so at about 200,000 lines of code it bogs down to the point of in most cases it just. I used Aspire on this job and it created just for the V-Carve portion a little over 400,000 lines of code. Of course I didn’t realize this was an issue at first. I tried PicSender on this project and it handled the large file with no issues. This is the only job I’ve used the program on so I still have to learn all of its features.

@TravisLucia I think there is always a risk of there being issues but over time I have tired to figure out all the issues and do preventative maintenance on the machine to avoid some of those issues. Most of the time I will have the X-Carve running on one project in the shop while I’m working on another. With Easel and UGS you have the option to pause the job if you have to go do something or just need to take a break. With PicSender I haven’t found any pause option so I did take a few risks while I went for a run while it ran. I am using the Dewalt 611 with a Shop Vac as the dust collection and neither had any issues doing an 8 hour straight job (even I need breaks)

@DavidWestley - On large, complicated jobs like this, I will chuck a v-bit into the spindle and put a .2" hole at 0,0. THen, if something goes wrong, I can manually move the bit into this hole, nestle it in, and reset x,y zero. REMEMBERING to do this before you start a big job is the hard part. Also, this assumes you are starting 0,0 in a corner and not in the center. Unless you don’t mind a divot in the middle of your piece.

Also, I always screw my work down through the piece into the wasteboard to ensure it does not move until the project is over.

These two things save many of the catastrophic wastes of time during long jobs.

I will chuck a v-bit into the spindle and put a .2" hole at 0,0. THen, if something goes wrong, I can manually move the bit into this hole, nestle it in, and reset x,y zero.

@Earwigger I do the same type of thing now. When I attempted this carve however, I think it was perhaps the fourth or fifth job I’d ever done on my new toy. Copied the file from somewhere online, ran it through V Carve and sent it to the machine. What could possibly go wrong? This was also with the original 300w spindle that even then, needed to have the spindle started by hand before it would run. I think the spindle died forever a fews days later…

Still have that old bit of MDF in the scrap pile somewhere.

There just aren’t enough tonalli in the Xiuhpohualli to master these machines. Am I right?

awesome job. Love the natural mahogany too. This would look real cool in a corain made to look like rock (like the originals)…

That would look pretty cool! Has anyone tried carving in Corain?

This is a cool project, I have been interested in doing something similar to this. What size V-bit are you using for tight shallow cuts like this?

I am using a 60 degree .1181" V- Carve bit that I had purchased from Ebay for all the V-carving on the whole project.