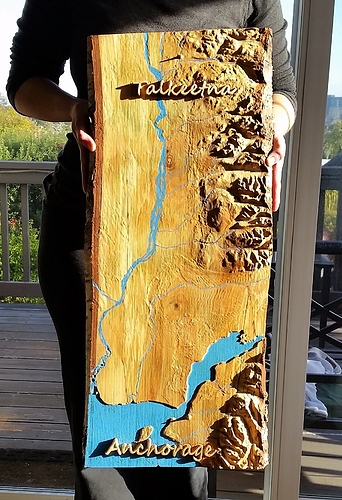 anch2talkeet_beauty1258×1836 730 KB
Christmas gift to my parents: It’s special to me since it shows my home town (Anchorage, I live in CA now), and where our family cabin is (North of Talkeetna). In addition, the birch it was cut on was felled on our family property, and my father then milled and planed it for me. Measures 30" long, over a foot wide. Previous to this I’d tested the wood in my ‘Clouds of Jupiter’ piece.

Overall 6 hour cut, then light sanding, stain, and hand-painted all the water. Hope to see it hanging on a wall up there next time I visit 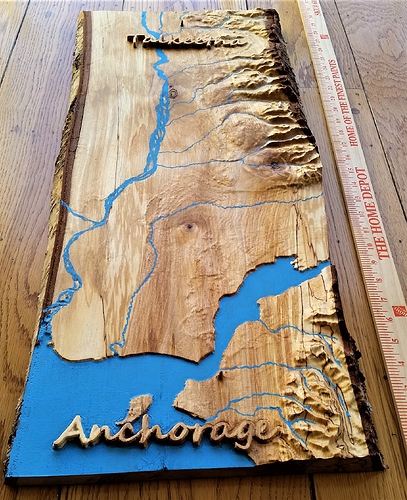 @RobertCanning : Thanks for the compliment. While it’s fun doing work for others, doing something for oneself, or someone you love can be really fulfilling.

I just have to ask… Did Big Lake get hit by a meteor? Looks like it might have wiped out 1/3 of the Valley.

A great job! By the way. I didn’t have much luck the first time I played with Terrain2STL, so I’m working on a map of St George Island in Inkscape from a map exported from Garmen’s Digital Topo.

I’d thought about adding in main lakes, but man, there are like one million lakes in that area. Once I started with one, I’d be up painting all night.
My family is mostly river people, so that’s where I put the effort

As far as Terrain2STL : It’s good for large spaces… like this cut, the SF Bay cut I did, and of the Denali range. It breaks down at closer range. St George Island… in Florida? Yah, I imagine Terrain2STL wouldn’t do much for that both based on the size of the area (relatively small), and basically flat. You could technically adjust the ‘water drop’ so that you could get a nice cut-out of it though.

Just for fun I captured St George in Terrain2STL: Yah, not so good. Too small, too flat. May be able to use it to cut a pocket, but the edges of the island are pretty rough at that scale. 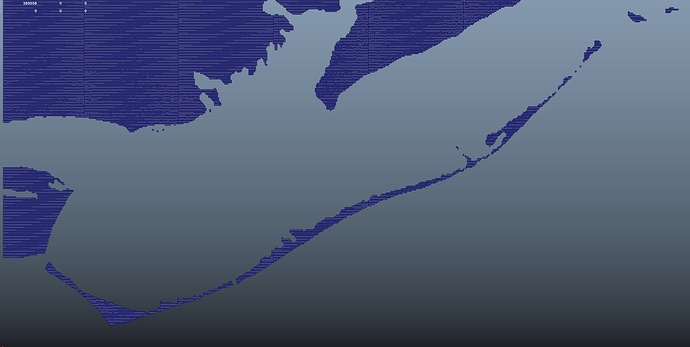 Pribolofs man. In the Bearing sea. I thought you said you were from Alaska!

This is where I’m at with it…

Beautiful! What’s the easiest “free” way to edit the files that come from terrain2STL?

@DamnitJim : I’ve been to a lot of places in AK, but not those island: They are out there

@PeterFroh : For dealing with raw mesh (stl data), the best free alternative is Blender, since it’s really designed for that. Steep learning curve, but it should do everything you want once learned.

@AK_Eric do you know what program works the best for resizing the .stl file, I am trying to just take a part of the file.

@ColeDeblieck : To do pure 3d mesh manipulation, I use Autodesk Maya, but that’s a bit overkill.
Free programs that can deal with mesh include Blender (full 3d app) and Meshmixer (mainly sculpting, but can edit/resize, etc). Windows 10 comes with ‘3d builder’ that will load them and do some manipulation, although I’ve not messed with it enough to tell you if it will do what you’re after.

I have had success with STL/OBJ => Meshmixer => Fusion360 => Carve
Meshmixer is used to reduce polygon count to 10k or less, otherwise Fusion360 struggle.

@AK_Eric I looked at 3d builder but I haven’t seen away I can just crop out a section of the map. I am trying to build something similar to what you did. The other issue I am going to have is how to add in the roads and names if that’s even possible. I will give meshmixer a try and see if that’s any easier to use. Thanks for the info.

@ColeDeblieck : What you’re describing would best be done in Blender: Steep learning curve, but can do all that. You’ll need to do face deletion or boolean operations to remove the part you don’t want, the create all new mesh to simulate the roads and text.
Technically Meshmixer can do that too, but it’s such a freeform tool, it could end up being more difficult.
Technically it could be done in F360 as well (adding text, roads, defining a custom area to mill with no poly deletion needed), but last I used it, and like @HaldorLonningdal said, it has some annoying poly limits that really truncate it’s mesh cutting capabilities.