A while ago I posted about a table I wanted to build using my x-carve. At the time I had produced a model to make sure I had my Fusion 360 project set up properly. That original thread is here.

Since then I’ve gone and cut out the full-size table. It went well, there were no big issues.

The only places where it could have gone wrong were in moving the work from the first position to the second position when cutting pieces that were larger than what the x-carve could fit. Those were the table top and the long frame sides.

The way I handled this was to get the machine to drill some tool-sized holes at the far end of the work piece. Then use those holes as reference when re-positioning the material. There were two holes, one at the back-left and one at the back-right.

Then I moved the tool back to the first hole and homed the machine there.

In Fusion 360 I set the first hole as the origin for the second cut.

I took photos throughout and thought you may enjoy seeing them.

Here is what the model looked like being cut 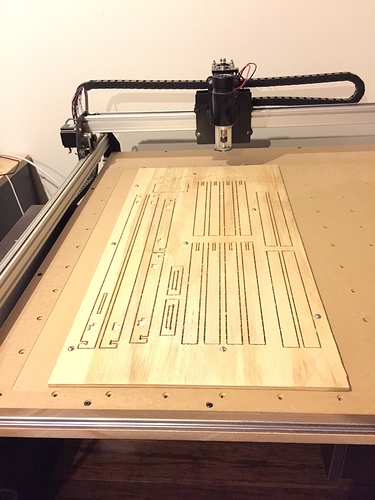 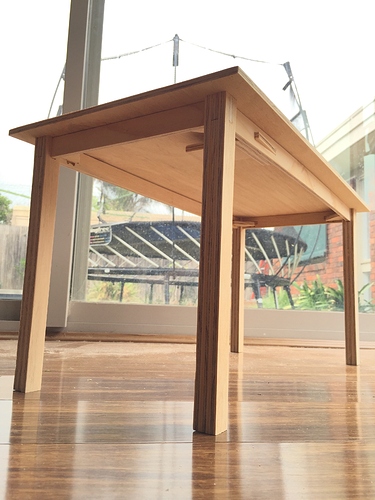 Cutting the short sides to the frame: 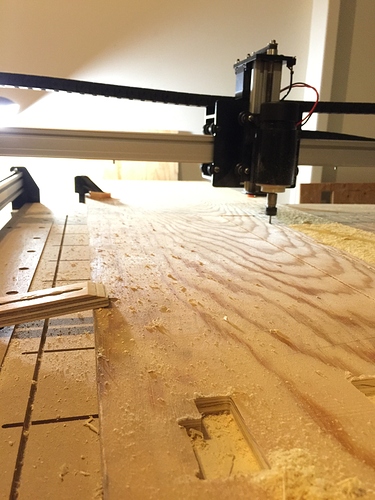 Here you can see how the cut was stopped at the limits of the machine, you can see the reference holes on either side of the work being cut. 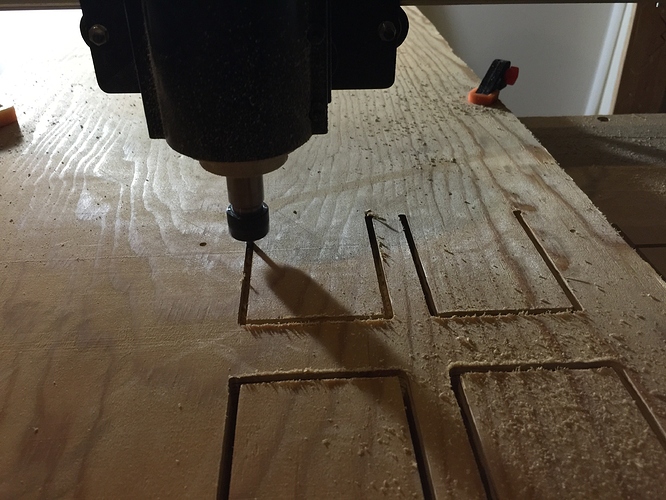 The result of all the cutting! 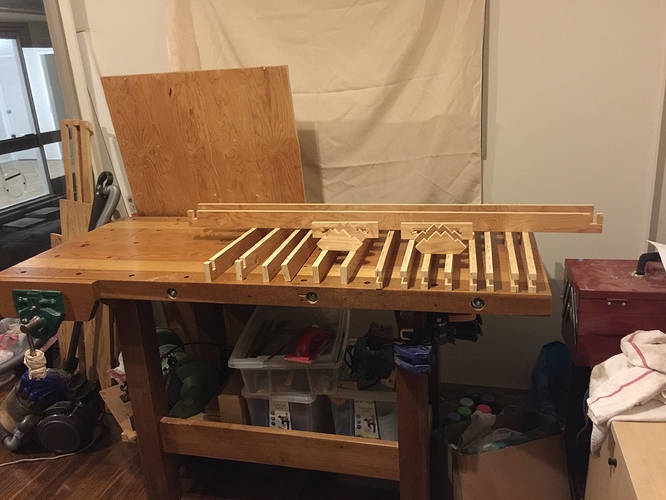 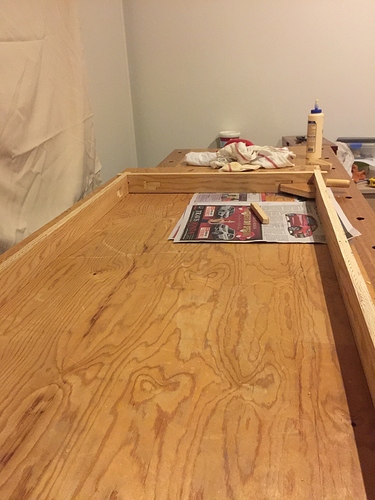 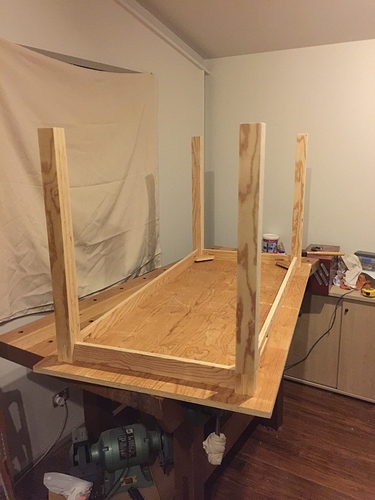 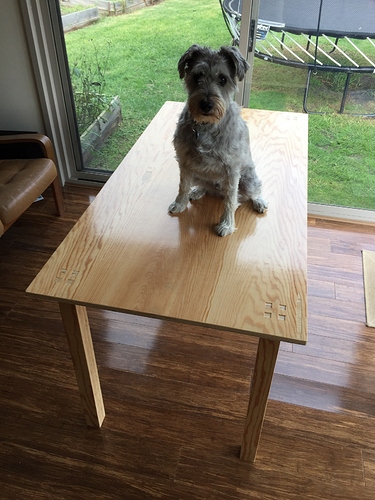 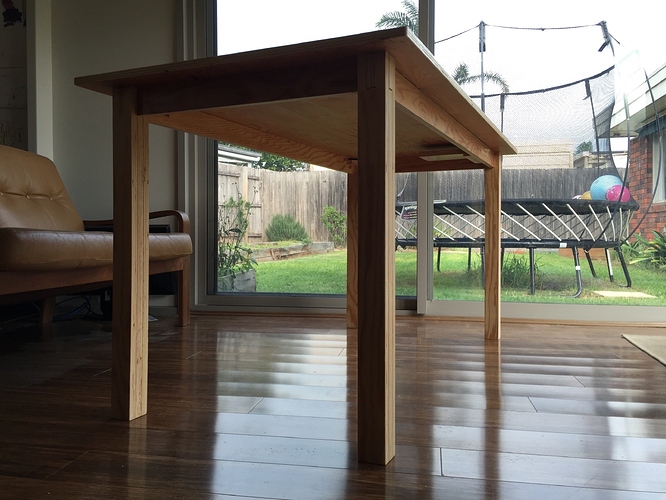 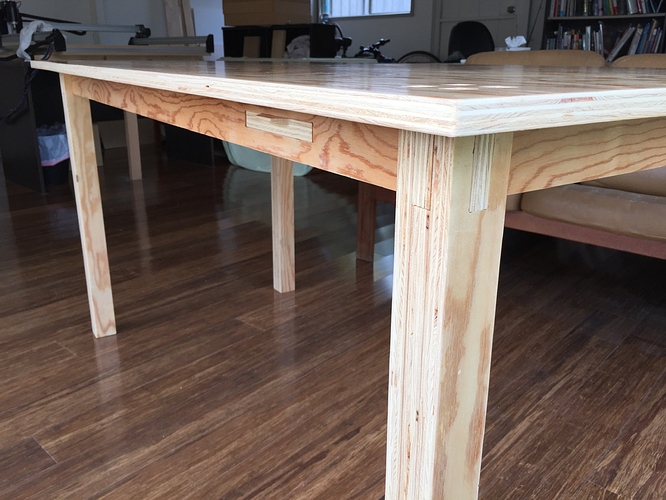 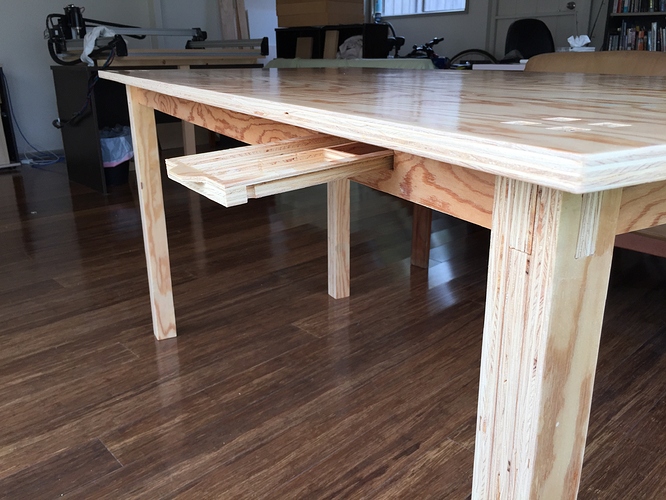 I used REALLY low quality ply wood for this project, the cheap looking wood you see on the face is not actually what the plywood is mostly made of. It’s a really thin veneer that was badly glued on.

You can see that it often separated from the main sheet while cutting. It’s really noticeable on the table top.

I used a water based varnish to finish the table and when applying it to the top it got under the thin veneer and lifted it so I had to cut a big square out of it. You can see that to the left of the dog, and another big missing chunk of veneer on the near right corner in the same photo.

I would love to have had the foresight to buy some nice birch plywood for this project ahead of time! I didn’t expect the process to work the first time around though.

I used too shiny a varnish too. It’s water based and it didn’t look quite so glossy in the samples at the hardware place!

Anyway, it’s not too important, this table is going to be used to hold the x-carve for a while anyway I expect it to get plenty damaged over the next few months.

Very nice! I really wanted to see a photo of that model table sitting on top of the full size one.

Thank you! the model table was destroyed during strength testing.

Thankfully I was wearing jeans so I was ok.

I’ll take some photos of the tray tomorrow morning. Are you interested in details of the ‘rails’ of the tray?

You’ve asked to see the absolutely WORST looking part of the whole build!

I set it to cut super-quick and didn’t check the tool paths too closely so you can see that in the main compartment the tool started from outside of the pocket at every depth, in a different place every time.

Cutting both sides of the tray took around an hour in machine time I think, so you can see that I had the feed rate and DOC up high.

I didn’t go with any of the original layouts for the tray, instead I quickly made up a generic one. I’m not sure if I will be using the tray a lot. The table is going to be used in the shed, to hold up the x-carve at least initially so the tray is too small to hold any reasonable amount of relevant tools.

I can see that you’ve got the drawings for the table too, are you looking at building one too? 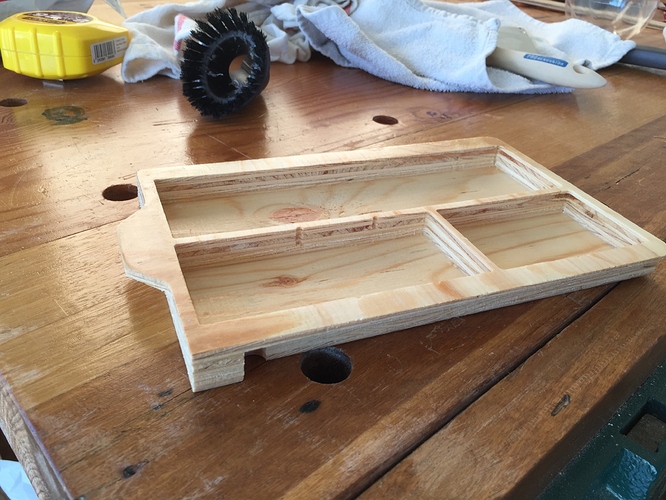 Thank you Zach, that means a lot coming from you! 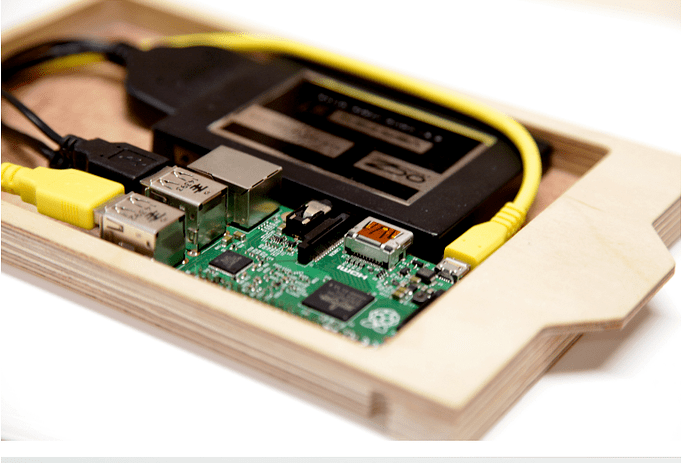 i like the idea that could be used to place the electronics in that tray.

tray from the bottom view

i want to see the tray from the bottom view 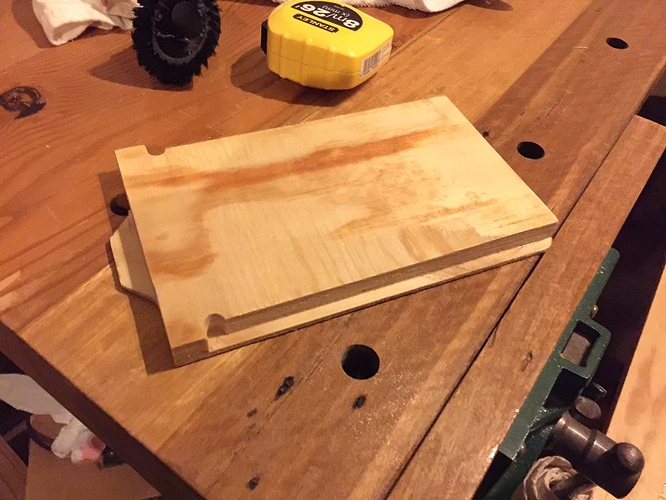 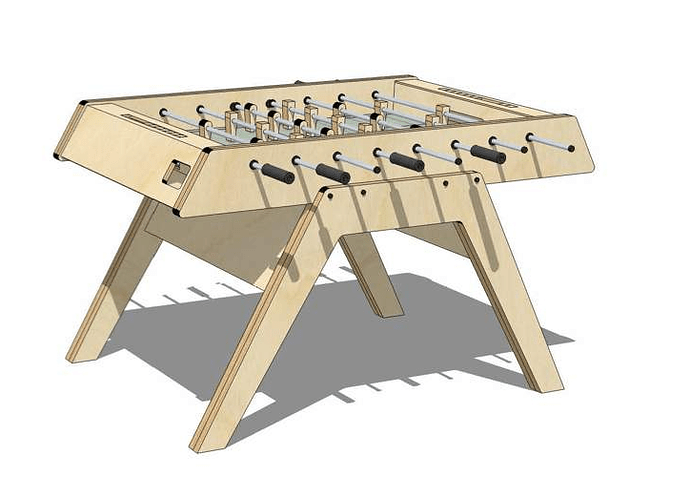 Thanks! Where did those files come from?