Part of trade show set up

Here is the beginning of a complete trade show display I will be making. These are the letters I carved and painted… I have a ton more to do and will post more as I go. Its going to take us a good portion of feb. to get this completed as we work on other projects. 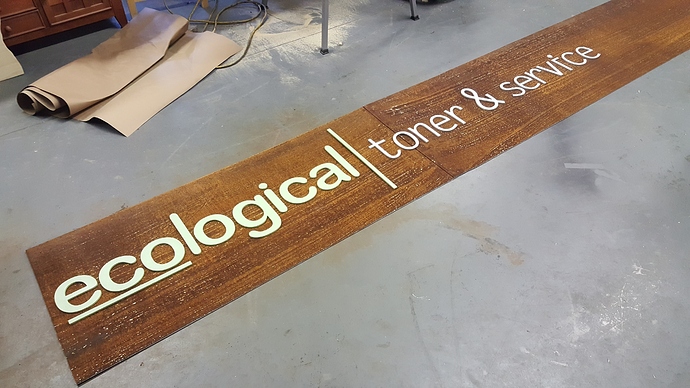 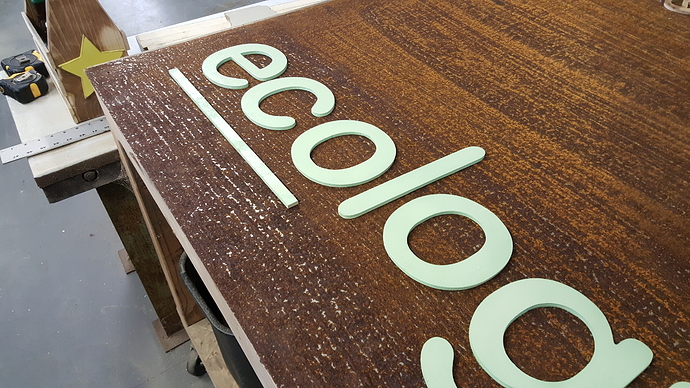 And the coolest part is that the X-Carve probably just about paid for itself by you making it instead of paying a sign maker!

another photo update… Got a bit behind. Took my index finger tip off with the table saw. 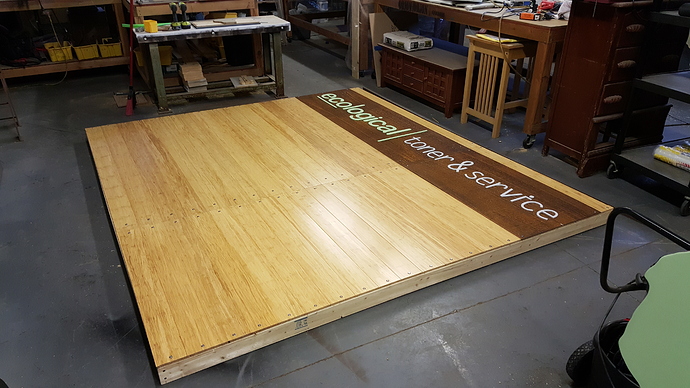 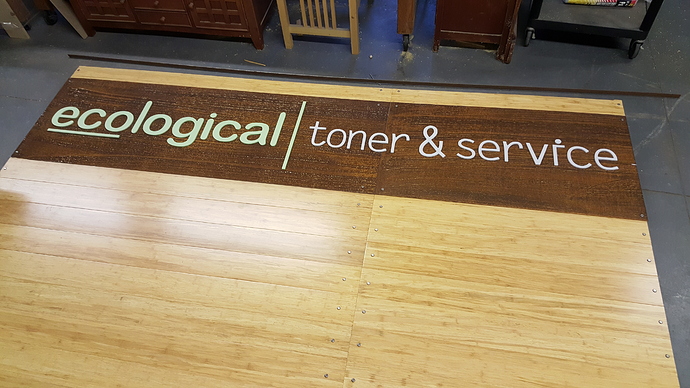 looks like flooring for the lighter wood areas - that’s clever. hope your finger is healing well.

Nice sign! You may want to buy a new table saw next

At about 4 min into this next video the inventor actually pushes his finger in the spinning saw blade. He certainly trusts his invention.

He had better trust his invention enough to personally test it. If the Inventor did not trust his machine with his own finger, then I certainly would not trust it with mine either. And if we did not trust the safety mechanism, then what good is this expensive saw other than a traditional table saw.

I don’t own one, but would like to someday have it as a second saw in my shop for most primary cuttings.

Currently I use multiple “special” blades in my saw that are not compatible with a Stop Saw. So even if I purchase a SawStop, I will still need a second tablesaw. This is the main reason why I have not upgraded to a SawStop tablesaw. Justifying the price of the machine and still needing a second saw is hard to swallow. But then again what is a finger worth?

IMO, The SawStop is a worthy invention and its safety features need to be streamlined into future tablesaws, but this is still no excuse for Proper Table Saw Safety. I truely wonder how many “table saw accidents” are Tool Faults and not Human Fault (I bet nearly 100% of accidents are operator error). The tool is just doing its job, spinning a blade and we want to make it liable for our actions. It is up to the operator to use common sense and safety precautions to keep all of their digits in tact by keeping them away from a blade that is meant to cut much denser materials. In my opinion, the saw is not to blame, the User is. But in today’s society, no one ever wants to take the blame or responsibility for their OWN actions. Most people make a mistake and they want to pass the buck and blame someone else when they were the ones being careless. It’s just like someone walking out into a busy street and expecting the brakes on a car to keep them safe. And if the driver fails to stop, the pedestrian wants to blame the car driving 45mph needing hundreds of feet to stop for hitting them. They don’t want to take responsibility and realize that they are only walking at maybe 2mph taking inches to stop. Our society needs to learn a little common sense and how to pay attention. If society did this then there would be less need of “safety devices” such as the SawStop.

Yes accidents do happen, but most could/can be avoided just by paying attention and using proper safety/operating techniques.

Now if I walked into my shop and my table saw fired itself up and walked over to me and just decided to cut my finger off bc it wanted to, then I could blame the saw. But that won’t happen unless Johnny 5 becomes my next table saw.

Don’t get me wrong, I think the safety features are a good addition, but let’s stop passing the buck and put the blame where it belongs, on the operator.

They make chisel guards, if I make a mistake and stab a chisel into my hand without the guard on the blade, is it the chisels fault? The manufacturers fault? Or the Users Fault???

I see a lot more risk with a tool such as the Xcarve than I do with a tablesaw. The cutter on the tablesaw is stationary (with factory safety shields that are usually removed by the operator), where as the cutter on the Xcarve is mobile within its footprint. If society continues on the same way with cncs as it has with the table saw, then using the same concept a user could reach under the gantry getting cut by the spindle or cut their finger/s off trying to manually hold down a workpiece. Is this accident the Machines fault? Absolutely Not!!! But following the same criteria as the tablesaw situation not only could the Spindle be responsible but the manufacturer as well. This could open up a can of worms for a business such as INVENTABLES.

Would any of this be the fault of a company such as INVENTABLES? Absolutely not in my opinion, but the legal system might see it differently such as it did with the table saw. Their excuse could be, well the manufafturer should have installed a sensor on the machine that would shut it down if some Dumb@$$ sticks a body part into the work area. Or the manufacturers should have sold it with an enclosure with door switches that disable the machine. By following the guidelines that the table saw lawsuits have been based on, nearly every tool and every manufacturer, would fail avoiding liability, making the manufacturers liable for the incompetent actions of its customers.

My point is safety features are nice but It is our responsibility to operate tools in a safe and responsible manner. If we do not know how to operate them safely, then we have no reason to be using it without proper training. If we get hurt, we need to know what WE did to hurt Ourselves using the power tool. most likely the tool did nothing wrong, it excelled at its job, the fault was most likely user error, so don’t blame the tool or the group who made the tool. Place the blame where it belongs, on the Careless operator.

Ok, I will get off my soap box now. Lol.

I just have issues with irresponsible individuals trying to pass the buck. It hurts us all in one way or another. Society needs to learn to own its own actions and take responsibility for them.

Michael, you are sure passionate about this! I think that is the longest post I have read on this forum.

I also agree with you, it is always the responsibility of the operator to use any type of machinery responsibly. But I am all for any safety features the manufacturer want to include for those instances where I have been trimming 20 pieces of moulding to size and my mind wanders for a quarter second while my thumb slides up on top of the final piece.

Safety precautions and systems are always a Great idea for those times that accidents do happen.

A tool is just a tool. We should now how to use it and what safety devices it has implemented. We should never rely solely on the “safety devices” to keep us secure. It is OUR OWN responsibility to keep ourselves out of harms way.

To blame a manufacturer for a problem that was a user error is ridiculous in my opinion. Especially if the machine already had safety features that had been removed by the user and/or the tool is used improperly. It’s not the manufactures fault. If I owned a SawStop and shut off the brake and used the tool improperly resulting in the loss of a finger is it still the manufacturers fault???

How long have table saws been on the market? Just now this is an issue bc one additional safety device has been invented, why was this not an issue 50 years ago.
I feel as if it is a society issue in general. If a machine malfunctions bc the manufacturer built it wrong or poorly then that is one thing.

A tool is a tool. It has no soul and can not do anything more than its intended function. If the tool is misused or abused, then the user is to blame, not the manufacturer or the tool. I might as well get in my car and drive down the street backwards at highway speeds. Then WHEN I do have an accident, sue the car manufacturers bc they allowed the car to go in reverse. I know this is a little different situation but it’s not the Tools fault or the person making the tool. The fault should fall on the individual who misuses the tool. If the manufacturer of tool was at fault, then practically everyone who touched it would get hurt, this isn’t the case.

Sorry for hijacking the thread.

A safety device is just another device that could fail.

Tim, its some left over bamboo flooring I had from a real estate flip. The finished product should look awesome.

Thanks guys for mucking up my thread with unsolicited advice on a safe saw and other ramblings.

Don’t blame us. You’re the one that cut off part of a finger. Sorry I probably should not of said that.

there is always one…

Thanks guys for mucking up my thread with unsolicited advice on a safe saw and other ramblings.

I like the colors that you have chosen. What process did you use to paint the letters?

Michael I used the finishing sprayer on my Wagner Flexio 590.

Did you use a primer first?

How much sanding did your finish take?

What type of paint did you use?

Sorry for the questions, I just like how your finished products turned out