???
Phil, I never type it in. I just point to it in the window that opens by clicking the button besides the file name box. Sure is easier for these old eyes.

I did not realize it was usable from a Dos window.

Jan,
There might be another Grbl user there in Columbus that could help you. If so, I hope maybe one will read this post and volunteer.

I must have a different version. It starts with an “A”… it’s all in a dos prompt and is very easy. I thought I got it from LarryM.

I posted an alternate method for firmware updates that doesn’t use Xloader. I think that Is what Phil is using.

Update 12/29/2015 It appears that this doesn't work on Windows 10. I don't have Windows 10 so I can't try it, but another forum member tried it and it didn't work for him. Updated 12/12/2015 Revised method for uploading a .hex file to the Arduino. This is an alternate method for uploading if you have difficulties with Xloader. This version prompts for the COM port and filename. **** Readme file 12/12/2015 **** To use this .zip file to load a hex file into your Arduino you first need to…

Robert,
I have not.
What is that issue?

Robert,
thank you, I will try to look into that.
is there a way to test this cable?
I just looked at the website, their only $4.50
Maybe Ill just get one and swap it out anyway.

I have been searching for Larry’s 1.0C spindle/laser firmware and am confused as there are a couple different 1.0c downloads and do not know which one to use. Could someone post the link.

If what you said earlier is true, and you got your Xcontroller last fall, you probably fall outside the potential suspect USB cable issue window.

I was about to type in an expanded explanation of how PicsSender manages the grbl parameters, and thought that it might be some benefit beyond the thread I was in at the moment, so I decided to place the response here and link to it from the other thread.

Here is the startup window, after I have homed my machine: 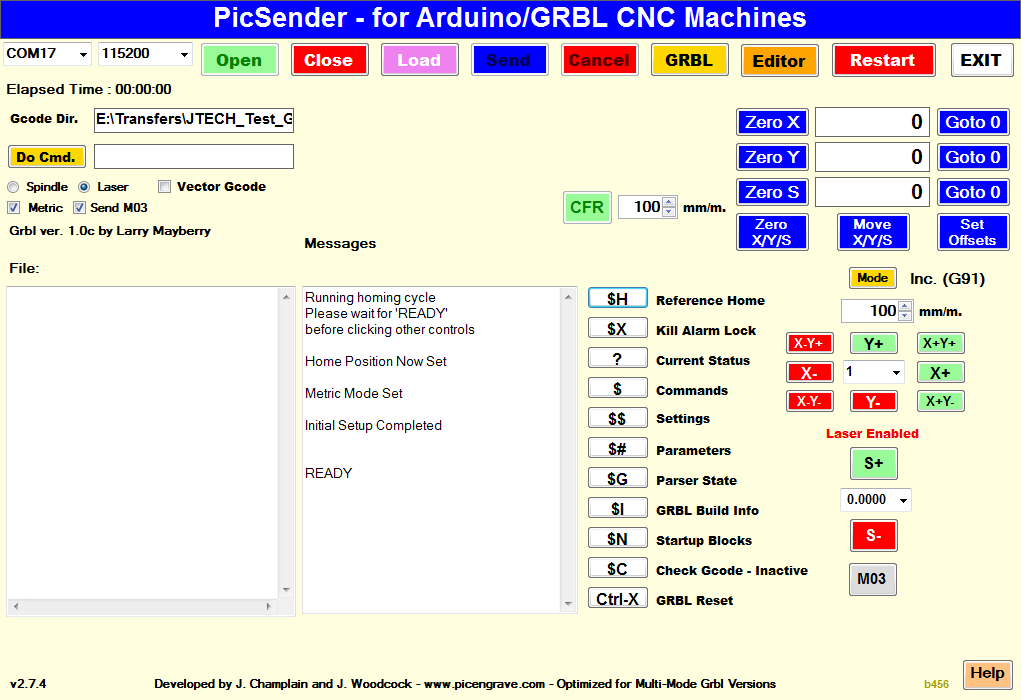 To move to the window that manages the grbl parameters press the gold “GRBL” button at the top right of the current window. That brings up the following window: 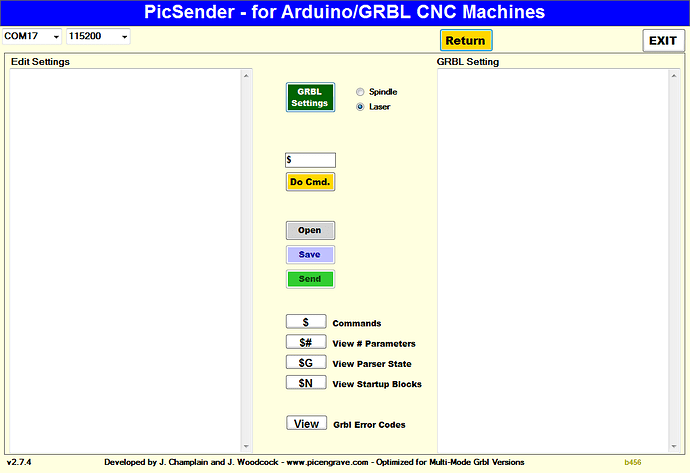 Notice that at the top middle of this window there is a selection for spindle or laser. At this time the selected device is “Laser”. This version of PicSender supports two multi-mode versions of grbl, my 1.0c version and the official 1.1f version.

PicSender works with two files on your disk drive that contain the settings to be used with the current PicSender session. They are “Laser.txt” and “Spindle.txt”. These are the default files that PicSender uses. You may also specify a different file to store/retrieve the settings from by using the “Save” and “Open” buttons (middle of the screen).

For grbl parameters that are the same for laser and spindle, you must set the parameter that you want to change in both files in order for the change to take effect for both the spindle and laser parameter sets.

There is a third location that stores the grbl parameters and that is in the Arduino/X-controller hardware. This is the version of the parameters that grbl works with to execute your G-code. It is the user’s responsibility to make sure that the correct parameter set is loaded into grbl before running a job on the machine.

However, once set up properly, PicSender will help you by placing the appropriate parameters set into grbl (based on the selection of “Laser” or "Spindle) when you start a PicSender session and when you change the device selection by pressing the “Spindle” or “Laser” button.

In order to display and/or change one or more grbl parameters, you press the green “GRBL Settings” button at the top center of the window. The display will change to something like this: 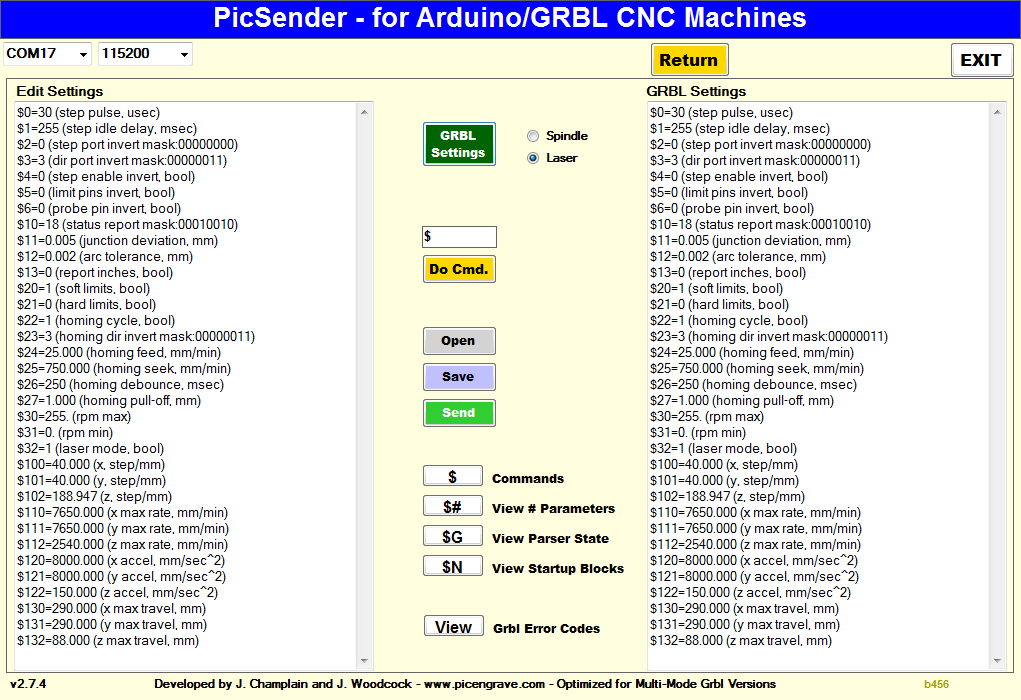 The panel on the right now contains the grbl parameters as they are in the Arduino/X-controller hardware and the left panel is the “edit” panel where you can change one or more settings to new values.

Make the changes that you want to make in the left panel and when you have them all done you will press the light green “Send” button to update the parameters in grbl (Arduino/X-controller hardware).

If you want to make the changes “persistent” you also press the violet “Save” button to save the new parameters in the Spindle.txt or Laser.txt files (you can also save to a different file name if you don’t want to change the default files, but you would need to use the “Open” button to retrieve those settings as PicSender loads either Spindle.txt or Laser.txt into grbl [Arduino/X-controller] when the program starts).

Remember, if you change a grbl parameter that affects both spindle and laser you must save a new default file for both the spindle device (Spindle.txt) and the laser device (Laser.txt) if you want the change to be persistent for both devices.

Press the gold “Return” button to return to the main screen.

It sounds very complicated, but once you have your machine tuned and the parameter files setup properly, it’s merely a quick one button press to change between spindle and laser.

Thanks go to Jeff and John for all their hard work to make this easy for the user.

Thank you very much Larry for adding these PicSender instructions.

would it be difficult to add tool tips for the “Save” and “Send” buttons like you have on the “Open” button?

The tool tips are already there, but the Save & Send buttons are not selectable until the grbl settings are displayed in the Edit Savings panel. Select the GRBL Settings button and the tool tips will then display when you hover the mouse cursor over them.

Sorry, but I’m only allowed to give this just the 1 Like.

And thank you very much for this Larry. Having someone besides me explain things in different words is a big help. I get hung up viewing something like this from the inside looking out, instead of like a user outside looking in.

hi I used picsender v2.2.4 for aloge time ,now i format my pc so i wnt to install this program but when i go to picsender website there is another version ,when i install it i can not register , the icon do not work
i purchase this program and i have registered code

You need to connect to the com port before the registration button will be active to select it.

Bring up PicSender 2.7.4 using my 1.0c grbl (haven’t tested this with any other version).

It will vary the speed with S values when running a gcode file, even if the Pause/Resume is used. It remembers what the last S value was in the gcode file when Resuming.

You can switch to Laser Mode and set a PWM value for the S+ & S- jog buttons to speed up or down the Spindle speed also. The S+/- jog buttons sends a M03 Sxx, so there is no need to execute a M03 in the Do Cmd, It uses the set S jogging value when selecting the M03 button after the S+ button sets that value and the M05 button will turn it back off again.

Steps to fix USB Ports not Working in Windows 10