Has anyone tried molding plaster of paris, gypsum powder into a block and cnc it? If it works it could be a very cost effective way to make very detailed 3d carvings because of how fine the powder is. Just a thought I had, but never tried. I think I have some in the garage, I’m going to give it a try this week.

I found this on Video on Youtube that looks promising

Yes I was thinking of it for architectural pieces, I use high density foam now and this would be much cheaper even if only for testing purposes at first. I have a small vibrating table that should do the trick. If I remember correctly the bubbles form on the shallow part of the back, so if I make it thick I should be ok. I have some free time tuesday, I think I’ll try a small 10x10 molding and see how it goes.

I have used a palm sander to remove bubbles. Works well.

You know there are 3d printers that print in plaster? Picking up a used one of those might be interesting if you’re doing this commercially. Your local maker spaces may even have one you can try; http://wiki.metrixcreatespace.com/3d-printers here in Seattle does.

[quote=“JamesMoore, post:6, topic:33729”]
You know there are 3d printers that print in plaster? Picking up a used one of those might be interesting if you’re doing this commercially. Your local maker spaces may even have one you can try;
[/quote]Yes you are correct. I use a lot of 3d printers, the issue with the printers you’re speaking of is the expense of creating the part and the limited bed size. This should be a fun experiment, I just need to make sure my dust collector is up to the task as i’m sure there will be tons of dust and that stuff can be very corrosive if there is moisture in the air. I’ve read adding white glue into the mixture aids with dust control. I’ll do a write up or video if it works so other can try.

All you have to do is get some dry wall.
It has gypsum power in it.
Just use one of those bits that is used to cut it.

unfortunately the gypsum mixture in drywall is not dense enough to 3d carve, it will cut fine though. I’m going to start at about 1in deep and make it nice and dense.

First test is getting underway, this is a 1" thick 8x8 block being cast of plaster of paris. I used a vibration table to bring as many bubbles as possible to the surface. When it drys i will I will surface off the imperfections and see how it mills. I’ll keep the thread updated if you guys are interested in this little project. I hope to be able to do 24x24 panels if all goes well. 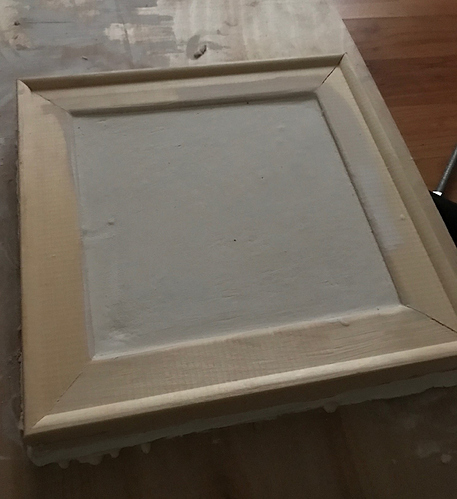 I saw someone on YouTube use it to make a form… https://www.youtube.com/watch?v=YqDD6nKZ1n8

While it wouldn’t be my first choice for molding aluminum (kinda dangerous with the water content of the plaster) It looks like it machines awesome! I’m looking forward to trying it out

Well the finished block looks great, it’s about 7.5 x 7.5 x 1.25, no major air holes, looks nice, dense and solid. But at this thickness it looks like it’s going to take some time to truly cure, I probably should’ve went thinner to start, but you have to start somewhere. So as I pick out a cool design for my test on this, I’ll wait for it to dry, not that I would have much time to do anything as we are expecting a blizzard in New York City tomorrow. Looks like I’ll be spending my time fiddling with the snowblower instead of the X-carve 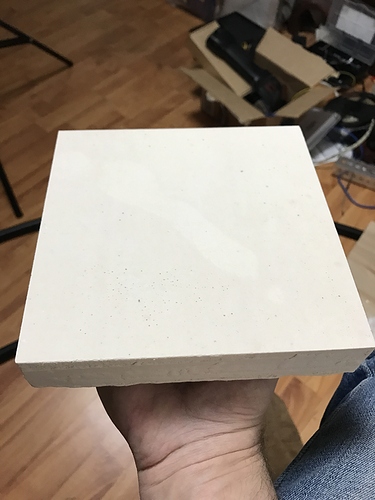 Ok, decision made for the plaster block design. Here’s the video of the simulation.

Well the plaster block is in the machine running at the moment. A lot less dusty than I thought it would b,e seems to be running well except it only did one layer of the roughing path like I had shown above in the simulation and then went straight into a finishing path which is fine since it’s a soft material, but I can’t figure out why it didn’t finish the roughing path. the tool paths were done in aspire and combined and I’ve never had the problem before. I’m running the program through easel as I always do. anyway here is the video of it going and I’ll post the finished product hopefully looking well when it’s done

Well plaster mills great on the X-carve! The detail is beautiful, very minimal mess when using a dust shoe (Less than wood actually) I darkened the finished product with some water so the detail would come out in the photo. I love using new materials, I can see many uses for plaster in the future. Next I want to try Micarta (anyone try it yet?). What other materials would be cool? @Zach_Kaplan ready to do some architectural design improvements to the Inventables headquarters? 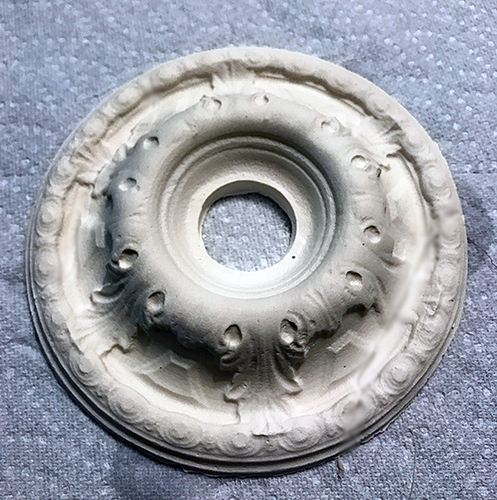 Back in ye old days, I did a lot of molding/casting with hydrocal and ultracal. We used an additive called Acryl 60 to harden and increase the detail. I would think it would work with plaster as well.

How solid is plaster of Paris? I’ve never worked with it, will this thing just crumble or does it have some backbone?

While it is solid, it is fragel on thinner areas and easily breakable like a piece of pottery. It can be strengthened by using strands of fiber mixed in when making it. It really depends what you will be using the end product for. The nice thing about the product is it shows great detail, is ridiculously cheap (a 25lb bag of powder is less than $20) and mills very nicely and needs no roughing stage (which drastically speeds up milling jobs).