Power Control and Distribution Box for the X-Carve 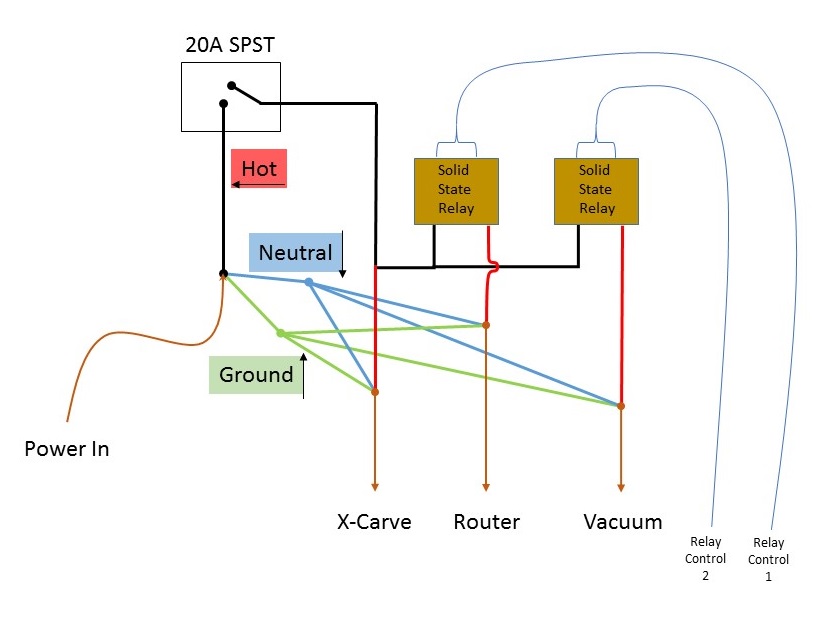 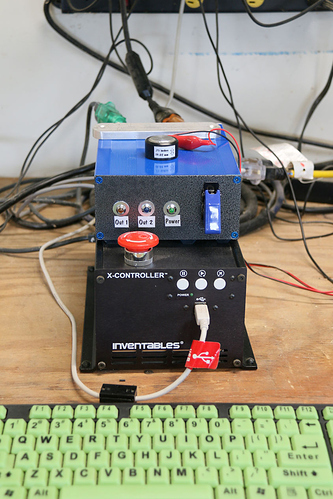 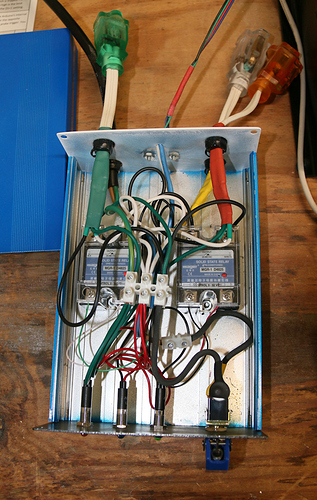 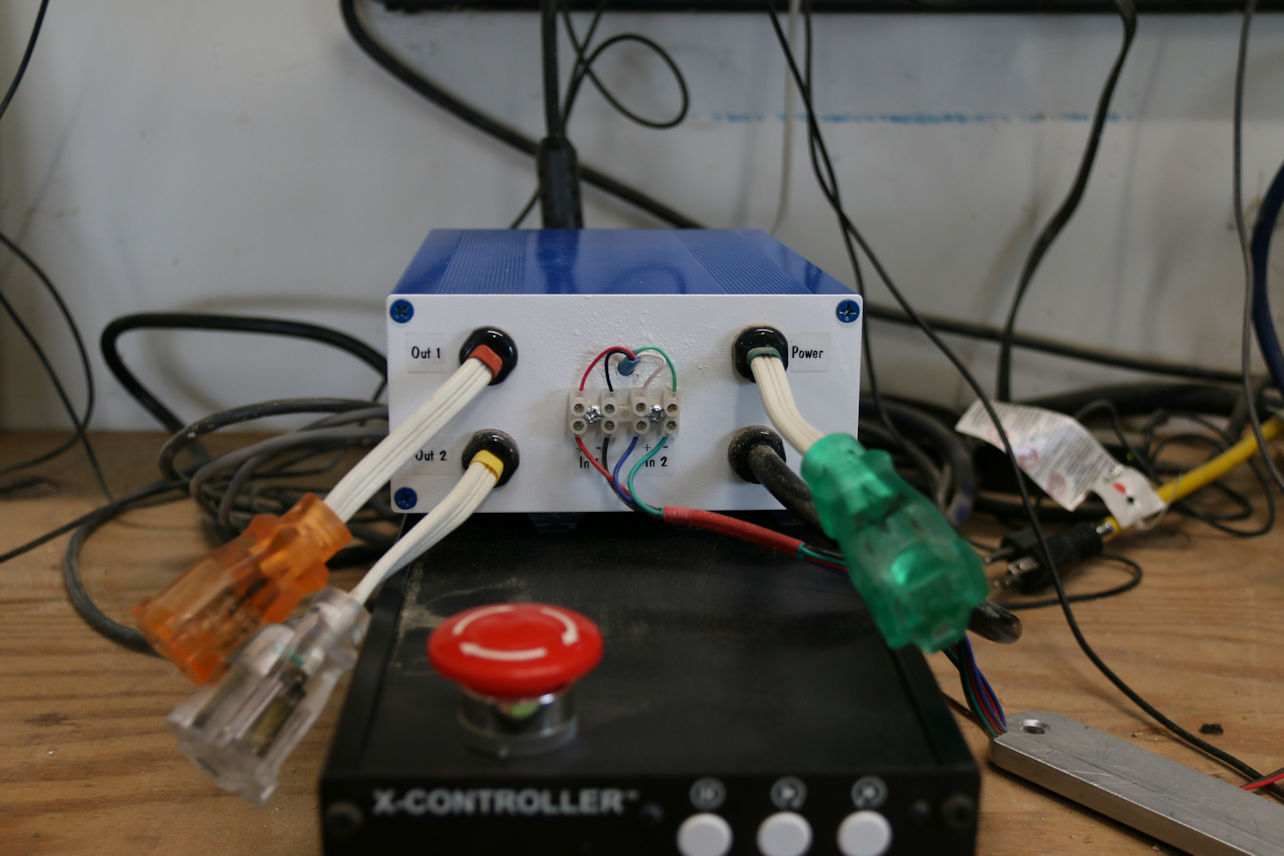 Because of the small size of the box I had to get creative with the outputs. I used the Coleman Cable 6991 Power Strip Liberator, cut off the input and used solder & heat shrink to add extra wire length. 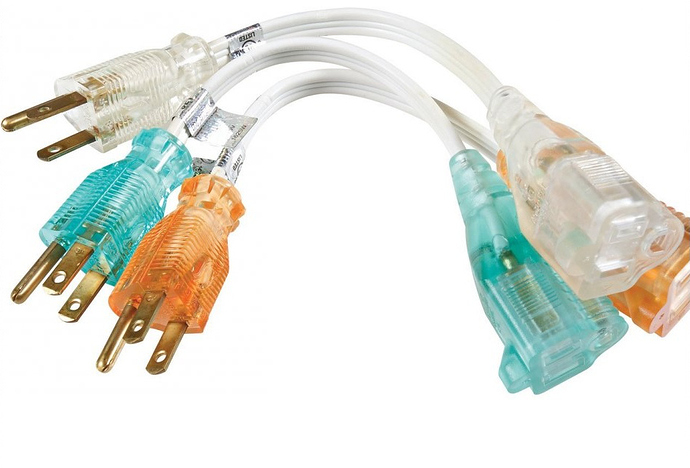 I used the box for several months just powering the X-Controller and the router. Everything worked great, that is, until I hooked up the vacuum system. (BTW: The vacuum system from Inventables is GREAT!)

The original power switch I installed, even though rated for 15 amps, let me know, in spectacular fashion, that it was not happy with the extra load. 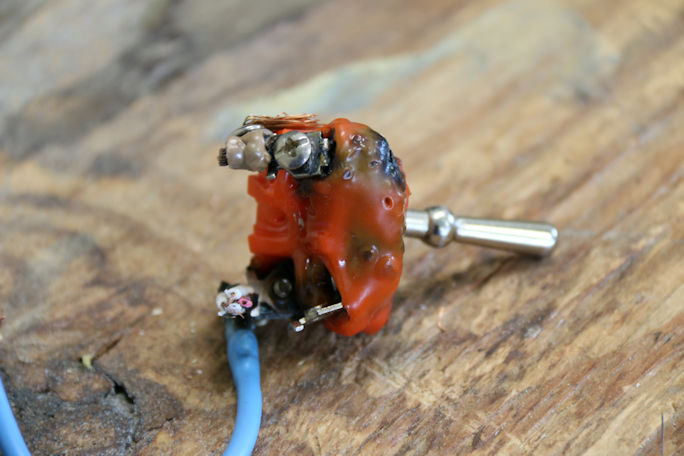 Doing the math, the Dewalt draws 7 amps, the vacuum is 5.5 amps and not sure exactly what the draw on the X-Carve is. Anyway, I now have a 20 amp switch installed and haven’t had any more problems.

Phil - That would work but it defeats the purpose of a single point of control. I flip one switch and ALL power is shut down. If it becomes a problem I will just rewire so the main output is on the switch and the SSRs use the low voltage control only.

Doing the math, the Dewalt draws 7 amps, the vacuum is 5.5 amps and not sure exactly what the draw on the X-Carve is.

24V 400W power supply. Quick math says max draw is 16.67A. The default Xcarve though, at idle with torque reduction enabled, is about 3A, assuming a constant draw of 0.7A on each motor.

If you’ve got vac, router, and Xcarve on the same circuit, I could see a way you might trip the breaker if you’re really pushing the machine. A 20A breaker will help but it’s still possible.

Right, but that’s on the DC side. Current draw on the AC side is about 6.5 amps. So, you’re right, I’m still running pretty close to max on the new switch. I’ve been using it for about a week now with no noticeable problems. However, should I get any overheating problems again I will just rewire the box so that only the X-Carve is on the switch and the router & vacuum are controlled by the low voltage and the SSR.

@Rikster I love your idea, you have put some time into it. I’m curious though as why you choose to switch the hi side AC load load vs the low side D.C. Load but whatever works works right. I don’t know your background and I don’t want to assume but do you know motors are incredibly noisy so it’s not a good idea to run your controller/ spindle/ D.C. on the same 110vac circuit. Hell when I used a 611 I didn’t even have it on the same phase as my controller. Did I say I loved the design yet? I have a question, I’ve read the inventables D.C. Hose is a anti static hose, is there a lead at the vacuum end to connect to a ground wire?

While my math was off, my statement about breaker and such does actually line up. That’s what I get for doing math too early in the morning.

The Max 16.7A DC would be more like 3.64A on the AC side, ignoring inefficiencies of power supplies and such. Under no load with idle current reduction enabled, you’ll only see about 0.75A.

But, you’ll never see an idle condition with router and vac on so it’s unrealistic.

The same applies for your breaker. On a 15A breaker, you’ll probably trip it with everything on it. You would be 80% loaded on a 20A circuit.

Now I understand why the Idle Current Reduction is enabled by default on the Xcontrollers (other than to try to control the temp of the steppers).

I beleive that @Rikster is just trying to have one switch to turn off the power to every A/C device (Vac, Router, and Xcontroller). I don’t think the point of it is for an E-stop, he has the E-stop on the Xcontroller. It’s a light switch for the Xcarve! It just kills power to all devices.

Also, the DC voltage is contained in the Xcontroller so it’d have to be brought out and then back in and then it’d be redundant with the built-in Xcontroller Estop.

True, you can do that. But that entails additional components, cost, complexity and requires additional space (that I don’t have) to implement. The bottom line is; will the benefit derived outweigh the hassle needed to implement. In my case, I don’t think so.

your breaker, not your switch

True, but I took that as a misstatement on his part. Up until then we had been talking about switches and not breakers.

Also, If I had a giant dust sucker it would be on its own circuit too. I’m using a small shop vac to do the job (5.5 amps max draw).

I hear you about the noise factor. So far I haven’t had any problems. I think the power supply in the X-Carve has enough filtering capacity to handle the noise. The only times I have had problems with noise is when I used to switch the router on manually. Then switch bounce would kill the data stream sometimes.

Yes, the Inventables vacuum system comes with a static strap that you can connect just below the X-Carve table then connect the other end to a ground. It’s a nice system and I have been very happy with the ease of operation.

which exceeds the 15A capacity of your original

Yep. That’s what happened. It’s funny how those things add up. Anyhow, I haven’t had any problems with the circuit breaker or the new switch.

Cool, the only time I’ve ever had a noise problem and it wasn’t noise but an ESD was before I had a anti static D.C. Hose it touched the z Axis motor during a carve and sent the machine wildly off direction ruining the piece.