I have a piece of MDF. I stuck thin laminate on top of it which already comes with a sticky side. I’m not sure if it’s laminate or what but it has a woodgrain texture (and for the duration of this post, I will refer to it as laminate). Anyways, when I try to use a v-bit to carve through it and into the MDF, it leaves ugly tearout (I call it laminate fuzz ™) that is very difficult to clean up without accidentally removing the laminate. This problem is more obvious when I cut very shallow grooves. I’ve experimented with filling the entire surface with painter’s tape and engraving through that, and although it produces much better results, it’s hardly an ideal solution, and I was hoping someone might have done this already or there is a tried and true process for this that I’m not aware of, or if there’s a genius who just generally has great ideas.

I had taken a picture and forgot to attach it. Came running back to the computer hoping no one has read the message yet. Should have known better 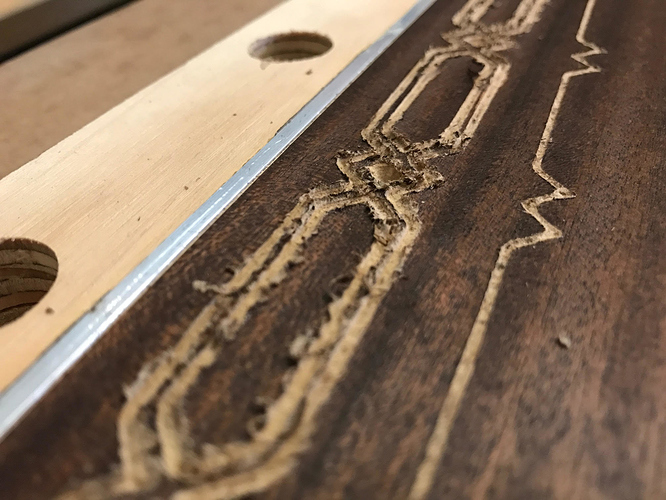 Oh, and by the way, this is literally a brand new CMT bit that I had JUST taken out of the package. I also tried Freud.

This is as deep as I want to go for this particular design though. If I went deeper, I’d get better results but there would still be tearout. The deeper I go the better the results. I don’t have problems cutting directly into wood. Comes out very smooth. But it’s only when sticking something on top of the wood.

Are you using a downcut spiral bit?

You mean down cut spiral. I think same three,

as the others have said, if it’s a straight bit you’ll want to use a down cut spiral. for a v-bit the options are more limited. Traditionally I’ll mask over the area to be cut with painters tape before I cut with anything other than a down cut bit on veneered materials. it won’t stop tearout but has reduced it quite a bit in my experience. I use the same technique when cross-grain cutting plywood on the table saw and it helps a ton, even with a zero clearance insert.

when I try to use a v-bit to carve

Not many options with a v-bit. If it’s suitable for your project I would follow the others advice and try a very small downcut bit

Thanks for all the advice. As stated in my first post I was using a v-bit. I’m afraid using anything else wouldn’t work for most of the stuff I do.

PhilJohnson, that is about 1-2mm deep, so I’m not sure dividing this already tiny depth into multiple passes would do anything. But to answer your question I’m using Fusion 360.

I think I’m drunk. I missed the meanings. I thought you both giving advice for down cut bit, you were guesing what kind bit he’s using.
Yea boy use downcut bit, no tear.

This is a new bit and this was my first carve with it. For the past year I’ve v-carved up to 0.375" (9.5mm) deep in one pass with no issues. I know it’s overdoing it and I don’t do it often (at least not on purpose) but with a new bit it cuts like butter. Actually now that I’ve converted 2mm to inches (0.079"), I know my cut wasn’t even that deep. The v-bit was barely touching the surface of the wood and I could barely hear it cutting.
You know, I get the same type of tearout if I were to tape just painter’s tape directly onto the wood. I’ve tried this in the past and it would do the exact same thing. So anything that you stick to wood would do this IF carved with a v-bit, and I think anyone using any machine would probably get the same result… Maybe there isn’t a way around it and maybe that’s why nobody does it, I don’t know

AlanDavis, I’m afraid I can’t replace a v-bit with a downcut for my applications.

With all due respect, PhilJohnson:

I have a suggestion that is not cheap

It is by Toolstoday or Amana and even tho it seems like a bit of money I am sorry to all that read this a $4 bit off amazon can not compete.

Definitely worth looking into! I was using a $32 3-flute 60 degree bit but I’m sure a bit that cuts through aluminum would kill it.
Thanks.

Have you tried carving just the laminate by itself? I know its not efficient but I’m thinking it might be worth a shot. I’m almost positive the result you are getting is due to the adhesive backing tearing out the mdf during the cut. If it doesn’t work with the laminate you have I think they still make a type with a dry adhesive that needs to be applied with heat for cabinets (Been 15 years since I built cabinets) that might work for you. If that isnt possible maybe try a solid wood under the laminate, just to see if it is indeed the mdf and adhesive combo causing the issue.

But I have to place the laminate onto something, right? Even if it’s the spoilboard (which is MDF). The laminate is about 1 mm thick and already comes with a sticky back (it has a brown film that has to be removed prior to sticking onto the wood). Do you mean cutting the laminate prior to removing this film?
But you’re right, I should try a different type of wood. Maybe it’s the laminate/glue/MDF combo causing the problem. Thank you!

And thanks for the input on the $1 bits, Phil. Are those from China?

Yes. I am wondering if you cut the laminate before sticking the adhesive to anything if it will make an improvement.

Well, if tape doesn’t help and it’s a new bit I’m kinda at a loss myself. I never get that amount of tearout with v-bits but I’ve never done an adhesive backed veneer. It sounds like you’re using a decent bit, too. I’m a big fan of my 30 degree single flute onsurd, but my 60 and 90 from other brands aren’t too bad either. I wonder if someone makes a shearing vbit, that would potentially help reduce tearout due to the angle of the carbide edge.

The only thing I could thing to try other than changing bits or speeds would be maybe experimenting with applying a film-forming finish like a polyurethane, varnish or tung oil and let it cure before cutting, the finish would fill the grain and maybe hold it in place better while cutting. The 2 downsides of this are that you may not want to put this type of finish on and that it can take quite some time for it to cure enough (the general fishes poly I like to use takes 21 days to fully cure, but could probably be machined after a day or two with thin coats)

I wasn’t pay attention before. Floor laminate MDF is a Worst MDF you can find. Looser than naked MDF.
You can prevent a little by going slower and raising RPM to 4.5. Or do one more pass with .01" deeper.
Best idea is never use floor laminated MDF base material for anything. I was failing like this at the beginning, because Home Depot having free samples I was trying to do fridge door signs ETC.
Solid wood Laminated floor material is good choice.

Ideas:
Run the carve twice. I know this works for cleaning up the "fuzzes’ on regular wood carves.

Maybe reduce the max depth of cut on the bit so it does it in a couple of passes. Shallower cuts might mean less tear out.