This is my first project share, but I know it’s poop. No need to deny it. 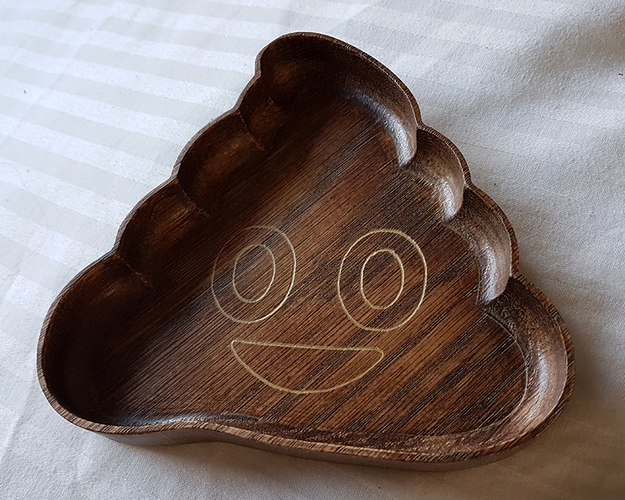 Oh, that’s a good idea! The dish is meant for a gift exchange of sorts, and I was initially planning to just give the empty dish. But then I started thinking it might be nice to fill it with some kind of wrapped treats. I’d want something that fits the theme and Kisses would be perfect!

It was that kind of year, I guess.

Great project! Came out really nice. I think the Hershey’s Kisses is a fantastic idea.

I have a pankcakebot and the poop emoji was the most asked for pancake at our local makerfaire!

Thanks, guys! I am happy with how it turned out, but I’m disappointed that I didn’t think of the Hershey’s Kisses myself so I could’ve had time to get them. But this goes out Monday, and I live in the UK where they are not the most popular (and really really expensive when you do find them!).

In other news, I started another project yesterday, and hope to be ready to share soon. I made a lot of progress for the first day, but it was a proof of concept. Now I need to make it for real. Can we edit topic titles? I am thinking my projects should all go in a single thread so I don’t fill up the forum with my nonsense, so I’d like a not-project-specific topic title.

Edit to clarify: The Hershey’s Kisses are expensive for what you get. They’re not like Fabergé egg expensive.

If you scroll to the top of this thread a pencil will be next to the title…just click the pencil to edit the topic.

Thanks! When I get around to posting another project, I’ll update the thread topic.

On Friday, I tried out an idea in the workshop. I am happy with how it came out. Now to make my own stamp image, rather than just grabbing an icon from the icon bank. 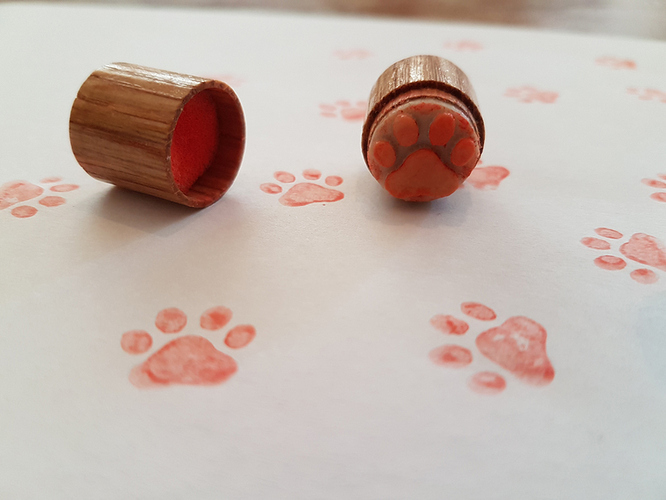 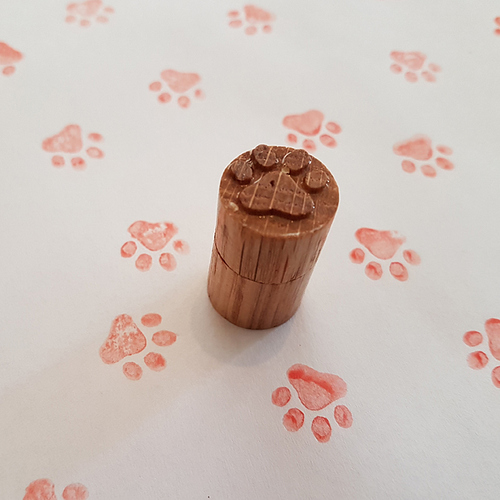 This carve was from mid-summer, when we were still figuring out the machine. The skull design is just one my husband found by Googling. The rest of the design is inspired by this: Coloring book page to reality?

The piece is just a decoration; it doesn’t do anything. But we like it. The base is a piece of firewood I sliced up and sanded to a smooth polish. . 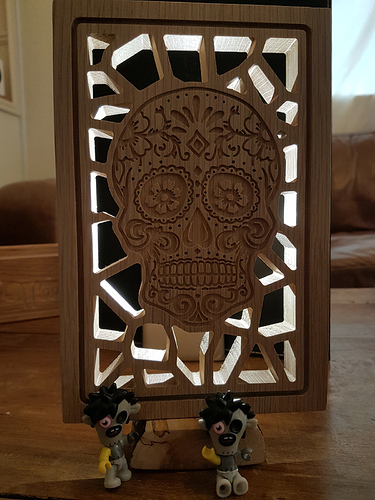 We later used the same image to decorate the top of the tortilla press we made.

Yesterday, I made custom covers for the ventilation holes that I need to cut at the base of my workbench to prevent damp from causing it to go saggy and moldy. They are awesome because Domo! 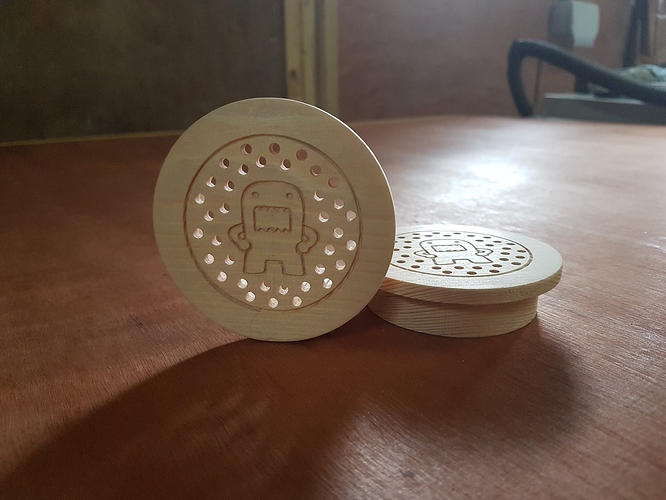 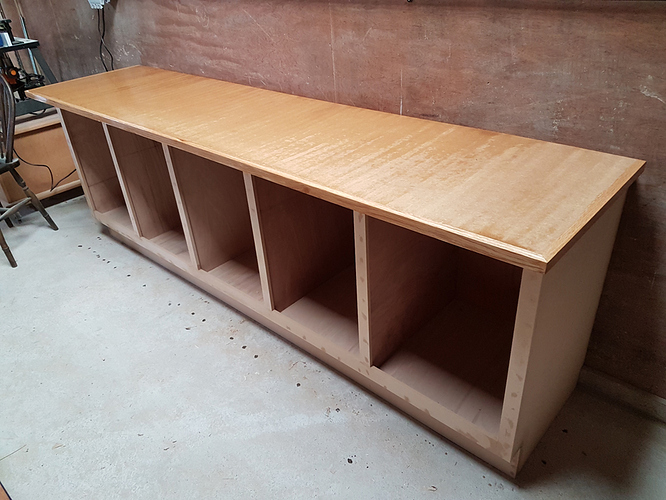 The plan is to use our Ø65mm hole cutter to cut holes at either end at the bottom, then insert the covers to allow some airflow in without letting mice or other small animals in to create a nest.

So I feel really dumb because I called it a bench, its too pretty to be a bench… I love this pc.

It’s been a long while since I shared a project, but I just referenced the blast gates I made in another thread, so I thought I’d show it from another angle, along with the power switch box for the dust extraction… 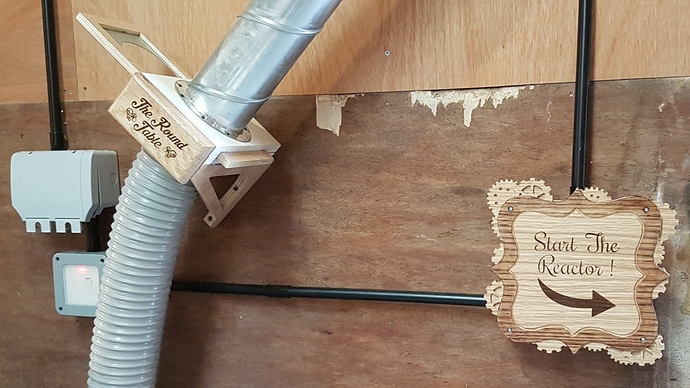 The blast gate is melamine boards with channels cut to accommodate the plywood frame that holds the aluminium sheet. The gates (there are three, so far, with two more coming in the future, as we set up additional tool stations) are fixed to the wall using plywood brackets. Everything except the sign on the front was designed in Sketchup, then cut on the XCarve. The sign is wenge inlaid in oak, and was designed in Aspire. 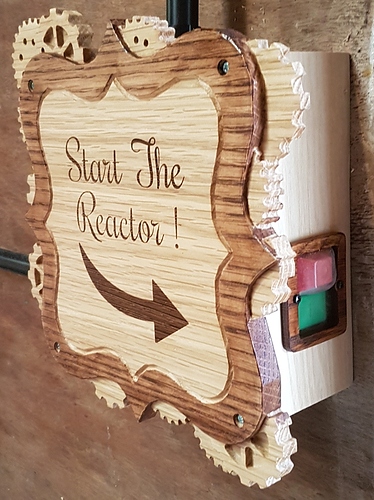 (Yes, we know the fonts don’t match on the blast gate and the power button box… we realized far too late to fix it, so we live with it.)

Love the blast gate and so creative on the power switch cover. So fun … and useful!

So, what actually happens when you push the button…

The dust extractor in a cupboard in the next room comes on. It’s quiet, though, being that far removed, so “start the reactor” kind of seems overly dramatic, now.