I am doing what I assume an easy cut to cut out a rectangle in a 16 by 5.5 inch square which is center and 3 by 14 inches. I am using Easel with x-controller and z probe, 1/8 up cut bit, colt router. I set the depth of material in Easel at .5 inches birch plywood. I used the probe to set the z position. I jog to set the zero and do not touch the z height, I leave it set based on probing calibration. But when I cut it moves the router down AND STARTS TO CUT FROM ZERO IN AND through the material - i.e it is cutting the red line — which I assume should not be cut, it cuts this path about 1/8 inch… I am sure I am just missing something very new user to Easel… Help

Have you specified the correct thickness of your Z-probe plate? (so Easel can compensate)
Your issue is locked to your zeroing work flow, question is wether it is work flow related or bad data.

You can check:
Do as you did, zero the Z.
Under Machine Inspector (CTRL+SHIFT+D) Z Work position should = the thickness of you touch plate.

I will reply to what I have observed and limited understanding - I have been using Easel for sometime and this was a strange event that this started to happen??? I just start to use the limit switch on my x-carve and been trying to start from a "standard zero position for X,Y,Z. So this was the new process I was doing… What I have determined is that when I home with the “limit” switch my Z axis is maybe 3 inches from the work surface. I am thinking that the GRBL code has some issue when zero probing the Z over a long travel distance over 2.5 inches, The incident is repeatable when Z home limit switch is used to probe to the surface of the brass z-probe. It looks like everything Zeroed but it repeats the cut in the red path in the wood to the start point and does not move the router bit up and out and over to the starting point. I also have with a second z probe a second time to verify (the probe from the Z limit position) it tries to drive the bit into the brass puck. Work around was to move the Z (down closer to the surface) by jogging the tip of the router bit with in a inch or so above the the brass probe plate, and probe from this distance never failed to zero. Never saw the problem I did a number of carves and did not have a problem. But I can repeat the problem when setting my limit switch setting… Also a fyi my Z older based on prior shapoko, first generation x carve using the acme thread… but should have the same travel distance as others but place of my limit switch and ACME thread length maybe different? I am not sure…

A number of post people talk about the machine setup walkthrough - I have to say I am at a loss to understand what people are talking about other than setting the machine in the initial setup the 1000m, the acme screw, (see attached photo) this is all I have done. I was early adopter of shapeko, to x carve gen 1, then to the current version with x-carve with x-controller… I am wondering what is this machine setup process is there a webpages or something that “walks” a person throught this? I could have missed something as I have built the machine a number of times… so I could have missed a vital step and not aware? Also when they switch to the new version of GRBL with x-controller with zeroing and probe in the software all I did was update to the current X-controller. I never have set any probe thickness or any other thing… and I know when I brought the pages up for z-probe it has 2 decimal points the I did not enter the third decimal point. 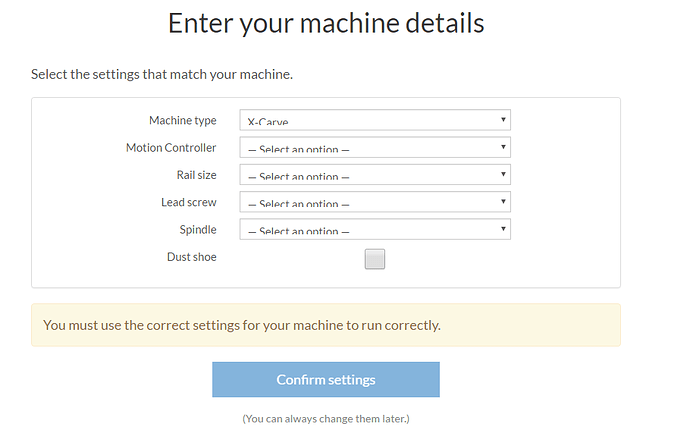 Keep going through the setup… you should come to this screen 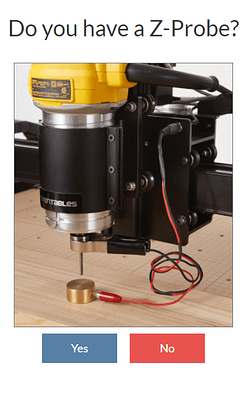 Before you click on yes, take a read through this… Z probe issues