Sharing a Lamp Build That I Just Completed

I believe that this is my first post here, and I hope that this is appropriate to the forum. I made a short video to highlight a recent lamp project, and thought that I’d share it with the group. I’m still pretty much a novice with woodworking, so be gentle! 1000mm X-Carve did the work (obviously), 1/8" endmill for everything here. I took inspiration from something I found online, and modified it to suit me.

I’m enjoying the site and getting ideas!
–Ray

That turned out perfect! Thank you for sharing it. I downloaded those plans but have been putting off the build. I think you have inspired me to get started with it.

Quick question, do you know if any of the parts are over 12 inches in any dimension?

Also, you said you modified the plans, was that to fix a problem with the plans or just to make it the way you wanted.

thats sweet and awesome video how do i get plans to build something like that?

Thanks guys! I had a blast doing it.
This was largely derived from this project, which he made out of plywood, I think:

I re-did the base and the “jaws” around the bulb, because I wanted something more “robot-ish”. I used the dxf files to generate vectors (SVGs) in Illustrator, and used CAD to draw up some modified jaws. I think there’s nothing wrong with the original designs.

Well done both on the project and the video. Short, concise, to the point. I like it!

That’s one hell of a first project/post! This is definitely the right forum for stuff like that. Wish we had more cool stuff like this to keep me inspired.

This may be a cool opportunity to create a tutorial on how to do from a CAD drawing to a finished project. The cool thing is that CAD is free. I’ve been using DraftSight. It also has an easier learning curve than Sketchup in my opinion. Sometimes there are cash prizes for doing cool stuff like this…

Actually, one of the things I’ve really enjoyed about this hobby is working out the software chain to get from different kinds of designs to a quality output on the machine. (And also to stay within a family guy’s budget…I can’t go around buying $2000 CAD packages, etc…)

I also recently discovered DraftSight…it’s the answer to my prayers. I worked as a machine design engineer for years, and the AutoCAD keyboard shortcuts are ingrained…DS understands those out of the box, and that’s just beautiful. To remake the jaws, and the yoke that holds them, I used DraftSight and exported to DXF.

I brought the DXF’s into Adobe Illustrator CC, and saved them out as SVGs. You have to make sure that all polylines are joined. (Another tip is if you’re working with an image as a source in Illustrator…you have to “Expand” it, so that vectors are actually created, or Easel with reject it) Easel accepted those SVGs with no issues.

For the other parts, I came across these DXF’s (attached), which someone generated from those files on the project page. They’re supposed to be organized by thickness…one of the files is for 1/4" parts, the other for 1/2". There is one error that I found there, the 2 parts that stick out of the base are supposed to be 1/4".

I brought these DXFs into Illustrator, isolated the part I needed, made sure it was all joined up, and saved as SVG. Easel had no trouble. All of this was on Mac versions of software, not that I think it would make much difference.

I failed to answer an earlier question, btw…yes, the longer pieces in this assembly are over 12". FHQCXSKHCJO5GXY.dxf (1.3 MB)
FOMH0G5HCJO5GY0.dxf (1.7 MB)

Give Fusion 360 a try. It is a professional level CAD/CAM/Analysis package from Autodesk and it is free for individuals (to get us hooked).

The number of settings for the tool paths are intimating, but it is well worth the effort to learn them all. You’ll get faster job times and better surface finish.

Yeah, I kept hearing about Fusion 360, and it sounds great, but all I ever see when I go to the site is mention of “free trial”, meaning sooner or later I’ll have to start paying. Not really what I’m looking for. Is there a special place to go to get the individual free option?

Same download. If I remember correctly you can tell them somewhere in the registration process that you are a hobbyist which gives you free use for a year.

Awesome, thanks guys!
If someone wants them, here are the SVGs for my yoke and claws. (Zipped, I was having a problem uploading straight SVG’s, for some reason.)
You make one of the claws with the circle, so it can attach to the lamp assembly, and 2 of the plain claws. I did have to do some sanding to get it all to fit together.

And here are the lamp socket and LED bulb that I decided to use. (The yoke is sized to be able to “squeeze-fit” the socket in.) I like this bulb because it’s got a reflector built-in, and puts out extremely little heat.

This E26 base light bulb socket to 2-prong US AC power cord allows you to install a light bulb with an E26 base (the most common size in the US) wherever an electrical power outlet is located. 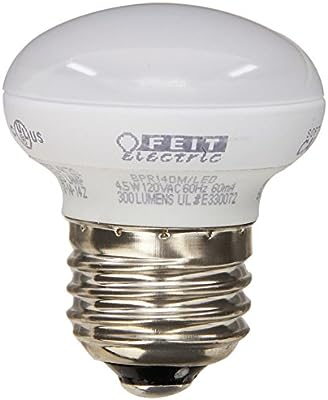 Lamp looks great! I would love to make one, can you share the easel project or the .svg of the other parts? The .dxf above are not working for me. Thanks!

I’ll see if I can find a moment to share those parts over the next couple of days. I have to put down personal projects to travel to California for work, this week.

great lamp. whats the technique to get that tight clamping on the part, but making sure your cut (or router) will miss all of them???

Not sure I understand the question…how did I keep the router from missing the wooden clamps while carving? I just set my origin carefully, and measure before beginning to place my clamps out of range of the toolpaths. Or am I misunderstanding?

This wasn’t my very first project with the X-Carve…I’ve been making stuff for a few months. But I think I still have a lot to learn about woodworking and CNC. Seems like each new piece teaches me something!

That turned out great! Will have to build one for the office. Added to my bucket list.

Thanks for sharing @RayNeel! No good deed goes unpunished…