Hi all, Carvey is great and I’m working on fixing a bug between ChiliPeppr and the Carvey. I see when connected to Carvey that it’s running “gCarvin 1.1.5”, rather than a common Grbl version.

Is this code available somewhere? I assumed it was just running Grbl v0.9 but not so sure anymore.

Ah sweet, thanks to this article, found the code here.

Okay, still confused. Where does the “gCarvin” text come from? I don’t see the word “Carvin” anywhere in the https://github.com/inventables/grbl source, yet see “gCarvin 1.1.5” when connecting to the serial port of Carvey.

I believe that Inventables hasn’t published the branch they build the Carvey image from.

git log --all -SgCarvin doesn’t produce any results in the github.com/inventables/grbl.git repo.

This is a little strange, because the inventables fork of grbl (at least for the X-carve, and so I assume for the Carvey) is from the post-v0.9 series, which is GPLv3.

I asked and was sent the link to https://github.com/inventables/gCarvin/

I tried to upload through Arduino IDE but got timed out on every attempt during the upload stage. Has anyone successfully uploaded to Carvey? Thanks 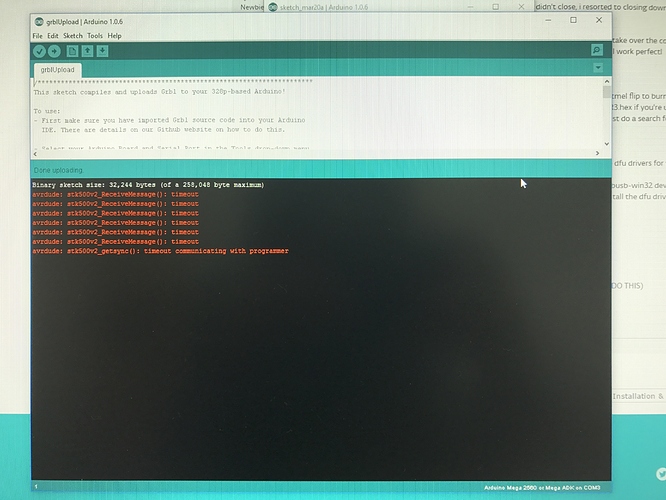 Really? How could they know? Also, do the beta features in Easel void your warranty? Honestly, I trust the paths out of Fusion 360 more than Easel.

Really? How could they know?

Here is a quote from the Carvey FAQ

Carvey is only approved for use with Easel, though you can use Easel to send g-code toolpaths generated by outside programs. At the moment, we support the following programs for generating gcode compatible with Carvey:
•AutoDesk Fusion 360
•MeshCAM
•Vectric V-Carve, Aspire, and Cut2D

Where does the “gCarvin” text come from?

There is a post showing the slowest with default firmware is 45mm per minute but I need a cut with 20mm per minute. That’s why I want to recompile gCarvin with ADAPTIVE_MULTI_AXIS_STEP_SMOOTHING turned off.
https://discuss.inventables.com/t/feedrate-meaning-and-grbl-stops/17026/2

Check to make sure that you have the correct board type selected in the IDE under the tools menu. In your IDE output picture the number of bytes maximum is greater than the 328P has.

Also, the version of the IDE you are using is pretty old.

I selected Board type as Ardunio Mega 2560 as told in the gCarvin github.
https://github.com/inventables/gCarvin

The IDE is mean to be old, read that 1.6.10 and above doesn’t work with their boards as the file compiled is too large for the board. Why 1.0.6 though it’s the last classic version and actually I picked it up from an example video from inventables, although it’s for Uno not Mega.
https://www.youtube.com/watch?v=nozWMg_87H0

The “file to large for board” is an UNO issue. Notice in your upload attempt the image file size is 32,244 bytes and the maximum size for the 2560 is 258,048. You could load multiple copies in that much space.