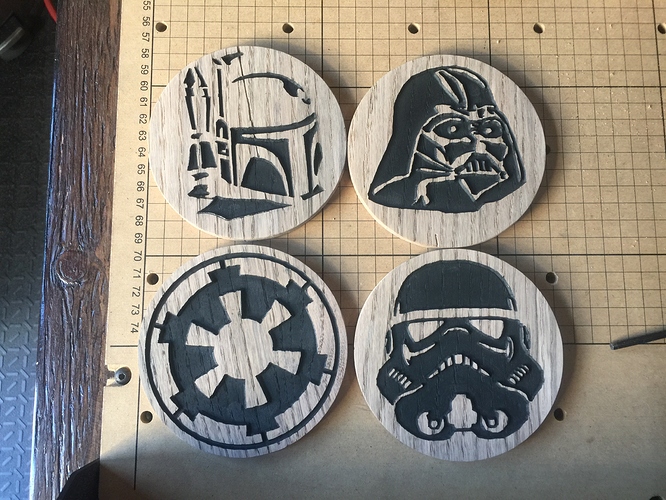 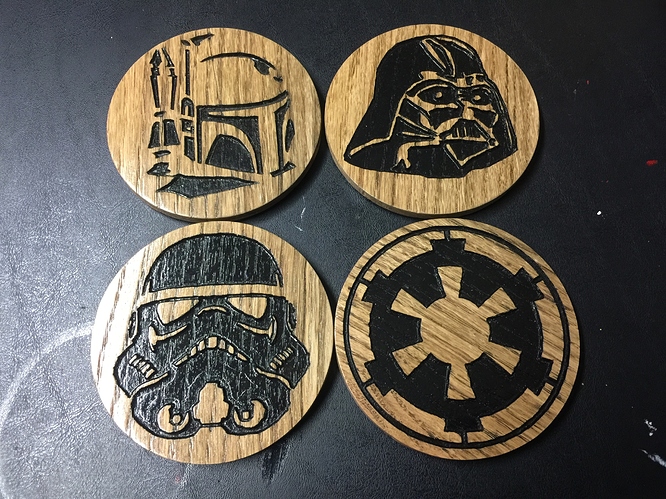 The force is with you! What material are you carving that is dark under the wood grain, or had you already panted the cut areas in the first picture?

Would you be willing to share the project files?

sorry not for this. i sell these for 30.00 a set there is cork on the back to that cut out with the cnc and glue on

You have a license to sell these?

Go to Etsy.com and search Star Wars, Ask them for there license.

I get that you sell them, but anyone on here is unlikely to be buying them. And considering that you’re taking Star Wars images, it doesn’t matter if you share them or not. Others can find the images elsewhere if anyone actually wants to make them. Careful though, just because people on Etsy are doing it, doesn’t make it legal…

I find it funny that your using stencils/designs from Stencil Revolution and their site explicitly states that their files are not for commercial use.

I’m glad this forum is much more “aware” of this than the average.

Almost every woodworking/maker group I’m on over on Facebook, people are posting their craft fair booth pics, and almost every one of them is ripping off Star Wars, NFL, and about a dozen other unlicensed trademarks.

I find it funny that your statement is complete wrong. It is paid vector images for a site

I stay far away from anything that could be considered copyright.

OK, well you say they are but you posted no link to the site. Here is a link to stencil revolution http://www.stencilrevolution.com/star-wars-stencils/

and they are an exact match to what your using. But hey, its your dime. I don’t even have an xcarve yet but came here for ideas and saw your project and thought it was cool. But considering that I’ve been here all of 1 day, I realize what “open community” means. maybe if you did you wouldn’t get so many negative comments on otherwise nice work.

Those images can easily be found on google, or other places, so it doesn’t matter where they were found. But as said here on many other topics and forums, you can’t legally just take whatever images you want and sell them. Many do it, but that doesn’t make it legal. But people are gonna do what they want. Just be aware of what can happen.

Tom p just pretty much summed up what I was going to say. Thanks they are nice work and under the laws I found it runs under open source images aka found on google or other public domain and is considered fan art yes it may look similar to another image but to do “change it” to make it work for me making it also fall under a custom item

It’s funny that the guy person carving star wars villains is the one who won’t share the design because it might cut into their profit margins on etsy. “… beware. Anger, fear, aggression. The dark side are they.” But seriously, go to google and type in star wars .svg and you’ll find whatever you want; there’s 40 years of vinyl sticker designs to choose from that work great for carving on a cnc (including rebel alliance designs).

Yes you can find similar images on Google. I just won’t share my work file. These are made width aspire and require a bit change. And I run this on ugs. Bits are a .0625 for all the flat surfaces then I used a 60 v bit to add a contours and all the small detail like the sharp edges. I also have a touch plate set up, with that I can do infinite bit changes with very precise cuts from one to the next.

A word on copyright from someone who has run several print shops, copy shops, and who has gone to court to defend the trademarks of organizations, and who deals with stolen photography all the time:

If you didn’t draw that image, (and even if you did, if that image is of something that you didn’t create) you can’t sell it legally.

To apply it to this situation:
You’re selling images you didn’t draw, of characters you didn’t create, from a franchise you have nothing to do with and making money from it. It’s the EXACT thing copyright and trademark law was created to prevent.

Also keep in mind whose trademarks you’re violating. Lucasfilm is a BIG company, and they’re now owned by Disney, a MUCH bigger company. Disney is infamous for lobbying to keep its early works out of the public domain by having copyright law changed and rights extended.

I worked for a company that got into trouble with copyright issues. The fine would have been $250,000 per day per use. The company proved to the copyright owner’s satisfaction that it had no knowledge of and did not participate in the offense. The offense was the result of one employee doing something he should not have done. Copyright owner was satisfied with withdrawal of the offensive material and firing of the offending employee.