I love my car audio but my truck don’t. I have to have the seat all the way back and my other box I made for 2 12 inch subs would not allow it and have the air space required. So I purchased a 8 inch competition grade subwoofer to replace the other 2. The whole box was designed in fusion and turned into svg and cut with easel. The construction is of many many rings stacked glued and brad nailed. There are different sections front plate for the sub mounting mid section rings to form the cavity then rear section cavity rings witch when stacked form the inner cavity and port tube then the rear port plate. The cavity design and port design are to the manufacturer specks on volume needed for optimal operation. MDF is cnc router butter so cuts were made with a 2 flute .125 upcut bit @.25doc @100ipm. Had a little assembly line with a 10-12 minute turn around. 4 pieces being cut while 4 were being prepped and assembled. This little sub and box out performs my other setup. just need to finish up with some wire management. 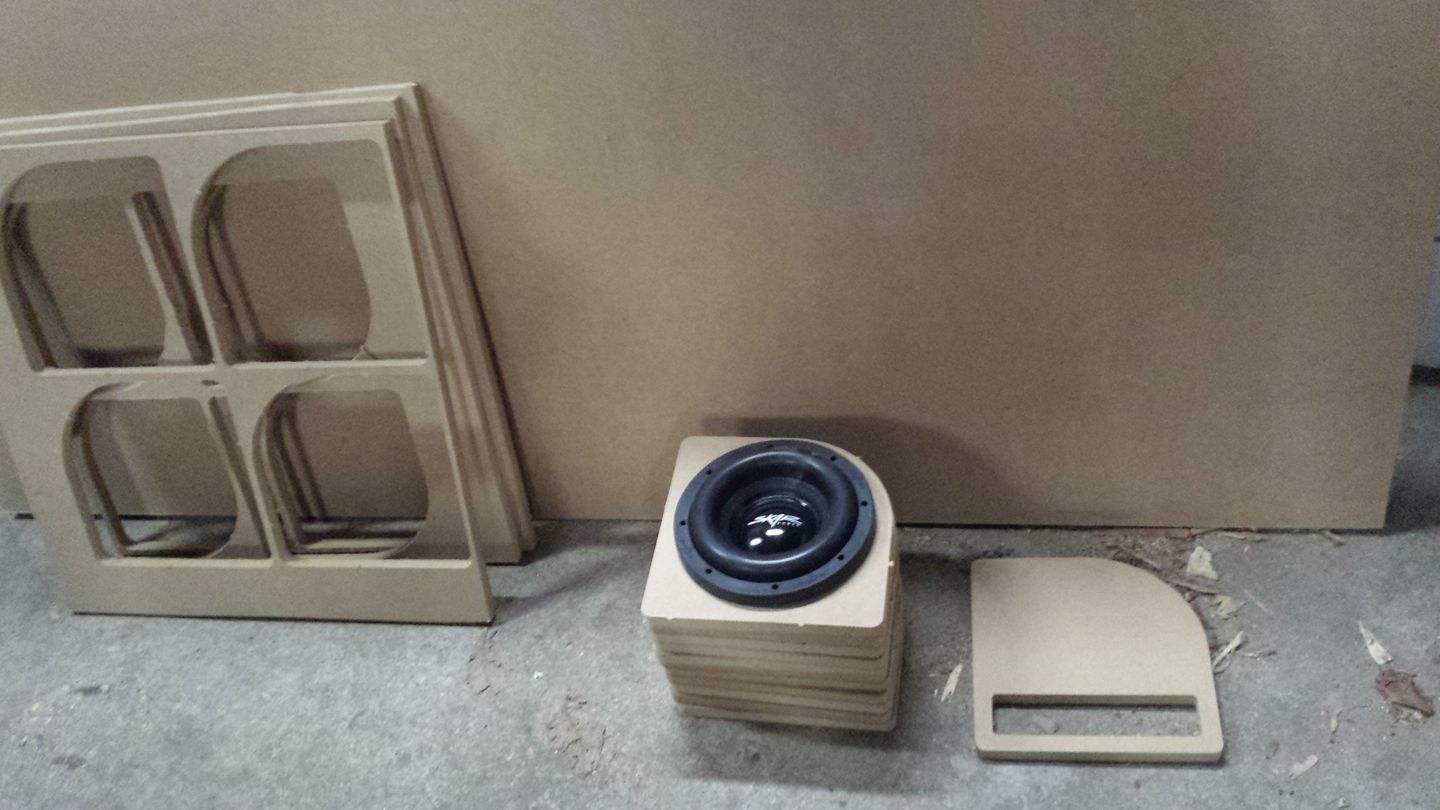 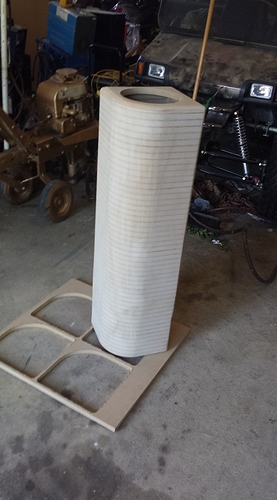 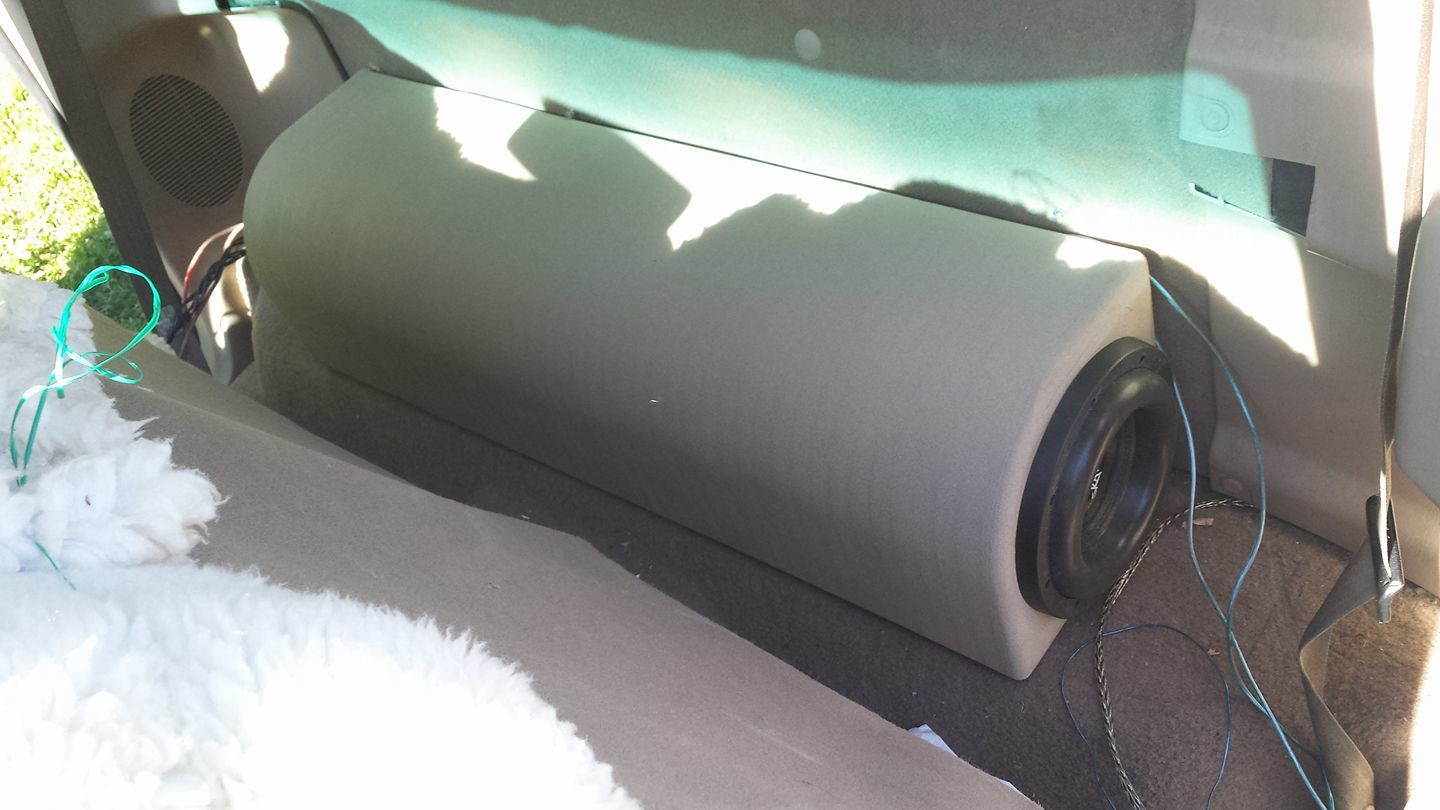 Looks cool. But why did you port a sub box? What is your port freq. You do know if you run any lower than that frequency the sub unloads, so run a subsonic filter. I built boxes for more than a decade.

up to 3db increase in output… (i never saw more than about 2db in any of my cars), boosts efficiency across some frequencies, without being as peaky as a 4th- order enclosure… did Car and marine audio for what seems like an eternity, and if the customer listened to anything other than jazz fuzion, and had the available space, it was vented enclosures all the way

https://www.skaraudio.com/collections/zvx-series/products/zvx-8?variant=18376352769
Been doing it since 1993 and I still dont like the sound of a sealed box just my preference. I just like the sound of a spl enclosure. Never seen anyone use a sealed box in DB Drag.
Port is tuned to 33Hz and the enclosure is 1.31cuft. with allowance for the .12cuft of space that the sub consumes in the box

@ShaneBell +1 on that, brother…seems to be a few old scool Car Audio guys on here… i got my first actual job installing and fabricating in 1996

I built one similar for an JL 8w6, but kerfed and bent the MDF… i’d never have thought of this back then

If the wife would only let me wall off the trailblazer with some team series sundowns on some crescendo bc5500d amps. but that would get me killed.

I got the idea from steve mead and another youtuber. If I ever make another it will have provisions for dowel rods for alignment and faster assembly

doors and rear were replaces with kicker audio as the foam rotted off the factory speakers and the kickers were on sale for something like 40%off the head unit was replaces with a pioneer avh 291bt took forever to cut everything out of the dash to get that in. and for future reference a butter knife and a mapp gas torch makes quick work of removing plastic but the metal bracket in the top right rear was a pain.

I had 4 of those in a extended s-10 some time back and explode they did lol.

We were the only shop in a small town, and sold legit gear… Wal-Mart sold Sony, and i was constantly having to remind people that Xplod was a noun, but Explode was also a verb…

my first one was 2 Roadmaster or maybe Optimus 6x9’s, with a 100w EQ/booster! sparkomatic cassette player

been there lol. I remember hitting up the traveling car audio sales that came to town every year. they had some sketchy stuff lol