I noticed I was having some carve issues and thinking it may be to the noticeable flex in the X gantry. So I decided to give the stiffing mod a try. I cut my steel bar and slipped it between the X rails.

OMG did that make a huge difference! The spindle straightened up immediately.

I clamped it in place and tightened the X gantry screws down. Surprisingly that seems to be enough to keep it in place. I left a clamp on (clear of the work envelope) until I can drill and bolt it properly. But it got me thinking.
How does the stiffing mod actually work?

As I see it, there are 3 things going on.
1 - It is a spacer
2 - It ties the 2 rails together with the bolts
3 - The steel, being less flexible than the aluminum may be adding rigidity.

I was amazed at how much a difference it made just as a spacer.
If it is more about the space that the stiffness of the steel I had a idea for a variation of the stiffing mod that does not involve drilling out the X gantry.

You use a piece of T Bar Aluminum the same thickness (t). The “T” section will keep it from slipping down out from between the Maker slide rails.
. 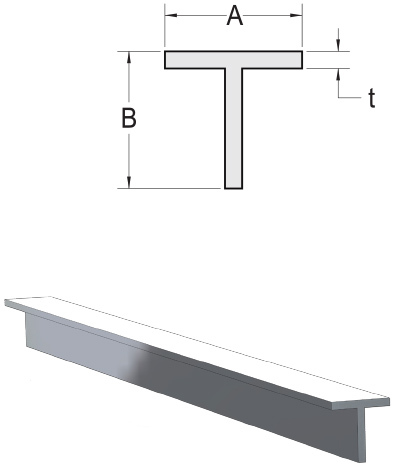 It might even be possible to get the “T” section just wide enough (A) that you could drill through it and bolt it into the T slots of the Makerslide while leaving clearance for the V wheels. That would effectively tie the Makerslide rails together like the bolts do on the original mod.

Alternatively you could insert a aluminum bar and use some kind of mending plates on the top and bottom to accomplish the same thing.
Either way, no drilling.

Would this work?
Would it be as effective as the steel bar mod?

I am going to see kind of aluminum stock they have at the hardware store and see if I can get this to work.

I used hard plastic sheet, it was perfect thickness. Cut three pieces and used flat head screws. The target is holding two maker slides together. No need for “steel” plate.
I call this Rigidity without compromising. I didn’t have to take Maker slide off. I removed Cable out, put cable back after finish. No complex procedure. As always I keep it simple.

Alan, I would love to know a bit more about your process here. What were the screws/bolts you used there? And did you just use a hand drill and go for it, put the bolt in, nut on, and then cut off the bolt so it didn’t stick out too far on the back side? Also, where did you get the plastic sheet? My dewalt 611 has arrived, I’m just waiting for my mounting bracket to do the upgrade, so I love the idea of not taking off the makerslide there - the thought of it makes me ill!

Thanks for all your help all over these forums!
-Steve

Makerslides have a bit undersized cross-section at 1m lengths. As an engineering rule of thumb, you want about a 20:1 aspect ratio (length:depth) for a beam to have a reasonable stiffness.

Even though you have two Makerslides side-by-side, this only doubles the stiffness of the X-gantry in twisting and bending in the y-direction.

If you clamp them against each other, top and bottom, you basically create a beam that has twice the depth. Structurally this increases the bending stiffness up to 16 times, rather than only double. This is because bending stiffness is a 4th power to beam thickness/depth. Ideally, the X-gantry should be a single large tube to best performance, or, as you have found out, you can simply clamp the two Makerslides together. I would do it on both the top and bottom and periodically down the length to get best results, being careful not to alter their straightness when tightening things down.

If you have a 3d printer, I think clamping an set of custom ABS parts like this would work great. Other than that, I’ve seen people get a long skinny bolt, fish it through the gaps between beams, and secure them with washers and a lock nut.

This is a great explanation.

This right here is the easiest solution, and one I was thinking of trying since it would take about 2 minutes, require no drilling whatsoever, and cost a couple of dollars in parts at most.

I used Hand Drill, screws purchased from home depot. Hard plastic is 3/16 thick, no slip on plastics. Because when Two maker slides forcing to bend, one goes up while other going down force. You can use metal but this time you have to use more bolts and precise holes not to give gap. It is very simple. I’m not after 100% rigidity here, I don’t need to. This mode gave me stiff enough Gantry, I’m holding Dewalt, forcing up and down, it doesn’t flex anymore.
I cut bolts just enough to rich nuts. I had to shave nuts a little to pass Gantry. Also One of the screw holding drag chain and two small screws holding X Homing switch was too long, I shorten them. Removed Cable (tie some string on it for retrieve back) Inserted cut plastic between rails, make the hole, insert smaller diameter Phillips driver into hole, first retrieved cable back then slowly took Phillips drivers out one at a time to make sure cable stays on top of holes insert bolts and tied nuts. That’s it. I hope it helps.

Exactly. Through the gap and multiple points. At two to four points should be sufficient.

I would try to use thick washers if possible, because a high clamping pressure can cause the bolt to behave like a wedge and push the extrusions apart a bit. Not what you want. I was thinking that rather than washers, a small metal plate with a hole in it, or a thick 3d printed bracket, would work just as well.

I do like Alan’s solution though. It’s very effective structurally, but as a test, I would just try out the bolt thing first. It should work pretty well too.

I did start with washers between the slides. But with a 8lb router, I needed more. As impressive as the washers were, I moved to pieces of 3/16" aluminum. As impressive as that was, I moved to a single $7 piece of steel plate from Home Depot. A single, contiguous piece running the length of the axis was even better. It was easy: Clamp + Drill.

It is like iron now. If I needed more, my first thought would be offset through bolts. Then, angle iron.

After all that… I still had movement… but, fortunately someone discovered the cause. The washers within the v-wheels are too thick. After replacing those with .032" thick fiber washers… No movement. NOW this thing rocks.

I consider all of this to be very, very simple mods and am now at the point of diminishing returns.

Yes Y Axis have very serious movement when you try to move from one side. What did you do to enforce that.

At some point, you can start to add too much mass to a structure. When that happens, you start to deal with vibration problems (beams vibrating) and motor torque issues. It sounds like you have a good solution going, but I still like Alan’s solution. It transfers the shear energy quite nicely. And should lighter and almost as effective.

With the y axis, I’ve seen most people just add an angle bracket bolted to the table at the mid span of the makerslide. Structurally that’s good enough. 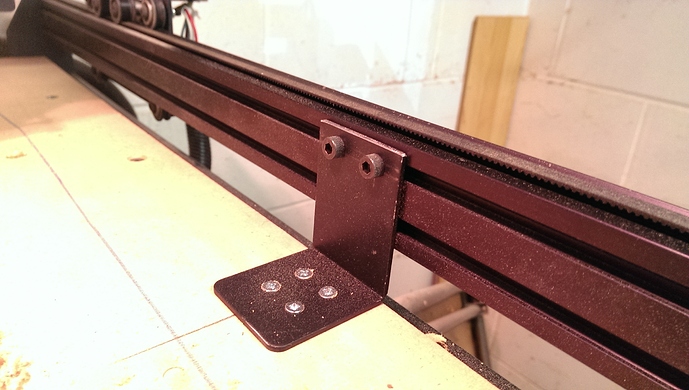 This is an important good point. I use a 48 volt Gecko system so adding weight may not work stock machines.

This mod seems to be so useful, I wonder if Inventables is working on their own version?

Angus
Interesting thought. I have some two part epoxy that is high strength designed for metal to metal. It is expensive and the applicator is also expensive.
I’m not sure that common off the shelf 2 part epoxy would be up to the job. If there are any adhesives engineers following this thread maybe they will chime in on this.

Do you think anodized surface holds epoxy. Maybe something stronger. Yes glue is today’s and future’s take over welding, only finding proper application is totaly out of my knowledge.

It was just steel laying around. I am not sure what it’s original purpose was (speaker mount perhaps?) but it was in my stock pile. I cut it down on my miter saw and drilled it. Aluminum angle would do the trick as well.

Adhesive would technically work, but there is a permanence to it. When affixing the slides against each other, you really have to carefully and perfectly align them so there is no warping or twist. With glue, any misalignment that you make would be permanent.

You would have to jig the heck out of this. Epoxy is slick when wet and part love to slide around when you are trying to clamp things up. Miss alignment would be a big problem. I do not plan in doing this even though I have the epoxy glue.