Hi Kimble,
Are you having the PI run your stepper motors directly? I’ve heard about that but it isn’t what I’m doing. I have the PI connected to the older X-carve controller via usb.
I haven’t done any of the homing yet. I just eye-ball it for now.

I used to do a few runs on the Aztec calendar and it was about an 8 hour cut. I spent time making a duplicate account in the shop for google, set up a hangout and joined from the house after the first hour. Watched and listened the whole time all was ok. Honestly now I have not been doing massive 3d or 2.5d projects due to how long the unit would run. I like to be near working on other projects personally but a 15 minute run to the bathroom or to eat some food; if you can not have faith in the unit not blowing up in that amount of time you may as well pause it restart after you get back. I have done a few cuts where it’s got 2 hours I’ll run to homedepot and come back but that’s my comfort level dust ignition if your shop is that crazy there’s more of an issue with shops mounting lasers on these imo.

I just purchased a screen set for my Mach 3 thathas “pause program” and “restart program” buttons on the run program run screen.

Since I did the upgrade to auto on/off spindle for the Dewalt 611 and auto on/off for the vac and I have my system running from a laptop with a cam built in… I leave it all the time… be it that I am in ear shot, but I can remote view from the attic craft room using Chrome remote desktop and stop the machine from there if need be. So far so good… not a perfect solution, but I don’t have to be there waiting for a job to finish.

I tend to sit / work in the room next to where I have the x-carve running. Admittedly I’ve not run any really long jobs yet though and I pop in occasionally to give it a vacuum (as don’t have a dust shoe set up yet)

I have a Raspberry Pi 3 running the UGS platform software controlling things, but also streaming a webcam attached to one of the Y-axis stepper motors. I also use VNC running on the Pi so I can keep a track of estimated finishing time, etc directly on my screen.

Works a treat so far. 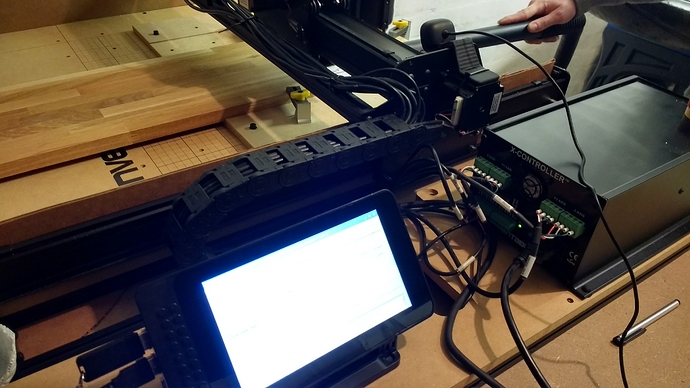 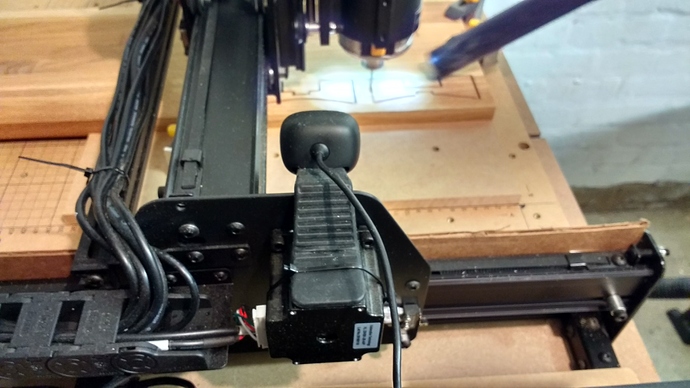 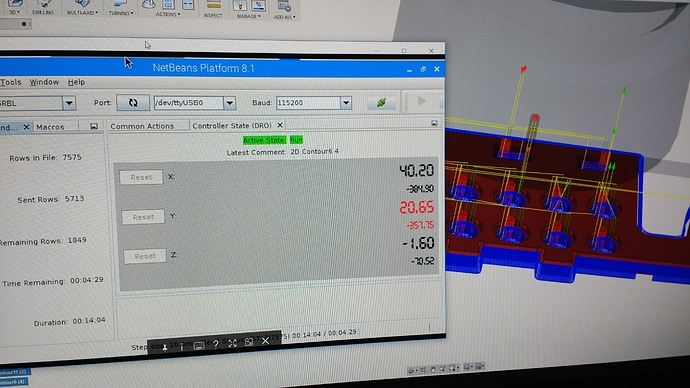 I’m like all the others. I find something to do within earshot which will catch most things. I did have a carve go wrong when the 2 sided tape gave out on the side to side part and ruined some wood. I no longer use 2 sided tape only… I’ll use screws or some way to clamp it in there to prevent side to side movement. I will sometimes briefly leave my shop for small periods of time (dinner in the house, etc), but normally when I’m carving something I’ve already been successful with in the past.

For a long carve I usually watch it for 10-15 minutes, then set an alarm on my phone, then walk away.

I setup separate short operations when profiling/cutting pieces free, and instead of tabs I’ve switched to use fairly conservative “onion skins” that can be easily cleaned up with a razor and sandpaper. As long as the piece stays clamped or glued down, I’m not terribly worried about it.

Has anyone tried to wire up a smoke detector that can fire off a Pause or E-Stop signal to the controller? I bet I could rig something up with the addition of a simple relay. Hmm… now you’ve got me thinking…

Has anyone tried to wire up a smoke detector that can fire off a Pause or E-Stop signal to the controller?

What a cool idea. One that I hope I never need, but now I have to find a way to do this for safety sake. Should be able to use IFTTT.

What a cool idea. One that I hope I never need, but now I have to find a way to do this for safety sake. Should be able to use IFTTT.

I was thinking the same thing about IFTTT. I have a smartthings hub so the smoke detector and 120v switch is pretty easy but expensive.

Most smoke detectors in homes communicate to each other over a wire so maybe there is a way to use it with a relay.

Thanks! you’ve piqued my interest and I’m ordering another Pi (have one running retroPie now) to connect to the XController.

Thanks for the link @michaywood I just got my YI camera, It was super inexpensive, very easy to set up and it provides a very nice HD picture. I have it mounted over my CNC so I can now watch from my phone while I do other stuff in the house.

Plus it will send your phone a notification if it sees movement, so I know when my son is “borrowing” tools from my workshop. And there are no monthly fees. Perfect camera!

Do you have a monitor connected to the PI for display of X,Y,Z etc… or do you have to use another system with a browser?
Are you able to enter commands directly if you had a keyboard \ monitor attached to the PI?
am I still able to use macros (like in UGS) to do the X,Y,Z touch-plate zeroing w\ the probe?

I use my 24 inch Vizio from the camper (barely gets used anyway) and I can also control the RaspPi remotely from my main Linux system.

I also use a wireless keypad remote to input commands and jog the X-Carve this is very handy as I can stand over the material as I jog getting better control of where I am at.

Yes I use the probe function in easel as well as Charlie Zero Macro in UGCS every time I use the router (don’t need with the Laser).

I think that once you get your Rasp Pi setup you will be very happy with how well it works.

Most smoke detectors in homes communicate to each other over a wire so maybe there is a way to use it with a relay.

Using IFTTT you could do something like “if smoke detector goes off then turn off power to the AC hub and send an E-Mail notification on the Apple watch” ect. ect… I really like the idea of the added protection so I’ll be incorporating this into my setup in a little bit.

The easiest and most direct route would be to get something like a Kidde i9080 smoke alarm, and then tap off the light with a relay. When the smoke detector goes off it will turn the light (and the relay) on, and you can turn the power off from there.

I think using the smoke detector idea is kind of like closing the doors after the horses have gotten out.

If there is enough smoke to set off the detector, the machine or the work piece is likely to already be on fire.
The upside is you stand a better chance of saving the rest of your shop provided you haven’t strayed too far to get back in time to put the fire out.

i also think dust accumulation on the detector’s internals could become an issue. Especially in my shop, even though I run a DC with a 5 micron bag and air cleaner, dust inevitably settles on anything left in one place too long. But since I also run a wood stove and occasionally a bit of smoke escapes into the room, a detector would be a bit useless anyway.

I think using the smoke detector idea is kind of like closing the doors after the horses have gotten out.

I think when it comes to smoke/fire every second counts, but you bring up a good point. When I was going to be using a DeWalt router with a Super-PID I was going to incorporate heat sensors into the system. Now I’ve decided to go with a air or water cooled spindle and I’ve dropped the need for the heat sensors, but I should probably keep them in the mix because they do offer added protection. Thank you for pointing this out

Add some of these.

But that makes me think if you are using a dust collector, the smoke detector needs to be next to the exhaust of the collector or it will be way too late.

That will all depend on what type of smoke detector is used, and where it’s mounted. The cost of Photoelectric smoke alarms have come way down in price. You can pick one up for around $20. The advantage of Photoelectric smoke alarms are that they’re much more effective at detecting smoke. If you use a Nest Protect smoke alarm then it actually uses a Split-Spectrum sensor, which uses two wavelengths of light to look for both fast and slow burning fires. I plan to setup my Nest Protect directly above the X-Carve, and since the Nest Protect also has a Apple Watch app, you can monitor everything directly though it, and then you can shut the X-Carve off if need be.