While running a program, the spindle will cut the stock material in paths not seen in simulation.

I use Fusion 360 to create programs that I upload to Easel and run on my XCP.

Fusion 360 does not show the path in simulation or in gcode view.

Easel does not show the path when previewing the uploaded gcode.

To my knowledge, I’ve only had the problem when running 3D-type processes. Most notably, 3D-Adaptive, 3D-Contour, and 3D-Spiral.

I can go into greater detail, and provide pictures. I just don’t have them on my device at the time of this post.

Hey Zachary, If you could post the photos that would be great, But also if you can provide your grbl settings, to get these go into machine inspector (press ctrl+Shift+D) and scroll to the bottom to see this data.

Here’s the defaults that I have in case yours are different. Example Picture #1 - running a 3D Adaptive program on plywood. Simple pockets with a 0.25" down-cut bit. The machine took off in the X+ direction. I monitored the machine, and held my hand on the stop button. Strangely, the tool then returned after travelling about 14" outside of the stock and completed the program from the correct position. 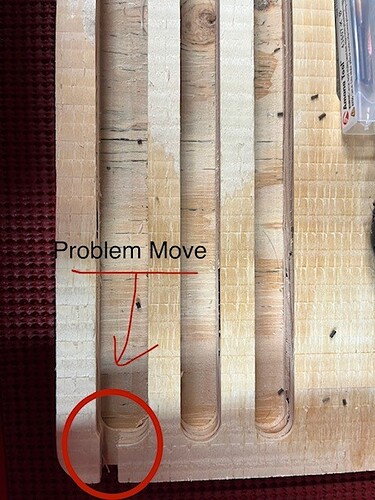 Example1_Plywood_0.25-2F-DC480×640 95.4 KB
Example Picture #2 - Running a 3D Contour program on UHMW. The machine took off in the +Y direction this time, and I stopped the machine before it ran into the hard stops. 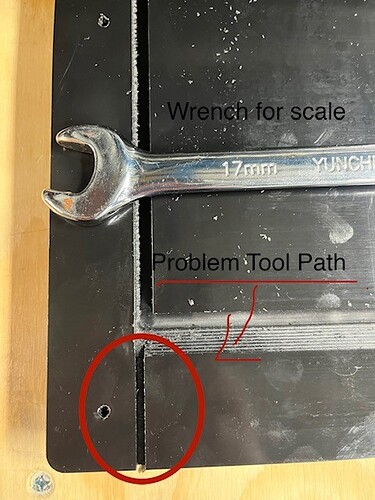 Edit: SethCNC, thank you for getting into this topic with me. I have continued some research, and supplied the intended toolpath *.nc for the second example picture. This should demonstrate the apparent mystery of the tool path problem.
PV2MT- Slope Pocket.nc (319.7 KB)

I hate to say it, but I would contact Customer Support with this one. That toolpath isn’t there. There’s no abnormal toolpath surrounding. The only thing that I’m kinda thinking is that there may be an issue with the firmware version on the CNC, I do know that they released new firmware recently for the XCP and this uses a slower baud rate, which is a common fix to packet loss at the faster baud rate.

Personally I don’t love that $122 is set to 500 on the XCP, I think that’s too fast acceleration for the Z axis and can result in the Z jamming up more easily, causing it to not lift up at times… . . I would change this to maybe 200-250, it will have a very small effect on carve times on average (maybe an extra 2 mins on a 3 hour carve. . . ) 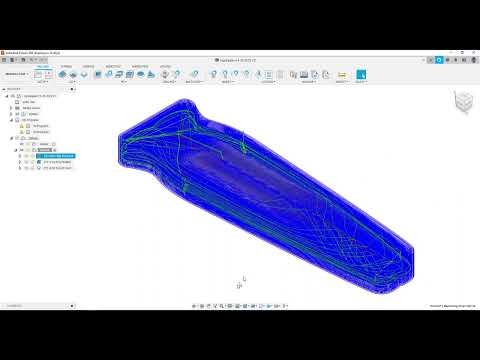 @SethCNC I have an open ticket, and I’m working with some good people at Inventables.

The problem has occurred a few more times, and they have asked me to try a new computer. Perhaps a linux issue or machine specific, so now I’m using a fully capable Windows 11 Desktop instead of an intel atom running Ubuntu 20.04.

Good morning, I seem to be having the very same issue. I saw in another post that it looks like you stopped using Easel and went to Universal GCode Sender? I assume that customer support could not help to isolate and correct the problem?

Hi @JaredMckie: I want to be clear that the problem is corrected with the system I’m currently using.

I did not isolate the root cause, but when I have time I plan to switch back to the Ubuntu mini-computer to see if the problem comes back.

I have completely stopped using Easel to control my machine. I use Universal GCode Sender (64bit) now, and haven’t seen the unexpected tool paths since switching.

Eliminating the browser from the equation is a quality of life improvement. It is much more like operating a HAAS or Fanuc machine controller and operator interface.

I outlined the setup in this post, so I won’t repeat here. If you have issues transitioning, put up a post about it. This forum is overdue for a dedicated troubleshooting guide.