In the middle of a very long carve, Universal Gcode Sender crashed with an I/O error and the router stopped in place. I’d like to complete the carve by restarting UGC with the router in its current position. Anyone have suggestions on how to handle this?

I did not home the machine for this run. After placing the piece to be carved, I set the router to X,Y,Z zero in UGS and started the carve.

Here’s a picture of the computer screen at the moment: 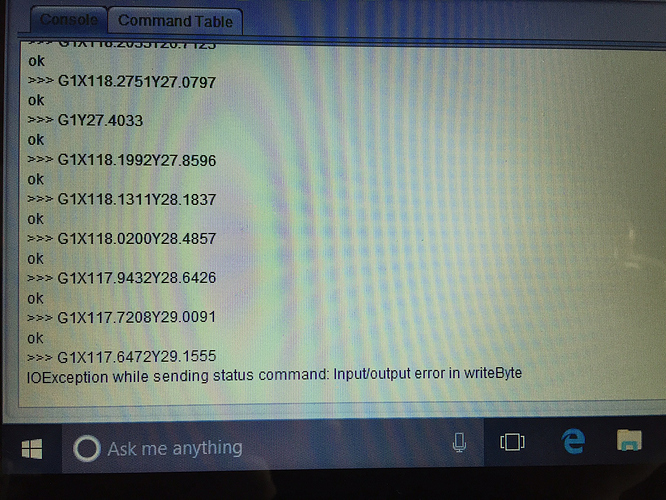 Well, that’s a lesson for me then! Over time I’ve gotten lazy about homing the machine for each run. Should have taken that extra step since I knew this was going to be a lengthy carve.

I was thinking of editing the gcode file starting at the last statement and simply continuing. No good???

you ever see this error?

No. USB problems tend to hang. This might be a case of a G-code file that is too long for UGCS (more likely in 1.0.9 than the nightly build).

Once the crash happened, I only turned the router off. I haven’t powered either the laptop or the X-carve off.

Using another computer networked to the controlling laptop, I’ve been able to find the line in the gcode file where the error occurred.

The gocde came from Vcarve using the X-carve PP. The gcode has 157926 lines so I’m closer to the end than the beginning.

No. I only started UGS, opened the Gcode file from Vcarve, reset X,Y,Z zeroes and started it. I have had UGS freeze on other carves in the past.

I’ve been looking for a gcode command to tell me what the current X,Y,Z status is of the router. If I knew that I should be able move the router back to the original X,Y,Z zero, edit the gcode file by removing commands that have already been done and continue from there. So far, I’ve not been able to find a gcode command to tell me the current position. Any thoughts on that???

Yes, I see those (photo below).

Interesting, that the X,Y work positions don’t match the X,Y values in the last line of the gcode sent. Maybe there’s some buffering going on???

Hi, Phil…sorry, but I don’t understand what you just wrote. Are you saying the X,Y,Z values displayed in the first photo (just above the error message) are better than those (Work Position) values shown in the second photo?

I’ve found that “?” displays Grbl’s active state and the real-time current position, both in machine coordinates and work coordinates.

OK. If I use these values and get my router back to the original X,Y,Z zeroes, do you think I can start the carve up again after editing the gcode file? I would keep the first few lines:

to get the router from zero to the new starting position.

I just tried to use UGS and it’s unresponsive. I guess I’ll have to restart the program and use the positioning values to get back to X,Y,Z zero.

Most likely you have already done something and recovery is not possible, but if you haven’t moved anything you still might be able to recover.

I only turned off the router. It’s position did not change. When I tried to click on UGS there was not response. I haven’t yet restarted it. Can you suggest a way forward?

Chances are not good that you can recover, but depending on the design you might be able to save it.

If you have any alternative, you might want to go that way.

What I would have you do is go through a procedure to try to recover Machine Zero (you need to become a homing fan) and then Work Zero.

Both UGCS and grbl buffer commands so the co-ordinates that show in the photo above may not be where the machine is actually located in your design.

If that’s the case then I don’t know anyway to recover.

You could try to re-align the machine with your original starting point, but that’s a high risk maneuver as well.

What I would try is rather involved and it will take some time to enter it here.

Basically the method is to use the co-ordinates in your photo to re-sync the machine, but if you move the spindle at all then it won’t work.

Let me know if you want to try it.

Yes, thanks very much! I’d like to try. What I’m carving is this putterhead out of African Blackwood::

The spindle stopped in one of the holes. As you can see, it’s not a complex piece, but it’s taken so long to get this far that I’d like to do everything I can to salvage this carve. I’m pretty sure that what’s left to carve are to deepen the holes and to finish the outside edge.