I’m doing some experimenting with GWizard. I was wondering if my calculations seem sane to those with more experience.

I’ll share the resulting calculations and the tool geometry I defined via screenshots.

Is this reasonable? Conservative? I’m obviously trying to achieve that balance of chatter-free accuracy in the shortest cutting time with nice chips instead of dust. The Dewalt is running at its base speed of about ~16,000 RPM. I chose the 40% cut width/step over based on some remarks I saw here in the forums. I’m going with about 20% on the finishing passes. I’m using Fusion 360.

I have done some test cuts prior to using GWizard where I was winging it more. The main problem was I think I was using a default Fusion step over that was nearly the entire end mill width. After slowing things down a bit, I reduced chatter a lot, but would tend to run into it during the finishing passes of all things. I ultimately stopped using the option to do finishing only on the final pass (think it was asking a lot of the end mill at 4mm deep having not finished at all along the way). The result was about 85% done on the cut, then suddenly having certain finishing passes chatter so hard it flat ruined the piece. Hence my move to using GWizard here to bring some real calculations to my process. This is the (slowish) feed rate GWizard calculates, but I can push that as high as 2000mm/min before hitting red numbers in the deflection calcs. Somehow, I’m doubting I can pull it off at 2000mm/min without trouble and this represents about a half hour or more difference (per Fusion’s not always accurate simulation estimates) over the 956mm/min it suggests. 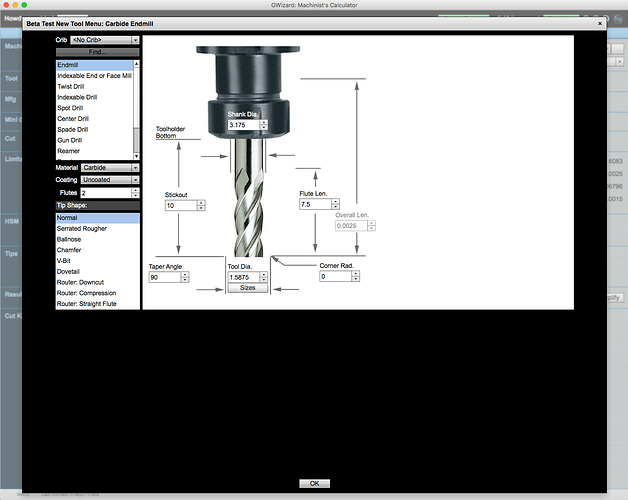 I have been playing with G Wizard as well.
First you need to slide the “gas gage” bar (Turtle and Rabbit) back a bit
I use “Finish” for fine cutting and “Light Rough” for rouging

Also check your RPM. Changing the RPM will have a big impact on the feed rate as well.
It wants to run at the max RPM which requires a bit too high of a feed rate for good results.

Also look at bit deflection. That is the number I keep a eye on. And that seems to be most affect by depth of cut and stick out.

It is not the easiest program to figure out. But it had given me some useful numbers.

I had to really tighten and tune my machine to use the recommend feed rates. And still have issues with 3D carving. But I have been able to work at extremely faster feed than the easel defaults.

Also, remember that the max plunge rate for the XC is 500 mm/min.

You can change the max plunge rate.