I want to carve a channel with the following dimensions.

How do I design this in EASEL.

Simple if your material is 25" long.

So the channel would slope. I’m not sure. Could be a way. I will be watching to see what ideas others have, because I’m fresh out. Easel pretty much only carves in two dimensions.

You can use the Super Gradient App by EthanKinney and set the number of steps to the max.

This will not give you a completely smooth slope, but it might work depending on your needs.

Raise your stock on one side.

Easel dont have an easy way to do what you want, you can try the gradient apps suggested but your milage may vary.

I can do it in CAD. The question is will EASEL understand this when I import? Does the carve software recognized this and vary the z-axis accordingly.

Raise your stock on one side.

@HaldorLonningdal, this was another option I was going to mention, but the OP will also have to the issue with the “deep-end” of the pocket having an angled edge. One would have to lay the stock flat again to mill that straight down, but then that poses another issue with the bottom being flattened out at that spot. I even made an image of it in Paint, but decided not to go down that rabbit-hole…

Here is an image that shows where the problem area would be; Note the area where “Note*” is located… 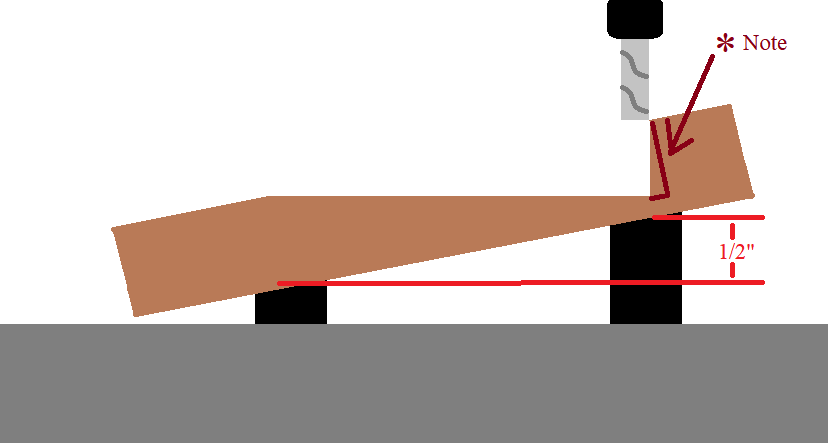 I’m not saying it can’t be done and it might fit the requirements, but this issue is definitely worth noting.

On more sophisticated machines I’ve seen the Z-AXIS can be controlled as a function (slope). Using a ballmill bit then provides the results I am looking for.

So, I this and issue with EASEL or CARVE. Hence my original question. Does EASEL or EASEL PRO provide such functionality that then is converted to GRBL.

This is an Easel limitation currently. The X-Carve itself with the GRBL firmware is fully capable of 3D carving (i.e. moving X, Y, Z simultaneously).

If you have software that can generate the G-Code then you should be able to use Easel to send it. You would need to ensure that the G-Code conforms to what the GRBL firmware in the controller is expecting.

You would likely want to rough clear out the path using BrandonR’s suggestion of the Super Gradient app or just making a series of lines at gradual depths.

Example is only 8" long, but the same idea. You can see the bit path looks like it is just one line, but it goes in and out at the same point, I’m not sure how that will affect the deep end.

I just zoomed in on the bit path and noticed there is some movement at the center of the circle. The longer of the radial lines is less than 1/16" - you might want to play with the circle width and depth of cut depending on how precise it needs to be.

Awesome solution. Now that is thinking outside the box.
How many more ways can we skin this cat?

Easel is calculating the V-Bit path with basically an infinite cut height V-Bit which is why you see the path of the circle carved out with no circular motion no matter the thickness of material. Since the height of a V-Bit’s cutting surface is not taken into consideration a straight plunge looks like it cones out completely no matter how thick your material is.

The little spurts of X/Y/Z movement you see at the very bottom is Easel clearing out the point at the bottom. This will occur which will cause the 1/4" bit to engage the material at that 1/2" depth…that may not go so well…!!

That being said, you could get Easel to generate that G-Code file for you and manually remove those paths. This is NOT something you would want to do unless you know very well what you are doing!