Starting a new topic where Vectric Vcarve users can post handy tips they have learned that may not be obvious to others.

For example yesterday I learned that I can pan around in the 3D render of the Preview tool path (where it shows what the final carve will look like) by just holding down both mouse buttons and moving the mouse.

Before I found this I could zoom in (with the mouse wheel) to see detail, but then it seemed I was stuck looking at that one section it zoomed to, But now I cam zoom and roam around the entire model.

If anyone else has discovered useful shortcuts or tricks in Vcarve I would really like to hear about it.

hold right mouse down to zoom, left mouse to rotate, both to pan

same goes for the 2D tab. mouse wheel to zoom and pan

Holding the center mouse wheel down does not do anything on mine.

You can open more than one Vcarve on your desktop, just jump between for copy/paste or any references from previous drawing.

That is very useful, I wish there was a way to copy an entire layer from one project (along with toolpaths) to a new layer in another project.

You can go to Layer tab at the bottom left, copy the Layer and paste into another project.
Forget it It was name copy only.

That must be a “Pro” feature, don’t see it in Desktop version.

Wow, I never knew about the panning feature, I feel like an idiot. I’d just shrink my workspace down so I could get closer to the section I wanted to see. That’s going to help a ton!

Maybe others already know this, but I just figured it out yesterday that I can create a complex 3D shape in Fusion 360 and export it as an STL for loading into Vcarve, where it can be scaled and combined with other shapes.

I know that I could just create the toolpath directly in F360 but I really like how easy it is to just let Vcarve create the rough and detail for me.

I leaned an interesting lesson this weekend with Vcarve.

I was making a small plaque. I wanted a 3D ribbon to stand above the surface and then have vcarved text on the surface.

So I found an STL file of the ribbon I wanted, and had Vcare do the 3D rough and detail toolpath with the Machining Limit Boundary set to the profile vector for the plaque (so the entire surface around the ribbon is milled down to a depth of .35 inches leaving the ribbon above.

Then I wanted the text to be carved with a 60 deg vbit on the new surface.

This is where I learned something new. When I defined the toolpath to cut the letters, I figured that I would just use the Start Depth field in the V-Carve/Engraving Toolpath to start the depth at .35 inches. The 3D preview showed exactly what I wanted so I saved the toolpaths and started the job. It took about 2 hours to do the rough and detail 3D pass and I was very happy with how it turned out.

I changed the bit to use the 60 Deg vbit and started the letter carving toolpath and watched as the big bit drilled down into the surface about half an inch making a huge hole and ruining the work (and a really beautiful piece of Maple). Crap!

I opened the letter toolpath in a text editor and saw that the X-Carve did exactly what it was told to do.

I went back to V-Carve and checked the toolpath to see what happened. It seems that if you have used the 3D carving toolpath, the startdepth value is calculated from the new surface after the 3D cut is made, but for some reason the 3D preview does not show this correctly.

The correct way to place the text on the new surface is to check the “Project toolpath onto 3D model” check box. Even if the text is not really on the 3D model, but is just on an area cleared when the model was cut.

Another lesson learned (the hard way)

Here is the second attempt that came out the way I wanted. Now I just need to apply some stain and finish it, 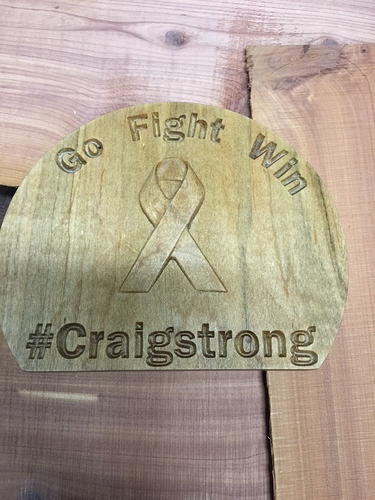 I just found out that when editing vectors, if you hold down the ALT key then when you want to move a node it will be constrained to move in only X or Y (depending on if you start moving it horizontally or vertically)

This is very useful if you are wanting to keep key parts lined up.

I am making an MDF mold to pour a pewter medallion for my daughter going off to college. The mold is complex and needs 13 tools paths with 4 different tools. When trying to save the different paths it was frustrating since I could not see all the paths on the screen at once in the small window at the bottom of the toolpaths window when in the Save Toolpath mode.

Then I discovered the little button in the bottom right of the screen (I never noticed it before). When you click it, a new window will open with all your toolpaths and you can drag the new window over so you can still click the Save ToolPath button. This made it much easier to create the toolpath files.

Just posting this in case I was not the last person on the planet to find this little button and how useful it can be. 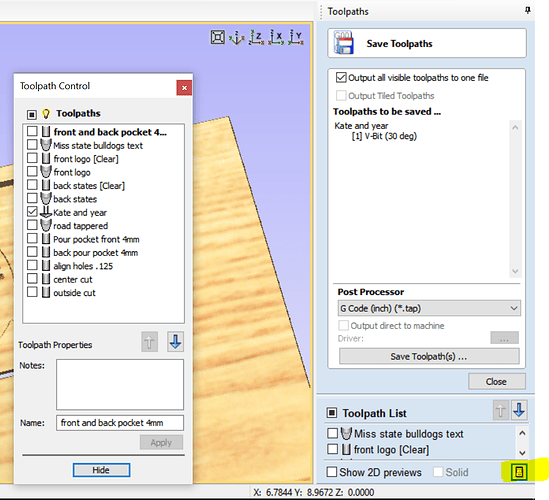 And some day ask me how difficult it can be to pour a 4 inch medallion. I am on my 4th attempt today.

Great idea. Does anyone know when ver 9 is coming? Will ver 9 be effective for the desktop or just the pro version?

Desktop and Pro will both upgrade to version 9.

What that means, vectric give a way or paid upgrade. Looks like I missed something.

According to Vectric the upgrade policy is that when you purchase a Vectric product you get upgrades free for 1 year from the time of purchase. So if you bought version 8.0 then you got version 8.5 for free but there will be an upgrade cost for version 9.0.

I was just reading the upgrade doc for version 8.0 and wow, it was huge update over version 7.5. It provided the ability to carve 3D objects from STL file, and all the 3D tools that now in use. It also allowed merged toolpaths so you could combine all the toolpaths using the same tool into one file, plus lots of other smaller stuff like last pass tolerances etc.

So I am expecting version 9.0 to add some really amazing features. There has not been any announcement from Vectric as to what new features will be in 9.0, but I would not be surprised if they added a lot of the Aspire 3D editing features.

There are a bunch of YouTube videos about some of the new features of V9.

Where are the videos at?