Which is Easel and which is not? 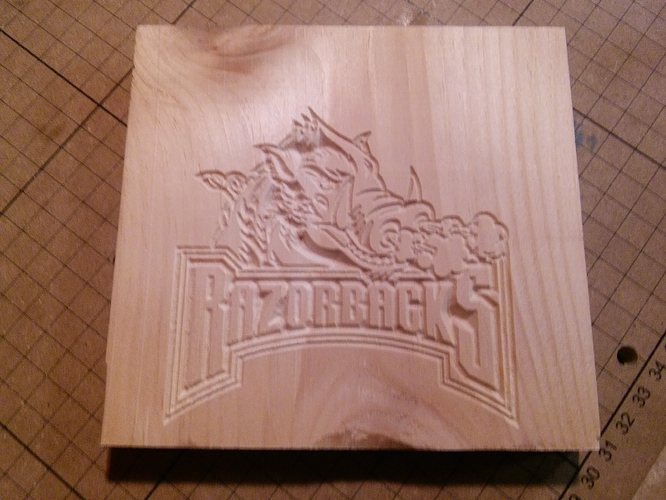 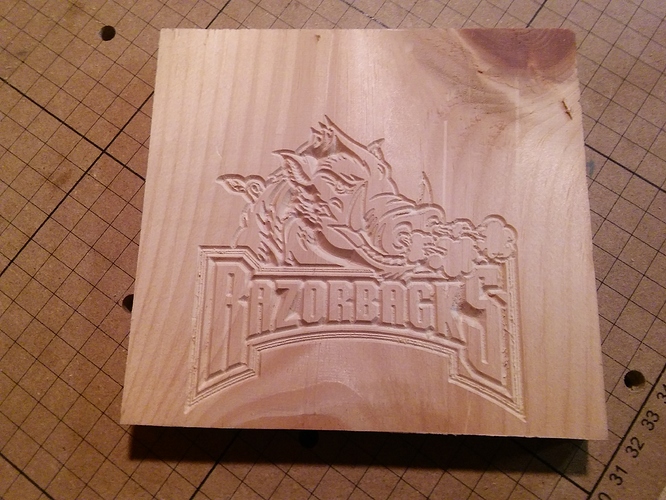 Both of these were carved with the same set up, and on the same piece of wood. One was created with Easel Pro, the other with Carbide Create. Anyone want to guess which is Easel and which is brand X?

Hard to tell isn’t it.

Yes it is difficult to tell.

Was this an image you imported into the software

I used Inkscape to create the svg file that was imported into Carbide… The biggest difference I can see so far is time.

It does around some of the letters to me. The top is Easel. The Bottom came out pretty good for free software though.

I think with some tinkering it’ll work fine. I want to try V Carve, but $350 to $500 this close to the holidays is not gonna happen.

I agree. I would love to get vcarve desktop. But this is only a hobby and I do not make money from this stuff

It does around some of the letters to me. The top is Easel. The Bottom came out pretty good for free software though.

The bottom picture is a much better image. Either the top image is not as good, or the camera was out of focus on that one.

I don’t even understand that question. If you feed the same image to any software, the resulting carve is supposed to be exactly the same, which it seems is the case. Apart from one pic being out of focus.
So you are trying to prove the obvious here.

Only thing that could be different between the two is toolpath optimisation which will affect cutting time. But we can’t see that in a picture. So the only relevant question is: what were the respective cutting times?

The real question I was getting at is does anyone really need to spend $150 to $200 a year on subcricption fees when free software will give you the same result? Inventables sold machines with the promise of free use of their website ( not a very good business plan in the long run) and now things are changing. Carbide Create (free), Inkscape ( also free) and Fusion 360 (free to hobbiests and students, will get the job done without an annual dee.

Then don’t use easel pro. Simple as that.

I don’t get all the drama tbh. There are (free) alternatives, and Zach is even pointing people towards them. So nobody is forcing anybody into a subscription plan. Did anyone really believe Easel was going to eventually evolve in to a full 3D suite without added cost?

I have never even installed the Easel driver. Never needed it as it always seemed very limited to me. I never even once missed it. Did I say never already?

I still use Easel as my GCode sender even though most of my design is in Fusion 360, and Fusion has a post processor for Easel.

So when you are using Carbide Create what are you using as a GCode sender - is it possible to use Easel or do you need to use something like UGS?

Best reason I can think of is if you have a Carvey and use any other machine control program (ie G-code sender) it voids the warrantee on the Carvey. I think the reason here is that Easel/Carvey use an internal counter for carving hours to determine the end of warrantee.

Yes, you can use Easel as the G-code sender for Carbide Create files with the noted exceptions above.

Correct. UGS. I don’t have a very strong wifi signal in my garage, even with an extender. UGS has worked really well, but I might try Mach 3.

Mach3 is awesome and what I use, but it will not work with the X-Carve electronics, neither the G-Shield nor the X-Controller.

Didn’t know that about the warranty. I used Easel to drive the machine a couple times, but I just don’t care for it. I do design stuff in Easel and will continue to as long as it’s free, but it’s always good to have a backup plan. What happens when the Easel server crashes? Plus I really haven’t made any money at this, so I can’t justify the subscription service fee.