You don’t need to wire it that way. The relay works with an input logic signal in the 3 - 32 VDC range. What you would need to do is to hook the spindle control wires from the Arduino/gShield to the SSR on the input side. If you wired your machine according to the Inventables instructions then you would hook the black spindle control wire to the - Input terminal and the yellow wire to the + Input terminal on the SSR.

The AC side of the relay would be wired as in the diagram.

Hi @LarryM - thank you for your reply.

I am very much old school - I am used to the mechanical relays where you have 3 wires - V+, Ground, and the trigger - this SSR is too smart for me

So as I understand it (please correct me if I am wrong) - I should connect to the DC side of the SSR like this:

The positive terminal will be linked to “Spindle Enbl” on the Arduino - I.E pin 12

The negative terminal will be linked with the Arduino “Ground” - I.E pin 14

I reckon the Voltage will come from the cards power supply.

If you are running grbl version 8 then the spindle control is D12.

If you are running grbl version 9 then the spindle control is D11.

That is the control signal that you want to use (yellow wire).

The black wire goes to ground on the Arduino/gShield or any ground that is common to the Arduino. Looking from left to right on the connector with the homing switch/spindle control, it would be the 7th pin keeping in mind that 1 and 6 are empty.

The input to most SSRs is hooked to an opto-isolator which draws very little current. Somewhere in the 10 to 20 mA range. This amount of current can be supplied by the Arduino I/O pin.

This is much clearer now.

alright @ErikJenkins how exactly do you have this wired? a photo if you could i thought i had it wired right and turns out i had it wrong nothing gave me the magic black smoke or anything but its wrong 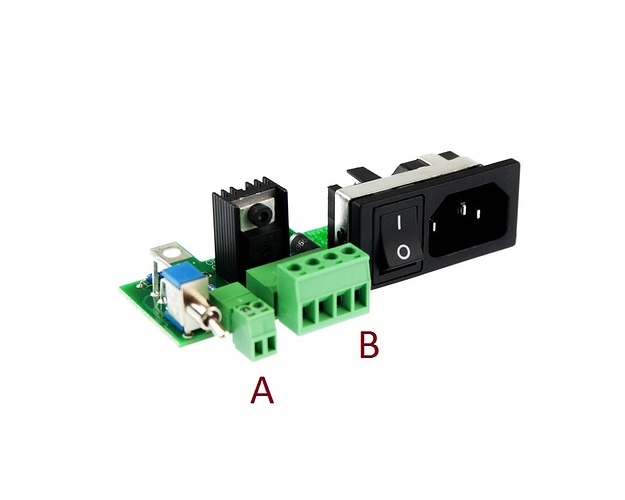 Once wired, the switch on the power supply must be in the logic position, the router plugged into the relay in one of the “Normally Off” plugs, and the router power switch in the “On” position.

I got it , stayed up wicked late messing with it thank you

That would probably work fine, I was just using the logic from the power supply…

I just thought of a function you gain by wiring the way you did. The switch on the power supply circuit board will let you turn it on/off manually or control it by the logic position.

Yeah, but he already had the PSU terminal board switch

I did something similar with the SSR that Inventables sells. However, I found that to drive the SSR reliably you needed to drive the relay signal through a transistor with the appropriate resistive loads. I used a 2N2222. See the Fotek Datasheet page #2 “Applications Hints” NPN NO (normally open). The resistor between pin 4 and V+ should be about 10K ohms, and the resistor between the signal and the transistor base should be about 1K ohms.

@BennettMarks what source did you use for V+ in the NPN NO scenario?

The +5 on my breakout board.

Just seen this but I wanted to throw this in for Future Ref:
http://www.phidgets.com/docs/Solid_State_Relay_Primer 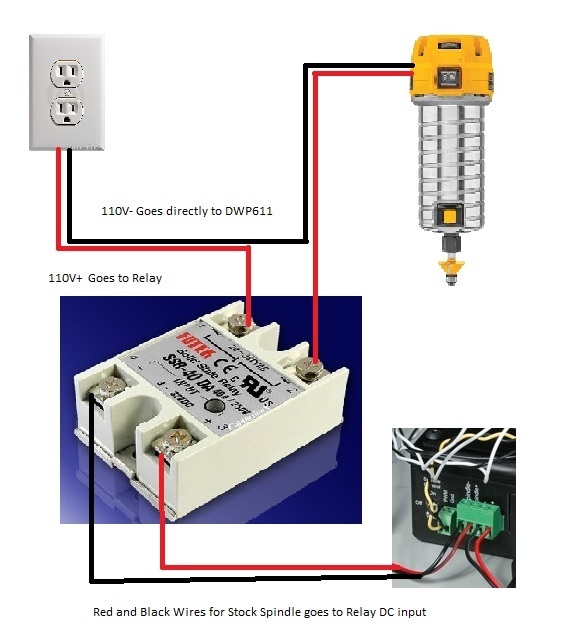 Nice picture, how did you draw this.

Along with SSR is is also wise to add a surge protection component, seen here as the “puck”:
http://www.phidgets.com/wiki/images/thumb/c/ca/Relay_mov.jpg/180px-Relay_mov.jpg

Disclaimer:
My electronic skills are just above average, but I am not trained in this field.

did your forefathers run an xcarve in Dunvegan Castle?

aye, the old two handed carve , some fine art created and left on the heather,