My friend just bought a bought a house so I decided to make him something as a housewarming gift. He loves visiting National Parks in the US so I decided to make him a map to mark where he has been. I was able to easily find a SVG of the States, but soon realized that for my design I had to figure out how to get an outline of the whole country instead of the state borders. It took a while to figure out the best way to do it, but it gave me a chance to get more comfortable with inkscape. 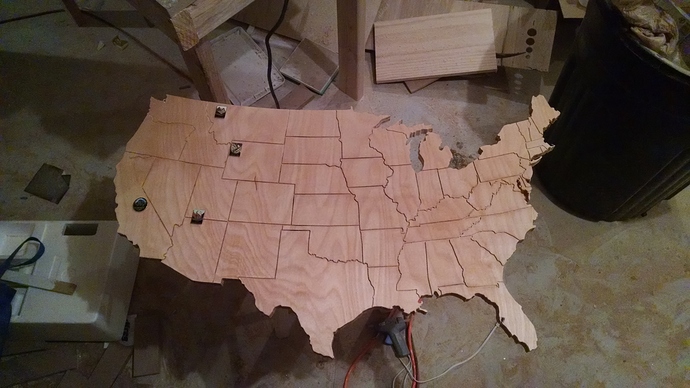 I simply engraved the state lines with a 1/16" bit and cut it out with a 1/8" bit (I wanted to preserve the details as much as possible).

It is roughly 22 by 36 inches in 3/4 plywood. I expanded my work area recently and this is the first time I have made something bigger than the normal 1m machine allows. 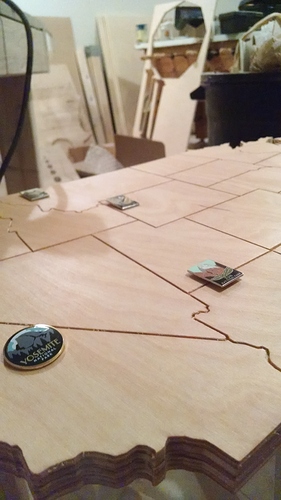 Killer idea and great job! What a fun project and your friend is going to love it!

Do you have the files this? I would love to cut a map like this.

I was looking for X-carve ideas and found something similar to your national park map, very cool BTW, I came across a beer cap map that is really cool too. With all the craft breweries around the US it would be fun to fill up. Adventures in drinking! 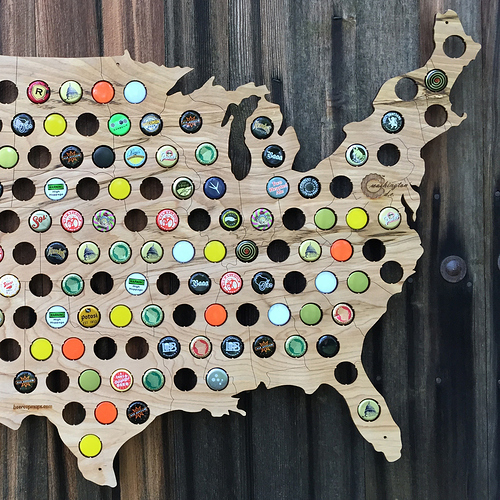 I think this is the one you’re looking for. Let us know if it works for you.

While the files posted by Alan will work separately, you will run into problems if you use one for cutting and one for engraving on the same piece. If you look at them, the outside borders do not match up (the state outline file is far more detailed). To pull off a clean border cut, both files need to perfectly overlap. When I get a chance this weekend I will post my file which should work.

That’s crazy that you brought that up because I actually did a very similar project a few years ago on my shapeoko 1 (heavily modified). Instead of using a grid of holes, I lined up the pockets to mark geographically where the breweries were located. 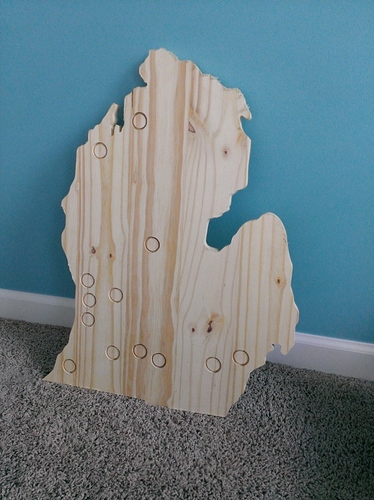 So, I didn’t try that as an whole part. I cut several states separately. Go ahead and you post the correct one if it’s possible.

Oh Michigan, you live there? I live between Detroit and Ann Arbor, but have family in Grand Rapids. Lots of good breweries in Michigan. I’ll be making one of those as soon as I get the last peice of my machine, the X-Controller.

@NickHomrich yeah, I live in Grand Rapids. The explosion in the number of breweries here was part of the motivation for making the map.

@AndrewWatkins Here is the file I used. When I converted it to dxf to use in CamBam, I had to fix a couple things but it should work fine in easel. It includes both the state borders and country border. Hope it helps!

Hello this maybe a log shot being this is a old post but would you still have the svg for this i have been trying to cut out this but all the dxfs i get dont seem to cut out good i keep getting double cuts on all my states. Thanks 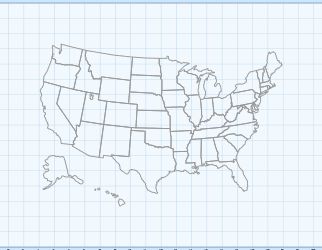 Thanks i will try this one out

The original post shows the piece is too big for the 1000mm xcarve. i’m getting ready to order this week, can something like this be shrunk to scale to fit on the 1000mm? Thanks and cant wait to get started
.

Yes, if you open the Easel file you can select everything and resize it to fit your needs.

Do you know what your cut details were like feeds bit size things like that i tried using a 1/16 bit but i’m getting gaps between my states i have tried cutting on path and outside line but get same results.

Are you cutting the states out individually?

I have never cut it out,I just designed it. Its all ONE single outline and if you select it to carve on path then it should only be one line. If you select to carve inside or outside the line then it will carve 2 lines. Could you take a picture of what it looks like? Neil did you take a look at the file? Did you see anything wrong with it?
Thanks