I just published on Thingiverse a 3D printed stiffening bracket I’m working on. Each of these brackets would be fastened to the inside groove of the Y rail with a M5x10 Round Cap Screw and a pre-assembly insertion nut. A Kreg 1 1/4" course pocket screw would then be used to fasten the bracket to the work table. For starters I’m planning to put 6 of these on each Y rail of my 1000mm X-Carve. I was originally going to make the bracket to tie the Y rail to the outside of the bed frame, but I think attaching it to the table will be better.

The design is online, so if anyone would like to join me for the ride you’re welcome to.

I like the idea. I was getting some chatter all of sudden last night so in my process of making sure everything was nice and tight, I noticed there lots of flex in the y rails when putting a bit of pressure on left and right on the z carriage.

I don’t own a 3d printer but have a friend that does. Being relatively unfamiliar with 3d printing, will those brackets be stiff enough?

The most common type of plastic used in 3D printing is PLA which has a property of being very rigid to the point of being brittle compared to the other options. Well in this case rigid is better and I’m hoping that having enough of them will avoid brittle being a problem. I’m actually using a slightly improved type of PLA called PLA+ and when I tried to snap a test piece in my hands I couldn’t do it. The bracket is 4mm thick and 20mm wide, so the forces should have a fair amount of plastic resisting them given they will be pushing straight down or lifting up, but not in a bending direction.

Sounds intetesting. I don’t have a prinyer either but might want a set.

I was watching a video recently on filament strength. THey printed hooks and hung weight off them. ABS was the weakest, then PLA… then it was a nylon one… then the one that has the carbon fiber in it. it was interesting

oh I am sure it does… in the video they show that they were all printed the same.

Phil, you have gotten me really looking at 3d printing as an option for a product I want to make for use in my business (solar).

Your design (beautiful rendering BTW) attaches the bracket to the waste board, what I designed attaches to the table the X-Carve is sitting on which means I’ve got to fit in the 4mm gap between the outside of the waste board and the inside of the Y rail, so I made the piece that full 4mm - the only way I could have a rim is to go thinner for the body and then thicker for the rim, but I’m guessing that wouldn’t be as strong.

That’s interesting, I was only thinking of bolting into one of the two Y rail slots, not both of them and that could change easily. I had thought the bending force I had to deal with was along the length of the Y rail, not twisting the rail - I only thought of my bracket as resisting a push down to the table or up away from it, so having one tie point to the Y rail seemed sufficient.

I’d reduce the flats between the radius on that new wall/rib.
That way you have a decent chance of printing that part without support.
Great addition btw

I would actually recommend printing any of these with the vertical part down on the bed - you want the layer lines for the part going vertically when installed so it has maximum strength in that direction.

My first iteration had the screws attaching it to the table going straight up, but that would be awkward to fasten, so I bumped the bottom out just slightly and then angled them at 15 degrees so the driver would just clear the Y rail.

This is only a suggestion. Not a method.

Back when still was using the SO2 chassis I used L Brackets from Home Depot as my mid-span supports.

(I don’t have a tighter shot of the bracket, This machine has been retired 2~3 years ago) 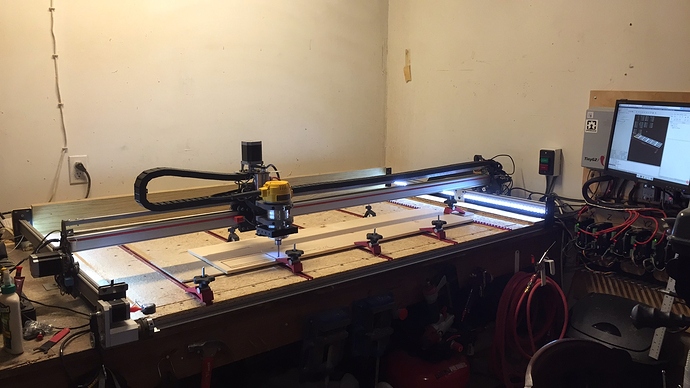 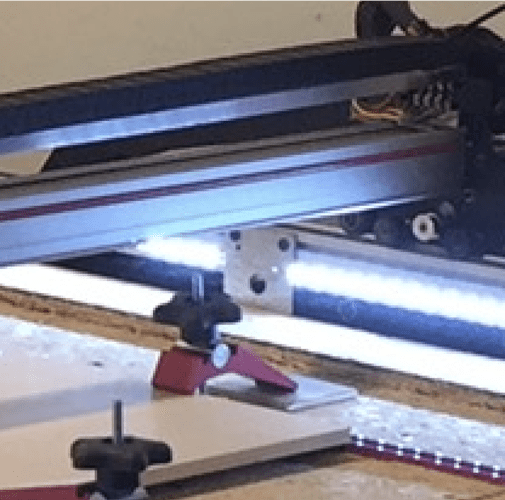 Cheap and simple. Once again- Suggestion not a method.

I’ll admit how this little project got started for me - I wanted some stiffening brackets and was too lazy to get myself to Home Depot, but have a 3D printer in the basement and I could do the CAD design using my laptop while watching TV on the couch. It’s possible that @PhilJohnson and I like to play with our CAD tools enough that we just doodle in them while we’re thinking, but then it’s just too easy to send the result to the 3D printer (which I’ve had for longer than my X-Carve).

At first I thought I was going to fasten the inside of the Y rail to the outside of the bed mounting rail and it seemed like work to find a piece of metal which would exactly fill the space, but once measured that was brainless to design in Fusion 360 and 3D print, and I also started to think that the rigidity of PLA would actually help in this case as long as I used a bunch of them to handle the strain.

PLA, better than, Nothing.

I still think the idea for 3D printing this bracket is a decent one, but wanted to share another insight:

but, because of the emerging tools the costs of our mistakes are dropping (so we can make a lot more of them with less resources).

Speakin’ for myself, you know.

What’s wrong with previous idea using ready made Y axis steel brackets. I have no problem with. Just need to cut the heads off. 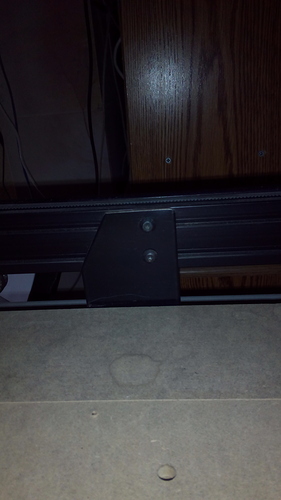 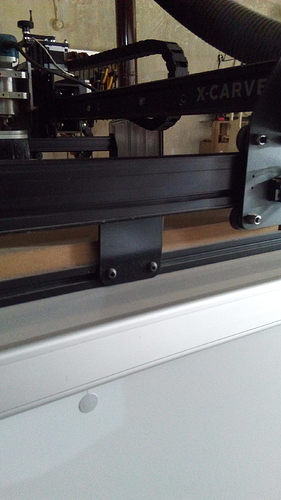 definitely shifting something because no item will be exactly the correct width to fill the gap.

^ This. And the gaps can vary in size as well. The gap on the right side of mine is 1mm less than the gap on the left side.

L bracket to the surface or an L bracket from the base extrusion to the underside of the rail that has a little play for the variance till its tightened down.

I’ve been playing around with some of the ideas discussed here and have come up with some changes. I’ve split things up into two designs. While I understand the desire to attach to the top of the waste board, for some reason I’m just not crazy about screwing the bracket into it, but there are two existing attachment points for the waste board on each side, so I’ve added a design which fits into those slots so a replacement longer bolt will hold the bracket down to the waste board while at the same time fastening it down to the bottom extrusion. So I’ll have two of these on each side. I’ll also have maybe 4 of the other style bracket on each side which will connect the Y rails to the countertop (with a pocket screw). 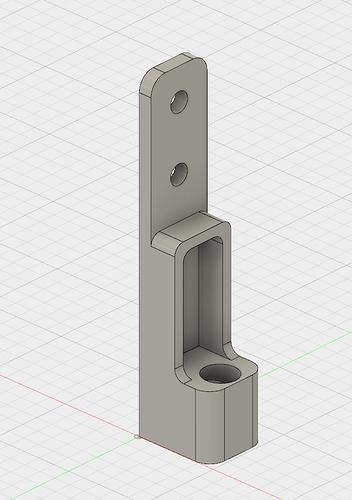 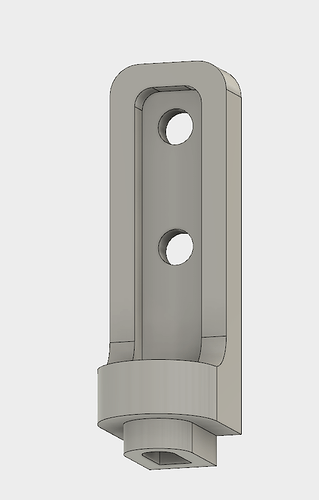 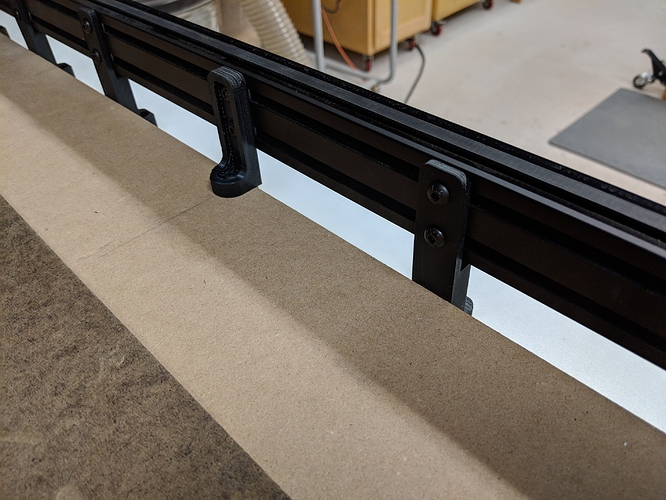 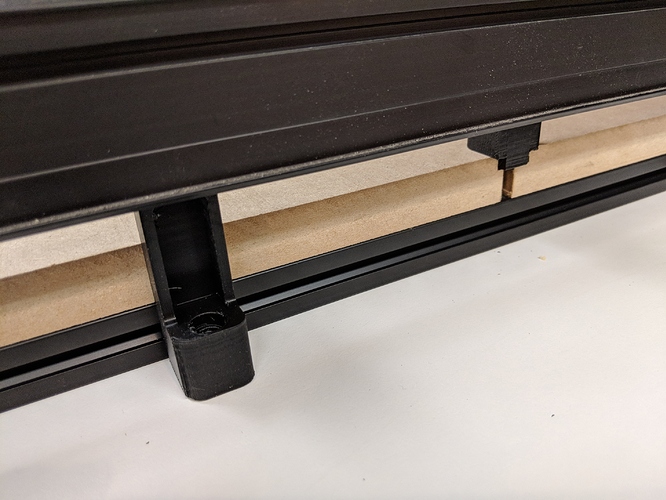 Yes, I did incorporate your suggestions into my original design. What came to me in the end was that I’d use a combination of the two types to get both benefits. So far I’ve finished two of the ones that fit into the waste board mounting slots as well as four of the other ones and they all seem to fit perfectly. I’ll try to get the other half done soon.