I spent yesterday evening measuring diagonals and trying to get everything squared up on my XCarve. Thought I had done pretty well, but this morning when I did a test cut I noticed that I still am having a problem with my horizontal cuts.

When cutting 500 mm from left to right, at the right end of the cut it is about 2 mm higher than at the beginning. This results in a shape that is just slightly less than square. Cuts in the Y-Axis seem to be perfectly straight and square to the table.

Could this be the result of belt tension mismatch? I’ve tried putting stops along the Y Axis slides and manually moving the carriage until it stops at both. I notice that the entire X-Axis slide wants to assume this slightly skewed orientation, with the left side hitting the stop before the right side does.

I’ve tried manually “unskewing” the X-Axis slides by turning the machine off and bringing the right side of the machine towards me a bit before the left side. The orientation will stay correct with the machine off - I can slide the carriage left and right along the X-Axis and keep the bit almost prefectly aligned with one of the wasteboard grid lines, but the orientation skews once I do a powered run.

Any advice on what to jiggle, nudge, adjust and observe to fix this?

Just found a very good doc from ShopBot that talks about “powered vs unpowered squareness” - http://www.shopbottools.com/ShopBotDocs/files/Squaring%20PRS%20gantry%20tools%202008%2009%2030.pdf. Interesting read. There’s a ton of other interesting docs on that site too.

I think I found the problem this morning, though not the cause or the solution yet. The left gantry plate is not square to the X-Axis maker slides when bolted together. Unsure why at the moment, but will be measuring maker slide lengths this evening and exploring the stiffening sandwich as a means of creating a monolithic and square-ended X-Axis.

I upped the current to the motors a week ago and believe that they are fine as-is.

No problem Roger. Glad you found it. I know the current issue stumped me at first so I was just checking.

Just FYI I had a squaring issue on my Z-axis. Check that too because it can cause stair stepping when doing multiple depth passes.

Yepp, Z-Axis is out of square too.

I had this problem some time ago and it was partially due to not having the frame squared plus the Makerslide was not cut square, Adjustments and some new Makerslide fixed that - or so I thought.

After recently getting the spoilboard level, I ran a quick test to see that the sizing was correct (number of steps). Spot on as well as I can measure it but the resulting grid pattern shows that what should be 90° angles, aren’t. Lines in the X direction are parallel but slope towareds the from as the cut moves to the right.
The left Y-axis plate is about 20mm further away from the Y-axis rail mount that the right hand Y-plate is. Double checked framw and it’s as square as I can make it (measured diagonals)
Measuring the angle between the left Y-axis plate and the Makerslide shows it’s less than 90°. Measuring the angle between the right Y-axis plate and the Makerslide shows it’s more than 90°.
First thought was that one of the Makerslides was short/long but that would result in a trapazoid shape but its a parallelogram.
To ensure that it wasn’t the frame causing the error, I’ve removed the Y-axis plates and the X-axis Makerslide and as far as I’m able to measure it. both X-axis Makerslides are the same lenght and the cut
at each end is square. No measurable twist in the Y-axis plates.
I’m at a bit of a loss as to explain this so I’m looking for ideas.

Hope this isn’t hijacking the thread

Not hijacking at all, sounds like a similar issue. Question for you, have you tried clamping the slides together with a spacer in the middle and then reattaching them to the gantry plates? I’m in the process of doing that now.

Also, have you verified that the slides are still out of square to the end plates?

Are your y axis slides parallel to each other? If they were pinched, even just very slightly, maybe it would cause what we’re seeing?

I’m going to keep measuring and aligning, but at some point I’m going to look at adding material to build in awareness. Not sure how yet, but I’m going to have a look at the Shopbot docs for ideas.

I haven’t tried clamping them, sounds like a plan.
I did removed the X-axis makerslide and swap them over front to back, but no difference.
I made a jig from some spare makerslide to measure the Y-axis rails and they are parallel.
The real test is a diagonal measurement as even with the y-axis rails parallel, one could be further forward than the other if the 20x20 extrusion is not at 90° to the y-axis rails.
I’ll get back to this later after I’ve had my overdue, daily walk.

Started aligning from scratch.
Removed the (none standard) spoil board and loosened all of the 20x20 extrusion corner pieces.
Loosened the screws that hold the X-Carve frame to the torsion box table.
Used my jig* to ensure that the Y-axis makerslides were parallel.
Pulled and pushed the X-Carve frame untile the corner measurements were within 1mm.
Bolted the frame back to the table and tightened the 20x20 extrusion corner brackets.
Tested for square again and tested that the Y-axis rails were still parallel.
Final test, both ends of the X-axis gantry are within 2-3mm of the Y-axis rail mounts.
This didn’t take that long to do. Worst part was removing the 60 odd screws that hold the spoil board down.
Proper test tomorrow by cutting a few large squares and making sure that the corners are 90°.
I might just 3d print a pen holder and draw some squares instead, save a bit of plywood.

* jig is just a length of makerslide with some extrusion corner braces bolted to it. These can be slid along the makerslide until each contacts the Y-axis rails and then the screw are locked down.

SOLVED Did a test run this morning and the machine appears to be cutting square now. The 2 major changes I made were:

Made all my measurements and found that everything is exactly spot-on. The absolute biggest difference that I’ve noticed now is that with the Y-Axis belts disconnected, the gantry naturally tracks squarely across the table. You can still twist it across the X-axis if you try (I will address this in the future), but by itself it wants to be square. I believe this can be attributed to the gantry plates now having a larger, square surface to bolt to. As a result, I now feel that the stiffening mod is an absolute requirement for the 1000 mm XC.

The trimmed Makerslides are probably not 100% necessary, and you’ll create problems for yourself if you’re not extremely accurate in getting the lengths to match between them and the assembled 2 cm sub-frame. However, when cut properly, they seem to virtually ensure that the subframe comes out square.

Next step will be to trim the wasteboard down a bit so that it has room to move within the Y-axis end-plates. Since the machine is cutting square, my goal now is to align the wasteboard to the machine so that I can use a fence in the future to align stock to the Y-Axis of the XC.

That is a very good call. Thanks Phil, I will pay attention to that more closely when I reattach the wasteboard to the machine.

been having the same issue. how do i fix it?
waste-board and 20x20 extrusions are all too short in the y axis by 1/16 when the w-b is perfectly square.
the x end plates seem square to the x rails cuz they are brand new and i measured them to be exactly the same. however with the y plates disconnected from w-b and the gantry in the middle they relax to their natural position which means 39&7/16 in front and 39&3/4 in back… 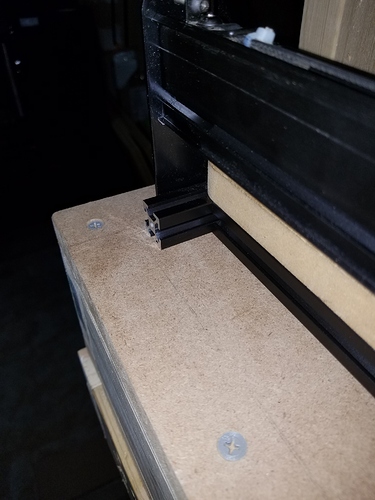 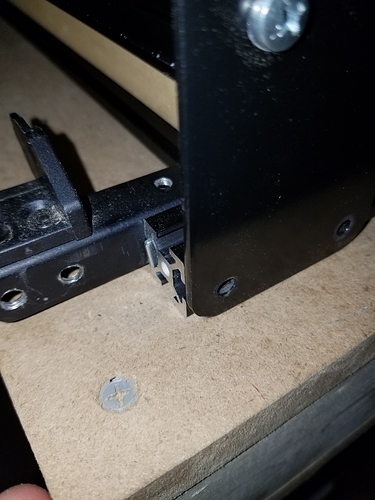 i went over it with a fine tooth comb. the base is all square. the wasteboard was slightly off so i shaved off the overhang with a ball bearing bit in my handheld router. what would cause the warp?

i have a 1.5’’ wasteboard bit and still not explaining the x and y cuts not being square…

I resolved the washboard effect. However when i place a square in the cutout its off. Like a paralellagram.

Follow Phil’s advice here.
I also had similar issues and went though the same sequence of steps as Phil outlined but it still was off.
In my case the partial solution was not to force the gantry to be an equal distance from the Y axis plates. I was still out a bit but that was fixed by removing some of the shims I’d fitted earlier to solve the original problem. It’s take a bit of time to get it just right but It’s now fixed. Still need to check the belts and v-wheels regularly though
You just have to persevere.

I think my X-Carve is actually a parallelogram rather than a square. This should be OK as long as the Y rails are parallel and the X carriage is at 90 degrees to the Y rails. I might lose a few mms of Y travel but not enough to worry about… I’m sure I could correct this but that would mean a complete disassembly and I’m just too lazy…

So I am having the problem, too. The biggest issue I have is nothing is fixing it. I think it’s a defect in the Maker Rail. Here’s the youtube video:

The Maker Rail and Axis plate don’t appear to be square with each-other. I have literally tried everything. Everything is square to each other but the right side still physically will not move in without the left side plate flexing. I tried evening them out, turning the X-carve on and then letting the motors hold it there but the minute I move the gantry to prep for a carve it slips back on the right. When I move them all the way to the back (with the power off, of course) the right side hits first.

Everything appears to be on the maker rail. The rails are square to the waste board and equidistant to the wast board and each other at both ends. I’ve used a story stick method to make sure it is square… again, everything is.

I have a request in to their tech support. She said she is going to have to get with the engineers to see what the problem is. I’m guessing manufacturing defect but I’ll wait and see.