So I finally got around to wiring up the X-Controller so I took the time to fix the saggy drag chain with the cable tie fix, took all the eccentric nuts off and turned the screws around adding a lock nut so I don’t loose another wheel mid-carve as well as some other cleanup.

However I still am running into the same issue I’ve had since day one. The X-Axis seems to have sticking spots when you slide it across. This is the same with or without the belt in use, however without belts its kinda like a bumpy road - Described here pre-stiffing mod but post mod still shows the issue so that was not it. If I adjust the V-Wheels as I have read around here - just slightly tight enough that they do not spin freely - then move the X-Carriage it sticks every few inches at the same exact intervals. Loosing the V-Wheels allows me to move the X-Carriage freely but the wheels don’t move at all but the bottom V-Wheels hardly touch, tho I have noticed it so it might be if the V-Wheels are in a certain rotation and hit a certain spot on the rails they stick. I saw yesterday in another thread a link to Amazon for V-Wheel replacements, but don’t want to spend $86 if it could be the Carriage or Rails. The X-Carriage seems to have been dropped before shipping as it had some dings it in but figured it would still be alright.

I contacted support about this when I was building the machine and they sent two V-Wheels out of the 8 on the X-Carriage. I randomly selected two and didn’t notice any change as the ‘sticky’ spots were still there.

Has anyone else had this issue? Should I be concerned? When using the stock controller I had to turn up the current on the X-Axis to get it to move smoothly but you could hear the spots it was having trouble with. I then left them loose where the bottom wheels were not touching but you can feel there is some front to back movement if you gently lift on the spindle.

if you have a steel plate mod in the x axis check to see if the fastener heads are rubbing. Mine were and i had to touch them up with a dremel

I do have that mod, I’ll try to get out there this evening and check that out. I however noticed this before doing the X-Axis mod, I was really hoping that the mod would have resolved it thinking maybe the two rails were moving causing the issue.

Took a look and everything is clear of the fastener heads as well as all the screws. 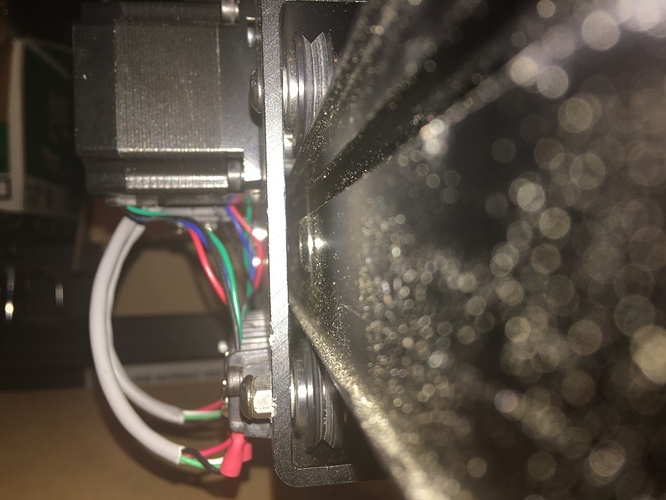 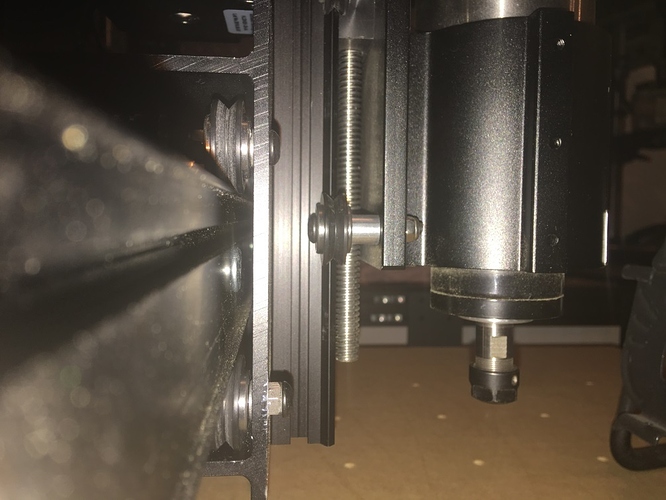 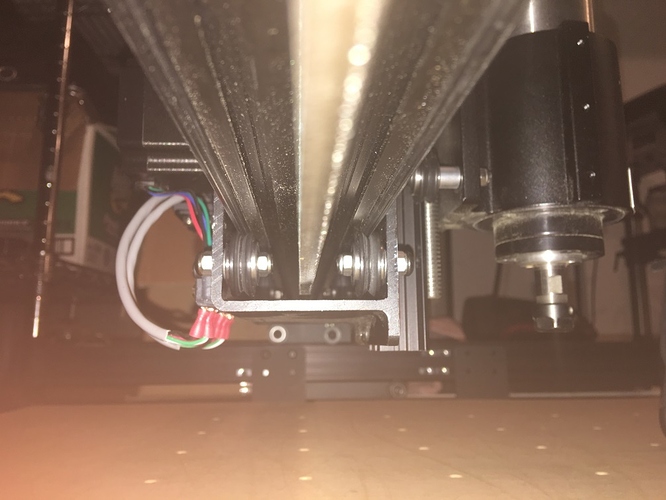 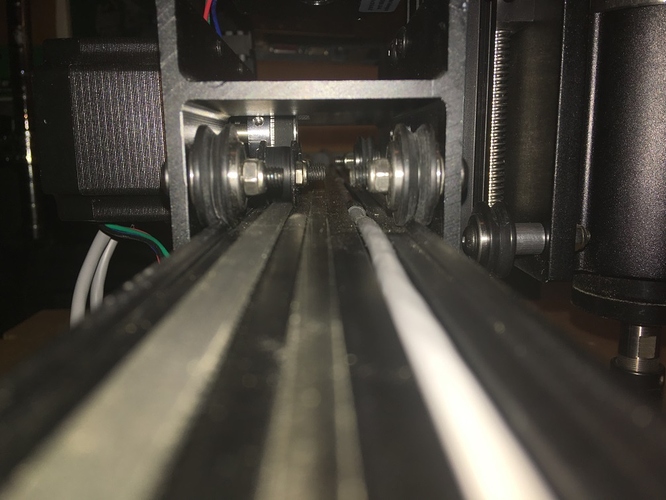 I am at a loss. The only other suggestion i have would be to place a light on the back side and use a machinist ruler on the peak of the rail and look for gaps.

It sounds like a flat spot on a wheel.

Here’s a way to test:
As you move the spindle across the X axis, when you feel it stick, make a pencil mark on the front of the rail.
Then jog the machine back, and use your fingers to spin the V wheels a little bit. Then move the spindle again.
If the spots move, you’ve got flats on your v-wheels.

If the sticky spots still line up with your pencil marks, try doing the same thing but spinning the belt idlers instead of the v-wheels.

If after all of that the sticky spots still line up with the pencil marks, you have flat spots on the rail. Try taking it apart and flipping the rail over. Run the pencil line test again.

The only think I can think of is maybe you have a bad v wheel? I know that some of the VWheel kits had defective spacer washers. People got replacement washers from their local hardware stores to fix the issue. it might be worth looking into.

I have the fiber washers ready to give them a try. I thought tho that you could move the wheel back and forth on the bearings? I have no give on the bearings so didn’t replace them yet. That might be next up on the list since I have them, just going to take a bit of time to take everything apart again.

I’ll have to give this a try this weekend. I tried to prove something close to this when I first noticed it by moving each wheel a bit to see if the area of resistance changed any but don’t recall what the result was anymore.

If you spin the wheel in place and can feel it tighten and looses then you probably have a bad wheel?

The back four sets seem okay, but I am going to have to loosen the bottom ones slightly to make sure. Now the front four do loosen and tighten. Both top and bottom on each side of the front. I however only have the two I pulled off, so I guess this weekend I will swap out the two on one side and see if it fixes it.

I had this problem and it was a dirty wheel. Over time gunk got ground into the wheel. I do a lot of plastic which I think contributed to this. I took them off and gave them a good cleaning in addition to the maker slide and all was fine again.

Wish I could fix it that easily. The machine has hardly any hours on it and after each I have been using a toothbrush to clean the wheels. This issue tho has been there since the start. I am more likely thinking I got 6-8 imperfect wheels. I’ll have to check Amazon/eBay and see if I can buy just the wheel since the bearings should be reusable. Might swap the wheels around and hopefully the problem will move ruling out the x-carriage or rails first before I spend anymore.

This issue tho has been there since the start. I am more likely thinking I got 6-8 imperfect wheels.

Contact support. I did get one bad wheel and they quickly sent me a new one. I’m sure they will take care of you if the wheels are bad.

Support has been great, they sent me two replacements when I was building the machine and noticed the issue, However after replacing two of the 8 I still have the problem. Not sure I am convinced what exactly is wrong yet. Was trying to see first if anyone had any suggestions on how to narrow it down. At least one suggestion allowed me to narrow it down to being the front four. I hadn’t contacted them again as I was going to first see about maybe a different type that would be more on spec.

I plan this weekend to take it all apart yet again and see if I can narrow it down to a specific wheel or such.

I plan this weekend to take it all apart yet again and see if I can narrow it down to a specific wheel or such.

Did you determine if the problem always happens on the same spot on the maker slide? Or does it move if you manually spin your wheels a bit? Also, make sure you do not have the tension on the vwheels to tight. If you can not manually spin them, they are too tight.

You can purchase just the wheels I believe they are called “Delrin V Wheels”?
Do not be tempted to get the metal wheels as they will cause the softer rails to wear.
I will get you some links

I narrowed it down to all four front wheels as you turn them in place will be free wheeling then get tight in one spot. So sounds like the wheels are all bad or off spec on those. Going to swap two out this weekend with the two I took off before to see if that fixes it to see how many wheels I need to replace. I am hoping this rules out the carriage or rails being bad.

So I noticed something today while working on trying to figure out the problem. I went to swap out the new wheels to figure out what was bad and when I opened them to install the new fiber washers I found they are different. 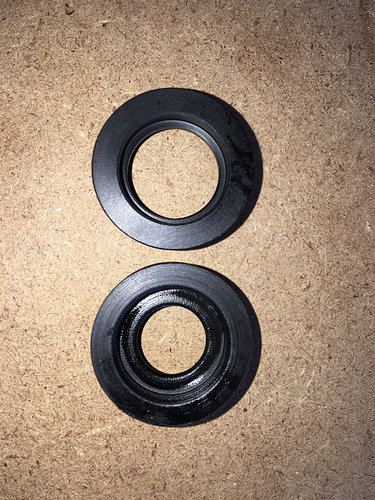 The bottom is the original ones received in the kit, the top is one of the two replacements I received later. They seem to be much better the V seems to be sharp and clean. I put the two together and noticed the one on the bottom is a bit more oval than round, but just very slightly.

I also noted on original ones they do not roll smooth. The video does not really do justice in showing the full motion (Up/down and left/right movement) but you can see movement.

Anyway I have it at a point its much better than it was, I found one bearing that was not working and took the two worse wheels out. The two new ones keep the exact same resistance all the way across, the remaining six still vary. I just ended up leaving them loose so they don’t case sticking spots.