Yet another list of mods for the X-Carve. A big thanks to this forum for the inspiration.

I like the idea of an IEC connector on the Makita. Might look at that one tomorrow…

Some good info here, as I am bout to put mine together and there’s a couple mods I haven’t thought of that I’ll be adding for sure.

I’m happy to finally see someone replace the x-axis with a single piece extrusion. Let us know how it does for the stiffness of the machine. Everything looks great!

A lot of interesting things to consider here.

You should kit this up and sell it. These are a great set of mods.

installed molex connectors on the motors

What is the name of that wire mesh?

I did the molex thing for a while and ended up pulling everything out and rewiring it. Molex is great if you think you’re ever going to port the machine somewhere else, or disassemble it reasonably often. But if you plan on building the machine and leaving it there permanently, I’d recommend as straight a wiring path as possible with as few junctions, terminals, connectors and deviations as you can get away with. Each one is a potential failure point and can have you chasing electrical gremlins for days and having weird carving failures.

@ErwinRied, the motor cables are dressed with expandable sleeving.

@Mike, totally agree. I was originally planning to solder the motor cables directly to the extension cables. But then I preferred the flexibility of having an easy way of disconnecting the motors for maintenance and upgrade purposes.

What size are the socket head cap screws for the pulleys? I love that idea.

expanded the X-axis slots on the Y side plates
May I ask how you did that?

I did this manually on a routing table with a 1/8" carbide bit.

Since the slot height is 5.1mm, you will need to adjust the fence four times in order for your bit to align with the:

I went conservatively with 2 passes for each cut (first half depth, then full depth) and I fixed a stop on the fence to prevent going further than 3mm.

As long as you have a good grip of the plate it is not as hard as it may seem initially. And of course be extra careful of how and where you use your hands around an exposed spinning router bit.

What I would add to this process if I had to do this again would be adding a second parallel guide to constrain the movement of the plate to the cutting axis.

@RonRange
Since I went straight for this stiffening mod without having tried the other method, I cannot really compare the two. My feeling is that both the single extrusion and the “steel sandwich” offer similar results and are a significant upgrade (especially for the 1000mm model).

The “steel sandwich” is easier and faster. I just went for the single extrusion cause -like most people in this forum- I like to problem solve …and cause I’m OCD and think it’s neater

@PhilJohnson
The eccentric nut was first on my list for replacement. This seems to be one of the most overlooked issues: trying to achieve two adjustments (positioning and tightening) with a single rotation. Even if you assume a big sweet spot of 10deg for each adjustment, you have 30/360 chances that the two sweet spots will overlap and 330/360 that they will not (this is better drawn than described). Decoupling the two adjustments is pretty straight forward. Your only “trouble” is to look for some longer screws to accommodate for the extra length of the two parts (spacer and nut).

I like the x axis mod and ant to do it but where did you get the side plates and everything ?

Disclaimer: Replacing the X axis is a 3 part job. Item (1) is a prerequisite and can be potentially hazardous. Item (3) is optional. This is the only mod on the list that modifies an original part (the side plates). If you are not confident doing this or don’t want to risk damaging your side plates or loosing a finger or being hit by a flying broken bit, either (a) STOP here or (b) try asking a local machinist or © carve your own side plates. Be alert, be safe.

Now that we are done with the scary part, here’s what you need:

(1)
I used the stock side plates and expanded the slots with manual routing (see 6 posts above for details).

(3)
In case you also use eccentric spacers & lock nuts instead of eccentric nuts, you will need 4x longer screws for the four bottom V-wheels of the X axis carriage. The stock ones are 25mm. The replacement ones should be somewhere between 30mm and 40mm. I will check when I get home.

What was the reason for expanding the holes 3mm on the plates?

The stock hole-to-slot distance on the side plates is designed in order to place the two individual X axis Makerslides with a gap in between.

This gap is what might cause flexing under load and is the reason to consider upgrading/stiffening. If you try to replace the two Makerslides with a single 40mm wide extrusion, the holes on the single extrusion will not clear the slots of the side plates any more.

Also the rail-to-rail distance changes and this is why new (3mm) spacers are needed in place of the original (1mm) shims. Here’s another visual: 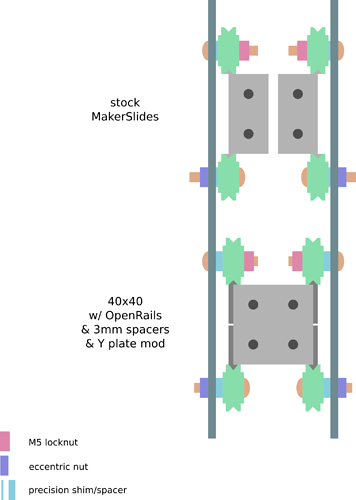 In the diagram above I have not replaced the eccentric nuts with eccentric spacers & lock nuts, so that it only reflects the x-axis mod.

UPDATE:
Here’s a crop of the side plate drawing with the 40x40 extrusion superimposed. After aligning the first pair of holes part of the second pair is hidden under the slots. 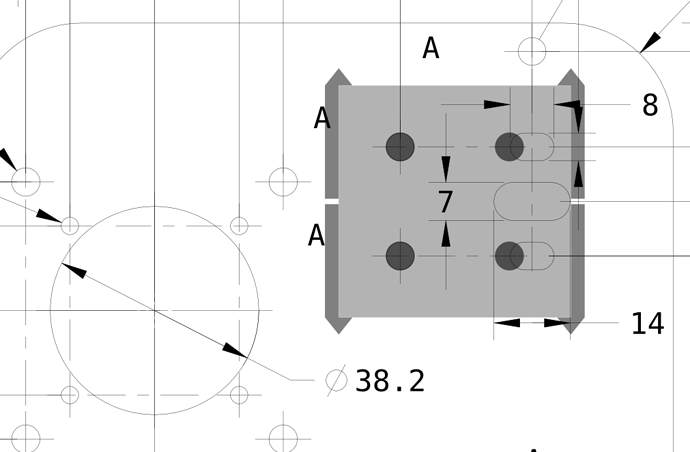