I carefully Took a heat gun to the end of the tube and stretched it over the 1/4" fitting for the radiator. Took a while but it worked, no leaks.

I cheated and put a 1/4 to 3/8 barb connection in my lines out of the way and have had no issues at all.

@Travelphotog, @ChrisWundram, @DavidDaus, I believe you guys all bought spindle / VFDs from China correct? Do you still feel this is the best way to go / the only way to go/ and would you recommend going down this path? I am ready to pull the trigger on this upgrade.
Thank you,
Keith

From what i have seen the spindle/vfd is probably the best system to use on the X-Carve, myself I am waiting until Inventables has one sourced that will work on 110v. I would go with a 220v system but I am not ready to run a dedicated 220 line to my shop area.

Many folks have been using trim routers with good results but I do not want to put up with the added noise and additional weight to the Z axis.

I bought from these guys http://www.automationtechnologiesinc.com/products-page/cnc-spindle and got it within 3 days, they even called me to make SURE I wanted the 220V version as they sell both for the same costs. So far it has been a great system and I am very glad I went with it over a no name China seller on Ebay. It does costs more than a Dewalt spindle but also allows me to adjust speeds on the spindle which the Dewalt of course does not. As I also mill plastics and other fun things I needed the speed controller above all else for me needs. I went water cooled to stop all the dust from being blow all over the place as I mill indoors in one of our spare rooms.

I went with a water cooled 0.8kW German 4 Bearing 220V version from China. It should be here Thur as I was dragging my feet on it until the 611 mount was released just incase something happened. Interestingly it shipped from Baldwin Park, CA rather than China so don’t need to worry about any import taxes. Picked up most the supplies to run 220 out to my garage when I bought a 1.5kW version early on so just stayed with the 220 0.8kW version.

Excellent, thank you for the information.

I’m having some issues with the inverter though. I need to review the settings, but right now it runs fine at below 400 Hz (like say 350), but once I bump the speed up to 400, the amperage goes from about .3 Amp to about 8 Amp, and trips the over current protection.

Also, I have the leaking coolant issue to figure out, which is keeping me from turning the motor on at all for now.

I think the VFD is a good solution, but you have to be the kind of person who likes to do problem solving. Its not straight forward like the default 24V spindle. Also, working with high voltage takes some extra care.

Yeah!!! I now appear to have coolant running with no leaks. I’m using a latex tubing instead of tygone. It is only translucent, not clear, so it is more difficult to see if the coolant is running properly. I’m thinking of adding some dye to the coolant. (I’m using propylene glycol right now) Anyway the latex seems to compress much better in the motor fitting without tearing or breaking. I tried tightening the connector and then taking it apart again, and the tubing end appears undamaged. A down side is the tubing kinks pretty easily. I’m thinking of putting it in a plastic flex conduit or something. I think it is too soft for a cable chain.

Now I’m going to let the pump run for an hour and see if it runs into any problems. 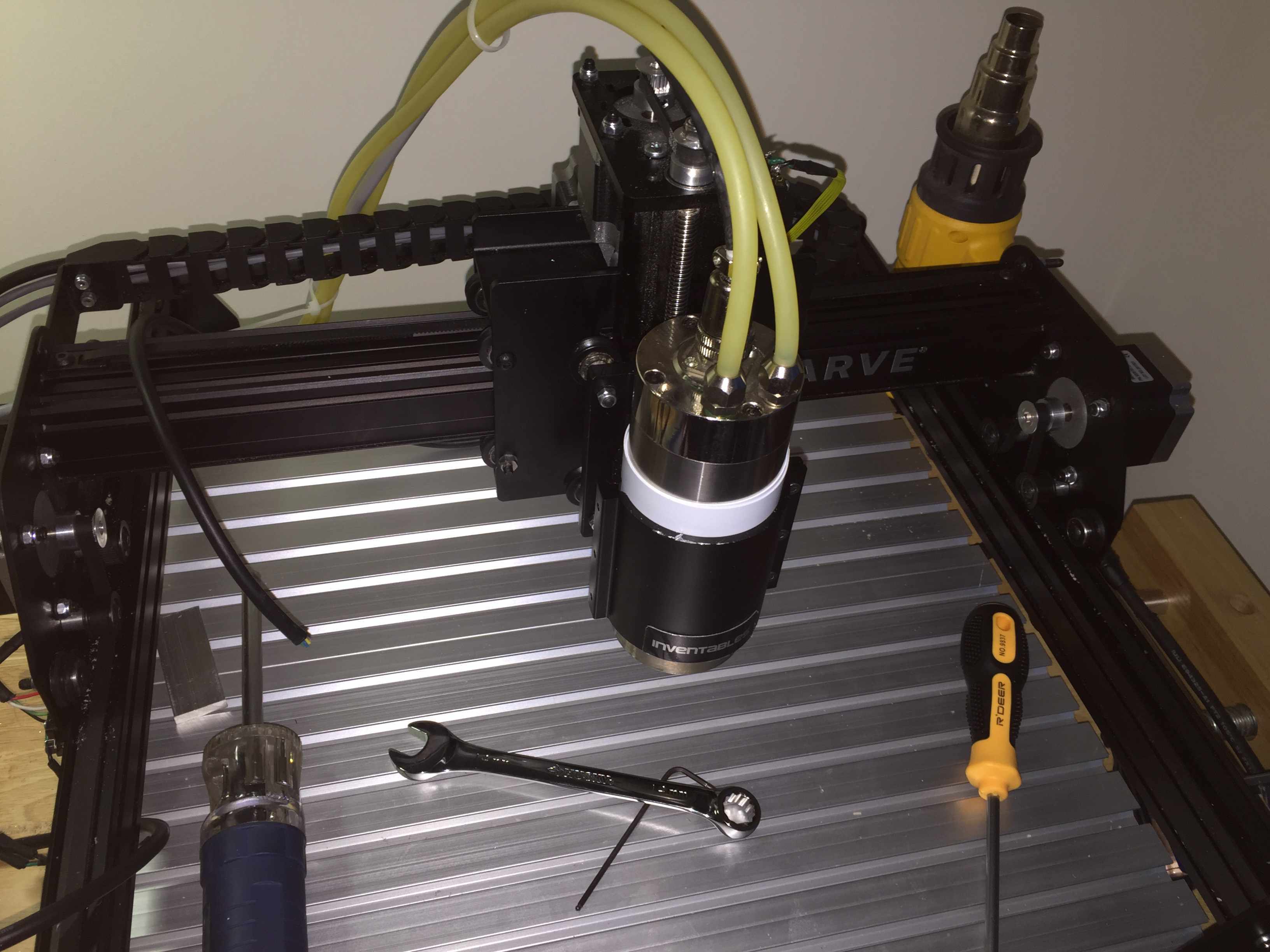 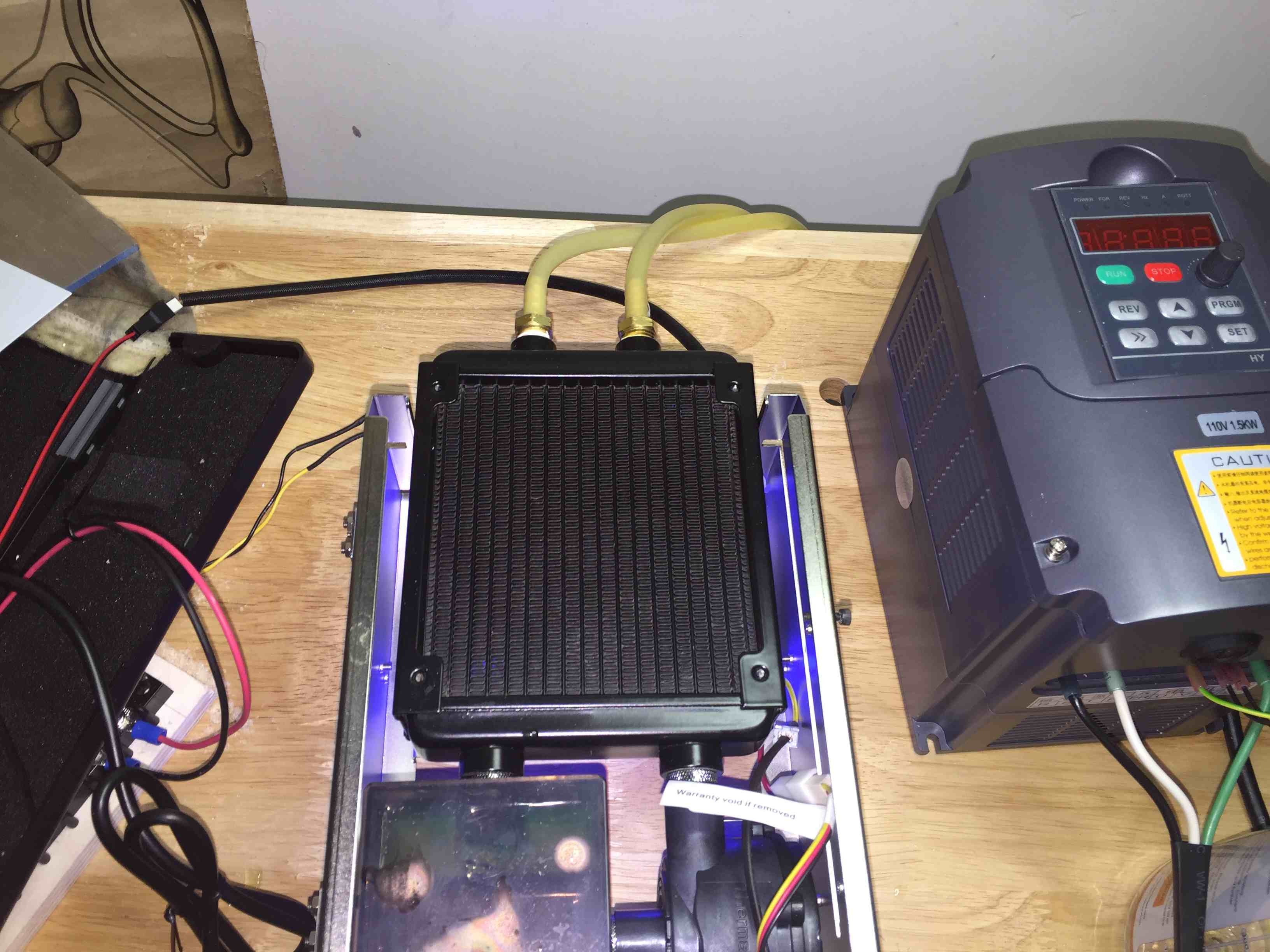 @ChrisWundram Looks great! What did you use to shim the spindle? Thats the one last thing I need to source. I asked in another thread but its been a few days without reply.

@ChrisWundram Looks great! What did you use to shim the spindle? Thats the one last thing I need to source. I asked in another thread but its been a few days without reply.

its white styrene sheet. I bought a few thicknesses (from ,010 to .030), and tried them until I found a combination that worked. I think I ended up using two .030" sheets stacked. Thicker sheets don’t bend very well, so a stack of two seems better than one .060" sheet. I cut them down to size to so they almost wrap around the motor, and have a bit sticking above and below the mount. Then I lined up the gap in the sheets with the gap in the mount (where the screws for tightening are).

I just bought them at the local Blick store, but it looks like you can get them online here

Hi @ChrisWundram,
A few questions on your setup if you don’t mind. I have the same VFD and as the directions don’t seem to address the 110 volt version your working system is the best place for me to look.
It looks like you put your input A/C to terminals R, T and E, can you please confirm this? Also for the spindle itself, U, V and W are self explanatory, but for the forth wire did you wire it to E as well? Lastly did you just solder the wires onto the connector that goes into the spindle itself?
Thanks for your help,
Keith

@Travelphotog would you happen to know the answer to these? You seem quite knowledgeable on the matter

Hey Guys,
Sorry I was out of town on an assignment and unable to check the boards while gone. I did solder my connections to the GX20 connector directly. You will want to place a small section of heat shrink tubing on the wires you are connecting and make sure they do not shrink while you connect them. Then once you are done you heat shrink all the tubing over each connector. This will make sure you have no shorts. I also placed a larger section of heat shrink which i pulled down on the smaller four and shrank to give a bit more protection to the bundle of wires. I followed the direction I had which had me connect my 220 to the R, S and T then I ran a ground to the E from my 110 circuit for grounding. I then hooked the motor up to the U,V,W and then also to the E for grounding

Thank you for the response, I will follow your directions for connecting the spindle and I will email the vendor to verify the 110 volt connection. I would hate go get it wrong and fry it off the bat.
Thanks,
Keith

In case anyone else runs into this the information for connecting 110 volt to the VFD I got from the vendor was:

to this the information for connecting 110 volt to the VFD I got from the vendor was:

you can connect to R.S an

I used a three conductor shielded cable from the VFD to the motor, so I only needed to connect the three phases to UVW. I left one pin on the motor connector unconnected. All the pins that you wire should have a few ohms between them, the fourth pin to leave unwired has no connectivity. When I soldered the wires to the pins inside the connector, I left a bit too much wire before the outer insulation and shielding started, so I had to sort of spiral/twist the wires inside the connector shield. So you might want to double check that.

A couple of things I found. One is to make sure the voltage in the settings is set to 110. If it is set to 220, the VFD will shut down with a fault after a short amount of time. Also, on my unit, if I press the start button right after powering the VFD, it will read a much higher current than is actually there (like 10 Amps instead of .1 Amps) and shut down with an over current fault. If I let the VFD warm up a minute or two before starting, it works fine. It also took me a while to find the settings to let me use the front panel rheostat for speed control. I can probably make a list of my settings and post them tonight.

Thanks @ChrisWundram, appreciate the feedback. I will post more info once I get it all installed and working. All that is left now is finding the shim material similar to what you used.