Yes. One of things I love about the Planet CNC controller is built in tool length measurements and offset measurement.

My build so far.
Next up is cleaning up the wiring and installing them underneath the x carve.
Then it’s ready to go to my workshop. 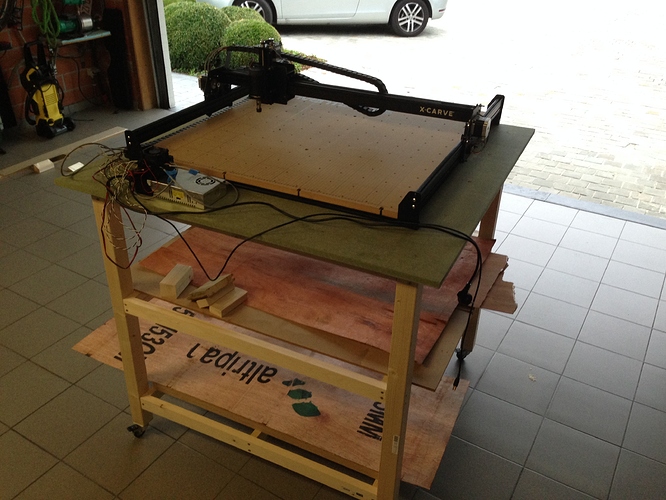 Fantastic, looking perfect. But your Garage floor is looking better.

(Go ahead and replace your Stock spindle with more decent one, before start pulling your hair)

Could you recommend a better one?

First choice is VFD air or water cooled spinner, second choice is most of us very happy with is Dewalt 611.

These threads cover the Dewalt 611

All hail the dewalt gods Upgrades

omg guys. I know its been a while since I have posted. I have been working on 2x 8foot by 4foot signs for a local restaurant. In the process I have gone through 4 yes I said 4 quiet cut spindles. ALL FAILED. Honestly this is no fault of inventables since their customer service was more than stellar. Sam got me hooked up every time quick easy I WANT TO SAY THANKS. Anyways after this last spindle failed and screwed up everything I had been working on I said F it Lets do this right and get …

What will be required to use the larger DeWalt DWP611 with the 1000mm option on the X-Carve? Spindle mount only or does the machine need to be stiffened up? Larger Nema23 motors? Rick

so i built a workshop for my X-Carve LOL i will be bringing her home thisafternoon! 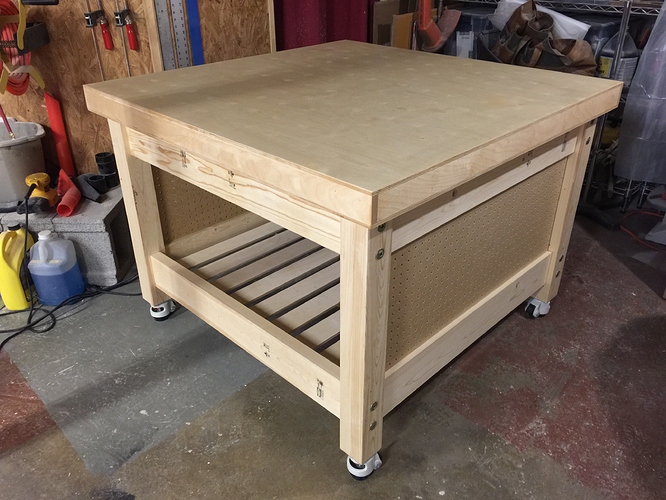 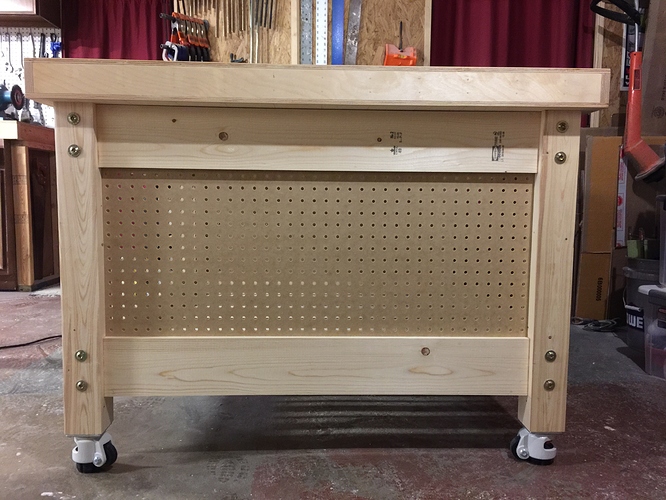 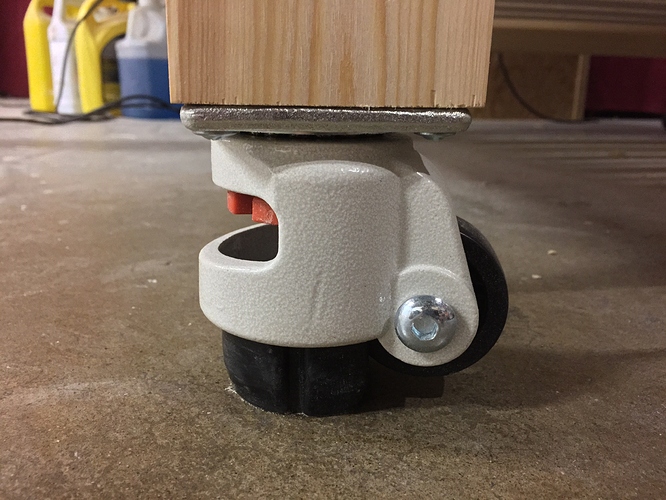 I have been looking at allot of great workstations, I just thought I would throw mine into the mix. I wish I would have seen those folding designs before I started to build my table. My table is nothing special, just built like a tank. Torsion box top, peg board on the side for organizing stuff, storage underneath for various components and supply’s. The really cool thing is the casters. Each caster has a leveling foot, making it a breeze to level out the table on a really not so level floor. As for controlling the X-carve, my plan is to wirelessly control my computer with my iPad using the splashtop app, the computer (in another room) wood be hard wired with a usb ethernet extender to the machine. I’ll mainly be using easel for now.

Actually those corner posts are made of two 2x4’s glued together, then cut and planed down to 3"x3" actual. The casters are woodriver leveling casters, I found them on Amazon from caster connection. I was very excited to find them, my house was built in the 1940’s and the basement floors all sloop to the drains in the floor. I have another set of these on a work bench really like how solid they are. Highly recomend them!

Awesome, I might need to rebuild mine soon (and steal some of your design!). I really like how clean and simple it is! Mine got put together in a bit of a rush, it works but I’m not entirely happy with it. Is your torsion top made with 1/2" top and bottom and 3/4" vertical?

The torsion box has a ⅜" skins top and bottom. The outside edge of the box is ¾", and the inside ribs are ⅜". I did 3/8" because I have a 3/8" box jiont table saw blade. With that blade and a jig I made that allowed me to cut evenly spaced slots at 3-3/4" o.c. The inside peices are half lapped together, then filled with expanding foam. After the foam cured I sliced it flush with the top. I felt the foam might dampen some of the transferred noise that the machine might give off. I didn’t what the torsion box acting like a drum. Everything was assembled with glue and brad nails. I am very pleased with the results, very solid and flat. 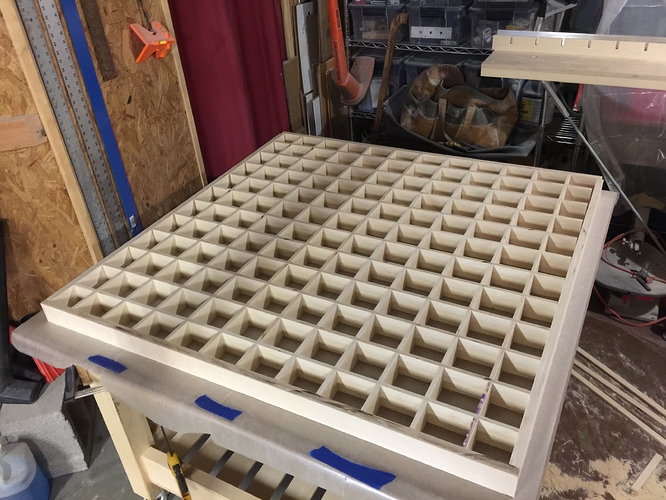 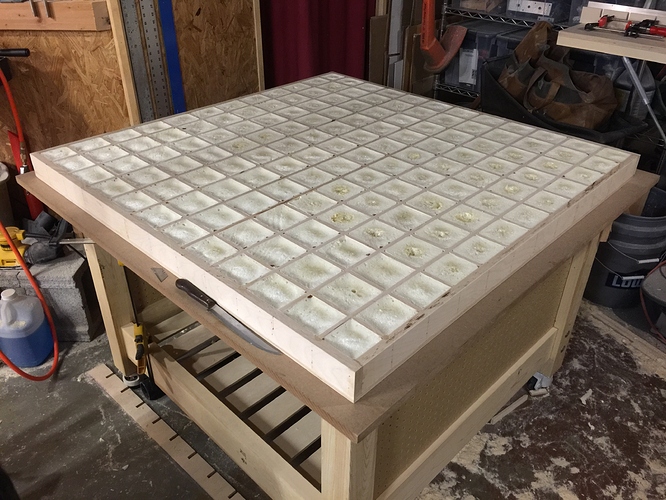 That is some table top! Very nice. I would have been tempted to fill the inside with concrete.

Dang, that is one hella good-looking table! Going to be solid as a rock.

This is the jig setup I used with the 3/8" box-joint blade to cut the slots. 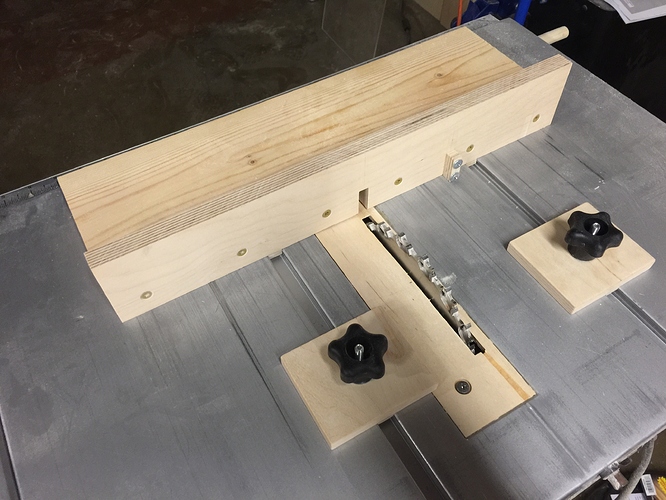 Rusty, it’s only saskatchatoon where you can’t find in-treated 4x4… Lol. Here on Vancouver Island they sell it at 7/11 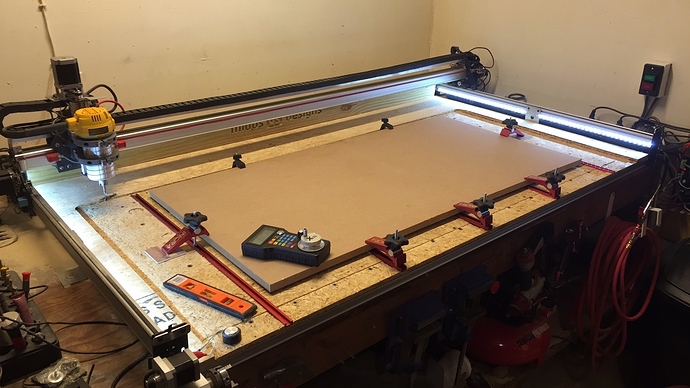 It’s not as pretty as the others that have posted here, But it gets the job done.

After several iterations, and lots of headaches, I’ve gotten my workspace to a place where I’m happy with it. 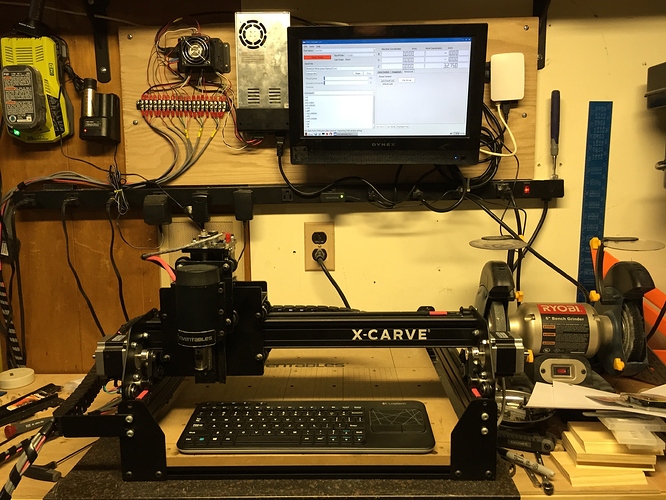 It’s not as pretty or as dedicated as some of the other ones I see here, which I’m blown away by, but it’s functional (finally!) and I’m really going to enjoy using it.

• Resin countertop baseplate for the X-Carve is super dense and SUPER flat. This will help keep the bed true, though I may have to screw it down as it’s also very smooth and slippery.

• Detached the microcontroller from the power supply and wired the steppers, homing switches and spindle power into a terminal block.

• Added a couple of Molex connectors (not pictured) to the wiring loom. This was a large headache to do and there are a couple of loose connections so I’d like to re do it. I bought a 12pin and two 6s but I really should have held out and bought a 20 or 24. Crimping the terminal ends is a pain even with the crimper tool. It’s important to get extras. But the convenience is worth it.

• Monitor is on a tilt-swivel wall plate I bought from MicroCenter for like $5.

• I’m running GrblController as a Gcode sender on a Raspberry Pi with a wireless keyboard. I still use Easel to generate the Gcode but that’s on my computer in another room, so I don’t get it all manky and full of sawdust.

I had to troubleshoot the wiring because when I set up the grbl shield I soldered 2 sets of header pins to it, which at the time wasn’t a big deal but when I rotated the unit it caused me to put the limit/logic connector on the wrong set by mistake, and caused all sorts of problems. First I blew out a Z switch in a failed homing attempt, then the shield wouldn’t communicate with the pi unless the connector was undone while opening the com port, then m3/m5 wouldn’t work to turn the spindle on and off. I double checked each connection with a multimeter, but it wasn’t until I checked against a photo of the shield that I realized it was on the wrong set of header pins.

What do those other 8 pins do anyway? Other than cause me problems of course

Next steps are to create some tool and bit storage, I’ll probably see if I can find or have made some MDF that’s the exact thickness of the void under my X-Carve just for added stiffness and flatness. 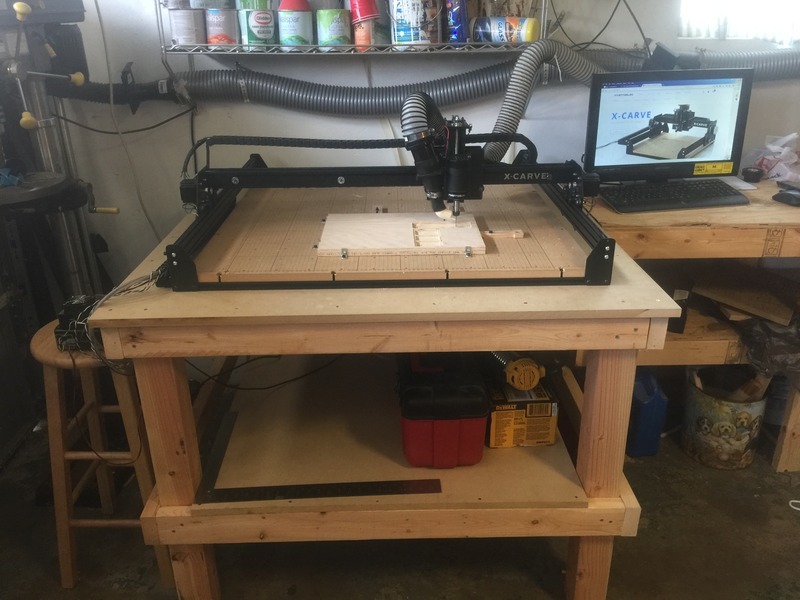