I’m creating a new topic for 2020 continuing the previous discussions for folks new to X-Carve and the forum.

Introducing the X-Pendant. This a custom keyboard pendant for controlling a GRBL based CNC machine through popular controlling software. The pendant can control the jogging, probing, and zeroing as...

Continuing my adventure for an X-Carve Pendant. This is a very much overdue update to: Unfortunately the wireless circuit chip that I was using has been obsoleted and I couldn’t find one that worked as well as it did. Although I have used my wireless one for about a year and it has worked very well I wanted to simplify it, allow more flexibility, eliminate the lag and reduce the cost. Even though being wireless was a cool factor, I found that it actually didn’t add a huge amount of value si…

Fellow X-carvers, I'd like to share a project I've been working on for the past few weeks. I've used my share of simple interfaces including a USB numeric keyboard, wireless keyboard and USB Super Nintendo controller. Although they were simple, I felt it was too simple for what I wanted to be able to do. So I have created a wireless bluetooth pendant to perform the following features. Current: 1. Jog all 3 axis at 4 level increments (1in, .1in, 1mm, .1mm) 2. Run homing cycle and return to home…

Received my X-Pendant yesterday… WHY didn’t i get this thing sooner…???
It works right out of the box. I only had to change the Z-probe height value as I use the standard Inventables Z-probe. (thinking now that I need Charlie’s Triquetra Block)
I will likely use it mostly with UGCS Platform as I don’t do much with Easel and primarily design with Vectric software.
This is going to make things so much easier as I won’t have to rely on the keyboard when I’m manually jogging to the work piece.
THANKS SO MUCH to Jordan @MechanicalGoose 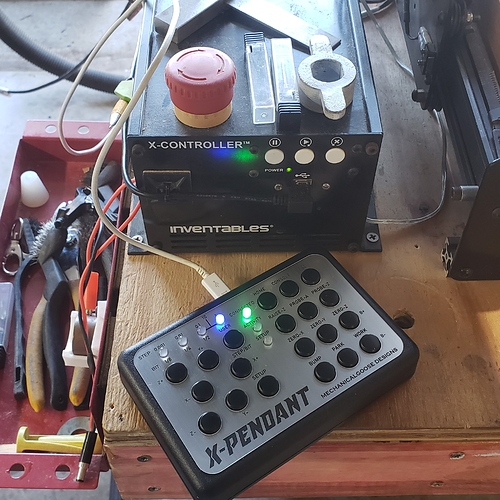