since the Y axis has two tracks and two motors, if they are offset it will put the x axis out of square.
This can mostly happen in the following cases
1- during the initial setup
2- if you move or bump into the gantry especially from one side while the step motors are not engaged (when machine is off). you can feel and hear that one side of gantry in y axis direction have slipped few teeth on the belt. this will cause the gantry to go of square of the y axis therefore throwing the x axis out of square.

I just home my machine before carving, do you have homing switches ?

Some people have identical blocks they put between the X axis and Y end plates and use those to square the X axis before powering on/homing.

That’s probably the best solution to fix the problem.

That’s why I asked if he had homing switches , I installed an identical endstop post “the screw and spacer that engages the limitbswitch” to the y1 stop on the y2 rail and is my machine is out of square once you home it pulls itself straight and holds it until u bump it out of square again

If you square the frame then it should retain the distances.
If I bump one side of my system I can move the gantry all the way home and let go and it will square itself back.
I would check for loose belts and V-Wheels.

That’s not true , my machine is square corner to corner and my gantry is like 2 teeth off when it’s powered down all my belt tension is spot on and can’t between belts , I think the problem is that the way the v wheels attatch with a 5 mm bolt if one of those bolts or multiple bolts aren’t by chance exactly straight it causes a deflection in the wheel and it causes one side to track different than the other , I squared my machine over and over when I stiffened the y rails it helped out a lot the , true fix was adding that secondary bump stop and homing the machine “which is good practice before any carve " tryed the machine up right now only after a week of running this new machine I’m accurate to .0500” on my cuts and circles . But when the machines not powered and u move the gantry by hand it goes out of true , I think it’s the eccentric spacers and the 5mm screws. That are the weak point in this machine they should be riding on some sort of hardened steel axles.

Thanks all,
I have limit switches , but homing does not solve this problem, my frame is 100% square, that is not the issue.
I will try to put physical end stops on both y rails for manual calibration.

That’s why I asked if he had homing switches , I installed an identical end stop post “the screw and spacer that engages the limit switch” to the y1 stop on the y2 rail and is my machine is out of square once you home it pulls itself straight and holds it until u bump it out of square again

That might work if your Y2 side is always forward of your Y1. But mine can be either forward or behind Y1 depending on which way it was bumped when the power was off. The only way I have been able to get a consistent true perpendicular carve line is to manually bring it to the dual stops before powering on. Then when power is added it locks in and stays where it should.

I will try it, it’s logical, I am convinced that this will work. Many Many thanks

I have just ran into this issue. I was thinking about doing the same thing that @RayMacke suggested but I’m going to 3d print some spacers to put on before I start the system. If the y2 axis is not tied to the y1 axis, installing another homing switch would be the best option.

Getting X-axis perpendicular to Y-axis X-Carve

How do you keep your X-axis perpendicular to your Y-Axis? When I manually the move the X-axis, I can move one side 1/4-1/8" without moving the other side, which leads to the X-axis not being at 90 degrees with the Y-axis. I discovered this while cutting a 24" square. The left/right sides were perfectly square with the machine, but the front/back were skewed (one side was 3/16" lower than the other). Do I just need to manually square the x-axis before turning the machine on? My friend sugge…

I had spare extrusions from not using the sideboard. 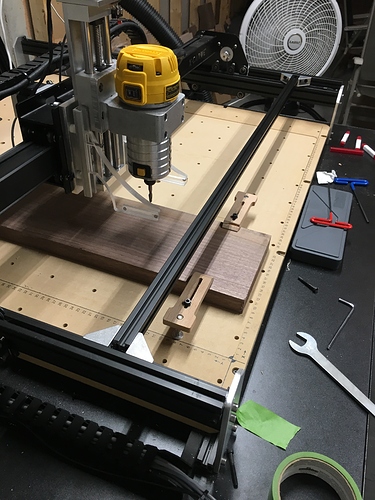 I made the cross piece to hold both sides up while I power it on then I remove it and set it aside. I can’t hold them up and turn it on so I made something to keep it. To me, it’s more about repeatability than accuracy.

How timely!,
I am following @PhilJohnson’s excellent instructions for creating dowel marking points to carve larger pieces. Phil could you go into detail or point me to your start up procedures? I spent some time Friday modifying our X-carve enclosure for larger pieces to pass through and noticed my 2 dowel holes were slightly off horizontally when I cut out both holes for the dowel in the wasteboard.

@JustinBusby Do you use the jig to align the y motors then zero out the machine?

Do you use the jig to align the y motors then zero out the machine?

Yes. That’s exactly what I do. Once I power on the Xcontroller, I remove the jig and then home the machine.

Yes @PhilJohnson,
Thanks for your input. I am going to work on realignment this week. Any tips on what to do or not to do?

I really appreciate your help.

Thanks @PhilJohnson!
I appreciate you pointing me in the right direction!!

I followed your (excellent) directions and have stopped midway. I squared the base and have been working on the upper assembly. I found a large flat area and reset all of the Y end plate screws. I moved onto the X axis endplates. I checked both sides for square and noticed that the right side endplate is out of square to the extrusion. I loosened the right side and slowly and carefully tightened all 4 bolts. The right side plate is still not square to the X-axis extrusion (upgraded to the one piece last year).

I am assuming I should not continue with the alignment process until I fix this.

Should I shim it? Am I missing something? Please advise.

I had to shim my original two piece x axis due to the same problem. I used some strips of thin plastic packaging and it stayed working like that for months until I replaced it with 40x40 extrusion and openrail.

I’m guessing that your X extrusion is not cut squarely on one end (that was my issue) as opposed to your right hand X plate bring bent or something?

Thanks! I will double check tomorrow!!

The plates are flat. I guess I am going to shim!!