During cut jobs after awhile the Y axis seems to not want to travel fully. My belts are tight but how tight is the right tightness to ensure the Y axis stays square? I’m burning through material and bits when the job binds and the bits cut at half thickness into the material.

The Y carriage moves smoothly most of the time but in the middle of the Y axis it seems to bind more often. I have a feeling my belts aren’t tight enough but I don’t want to break them by over tightening. Any tips on the correct amount of toughness?

I just had an idea about this. I know one way you are supposed to be able to check scroll saw blade tightness is by matching it to a tuned guitar note ( I can’t remember what note just now, but it is a thing). Well since the belts are supposed to be about as tight as a guitar string, I bet they make a particular note when tensioned correctly, probably much deeper, but distinct. If someone could publish that note, we could use one of the free smart phone apps to check this.

I don’t have a machine yet, so I’ll defer to those that do as to weather(sp) this is a practicle idea or not. I would guess it may be differant for the 500 vs. 1000 machine as well.

Well I can assure you mine are quite as tight as a guitar string. Maybe a bass guitar LOL

Can you replicate the issue by moving the machine with the arrows?

Some times. I re-square the Y axis by moving it all the way to the back of the carriage allowing the V wheels to hit the rear plate. Pressing on each side to ensure they are both touching. Then tighten the belts. Both belts seem tight but again not sure how tight is tight enough. Issue usually occurs in the middle of the carriage.

Check if the eccentric nuts are loose.

Negative. They seem tight however some of the top v wheels are. Bottom ones are snug top wheels spin freely. Nut is tight tho

There should be a friction fit on the rail so when the gantry moves the wheels turn. If the wheels are spinning freely it could be your problem.

Hmmm. Not sure how to make the top wheels tight if the bottom wheels are already tight.

I read somewhere to try and loosen all of the vwheels. When I’m back at my shop ill give that a go. Then tighten them all back and see if it makes any difference.

It might sound like a similar problem I had! My Y axis would kind of vibrate the first few times I moved it and then smooth out, and during a project I would loose steps throwing off my cuts!! I had also checked my belts and eccentric nuts and everything was good! It ended up that I needed to adjusted the Potentiometer current up just a hair and seemed to do the trick!

I agree with Thomas Gonzales. I had a problem where my y axis would move just fine when jogging the machine with Universal G code sender when set at 1 inch per movement. When I set it up to jog at more than 3 inches at a it would stall and growl. Sounded like a loose and skipping belt. Everything was nice and tight. I went to the potentiometer for the Y axis and gave it a very small adjustment clockwise and bingo. No more growling. Will jog smoothly at all speeds. Give it a shot, I’ll bet that fixes it for you.

Forgive my ignorance but is that the small dial on the g shield?

Yes, there are three, one for each axis.

what is the constant voltage that should be running through those wires? and i guess i’ll give it a one notch at a time adjustment till something different happens

It’s the white square/dial, just to the left of each axis’s label 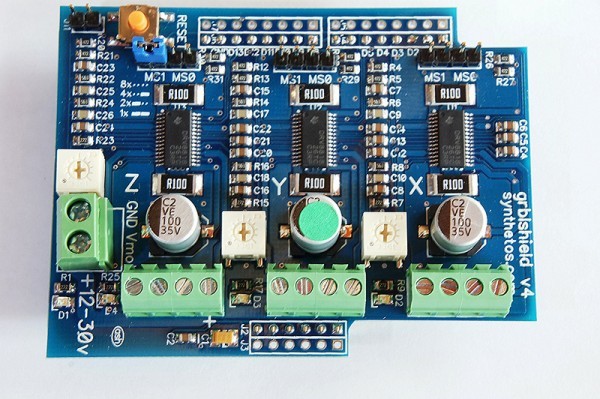 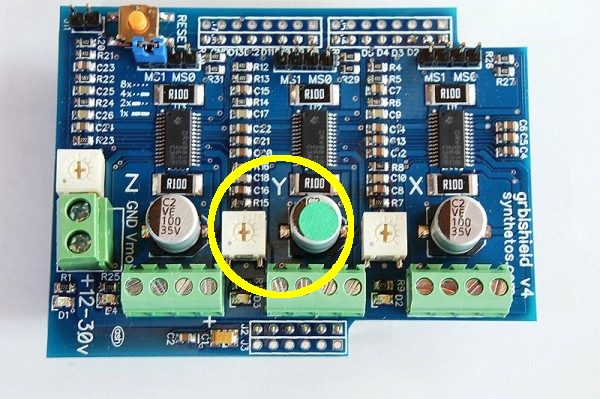 If its the Y axis thats giving you the problem then yes that would be the one to adjust! If its only an intermittent problem then I dont see having to adjust more than 1 notch!

I agree. One notch then test. I use UGS so i’ll set it to 10in or travel and move it around see what happens after the adjustment

I also had this issue and had to tune the pot to eliminate it. I also had an issue with the gshield not staying set in the arduino. There are several posts on this phenomenon as well. A bit of structure on top of the gshield and then securing the fan on the box sandwiching the whole thing together solved all my movement problems related to the x and y travels.