Been experiencing an issue while pocketing in which the Z - Axis has a very inconsistent pocket finish. The inconsistency is not limited to any particular portion of the the board, which leads me to believe its not due to an uneven waste board.

The best way I can describe the issue is gouges in certain areas, which then disappear after some time. I have included a specific example below.

Any thoughts would be greatly appreciated.

Here is a specific example as to the inconsistency

This is just one idea… Although your waste board might be flat, it is possible your x or y rail/gantrys are not parallel to the wateboard. I spent hours checking and tweaking my waste board for flatness only to realize a slight rise in the right side of my rails was the cause. I used a caliper measuring in several locations the distance from the bottom of the Z plate to the board. the two parallel Y rails we off too. Since there really is no way to adjust this I found that there was just enough (barely) play between the endplates and the makerslide combined with tweaking the orientation of the V-wheels/eccentric nuts. Then in one spot I actually shimmed my wasteboard above level to match the rise in the rail. Hope this helps, good luck!

Thanks guys, ima play around with this today and revert back with my results later in the evening

So I reset all the set screws with blue locktight, and checked the alignment of my wasteboard with the X/Y rails, but the issue continues to persist

Interesting thing is, even if i scale the design up/down, or change my start position (relative to the waste board), I still get the z-axis gouges in similar locations on the design. Any thoughts?

Friend of mine recommended potentially getting an anti backlash nut, has anyone experimented with this before?

I have the same problem with my Z-axis, when Z is raised (like to go around letters) and lowered back to cutting depth. It’s really odd, because it does it for one or two rows (like in your picture), then it goes back to the correct depth. When I’m doing a pocket cut, like just cutting out a square or rectangle and the Z-axis doesn’t have to change, the cut is perfect.

I’ve noticed it’ll do it whether doing a conventional cut or raster cut. Part of me thinks maybe the board is bending/warping the more material is cut out, but you would think there would be more occurrences of inconsistent cutting.

@Tarry_Brindle: Exactly, you described the issue perfectly and Im having exactly the same issue. The issue only occurs when you lift and re-lower and the Z, and it eventually goes back to the correct depth. For that reason, im hypothesizing that maybe a backlash nut may help, as there may be some slack in the lead screw?

@RobertCanning: Thanks for the feedback, didn’t think to check for this. Hoping to have a chance to investigate later this evening.

use the jog controls to raise the spindle 2mm

Move the spindle to near the middle of your wasteboard and then lower with jog controls 2mm
the bit should just be touching the top of the wasteboard, If it is pressing into the board then something is not level

Raise the spindle 2mm again and Move the spindle to each of the other 3 corners of the wasteboard and then lower 2mm in each spot checking to see if it is just touching correctly.

If it touches perfectly at each spot when you lower it 2mm then everything is pretty level which means you have a problem with your Z axis missing steps.

If it does not touch correctly at each spot on the wasteboard then you need to level it (or add a sacrificial wasteboard and then skim a mm off of it with a large fly cutter.

Allen, do you think it is possible for RF interference to cause extra steps? The reason I ask is that on some projects, the majority of the project is carved at the proper depth, but then a random “extra” step is thrown in causing the bit to carve a little deeper than expected. It’s just baffling because it seems like the machine corrects itself, but it then might do it again at a later pass. Here’s an example of what I am talking about…sorry for the poor picture quality: 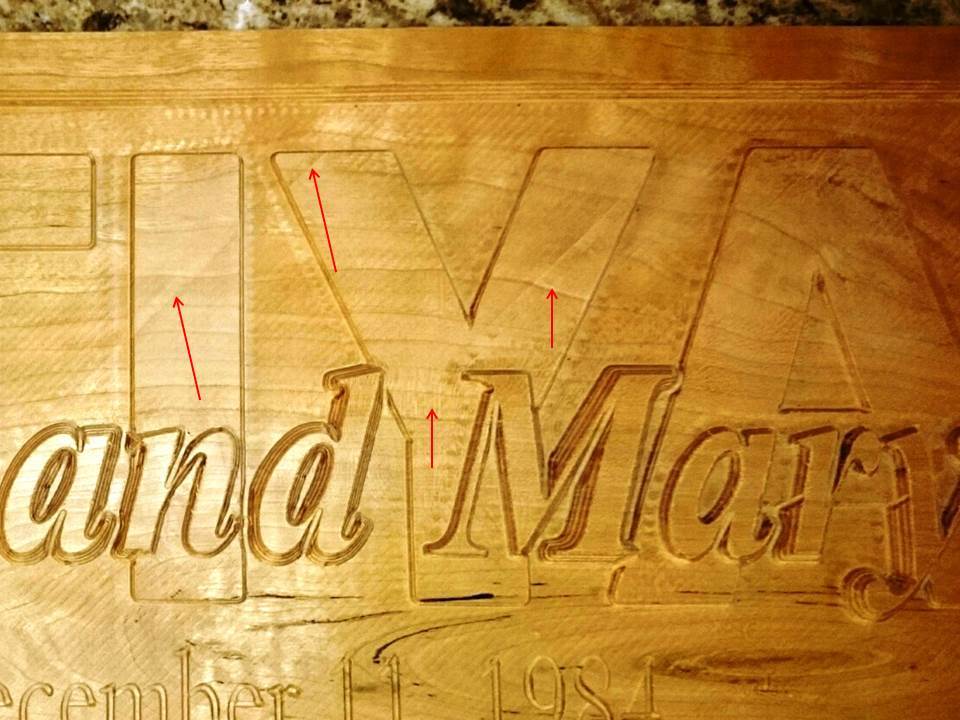 This was carved about a month ago. I used Aspire to design, and sent to x-carve with UGS. The flat depth carve was set on a 45 degree raster, starting in the bottom right hand corner of the wood. Most passes were what was to be expected, but at the arrows you can see where the carve was a little deeper than the rest, and it did this 3 times on the entire project…but the rest of the rows were at proper depth. I took the photo after I had tried sanding the higher areas to blend in with the “extra stepped” row. Your thoughts?

Here’s another project that I did a while back that is closer to what Jawad might also be experiencing: 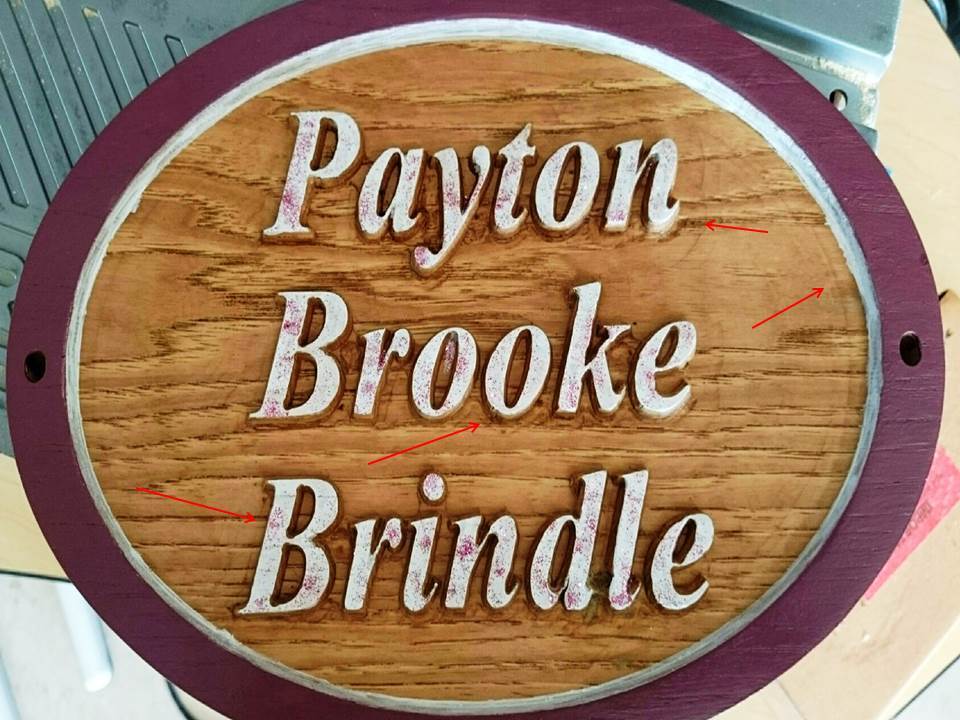 Extra stepping (2).jpg960×720 105 KB
The areas around all of the letters were mysteriously cut deeper than most of the other flat area…with a couple exceptions that you can probably see.
AllenMassey January 26, 2016, 7:53pm #12

A lot of people were reporting electrical interference problems with the 300W quiet spindle that Inventables provided with the early kits. That spindle created a lot of interference and it got worse as the bearings failed.

I have not seen any issues with the Dewalt 611.

On the pic I just uploaded with my daughter’s name, I am almost certain I was using the 300W quiet spindle…which leads me to believe that that spindle induced a lot of the errors.

On the first pic with the stacked text, I used (and currently still use) a Craftsman Trim router spindle. After my first 300W died, I switched to the Craftsman since it runs of 19.2v, so I just hooked it right up to the old 24v connectors. It has well over 100 hours on it, and still runs like a champ. I will eventually upgrade to an air cooled spindle/VFD combo.

I was having a similar issue with one of my cuts. The weird thing was the “pencil lines” would happen in the same place every time.
I took a hard look at the g-code and it was not in the code.
So I watched my spindle very carefully as it cut. In my case it turned out to be flex in the gantry.
As the bit would move towards me the gantry would twist, angling the bit and changing its depth. As it would move away it would straighten out, changing it’s length again.
Doing the stiffening mod eliminated this.

I think one way you could test your system would be to rotate the design 90 deg.
If it is some kind of mechanical issue with the X or Y axis is should change location when rotated.
If it was with the Z axis it should remain in the same spot?

I did the stiffening mod a few months ago, but I know there is still play/twist at the spindle because of the universal mount I’m using. I’ll have to watch the carvings more closely to see if it does like you mentioned with the bit angling. Hopefully in the long run my problems will be solved with the spindle/mount upgrade. Thanks for the feedback!

Many thanks everyone for all the feedback, super helpful!

@AaronMatthews: Will rotate the design 90 degrees and give this a shot, excellent idea. Do you happen to have a link to stiffening mod? Would like to try it

You can go with the “steel spar” mod: X-Axis Stiffening Modification

I did the steel spar mod, but both mods have positive reviews, so it’s more up to what you prefer. If I had to do it over again, I would try to 30-minute mod first and see how it goes.

I’ve been having this very same problem for awhile now and it is very frustrating.My Z-axis is 90 degrees to the wasteboard in both directions. I’ve also dont the 30 minute stiffening mod, but for me it didn’t seem to stiffen the X-axis that much, so i’m not sure if thats the problem because it used to cut pockets perfectly. I’m going to check to see if the Y-axis rails are the same height from the wasteboard as well and check my Z-axis acme screw and nut on top, See how that goes.

@AaronMatthews, what you said resonates with me. I just tested my set up as follows:
(1) holding the X gantry fixed, I pushed on the router bit in the positive Y direction (which has the effect of twisting the entire Z-gantry forward and rotating the the bit down)
(2) I then lowered the bit by hand to an aluminum surface until it just touched (checked with the audible continuity checker on my multimeter).
(3) again holding the X gantry fixed, I pulled the router bit toward me in the -Y direction, tipping the Z gantry back and raising the bit away from the work surface.
(4) the bit did not settle back to its original position, just touching the aluminum plate, it remained raised. I was able to pass a ~.35 mm feeler gauge between the bit and the aluminum.

So it seems to me that (at least for my machine), the bit can settle at multiple depths as it’s being pushed/pulled through a workpiece in the Y direction. The twisting is enough to be very visible in the surface finish of a pocket, but it’s too subtle to be able to track down effectively-- I can’t pinpoint why the machine is settling into these different modes or how to fix it. Anyone have ideas?

Part of it is coming form the Z axis assembly.

But many people have reported good results replacing their Z axis. Either with a lineal rod setup from e-bay or a c-beam setup for open builds.
When disassembling mine the lower adjustable v wheel was really messed up on my z axis. The bracket hole damaged, the screw bent.

And there are roomers of a single gantry rail upgrade from inventables may be in the works.

It’s a long shot, but see if when you grab your router, whether you can flex the carriage. My v wheels started to loosen on it and I am getting little lines in the bottoms of my pockets too.